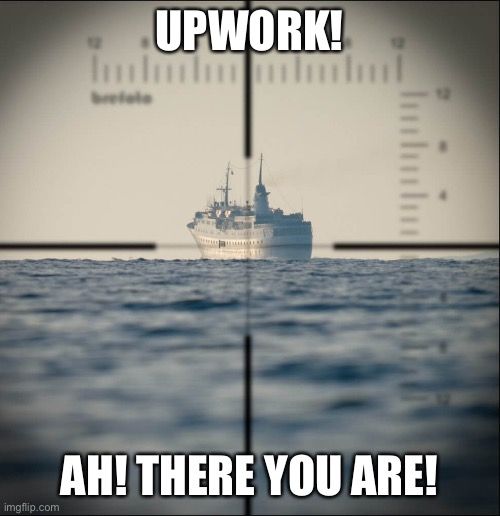 If you think that a small story can't make a big splash, then, good luck with that!

It All Began With The Pretty Obvious Prediction

Back in August of 2019, I published a story on Hacker Noon with an attractive title about an unattractive topic - Upwork Q2 financial results. Yeah, I know. Boring!

For what is worth, I did notice something highly unusual about (now, a former) Upwork's CEO - Stephane Kasriel. Here's the picture that's not worth only a million words, but also millions of dollars, literally: 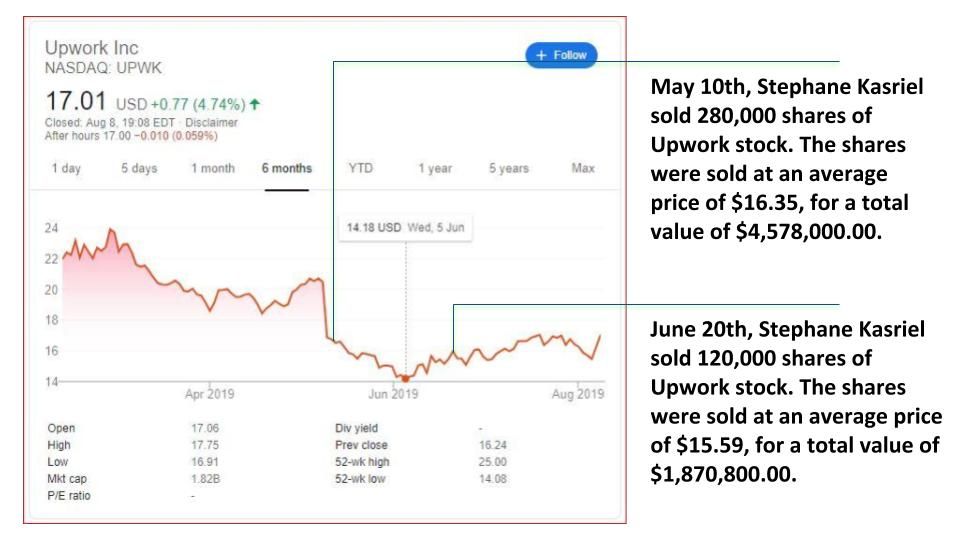 And, here's me stating the obvious:

I did my very best to pinpoint the exact moment Stephane Kasriel sold the jaw-dropping number of 280,000 shares on the attached illustration. Someone may say, the timing was perfect. This transaction took place "in the middle of fall" of Upwork's stocks before they hit the record low on June 5th.

Then, two weeks later, as soon as Upwork's stocks slightly recovered, Stephane Kasriel sold another quantity of shares (120,000). This time the timing wasn't perfect, but from a broker's point of view, it was still good enough to get the most out of your stocks.

With one of my article's subheadings, I predicted the inevitable:

O Captain! My Captain! Why Are You Leaving Your Ship That Still Floats?

On the exact same day, the 9th of August, that this article was published, but a few months later, the 9th of December, Stephane Kasriel stepped down as Upwork's CEO.

So, I asked myself, what would happen if I do a few more of these pinpointing activities, but with a different protagonist and parameters? And voila, my extremely controversial theory was born.

If I can predict, can I actually impact Upwork's business with my stories? Let's see.

My Stories Go Up - Upwork Stock Prices Come Down! 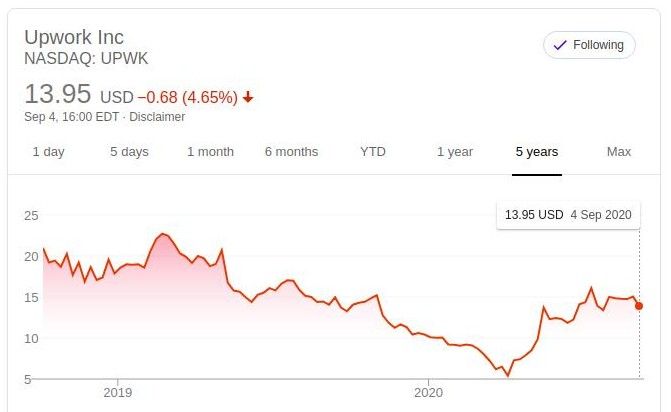 Now, let's choose a story or two, and pinpoint their publishing dates on this chart.

I would like to begin with my story about Upwork Connects. On May 20th, Upwork decided that these Connects are no longer free. Now, I don't expect and neither should you, hopefully and understandably, that my story impacts the stock market, the same day it gets published. Is it OK and fair to give a story some reasonable amount of time to "kick in?" Let it be the story #1, we're going to evaluate for the sake of my "experiment." 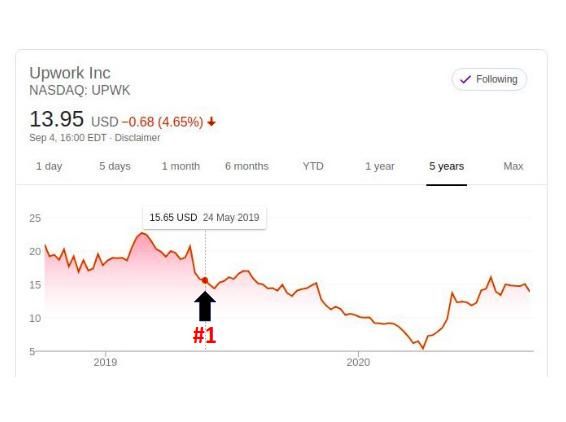 I marked my story #1 with red color because it had no impact. Upwork stock prices were already on their way down before and after this story was published, so no link, no proof.

But, then, during the last days of July, I published a story about the so-called "inspirational Upwork stories." For this story #2, I would like to use green color because after it was published, Upwork stock prices slide down for the rest of the summer of 2019. 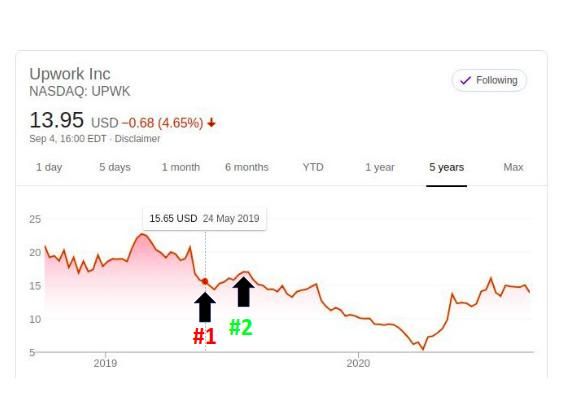 Then, on September 22nd, I published my most viewed and shared Hacker Noon story, where I compared the fees of the top five freelance platforms. Unfortunately for me, and luckily for Upwork, this story hit the recovery period for Upwork stock prices that lasted throughout the end of October. So, it's red again, for my story #3. 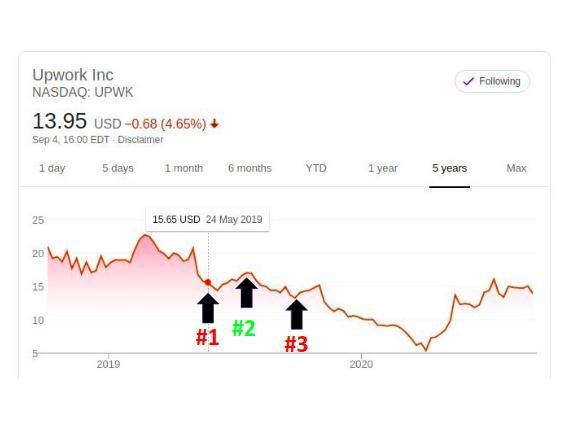 Then, at the very beginning of November, I had a happy birthday story ready for Upwork. Just a quick reminder. This was Upwork's first anniversary as a public company. So, we have story #4 in green because Upwork stock prices fell off a cliff at the end of 2019. 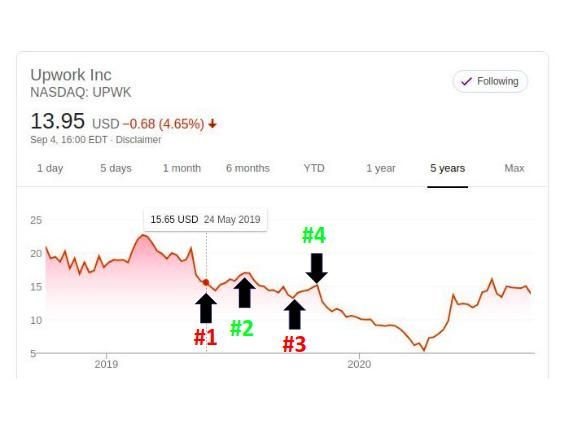 We will never know for sure, but during the last week of November, Upwork showed some willingness to stop the free fall of its stock prices. At least, according to the NASDAQ chart, I've been using a lot. At the same time, I published two of my most controversial stories in 2019. The first story was about the notorious Upwork fake review "farms." The second story asked a legit question: Is Upwork the next WeWork?

I mean, those stories were really good and eye-opening for Hacker Noon readers. I can't say the same for Upwork stock prices that probably made investors and clients feel bad. So, I believe that these stories #5 and #6 qualify for the green zone. 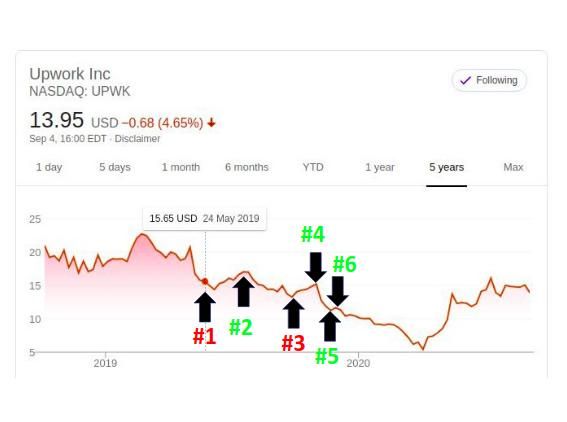 My Research Was Systematic Even During The Pandemic

At the beginning of April 2020, Upwork stock prices hit the all-time low value. In the weeks to follow, based on the information obtained from an Upwork's insider, I wrote a series of stories about the systematic and intentional posting of fake jobs. These stories proved to be true. So, Upwork admitted its "unintentional wrongdoing" and offered to refund freelancers. For the very first time in my Hacker Noon writing history, my story had to have a disclaimer.

I just knew that I was on something big. I also documented the biggest "purge" of freelance accounts in Upwork's history with my story. The third and final story of my Upwork fake jobs "trilogy" dealt with the aftermath of my findings.

I really thought that Upwork couldn't survive the perfect storm, which combined the poorest performance at the stock market and shocking discoveries of my Hacker Noon stories. It turned out that the COVID situation actually saved Upwork. So, my best stories ever marked the sharpest and most miraculous recovery of Upwork stock prices in 2020, instead. 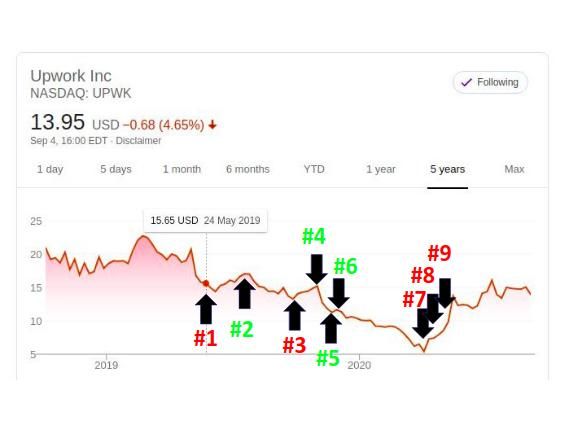 What's fair is fair. I have proven that my stories have little or no effect at all when it comes to Upwork stock prices. In the meantime, I published two more stories. One was about the disturbing conspiracy theory about the "Golden Million" Upwork freelancers. The other one was deeply personal with the straight to the point title: Upwork vs. Nebojsa Todorovic.

And, I was ready to let it go. I clearly bit off with my writing more than I could possibly chew. Upwork is just too big to fail. Time to move on.

Then, I don't remember how and why, but I stumbled upon Upwork's profile on Crunchbase. So what?

Well, every company has the Recent News & Activity section on Crunchbase. Guess what I've found in Upwork's? Next to all those shiny Forbes, Bloomberg, Business Insider, Fortune stories about Upwork, you can see my raw Hacker Noon stories. 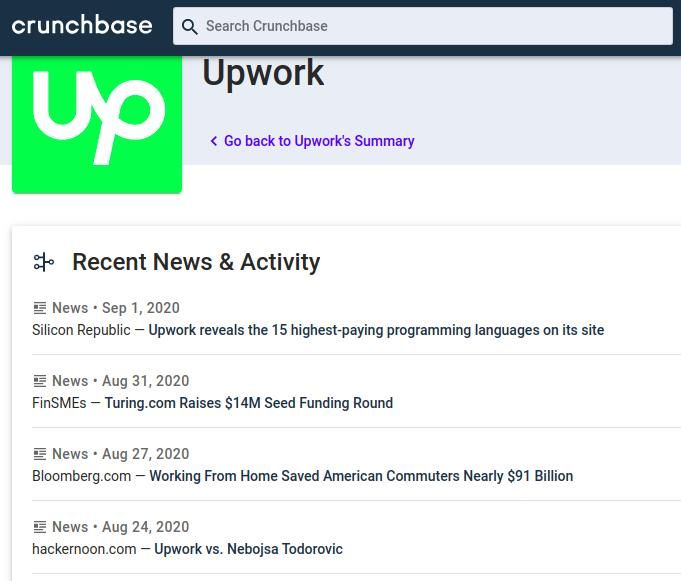 So, how about that? Imagine all those wolves of Wall Street who are checking out this section in their fancy suits and on their fancy devices. It's all uber shiny and green about Upwork. And then, you see one of my Hacker Noon articles.

How can you resist? Which one you're going to read first? All those polished, but boring and faceless articles, or the one you can't ignore because it looks as if it just crashed through like a meteorite from another planet. From the Moon. Hacker Noon.

Ah, just one more thing. I'm this year's nominee for the most handsome Hacker Noon writer. Here's the voting link for those who appreciate controversy, and support writing without regrets and mercy. 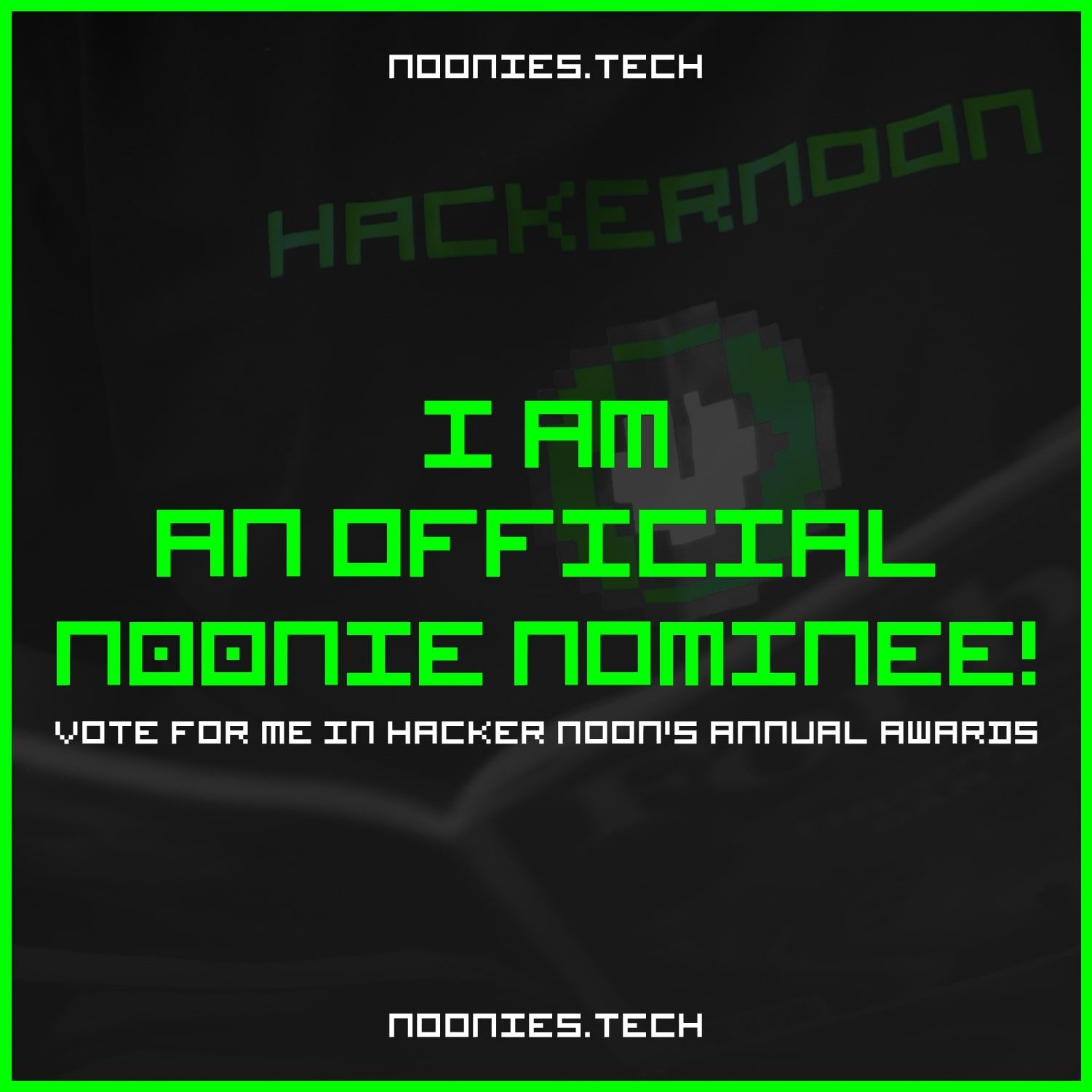