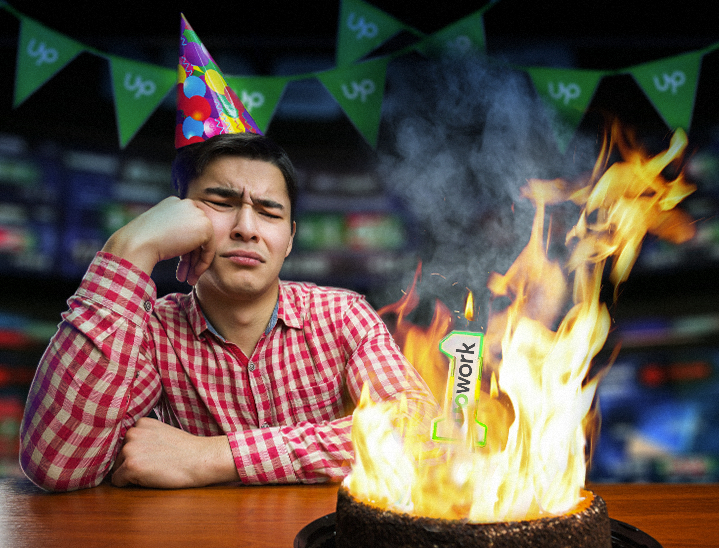 Upwork has been around for more than a year. So, what are you talking about? The first birthday?! It doesn’t make any sense.

One lovely day at the beginning of October in 2018, Upwork made its NASDAQ debut. As you can imagine, it was all about happy faces smiling ear-to-ear and confetti.

So, what happened to a birthday cake one year later? It's a big deal to mark your very first year as a public company, isn't it? Honestly, I expected nothing less in terms of happy faces and confetti.

Nothing. No party. No birthday cake. Only the deafening silence.

Have you ever skipped your own birthday party? Well, I did. Why?

Well, let's just say that I wasn't in the mood. I had a terrible year, and the last thing I needed was another reminder of how awful it was. I made it perfectly clear to my family and friends that a birthday party wasn't my preferred option that year.

So, what could possibly spoil Upwork’s mood after one hell of a start at the stock market?

I will let the numbers do all the talking here. 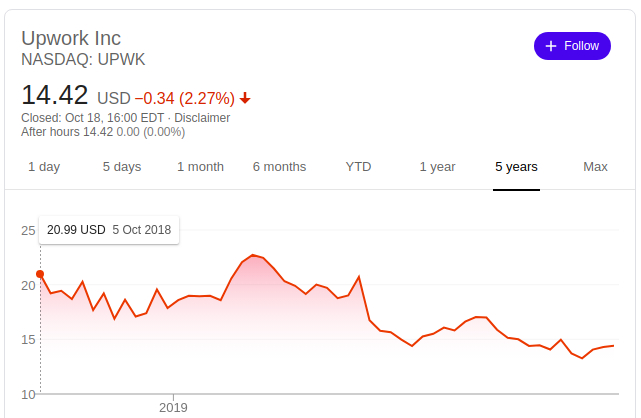 The first screenshot gives you information about the initial Upwork's stock price. Upwork just couldn't wish for a better start as a public company.

...shares were priced at $15 before the opening bell by investors, a significant uptick from the company’s revised projection of $12 to $14, which was already an increase from its original $10 to $12 target…

Upwork’s shares opened for more than 50% than expected and planned, even in the most optimistic scenarios. 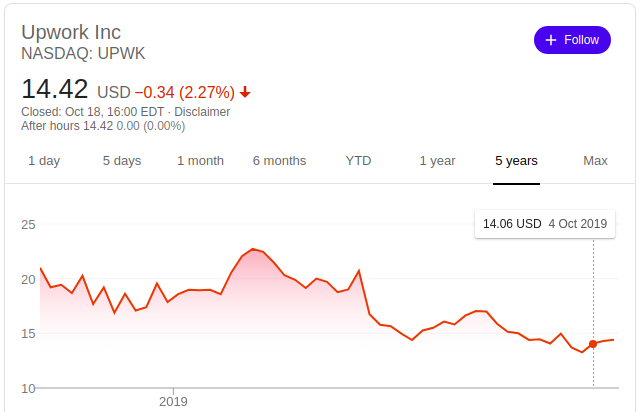 Here’s the second screenshot. One year later, give it or take a few days, Upwork’s stock prices dropped for more than 50%. Or, they reached their initial (real) forecasted price.

Upwork's glass is half empty or half full. It depends on how you look at and feel about Upwork's stock market roller coaster.

Now, it makes more sense why Upwork isn’t exactly in the celebration mood. Can you blame them?

No Cake, But There’s A Birthday Video

Here’s something I saw on Twitter, first. I had to watch it more than once. The symbolism of this video’s publishing date was both irresistible and unavoidable. Upwork’s CEO Stephane Kasriel gave an interview to CNBC’s “The Exchange.” It was October 4th. Remember? The "unofficial" birthday of Upwork's as a public company.

Here’s a link to the full video. So, what was so special about it? 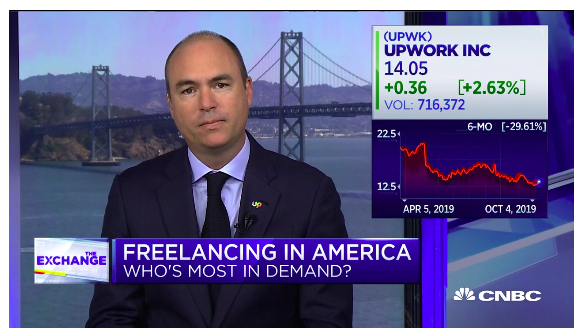 Here’s a spoiler alert. Jump right to 1:45 into the interview. Why?

While Mr. Kasriel was talking about the bright future of the freelance economy in the upper right corner, you could see Upwork's NASDAQ performance in the last six months. The red line of Upwork's stock prices was very thin, with a drop of 29.69%.

The most interesting and amusing part for me was the graph itself, which begins with a presentation of three-month stock market performance. Then, it switches to a period of the last six months. Then, just when you get ready to see "YR TO DATE," this graph suddenly disappears.

I was patient enough to continue watching the interview. Upwork’s first year as a public company was (spontaneously) illustrated with this graph. 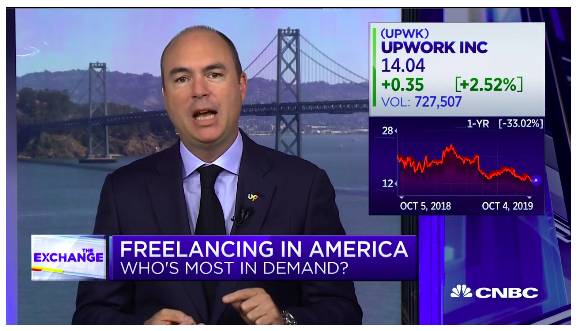 Now, I'm a fair player. We can say the same for the CNBC team that prepared this interview. They were kind enough to share one optimistic green line. A week before the interview, Upwork's stock prices recovered a bit. For more than 6% to be precise. 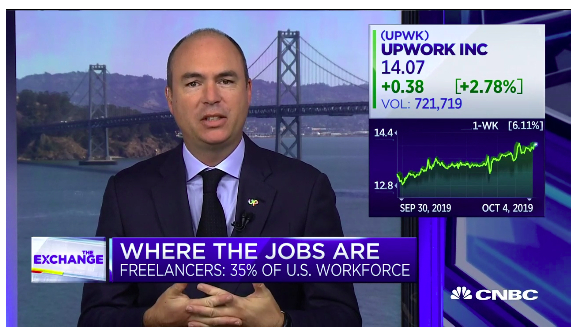 I don't know for sure whether or not Mr. Kasriel was aware that the stock market graph followed him throughout the interview. Maybe it's just me, but the expressions on his face may or may not have something to do with the numbers displayed at particular moments.

If there were an Upwork’s birthday party to mark the first year as a public company, then NASDAQ would have to bring the biggest birthday present. Why?

NASDAQ marketing team owe it so much to hard-working and talented freelancers they hired on Upwork.

With a small internal team and a handful of freelancers, their initial efforts increased Nasdaq’s social followers from 20K to over a million.

You can read the whole story here how Upwork’s freelancers managed to completely reshape the NASDAQ’s marketing perspective and social media exposure.

When Machiz and Gonzalez planned to shoot a show for South by Southwest, they built the entire production crew through the Upwork platform. And had them set up before Machiz arrived. For larger crews, they may hire an agency through Upwork to take care of bringing the entire crew together.

This is a great example and confirmation of how the businesses, even the most complex and demanding ones, can benefit a lot from working with freelancers. Now, the only trouble is that NASDAQ couldn't return a favor and do something for the price of Upwork's shares.

Stock markets may move in mysterious and quite unpredictable ways, but they obey the laws of demand and supply. You can't do your marketing magic on your stock prices. Sooner or later, you have to face and accept reality.

The moment of truth for Upwork took place one year after their NASDAQ debut. Upwork’s stock prices eventually reached the projected level (2018), and for the last six months, they keep failing to surprise us with some good news.

After Each Birthday We’re One Year Older And Hopefully Wiser

I already told you that I skipped one of my own birthday parties. Now, it's time to tell you that I regret it. I realized that birthdays aren't and shouldn't be only about cakes, gifts, and parties. Above all, this is a special day when you can make your birthday wish. I know it sounds silly, but let's not spoil the mood.

Upwork missed a birthday wish this year. So, I volunteer to do it instead of Upwork. I wish that the stock market situation improves in Upwork’s case for the sake of all freelancers and the freelance industry itself. The way things are right now, we’re facing both serious and realistic scenario where not only we may skip the second birthday of Upwork as a public company, but what’s even worse, our birthday platform may not be around.

What’s going to happen if Upwork’s stock prices fail to recover and continue to fall? Well, that’s a dreadful thought which can ruin any freelancer’s birthday, isn’t it?

Related Stories
Subject Matter
Partner with us for Digital Product Development by @AWH
#promoted
Is Payoneer Safe Again? - Payoneer Avengers vs. Wirecard Thanos by @nebojsa.todorovic
#payoneer
Are Cybersecurity Careers Future Proof? by @roger-huang
#cybersecurity
How I Used Blitz JS To Take My Pet Project Into Production by @codechem
#mvp
Top 4 Stock Market APIs Of 2021 by @antoine
#api
SEMRush IPO Puts Digital Marketing in the Spotlight by @mikeyperes
#semrush
Numbers Don't Lie But They Are Easily Misinterpreted All The Time by @doublex
#statistics