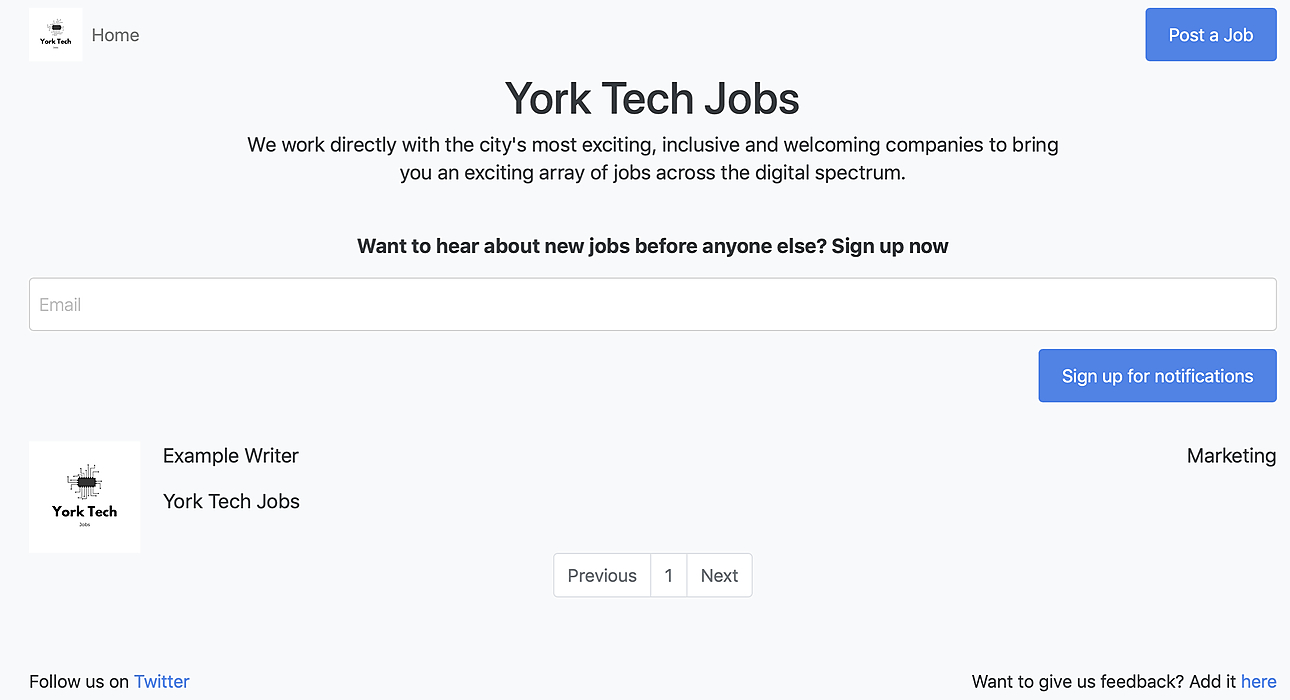 All you need is an idea, the right tools and an audience.

As someone who can’t code very well, I often have ideas that sound good on paper, but hard to execute on in practice unless I’m willing to pay a developer to help me out.

I’ve been interested in creating inclusive hiring platforms and processes for a good few years now. I’ve even spoken in front of 1400 people about what organisations can do to improve their hiring for marginalised identities at the Lead Developer London. This is exactly where any business idea should start out — driven by passion and an interesting problem that requires a solution.

As I said above though, while I have been building up a fair amount of knowledge around the issue and potential solutions, I couldn’t see a way of getting started on building anything.

I was also conscious that it’s foolish to develop an end solution without feedback.

I was desperate for the ability to refine, test and release my ideas rapidly and iteratively in short development cycles.

If you haven’t come across the term before, a “no code” or “low code” platform is essentially software that helps write software, without the need for a developer.

There are a growing number of platforms out there that provide a visual software interface that allows you to create applications through simple drag and drop, import and integration functionality.

There are undoubtedly limitations of these platforms, as they aren’t geared up to handle complex functionalities or database structures.

However if you’re looking to develop a web application or mobile app with simple functionality, you will undoubtedly be able to find a tool that can help you get up and running.

Maker pad have an excellent list to start off with.

What this essentially means is that you, yes you, no longer have an excuse holding you back from developing an MVP for your idea.

I’m based here in York, in the north of the UK and am proud to be part of an emerging tech community that’s attracting serious talent from across the country.

One of the issues I’ve found in the past as a job seeker in York is the fact that there is no canonical source for tech jobs. Yes you can look on job listings sites etc, but you have to trawl through a lot of crap.

Also as a woman in tech, It’s also extremely important to me that an employer has a positive attitude towards diversity and actively encourages candidates from under-represented groups. This is a hard thing to tell from Indeed or a job aggregate site.

That’s where the idea for York Tech Jobs came. Yes, it’s not exactly the grand all singing all-dancing platform I eventually want to build, but getting it up and running means that I have a test-bed for some of my wider ideas around inclusive hiring platforms.

I made an MVP of my larger idea and combined it with an MVP for the platform.

After having a good look through the low/no code platforms currently on the market, I decided to build my idea on Boundless Labs, one of the newer entrants to the market.

While it’s certainly risky to choose an emerging platform, I liked the idea of being an early adopter. I’ve also found the support provided excellent, as the founders are on-hand to answer any questions.

After I chose the platform, my next steps were to get to grip with what was possible.

The first step in actually building York Tech Jobs was to define the user stories I wanted the platform to cater for.

Creating this list gave me a solid idea of the functionality I would need and how it would ideally be structured.

Once my list of user stories was complete, I was ready to dive into the build. This included creating all the pages the platform would need, alongside creating the database structure and functionality present on each page.

This whole process took a good few hours, as there was a lot of tinkering about on my end trying to get everything working properly. I also got stuck on a few things where I had a good idea of what needed to happen, but not how to do it on Boundless.

This was generally resolved through messing about and thinking through the solution logically.

As I wanted to come out with a revenue-ready platform, there were a number of integrations I would need:

As I’ve used all of these platforms in the past, it was a fairly painless process to get everything up and running. Thank god for Zapier.

One everything had been hooked up and created, it was then time to test the functionality with some dummy data.

I used my user stories to act as a testing checklist and went through every story to check whether it was achievable or not.

Once I was happy the platform and all integrations were working as expected, it was time to release the whole thing into the wild.

I initially decided to send it across to a number of people from my local community to get their feedback.

This was invaluable, as they picked up on a few bits I had missed and also provided some ideas for future functionality that I’ve added into my product backlog.

I also decided to make a Twitter account to introduce the idea to my local market. This was very useful as I could then gauge the reaction of my intended audience to my concept.

On the whole people were very positive, though one person did say they had been “working on a similar idea for over a year” themselves and seemed pretty pissed I had beat them to it…

This is what makes me so excited about low/no code tools, the fact that I can spend a Sunday afternoon building something that is ready for market validation within a few hours.

I’ll be the first person to admit that what I’ve built isn’t perfect, but it’s a foundation point, a stepping stone for what I have planned next.

Since going public I’ve even had a few people contact me saying they will be customers as soon as I fix a few niggling bugs.

I literally built a business in an afternoon and so can you.

What are you waiting for?

Agile Marketing: How to Run a Marketing Team Using the Scrum Framework