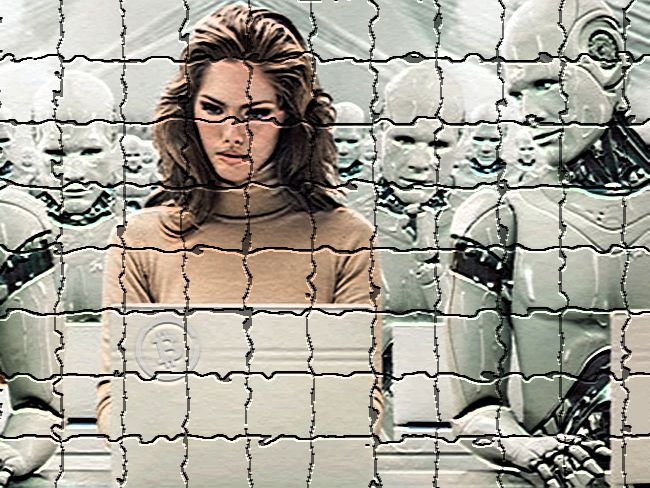 Bitcoin not only introduced the concepts of blockchain and decentralized cryptocurrencies to the internet, but also demonstrated that organizational structure, and capital formation can be accomplished through the operation of computer code alone. Bitcoin’s blockchain software automatically compensates anyone who records a new block on the chain, using is native reward system, confusingly also labelled bitcoin (it is good practice to use the lower case 'b' to discern the coin from the blockchain's name). As of today, each new block entry is compensated with 6.25 bitcoin — that's currently worth $360,000.

While the Bitcoin blockchain software is open-source code maintained by developers volunteering their time, even these volunteers have limited power over the network’s functions and evolution. All changes to the software’s code must be adopted by a supermajority of Bitcoin software operators in order to become effective on the network. Today these nodr operators are distributed over 105 countries, maintaining more than 10,000 Bitcoin blockchain nodes. Many of these nodes are comprised of data centers filled with industrial-grade hardware, making a shutdown of the Bitcoin blockchain almost as unlikely as a failure of the internet itself.

In essence, the Bitcoin blockchain created the first Decentralized Autonomous Organization (DAO): an organization that is solely operated by rules encoded as computer programs anchored to the blockchain. The latter function is referred to as smart contract and has since been extended by several other blockchains, including — most notably — Ethereum. Unlike Bitcoin, which set out to create "digital cash," Ethereum.org initially described ether as a necessary element — a fuel — for operating the distributed application platform Ethereum, albeit changing the the vernacular of the site over time to reflect its growing use case for decentralized financial developments.

An externality of the efficiency of corporations is the centralization of services benefitting from scale and network effects. This concentration notably effects access to the internet and the World Wide Web. The entry point to the latter has arguably been monopolized by a single for-profit entity: Google. The reported mission of the company is “to organize the world's information and make it universally accessible and useful.” Given the for-profit and publicly traded status of its parent company, Alphabet Inc., this motto must also align with the need to increase shareholder value. While the company’s founders in their initial paper describing their search engine argued that “the goals of the advertising business model do not always correspond to providing quality search to users,” this was indeed the exact business model Google launched two years after its incorporation date.

While this statement does not identify who would find the delivered online advertising relevant, click-through statistics for Google’s AdWords program consistently suggest that users generally do not find these messages relevant. The relevance of their online advertising can therefore mostly be seen in Google’s bottom line, which reported a staggering $146.9 billion in advertising revenue in 2020  alone, accounting for more than 85% of the company’s revenues.

As the Google example demonstrates, commercial interests influence and sway development. Consequently, the potential of connected systems and connected knowledge has been underutilized and has halted progress as many internet users seem to have accepted a marketing-driven presentation layer — essentially commercial — as the status quo. Misalignment of interests between shareholders, operators, users and customers – a legacy of the industrial revolution codified in for-profit corporations – has created an environment of broken promises that could be addressed by smart contract systems like DACs, realigning the interest of users, reducing friction and removing middlemen.

The State Of For-Profit Corporations

While corporations can generally be formed for any lawful business or purpose, it is largely understood that the main purpose of a corporation is the creation of profits for its owners. The concept that a company’s primary objective is to increase the wealth of its shareholders by paying dividends or causing stock prices to rise has been widely criticized. While the discussion is usually limited to the problem of conflicts of interest between a company's management and its stockholders; more recently it also focuses on negative externalities of corporate activity such as pollution of the environment, and polarization of internet users for the improvement of corporate key performance indicators (i.e. 'time-on-site).

Profit From Customers And Products

Consumers tolerate having their online activity, and spending behavior monitored by third parties for the sake of making purchases on credit. Users of social media sites accept being exposed to increasingly targeted advertising so that they may interact with friends and family online. However, these groups of people don't count as customers of these organizations. From the perspective of these companies, consumers and users are the product that is being sold to lending businesses and advertisers.

Similar misalignment of interests can be observed in many for-profit endeavors. The far-removed values of corporations from the people they purport to serve was recently brought to light through the breach of Equifax’s consumer database and Facebook’s user data overshare to the political consulting firm Cambridge Analytica. The misused or stolen data was not that of the companies’ clients but the data of general users and consumers. Both companies used unsecured data policies and centralized databases that gave the subjects little knowledge or control over how their information was handled or stored.

The ability to collaborate is the likely main cause for human's success as a species. Comparative psychological research with children and our closest primate relatives is starting to elucidate the phylogenetic roots as well as the unique psychological mechanisms that support human cooperative behavior.

For mutually beneficial collaboration, individuals need (1) cognitive mechanisms to coordinate actions with partners and (2) mechanisms to distribute the acquired resources in a way that incentivizes partners to continue collaborating.

Capitalism, in form of private ownership and resources allocated by markets, remains a flexible, and reliable system for driving human prosperity and generally enhancing quality of life. As of today, corporations are the primary organizing principle in capitalist societies, providing employment, goods and services to most citizens. Blockchain-based systems have opened the door for a new paradigm: the Decentralized Autonomous Organization (DAO). DAOs have the potential to challenge the current economic structures by aligning the interests of operators, shareholders, customers and maybe even the environment.

Note: I published parts of this article on Forbes in July 2018.