What to Learn From GameStop’s Response to COVID-19 Pandemic

Studying the corporate reaction to the COVID-19 pandemic can be viewed as an exercise in clear messaging when talking to your community. GameStop had the chance to show some leadership in the face of a crisis, to lead the way in supporting digital downloads and provide much-needed entertainment during this time of social distancing -- but they chose to support their brick-and-mortar stores instead, instructing employees to keep the retail outlets open even if police come to shut them down.

So why did GameStop get it so very wrong? And what will it mean for the company in the long run?

Remaining Consistently Behind the Curve

It’s understandable that GameStop saw the outbreak as an opportunity. During lockdowns, stay-at-home orders, and social distancing the virtual worlds of a game like the new Animal Crossings: New Horizons seems like the perfect break from reality -- and a much-needed escape for gamers stuck at home.

We can expect corporations to look for ways to make money, even during a crisis -- if they can do so honestly and safely.

On March 13, GameStop spokespeople announced that customers are their top priority and they are complying with the WHO to keep customers and associates safe.

On March 19, Jason Schreier of Kotaku reported:  “The struggling video game retail chain GameStop told all of its stores this afternoon to stay open even in the event of state or city lockdowns to protect against the COVID-19 pandemic, emphasizing that it is “essential retail” alongside groceries and pharmacies and should, therefore, be exempt from enforced closures.

Comments on Twitter demonstrated the outrage of the public -- if GameStop was hoping for a groundswell of customers saying the stores are essential because they NEED their video games in this time of isolation, it just didn’t happen.

In fact, 4,200 people responded to the tweet and the overall tone of comments was less than supportive.

wasn’t just banking on the strength of new upcoming titles. YouTuber Camelot331 published a video on March 17 that leaked internal memos sent to him by GameStop employees indicating that company leadership planned to capitalize on the advantage of still being open for business during the pandemic while competitors have closed.

On March 19, GameStop revised its position with more specifics: 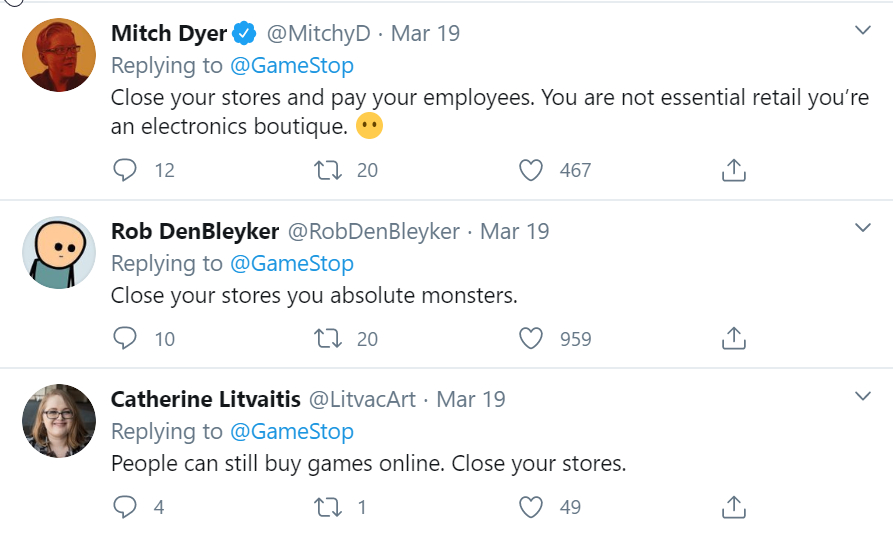 The power of bad faith

Meanwhile, Camelot331 and other YouTube commentators such as Cody Johnston from SomeMoreNews and Mutahar from SomeOrdinaryGamers began to pick up on statements of concern -- and outrage -- from GameStop employees.

I often advise clients that messaging needs to be based on facts. It usually gets a laugh, but I think it’s important to bear in mind. I believe it’s bad business to make promises, like stating that you will provide new disinfecting measures for your retail stores, when, in fact, you have no plan for following through.

And the backlash wasn’t just born from leaked memos. Concerned store managers and employees spoke out on social media. 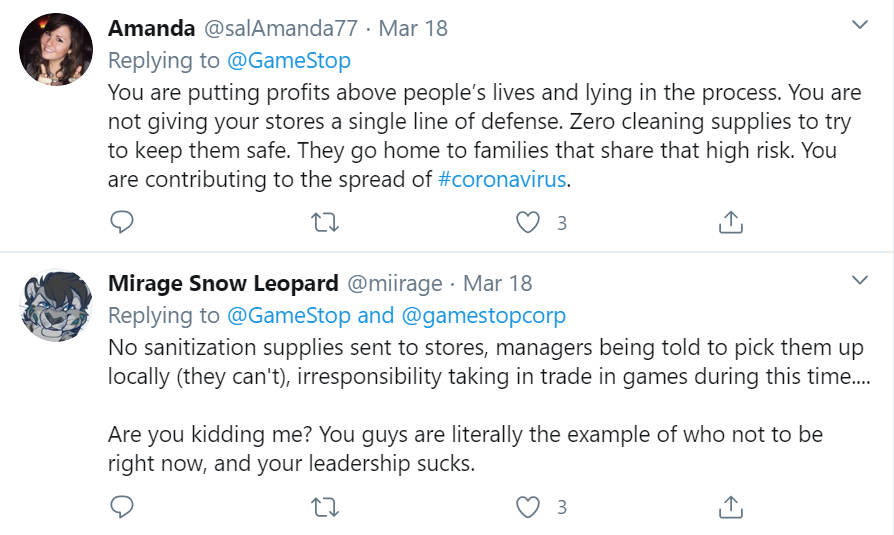 “District manager here... I can tell you this company is NOT taking the situation seriously.

Our regional call today was about taking more tech trades and "taking advantage" of the situation...

They will not shut down a store if they can avoid it. Even if an associate has come down with the virus, which has happened by the way. They expect associates from another location to come in, clean the location and re-open. This is mind-boggling.”

One employee said, “My colleagues and I are sharing a small bottle of hand sanitizer that was purchased through our own pockets as well as making as much usage out of a depleting bottle of All Purpose Cleaner. We were only just given permission to turn off console demos yesterday and my cleaning supplies have been back ordered for two months. As far as more immediate measures go, the stores in my area have received nothing.”

On March 22, GameStop relented, making an announcement that they were closing their stores to the public and moving to a curbside pickup and offering two weeks of paid vacation for employees impacted by the virus.

Will GameStop respawn its reputation?

If GameStop has made a miscalculation that has hurt their public image and made lots of very vocal people on social media angry, it hasn’t hurt their bottom line -- yet. Zack’s Equity Research stated: “Shares of GameStop Corp. GME increased roughly 10% during the after-market trading session on March 26. This upside can be attributed to the company’s positive earnings surprise during the fourth-quarter fiscal 2019, which follows a miss in the preceding two quarters. Further, management’s commentary that it is experiencing a positive impact on its business due to the coronavirus outbreak contributed to the stock’s upside.”

It remains to be seen if GameStop will suffer from long-term backlash in public opinion. It closed 321 stores last year and is already going the direction of Blockbuster -- an old business model being replaced by on-demand digital downloads and made obsolete. GameStop reportedly announced last week during its earnings call that it would be permanently closing over 300 stores in 2020.

But what strikes me, from over 20 years of doing PR, is the lost opportunity here for this already troubled brand.

According to its recent financial report: “Total global sales from continuing operations decreased 7.6% (decreased 6.2% in constant currency) to $3.1 billion, resulting in a consolidated comparable store sales increase of 1.4% (3.4% increase in the U.S. and 2.9% decrease internationally).” However, digital receipts increased 4.7% to $432.5 million

If GameStop had embraced its digital model at the beginning of the pandemic, closed stores and focused on safety in a sincere way, it could have reinforced the part of its business that is growing and sent a clear message to customers that games are an important part of their “socially distanced” lifestyle and GameStop as an enterprise cares about helping people play responsibly.