The Surging ETH Gas Fees  Could Dethrone UniSwap But What Are The Alternative? 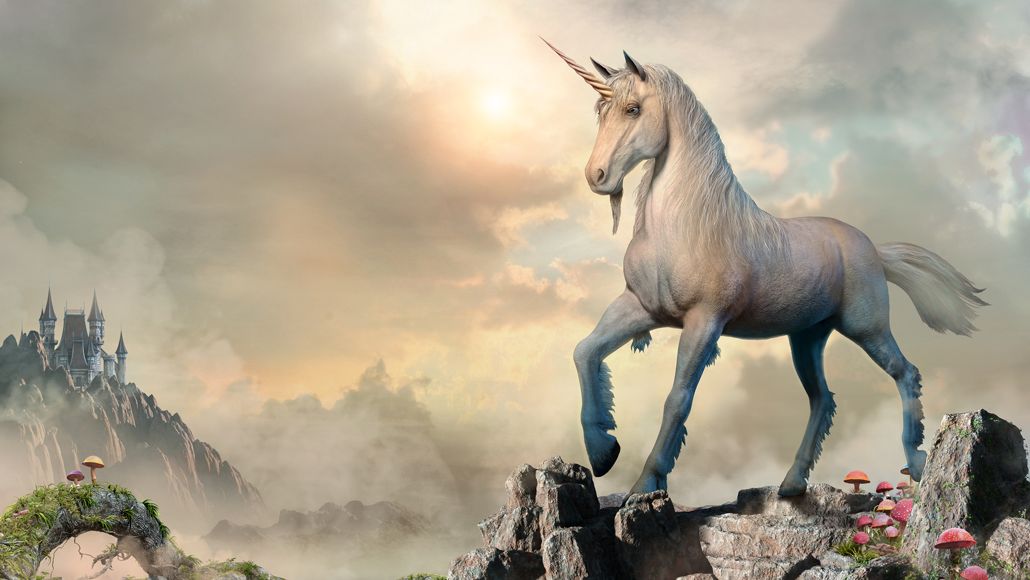 The current DeFi craze has caused a seismic shift within the crypto industry. Yield farmers and traders are exploiting the most of this current trend to maximize earning opportunities.

While profitable for many, it has resulted in a big problem for many other individuals- massive Ethereum Gas Fees. In this article, we tackle Uniswap, its recent drawbacks and some of the alternatives available in the market. 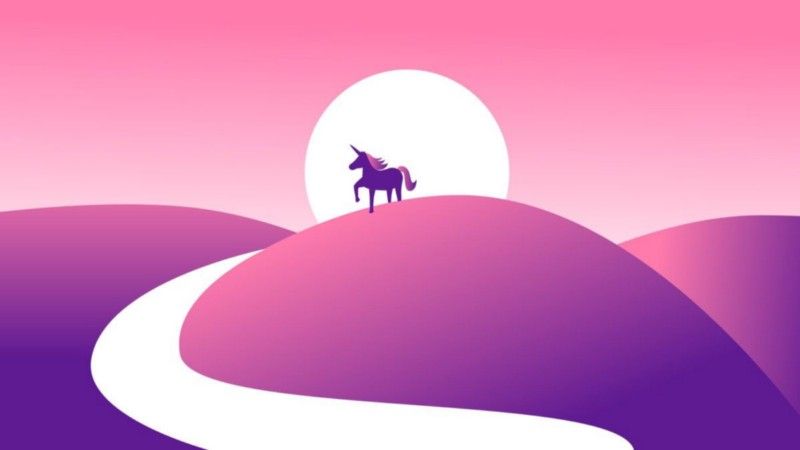 Uniswap is an Ethereum based exchange platform. The decentralized exchange has two smart contracts on the Ethereum platform. It also has a public, open-source front-end client.

The platform also allows you to contribute to liquidity pools of ERC20 tokens, where you can earn a commission from exchange fees charged on transactions.

How does Uniswap Work?

Uniswap is 100% on-chain. It eliminates the need for third parties in transactions. Therefore, anyone can access its full capabilities using web3 and embed Uniswap functionalities within their applications.

You can learn more about accessing Uniswap services here.

For the exchange to be successful, the platform requires a liquidity pool containing several types of ERC20 tokens. Users’ contribution to the liquidity pool creates a source of ERC20 tokens from which swapping is possible. Uniswap compensates its contributing members by giving the percentage of the transaction fee attracted by swapping. Each swap attracts a fee of 0.3%.

Uniswap can be summarized as quite simply a platform that allows you to swap any ERC20 token for ETH or other ERC 20 tokens, without any intermediaries, while allowing you to contribute to a liquidity pool where you earn from transfer fees. With such a description, it comes as no surprise that their popularity grew over time.

The popularity of DeFi in 2020 also contributed to Uniswap’s popularity. More people were trading and swapping tokens, which created a demand for efficient and affordable exchanges. Its impact in the market is enormous, clearly displayed by its recent surpassing of Coinbase Pro in trading volume. This milestone confirms its popularity and its status as one of the big players in the decentralized exchange market space.

While Uniswap’s recent success must be applauded, the dex still has major weaknesses and is increasingly exacerbated with continued volume spikes. The platform relies on the Ethereum network to execute its transactions. This exposes the platform to Ethereum’s weaknesses, as well as any change in Ethereum that may affect its business.

Recently, transactions have become expensive on the Ethereum network. Gas prices have increased significantly, leading to complaints by some of its users. For Uniswap users, this translates to higher prices for every transaction. It has resulted in users spending almost $7 million in ETH to complete their trades. What was once a redeeming quality for many cryptocurrency traders now becomes too expensive for its convenience.

Fortunately, the industry has other alternatives that offer the same core service of swapping tokens. Some of these services may be as good as or even better than Uniswap, depending on your trading needs.

Anyswap Could be The Best Placed Alternative 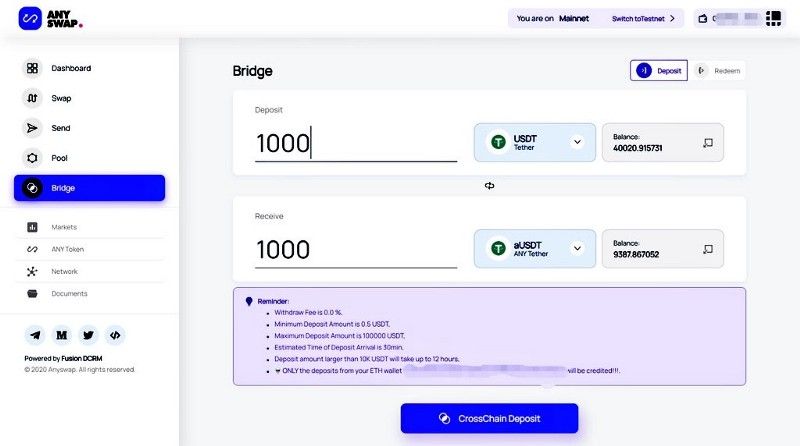 First on the list is Anyswap. The exchange platform is a relatively new open source cross-chain solution. The protocol provides seamless pricing and liquidity systems through its various automation.

Anyswap is constructed on Fusion (FSN) chain and it utilizes the Distributed Control Rights Management for effective coin swapping including BTC, ETH, ERC-20 tokens, among other tokens in a secure way.

The platform plans to host as many cryptocurrencies as possible on their platform to position them among the top swapping platforms in the decentralized industry.

The platform launched the ANY token, which is native to Fusion. The token will be used as a reward mechanism for users who utilize the distinctive features found on Anyswap. It will also be utilized as a tool for voting. Voting is crucial in the Anyswap ecosystem.

It determines which coins are listed on Anyswap. This creates an extra layer of security whereby the Anyswap community regulates the kind of tokens allowed in their ecosystem.

At their core, Anyswap and Uniswap are similar. Both are open-source platforms that are working towards offering a form of universal swapping solutions. However, some notable differences may sway those who are looking for Uniswap alternatives.

Anyswap charges seem more expensive at face value; however, the platform is the most rewarding to trade-in. For instance, of the 0.4% charged on each swap, 0.3% is channelled to the liquidity pool, and the remaining 0.1% goes to the Anyswap Company.

Further, there are other rewards, such as the Liquidity Rewards, which are awarded after about 24hrs with liquidity providers receiving 9900 ANY. Thus, in an overall view, Anyswap may be more rewarding despite charging a higher transaction fee.

Still, on price, we have to factor in the recent increase in Ethereum gas prices. This directly affects the transaction fees charged by Uniswap, a disadvantage of sole reliance on one protocol.

Anyswap also relies on Fusion; however, their transaction fees will remain constant due to their tailored service provision.

Aside from Uniswap, Ethereum serves other numerous applications with its transaction, which creates high gas prices in the protocol. Fusion serves a limited number of applications with far fewer drawbacks compared to Ethereum, which helps keep its prices constant.

Moreover, Anyswap benefits from the merits of Fusion including true interoperability. The swapping solution is made more efficient through its interoperability with other blockchains.

The public response concerning Anyswap has been generally positive thus far. Some of the trading statistics recorded days after its release are an indication of the receptive nature of the target audience towards the exchange. 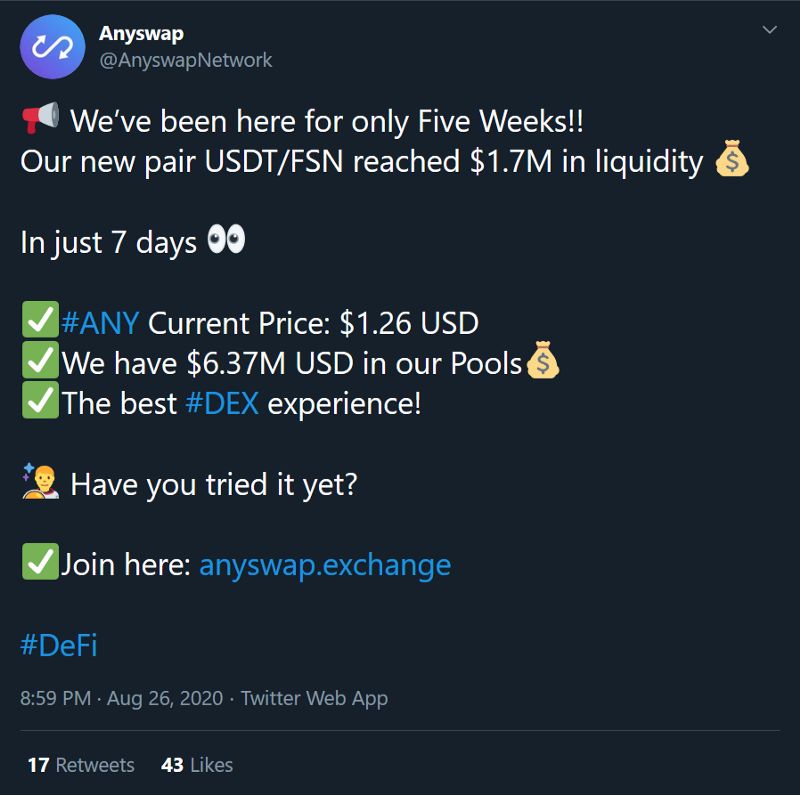 One more reason to consider Anyswap is in its strategic decisions in the market. Anyswap is partnering with Hotbit, a move that will see the platform gain two-fold. Firstly, the partnership increases liquidity (In USD) in Anyswap. Secondly, coins listed on Anyswap get to be listed on Hotbit News.

When contemplating shifting from Uniswap, Anyswap may be the next best long-term swapping option. 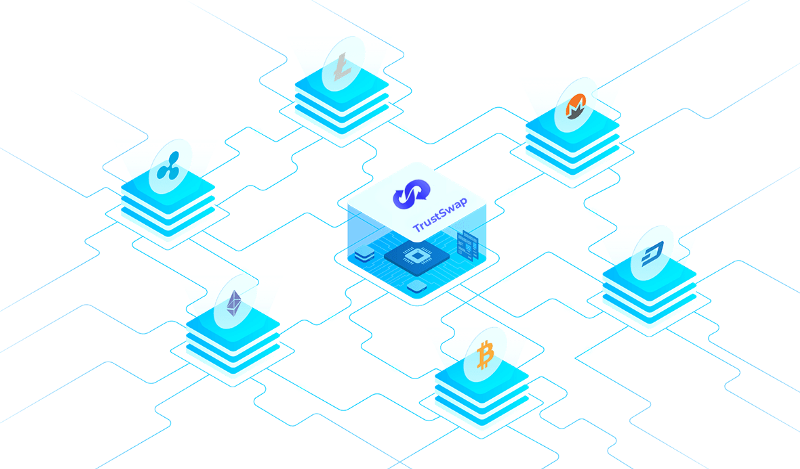 TrustSwap is a recent platform designed to offer financial transactions at affordable fees for businesses. Some of the transactions offered include:

These features are quite essential for businesses. For example, an employer seeking to automate their business payments will find the time-released transactions convenient. The feature allows businesses to remit their payments on a scheduled, regular basis.

TrustSwap is based on the Ethereum protocol. It will likely suffer the same fate of high gas prices as a result of its dependence on Ethereum.

The platform has a token known as SWAP. SWAP has the following users that are advantageous to TrustSwap users:

Governance — Stakers can vote in the ecosystem

Staking rewards — 80% of the transaction fee charged on the platform is rewarded to stakers and liquidity providers. Note that there are no trading rewards.

Reduced fees — Transaction fees on the platform are slashed by half when users pay in SWAP.

The platform is the youngest on our list. It was released in Aug 2020. Its recent release may be a drawback for some people. It has not yet been traded enough to warrant a proper review. Nonetheless, its features represent an ecosystem that understands the needs of the ever-changing business environment.

Binance is targeting the DeFi marketspace by the recently introduced Binance Liquidity Swap. The platform has been in the cryptocurrency exchange industry for quite a while, commanding a user base of over 5 million. 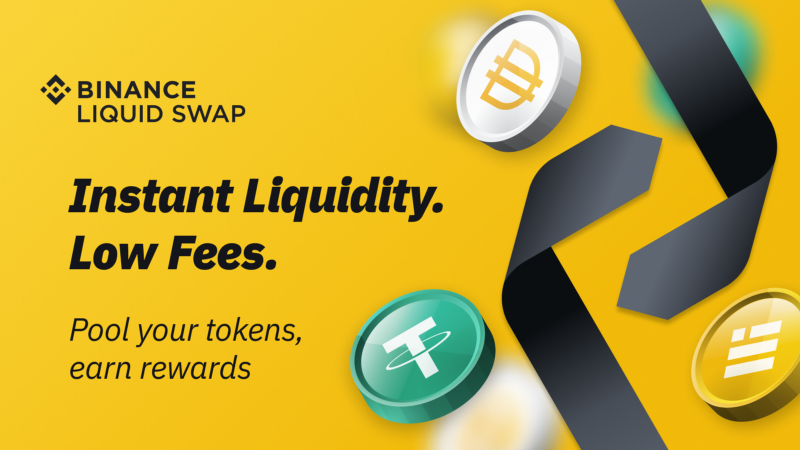 Using the DeFi solution is quite simple; you just need a Binance account, which many traders have. Binance is well established and it may appeal to a broader base making the success of the feature almost certain.

Of the platforms listed, Binance offers the most uncertain trading fees. The fees depend on the funds a user contributes to the liquidity pool. More funds mean fewer fees while less contributed funds mean more fees.

Binance offers rewards for staked tokens and gives back a cut of the transaction fees charged to the user.

Given its position in the blockchain industry, Binance becomes a safe choice to make, especially to those who already have Binance accounts. However, Binance Liquidity swap is not fully decentralized. The security issues that surround Binance as a result of its partial centralization should also be taken into account.

The four platforms have their pros and cons. Depending on the nature of swapping you undertake, either may be convenient for you. However, there is still one that is arguably more rounded than the rest and that is Anyswap.

Uniswap is a great platform and most people may stick to it despite reading the facts. Its surging popularity creates an air of trust around Uniswap, which makes it a ‘people’ option. Trustswap and Binance Liquidity swap are both great platforms. Between the two, Binance is likely to grow faster.

Anyswap trumps the other alternatives with excellent service, links to true interoperability, and an overall lower transfer fee. It also appears to be the futuristic option of the four.

♂️ Hi, my name’s Sal.
If you found this article useful and would like to view my other work please be sure to clap and follow me on Medium and LinkedIn!😎