The Game-Ending, Keyboard-Breaking, World of Lag (and how to fix it) 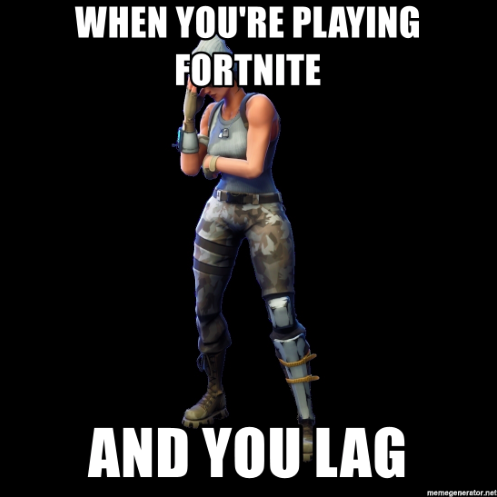 If you’ve ever played an online multiplayer game, you’ve probably suffered from some sort of lag. When Ronaldo is kicking the referee in Fifa 18 (instead of the ball) or your character in Counter-Strike starts teleporting around into different walls, its the nasty result of high latency, the slow connection speed from the games servers to your gaming system. And this isnt a trivial problem. Newsweek wrote about Fortnite’s game-breaking update that introduced lag effects while building and graphic rednering issues that made the game “almost unplayable”. There are 1000’s of videos on YouTube that show hilarious (and soul-crushing) moments of defeat, as gamers lose control over their characters and die mysteriously in the heat of an intense skirmish.

Jitter, lag, and slow ping are all results of slow and unreliable internet connections. A ping of over 80ms will result in a laggy experience in almost any modern game, while packet loss is what causes the effect known as “rubber-banding”, where a character looks like a bad teleporter malfunction and headshots magically never happened. In games where subsecond reaction times and laser sharp aim are the paths to victory, lag ensures that you will never reach the highest levels of competitive play. Its become such a standard phenomenon in gaming, that players will regularly blame lag for inferior gameplay results.

What are your choices for fixing lag

This is usually the most common area people focus on to address their game lag issues. Each game has its own system demands, so its important to make sure your hardware meets the minimum requirements to run the game. This will include processing power, RAM, and most impotently, the graphics card. If any of these is below the minimum requirements, the game will be unbearable to play, let alone be competitive online

If your system meets all of these requirements, you can also decrease the resolution and graphics quality of the game to help a bit more. Finally, make sure that you aren’t connected to Facebook, Twitter, Youtube or downloading anything on your network at the same time, as this will also affect the speed of your gaming connection. Someone else in the house watching Netflix can also have this lag effect on your gameplay, esepecially if you dont have a router that can prioritize devices.

The best way to connect to your router is with a direct connection using the Ethernet port. However, this isnt always an option and you’ll need a strong wifi connection to make the best of your network connection to the game server. More robust routers let you prioritize devices on the network (so that your gaming machine always gets a better internet connection than someone else in the house) and also can help identify which devices might be slowing you down. Here are some of the best options on the market depending on your budget and needs

From the manufacturer: “The XR500 Nighthawk Pro Gaming WiFi Router uses state-of-the-art software to optimize your internet connection by stabilizing ping, reducing lag spikes, and keeping you in the game with reliable wired and wireless connectivity for fast-paced gaming.”

The XR500 is your best balance between budget and power. Lots of customization options, but not the best option if you frequently have LAN parties

From the manufacturer: “The ASUS ROG Rapture is a gaming tri-band router featuring a 1.8GHz quad-core processor and the latest 4x4 802.11ac MU-MIMO technology. Game Dashboard with Game IPS controls and protects your network in real-time while delivering data rates up-to 5334 Mbps across prioritized ports and gaming-dedicated 5GHz Wi-Fi band.”

It looks like alien weaponry, and it just might be. The strongest, fastest gaming router on the market, is equipped with VPN Fusion and 8 Lan ports for hardwired gaming action. You can’t go wrong with this behemoth of a router, but the price tag is the highest of the 3 options.

From the manufacturer: Here’s a router with the ultimate performance that keeps you in control. Meet Razer Sila — our first gaming router that isn’t just built to deliver unhindered speed, but lets you prioritize your applications for smooth wireless gaming performance. Say goodbye to congested WiFi networks and experience reliable throughput anytime and anywhere at home.

It might not be as powerful as the other two options but its definetely a lot sleeker and more affordable. The addition of its mesh network capabilities make this an interesting choice as you can purchase a second one “activate a dual algorithm Hybrid Wireless Mesh, giving you coverage that completely blankets your home in WiFi”

With this problem becoming more and more visible with the growth in esports and game streaming like Twitch, new solutions that provide dedicated routing networks are starting to become a necessary part of any hardcore gamers life.

WTfast has created a new breed of VPNs called “GPNs”, Gaming Private Networks. They provide dedicated server routes across the world directly to the popular gaming servers like DOTA, Overwatch, Fortnite, and a whole lot more. By having a dedicated route, the chances are that the network speed will be alot faster and packetloss more unlikely. Haste and Outfox also have solutions that offer dedicated networking routes for speeding up your online gaming connetion.

Although these solutions are dedicated to gaming, they still suffer from the issue that servers can be unreliable or not located in a route better than the one provided by your Internet Service Provider. Marlin Protocol, a new networking protocol from the blockchain world, is looking to solve that problem by incentivizing server operators to join their network and guarantee reliability. Marlin reduces network latency for gaming apps and significantly improves gamer experience. Gamedex —a gaming platform for digital collectible cards, and the games built for them — is one of Marlin’s pilot partners.

Even with the strongest gaming system and direct network connection, the game server needs to be operational to actually connect. Many games, like Fortnite and League of Legends, are capable of supporting millions of players simultaneaously around the world, but succumb to the strains of hosting such high volumes concurrently.

Here is a list of links to quickly check the status of the game server you might be trying to connect to. Make sure to check here first before breaking your next keyboard.