Tangible Utopias: An Exciting Journey To The VR World 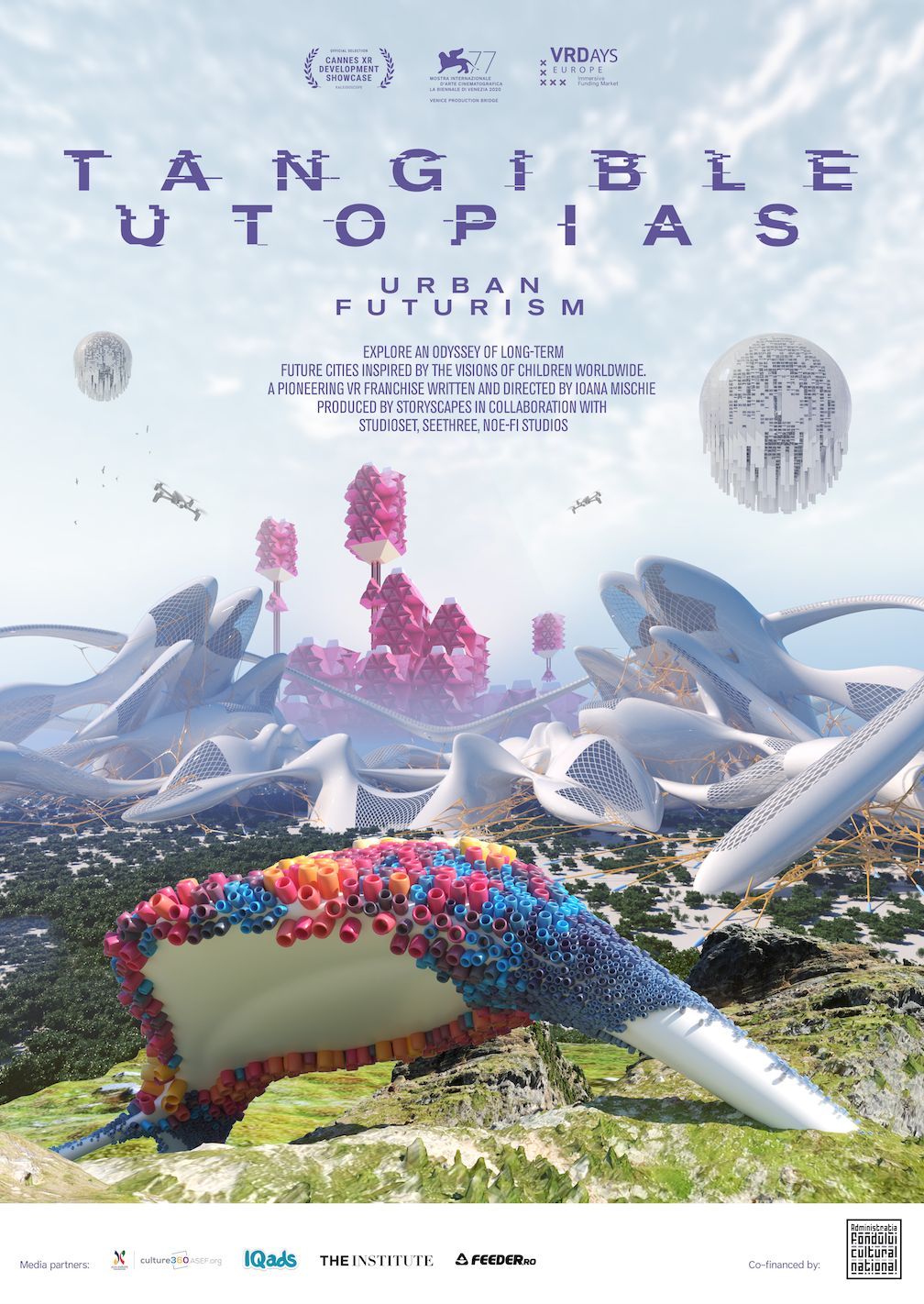 “Tangible Utopias is an exploratory VR experience immersing the viewer as a first person into an Odyssey of potential future city scenarios as envisioned by children around the world, with the purpose of inspiring the future of society. ” (Ioana Mischie, transmedia artist/futurist)

You start watching the trailer and it feels like you are attending a sneak peek into long-term urban futures. From the first sequence you are transposed into an urban mirage that carefully guides you with a lot of imagination in a world you would like to be part of. At the end of the trailer, you find yourself wanting to scout for more. Well, this is just the beginning.

Tangible Utopias: Urban Futurism is the first innovative VR experience that not only tries to envisage, but also to immerse us in what it would be like to live in a world designed according to more playful and out-of-the-box societal principles. What if nature would be integrated into our human habitats in a highly organic manner? What if our cities could become highly adaptive and could respond to our feelings? What if we could customize the colors and textures of buildings? What if long-term cities could become not only functional but also playful, enchanting, inspirational?

The project began as an artistic journey of writer/director Ioana Mischie that aimed to extend the transmedia project Government of Children, which reunited more than 100 children envisaging the next century of their society in a feature-length 3D documentary. The project catalysed, archived and immersed adults in the civic visions of children around the world on the long-term evolution of society. Having this cinematic journey as an inspiration, Tangible Utopias aimed to bring life, form and rhythm to the initial ideas that were mostly captured in forms of interviews or drawings. The visionary ideas turned into virtual worlds.

The VR universe is conceived as a meditative, exploratory, interactive journey in a multitude of fictional cities, in which explorers can personalise their chosen urban future by choosing the amount of nature or technology from these urban environments. The VR scenario is based on 10 ideas chosen from 200 archived visions of Romanian children with ages between 7 and 12 years. The project is produced by Storyscapes Association, in collaboration with Studioset, SeeThree, Noe-Fi Studios and is co-financed by the National Cultural Fund Administration.

Tangible Utopias marked since the beginning of the project a conceptual, artistic and technological premiere, which aims to adapt the human imagination into tangible artistic forms by creatively maximizing new technologies: “Tangible Utopias is a window into the most daring human imagination that may configure our realities for the long term. The VR experience invites us to explore, contemplate and co-create a multi-dimensional urban futures. We often talk about smart cities, what if we could envisage as well holistic cities, empathic cities, adaptive cities?” the project representatives tell us.

The technical and fictional basis of the virtual experience is noe-fi, an audio-visual genre initiated in Ioana Mischie’s US doctoral study which. Unlike the sci-fi genre that bases the creative act on the accelerated evolution of science, noe-fi “imagines futures focused on the evolution of human consciousness, individually or collectively. The VR project facilitates a form of virtual telepathy, where we can explore and personalise the imagination of others about the future. We want to create advanced forms of collaborative fiction to generate, in the end, not only virtual realities, but also material realities, human realities, with a high degree of complexity. Ideally we wish to create holistic artistic worlds that can be viewed not only in cinemas or in purely artistic spaces, but in as many levels of our societies as possible,” says Ioana Mischie, the project's creator.

Tangible Utopias is not only an innovative artistic project but an edutainment initiative which combines education and entertainment in a fascinating journey for both children and adults passionate about elevated human habitats. Moreover, the project’s creative team admirably combines the visions and imagination of children with the trends in global architectural design so that the results reach a high level of experience and sensory involvement. The architectural design of the first cities is signed by Alexandru Pop, a Studioset 3D artist that has a generous background in architecture. The 3D models are signed by Călin Bogdacenco and Alexandru Pop. The visionary cities were integrated in Unreal by Mircea Olteanu. Unreal interactivity was created by Adrian Tăbăcaru. The development was facilitated by Theodora Giurgiuveanu and Germina Ion. The entire project reunited a highly transdisciplinary team, inviting on board also anthropologists, sociologists, educators to turn the visionary ideas into highly feasible habitats.

In addition, the project managed to initiate a first international partnership with VIGA Studios - an advanced studio based in India specializing in interactive VR programming. Vivek Reddy, one of the technological leads of VIGA has contributed to innovative technological extensions for Hollywoodian franchises.

“This partnership honours us and at the same time it opens up new potential horizons of co-production in the field of VR. Unlike film co-productions that require filming in multiple countries, in the field of VR co-productions are organic, based on remote work and with a holistic result. We like to believe that the success of such collaborations will encourage successful New Media co-productions. This could diversify VR creation in intriguing directions.” the project representatives pointed out.

In its first year of existence, Tangible Utopias traveled around the world even since its development phase and acquired multiple milestones:

December 2019 | TEDxBucharest Bold and Brilliant, an event in which a VR  exhibition stand attracted hundreds of people and delighted as many souls. Tangible Utopias was announced for the first time as a transmedia idea on the TEDx stage.

June | Cannes XR, the prestigious international immersive entertainment program selected the project and secured a first global debate around its evolution. The Tangible Utopias prototype showcased here brought together the first three virtual worlds in a continuous universe. A total of 23 innovative XR prototypes from 14 countries arrived at Cannes XR 2020, and Tangible Utopias was the only Romanian project selected in the top 11 international projects in development. The program consisted of pitching, mentoring and showcasing sessions hosted by the Museum of Other Realities. The event brought together innovative artists, investors and XR industry leaders representing top companies such as Google, Microsoft, Intel Studios, HTC Vive, Epic Games, Unity, Magic Leap or RYOT.

July | Winning the AFCN (The Administration of the National Cultural Fund) competition, at the New Media section - the VR project received funding to be brought to life locally with the help of a transdisciplinary team. The first five visionary habitats have begun the process of integration in the VR environment.

July | Street Delivery - a street event from Bucharest that hosted this summer an educational module of the project addressed to Bucharest children. Tangible Utopias project also received a scholarship award from the Cărturești Foundation. The children contributed and shared ideas on the evolution of the project.

November | The selection at VRDays Europe - Immersive Funding Market, the annual event in Amsterdam that takes place over 3 days and which includes both conferences and an exhibition on VR / AR / MR content, creativity and innovation. This year's edition was a special one, because experts in the field of AR and VR were present at online conferences that participants could access through an online streaming platform. Tangible Utopias was selected in the Immersive Funding Market program. The project was publicly pitched and its representatives benefited from meetings with VR investors and mentors.

November | Presentation at the Creative Europe event - in the panel facilitated by Valentina Miu, representative of the Romanian Media programme, the Tangible Utopias project was announced as a transmedia manifesto and photos from the immersive universe were shared.

Between November 15th and December 1st the project will host a collection of online events on its Facebook page - from transdisciplinary debates to user testing sessions for children and adults.

Although the project is still continuing, the team anticipates that in 2021, the interactive VR experience will be available to the public in an interactive and linear form.

Projects like Tangible Utopias: Urban Futurism can open new horizons and new production approaches, not only in the field of XR, but also in the film industry, where the pandemic crisis has had an unforeseen impact. Designed as a franchise project, accessing such a VR franchise requires a versatile production model, applicable to animated films and films that have important special effects (CGI) components.

"We like to believe that VR as a medium of expression can become franchisable, scalable over time as well just as the cinema industry matures with sustainable cinematic worlds. In order to reach this more easily, we will need European and global cultural policies to encourage New Media production. Countries such as Canada, France, Germany are constantly funding innovative projects and we need similar initiatives in regions such as Eastern Europe. Tangible Utopias does act also as a cultural manifesto, aiming to develop borderless VR.” (Ioana Mischie)

The transdisciplinary team of the Tangible Utopias project brings together filmmakers, 3D artists, architects, psychologists, anthropologists and children passionate about VR. Based on a concept created by Ioana Mischie, the independent project was joined by a team of professionals passionate about what they do. The project can be followed on Facebook, Instagram, Vimeo and on the dedicated website.

A project co-financed by AFCN

The project does not necessarily represent the position of the Administration of the National Cultural Fund. AFCN is not responsible for the project’s content or for the way in which the results can be used. These are entirely the responsibility of the financing’s beneficiary.