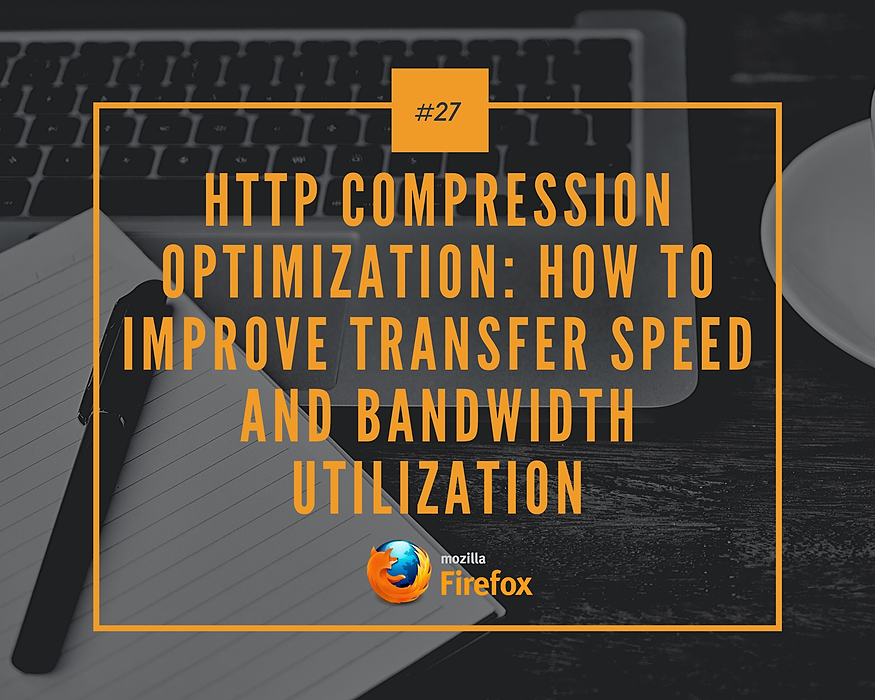 Compression is an important way to increase the performance of a Web site. For some documents, size reduction of up to 70% lowers the bandwidth capacity needs. Over the years, algorithms also got more efficient, and new ones are supported by clients and servers.
In practice, web developers don't need to implement compression
mechanisms, both browsers and servers have it implemented already, but
they have to be sure that the server is configured adequately.
Compression happens at three different levels:

Each data type has some redundancy, that is wasted space, in it. If text can typically have as much as 60% redundancy, this rate can be much higher for some other media like audio and video. Unlike text, these other media types use lot of space to store their data and the need to optimize storage and regain space was apparent very early. Engineers designed the optimized compression algorithm used by file formats designed for this specific purpose.
Compression algorithms used for files can be grouped into two broad categories:
Video formats on the Web are lossy; the image format is also lossy.

Some formats can be used for both loss-less or lossy compression, like , and usually lossy algorithm can be configured to compress more or less, which then of course leads to less or more quality. For better
performance of a Web site, it is ideal to compress as much as possible,
while keeping an acceptable level of quality.
For images, an image generated by a tool could be not optimized enough for the Web; it is recommended to use tools that will compress as much as possible with the required quality. There are numerous tools that are specialized for this.
Lossy compression algorithms are usually more efficient than loss-less ones.

As compression works better on a specific kind of files, it usually provides nothing to compress them a second time. In fact, this is often counter productive as the cost of the overhead (algorithms usually need a dictionary that add to the initial size) can be higher than the extra gain in compression resulting in a larger file. Do not use the two following techniques for files in a compressed format.

All modern browsers and servers do support it and the only thing to negotiate is the compression algorithm to use. These algorithm are
optimized for text. In the 1990s, compression technology was advancing
at a rapid pace and numerous successive algorithms have been added to
the set of possible choices.
Nowadays, only two are relevant: , the most common one, and the new challenger.
To select the algorithm to use, browsers and servers use proactive content negotiation. The browser sends an header with the algorithm it supports and its order of precedence, the server picks one, uses it to compress the body of the response and uses the header to tell the browser the algorithm it has chosen.
As content negotiation has been used to choose a representation based on its encoding, the server must send a header containing at least alongside this header in the response; that way, caches will be able to cache the different representations of the resource.

As compression brings significant performance improvements, it is
recommended to activate it for all files, but already compressed ones
like images, audio files and videos.
Apache supports compression and uses mod_deflate; for nginx there is ngx_http_gzip_module; for IIS, the element.

Hop-by-hop compression, though similar to end-to-end compression, differs by one fundamental element: the compression doesn't happen on
the resource in the server, creating a specific representation that is then transmitted, but on the body of the message between any two nodes on the path between the client and the server.
Connections between successive intermediate nodes may apply a different compression.

To do this, HTTP uses a mechanism similar to the content negotiation for end-to-end compression: the node transmitting the request advertizes its will using the header and the other node chooses the adequate method, applies it, and indicates its choice with the header.

In practice, hop-by-hop compression is transparent for the server and the client, and is rarely used. and are mostly used to send a response by chunks, allowing to start transmitting a resource without knowing its length.
Note that using and compression at the hop level is so rare that most servers, like Apache, nginx, or IIS, have no easy way to configure it. Such configuration usually happens at the proxy level.