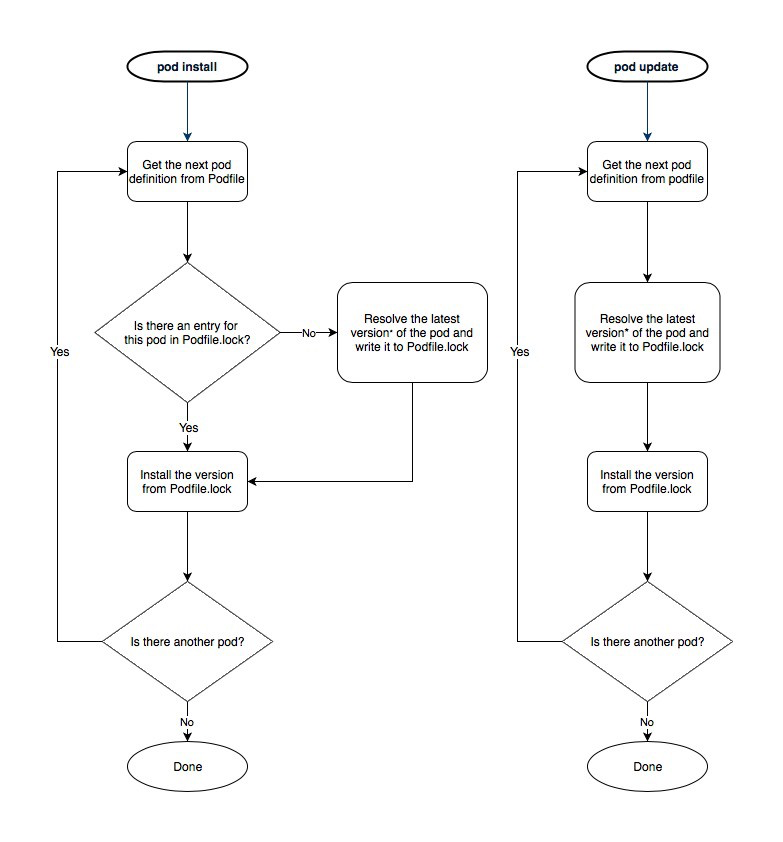 The definitive guide to installing and updating pods

The difference between pod install and pod update is subtle, and it isn’t always clear which you should use. But having a good understanding of what these commands do gives you much finer control over how dependencies are managed in your project, so it’s worth knowing the difference.

In the first part of this article I’ll give you a list of recipes showing whether you should run pod install or pod update in some common situations. Then in the second part I’ll explain why the different commands do different things, and how CocoaPods uses the Podfile.lock file to make it all happen.

For these recipes to work, ensure that Podfile and Podfile.lock are committed to source control.

This will install the latest version* of each of the pods you specified in your new Podfile. It will also create a MyProject.xcworkspace file if one didn’t already exist.

You added a new pod to your Podfile

This will install the latest version* of any new pods added to your Podfile, leaving your other pods unchanged.

If you were to run pod update instead, it would install the new pods and update each of your existing pods to its latest version*.

This will go through all of your pods and make sure that the latest version* of each is installed in your project.

This will make sure that the latest version* of the pod you specify is installed, whilst leaving your other pods unchanged.

This will make sure that the latest version of your pod is installed, whilst leaving your other pods unchanged.

This will install all pods in the Podfile at the exact versions that were previously installed in this cut of the source code.

If you were to run pod update instead, it would install the latest version* of each of the pods in the Podfile. This could prevent the project from building if the latest versions weren’t compatible with other code in the project. I’d recommend running pod install to get the code building, then updating pods as necessary in a controlled manner.

This will install all pods in the Podfile at the exact versions that were installed in the version being built. This is important for a stable build, because these are the versions that the code was developed against, and it means that every build of that cut of code will use the same pod versions. If you were to use pod update instead, your build could potentially use different versions of pods each time it builds.

This occasionally happens after updating pods, or after switching between branches of a project that contain the same pods at different versions.

This will reinstall all pods in the Podfile at the exact versions that were previously installed, and is usually enough to straighten out any issues that Xcode can find itself with.

Sometimes people suggest deleting the /Pods directory and thePodfile.lock file, then running pod install. This will solve any issues with Xcode, but will also upgrade each of the pods in the Podfile to its latest version*.

Part 2: How it works

The difference between pod install and pod update lies in how they interact with the Podfile.lock file. This file is used to store the exact version of each pod that is currently installed in your project.

The easiest way to understand how it works is to look at the following diagram (disclaimer: this is a simple schematic rather than an accurate technical diagram).

pod update ignores Podfile.lock when checking for versions. It looks for the the latest available version* of a pod, and installs it if it isn’t already installed.

In both cases, CocoaPods then updates Podfile.lock with any new version numbers that were installed.

This is what allows you to use pod versions consistently across different installs of a project (i.e. when installing from a repository, across multiple team members, or on a build server), and is why Podfile.lock should be committed to source control.

In this article I’ve given recipes showing whether to run pod install or pod update in a number of common situations. I’ve then described how and why the two commands work in different ways. If you’ve found it useful, please give it a clap and / or share, and follow me for other useful articles.

[*] By latest version I mean latest version that satisfies the requirements and dependencies in your Podfile. See the section on Specifying pod versions in the official guide to The Podfile for more information.

Gabrielle is an iOS specialist who leads technical teams creating mobile apps. For app development and more, please contact her at Intercept IP (formerly Control F1), look her up on Linked In or say ‘hi’ on twitter at @GabEarnsh.

Read more of my stories:

Implementing a Sketch text design system in your Xcode project
Change text styles in Xcode as easily as in your design filemedium.com
Painless icon generation for iOS apps with Sketch and Xcode — Part 1
How to create all of your icon sizes in secondsmedium.com
Next-level Swift unit tests using the builder pattern
Make unit tests easier to code, review and maintainmedium.com

Related Stories
Subject Matter
Partner with us for Digital Product Development by @AWH
#promoted
Instagram-like Filters In React Native by @krissanawat101
#react-native
Making Your Own Memory Graph To Detect Memory Issues On iOS by @davidgg
#ios
7 Benefits of Using Flutter For Your Next Software Development Project by @linkupstudio
#flutter
Unit Testing Vs. Integration Testing In Android by @anugrg
#software-testing
React Native Maps: Irrepleceable Tips On Drawing A Route by @krissanawat101
#react-native