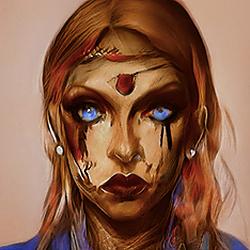 Slothicorn represents a shift away from copyrights, and a shift towards a new decentralized “WE” economy (ummmm….Weconomy?).

Slothicorn is part of the Open Source and Creative Commons movements. Slothicorn belongs to everyone and no one. As far as I can tell, Slothicorn emerged organically as an internet meme. I have yet to discover its original creator.

Here are some examples of cryptoart in case you’re not sure what this term means:

From @marty-arts’ recent entry into our official Create a Slothicorn contest:

Slothicorn rewards artists with the cryptocurrency, STEEM. This is perhaps the first time in history that artists who contribute to the commons can get paid for their efforts. The Creative Commons movement has, in the past been filled with people who volunteered their time and energy. Sustaining the Creative Commons movement was largely an unpaid martyrdom. There was no good mechanism in place that was able to reward artists monetarily for their time and creations.

The blockchain has changed this. As our world and society becomes more widely tokenized, the need for copyrights goes away and I’ll explain why.

Blockchain and cryptocurrency communities are able to properly align human behavior and economic incentives. Let’s take a deep dive into how Slothicorn operates on the Steem blockchain:

I have been a very active and early adopter of the Steem blockchain. When I first entered steemit.com, I was an impoverished creator/intellectual. I exemplified the idea rich, but cash poor type of individual.

I came into Steemit with nothing. Through my hard work and continuous creative efforts, I was rewarded with the cryptocurrency STEEM. I now have a stake in the platform and am interested in creating more value for Planet Steem. I’m interested in creating value because I want to increase the value of my own investment. Steem is a stake-weighted system called Delegated Proof of Stake. Read my article about this system here: https://hackernoon.com/explain-delegated-proof-of-stake-like-im-5-888b2a74897d

Planet Steem is an example of how tokenized systems are creating the proper incentives for human beings. In decentralized systems like Steemit, the roles of contributors, shareholders, owners and consumers all get blurred into one person. Every individual in a tokenized community has the chance to become an owner, contributor, a shareholder and also a user. Only when you experience this holistic feeling will you fully understand that the centralized corporate model is completely broken because the incentives are misaligned.

Consumers have different incentives than workers. Shareholders only care about profits.

Workers could care less about large returns, but are really interested in finding meaning in their daily work life. Investors could care less about workers’ ability to find meaning in their work, and I would go so far as to say that investors don’t care if a robot or a human does the work. All they care about is getting a return on their investment.

No one wants to be a slave and in decentralized, tokenized systems, we don’t need slavery anymore.

This is not to say that everyone will be equal. A true meritocracy can emerge from these tokenized, decentralized communities though. And the best part of this is that it’s no longer just an idea. These communities are already fully functional. Utopian.io is one example, and the one I’m building, Slothicorn, is another. Artists are already being paid to make Creative Commons cryptoart. It’s happening……very slowly, very sloth-like.

This information is being delivered to you not as some high and mighty philosophical diatribe. I am a living example of this new tokenized community and I am living it every day. The decentralized, token economy has transformed me from a miserable wage slave into an investor/contributor/user, all within the span of a year and a half. I have been thinking deeply about how I can best contribute to not only the Steem blockchain, but to the entire world.

If Bitcoin is the real Occupy Wall Street, then a Creative Commons cryptoart revolution can help it gain mass appeal, and also help free the creative people of the world, too.

I see the future being propagated by abundant “WE’s” instead of fearful “I’s”. This is the paradigm shift that the world needs more than ever.

Artists and creative thinkers can become a force for good by adding to the shared economy and in the process, be monetarily rewarded for their contributions. Tokenized economies make this possible, for the first time in history. Kickstarter showed us that crowdsourcing works, and Steemit is like Kickstarter on steroids, because economic rewards are given out once a week, and are distributed via an algorithm instead of a centralized entity.

To launch the Slothicorn Creative Commons Cryptoart community, we are currently having a Create Your Own Slothicorn art competition.

First place wins a Crypto Survival Kit. (Kit contains one Ledger Nano S, one Yubikey and one USB Flash Drive.) Create your own Creative Commons Slothicorn and submit your entry on steemit.com.

Are you a creative person or artist interested in disruption? Join us.
Are you a programmer who believes in the mission of Slothicorn? Join us.

If the Anonymous hacker collective had a sense of humor and a functioning way of creating wealth for artists, you’d get something along the lines of Slothicorn. Our discord channel has a chat room dedicated to CryptoKitties, too. Games and having fun are our weapons.

We are now looking for programmers who want to become part of the core group in Slothicorn. Join us in our discord channel to meet the Slothicorn community and learn how to become a part of Creative Commons Cryptoart history: discord.gg/GWQHDdR

This avatar is not Creative Commons. It came from Shelfies. I’m in the process of drawing an avatar I actually like.