Bitcoin's Market Cycle Peak is a Lot Closer Than You Think

In my newsletter, Crypto is Easy, I look at big trends, not the day-to-day movements of prices.

There’s never a bad time to buy bitcoin, but some times are better than others. It’s more about knowing the risks and opportunities and making a decision that feels good to you.

What’s your timeframe? Tolerance for risk? Mindset? What do you want to get out of the market?

Will it continue that course?

We’ll see. It’s realistic to expect bitcoin's price will go up for another month or two, hit its market cycle peak, then drop significantly. Like, 60-80% or more.

It’s also realistic to expect a pretty major crash now, or at least a few months of consolidation while the market settles down.

It’s not realistic to expect the price to keep going up at this pace through the end of the year, even though everybody seems to think it will.

Strength is fleeing the market

Everybody's talking super-cycle and last chance and this thing will never crash and institutions buy every dip.

We don't have any evidence of that. From previous updates, we know 2021’s ascent is being driven by retail investors—people like you and me. 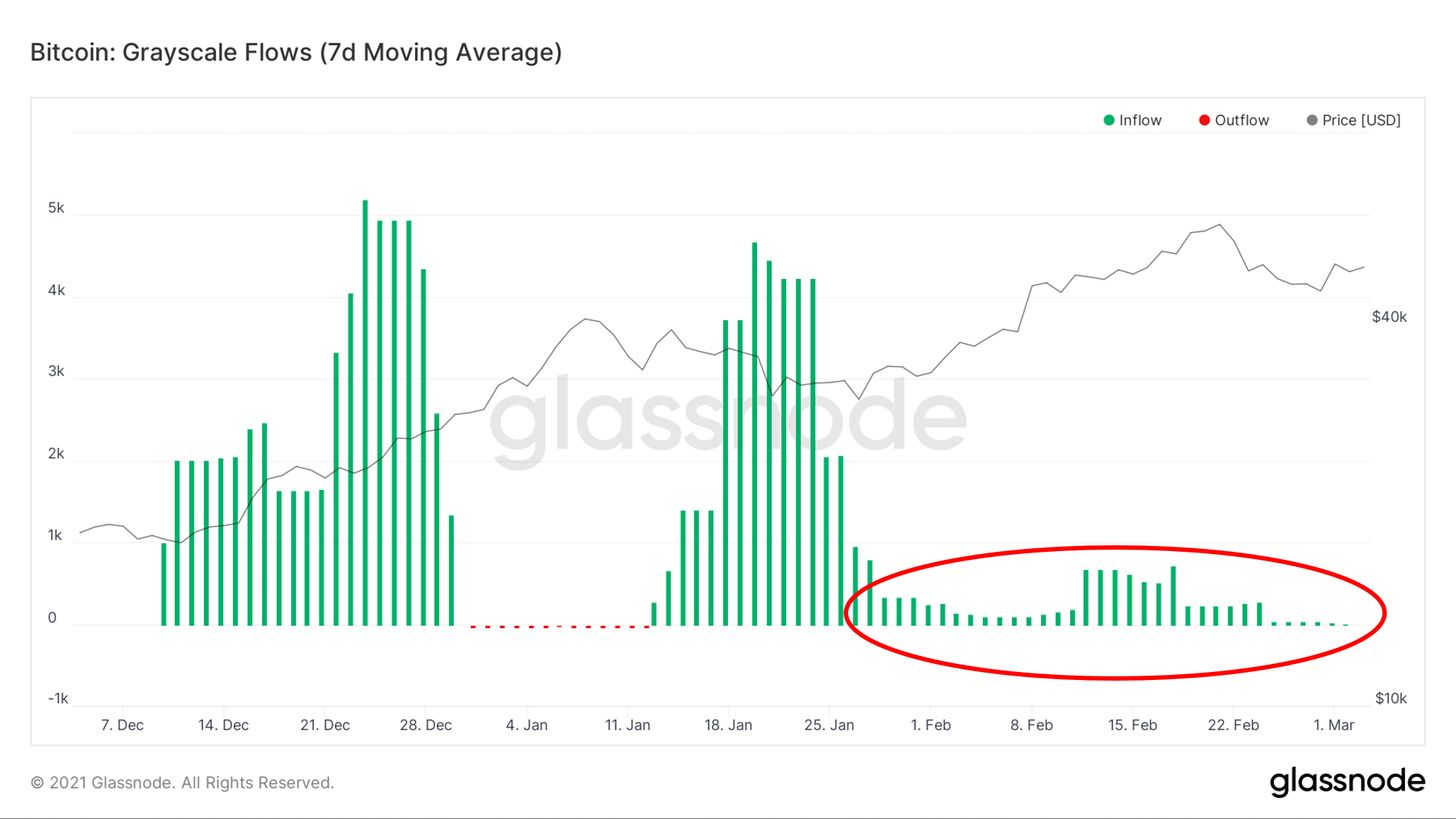 aSOPR, a measure of market sentiment, remains above its 1 baseline, suggesting people do not care about their bitcoins very much and will more readily trade them for something else.

You can see this in the chart below, which lumps short-term HODlers into colored bands. The shortest-term HODLers, 24 hours or less, are at the bottom and 1-3 month HODLers are at the top. The peaks are circled. 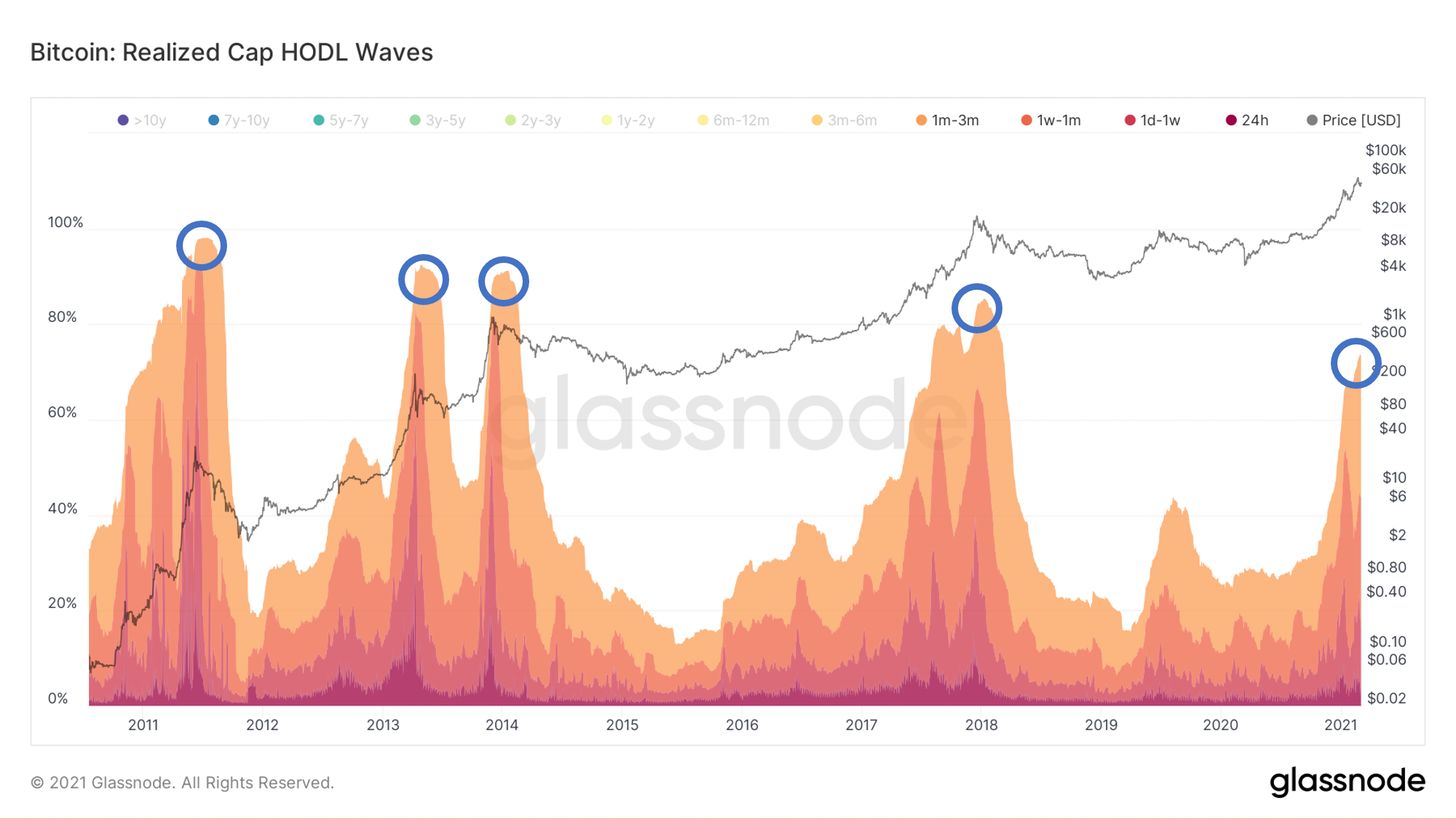 These HODL bands spiked up a lot in 2021, approaching mid-70% and getting closer to previous market cycle peaks.

If institutions are really HODLing, we should see these bands level out or drop as institutional bitcoins go to older HODL bands at the top of the chart, not newer ones at the bottom.

But we don’t see that. Instead, we see bitcoins continuing to flow to newer wallets.

As I've shown in previous updates, it’s unlikely those moves correspond to institutions or their custodians moving bitcoins around within the same portfolio, e.g., from large wallets to small wallets, old wallets to new ones. At least, if they're doing that, they're not doing much of it.

Maybe institutions and corporations simply don't hold enough bitcoin to change the trajectory of the market?

Meanwhile, I’m not buying or selling. Just sticking to my plan.

﻿My Plan for Bitcoin's Bull Market﻿

As soon as my plan signals to buy or sell, I will let you know. Watch my most recent updates for more about the data and trends.

My plan is not a trader’s plan. It’s focused on making the most of this bull market, buying when the price is not likely to go much lower for much longer and very likely to go up forever.

Altcoins have kept pace with bitcoin as both fell. Look at the highlighted circle in this chart of bitcoin dominance, you can see the altcoins’ proportion of the market held as bitcoin’s price rose and fell during mid-January and February. 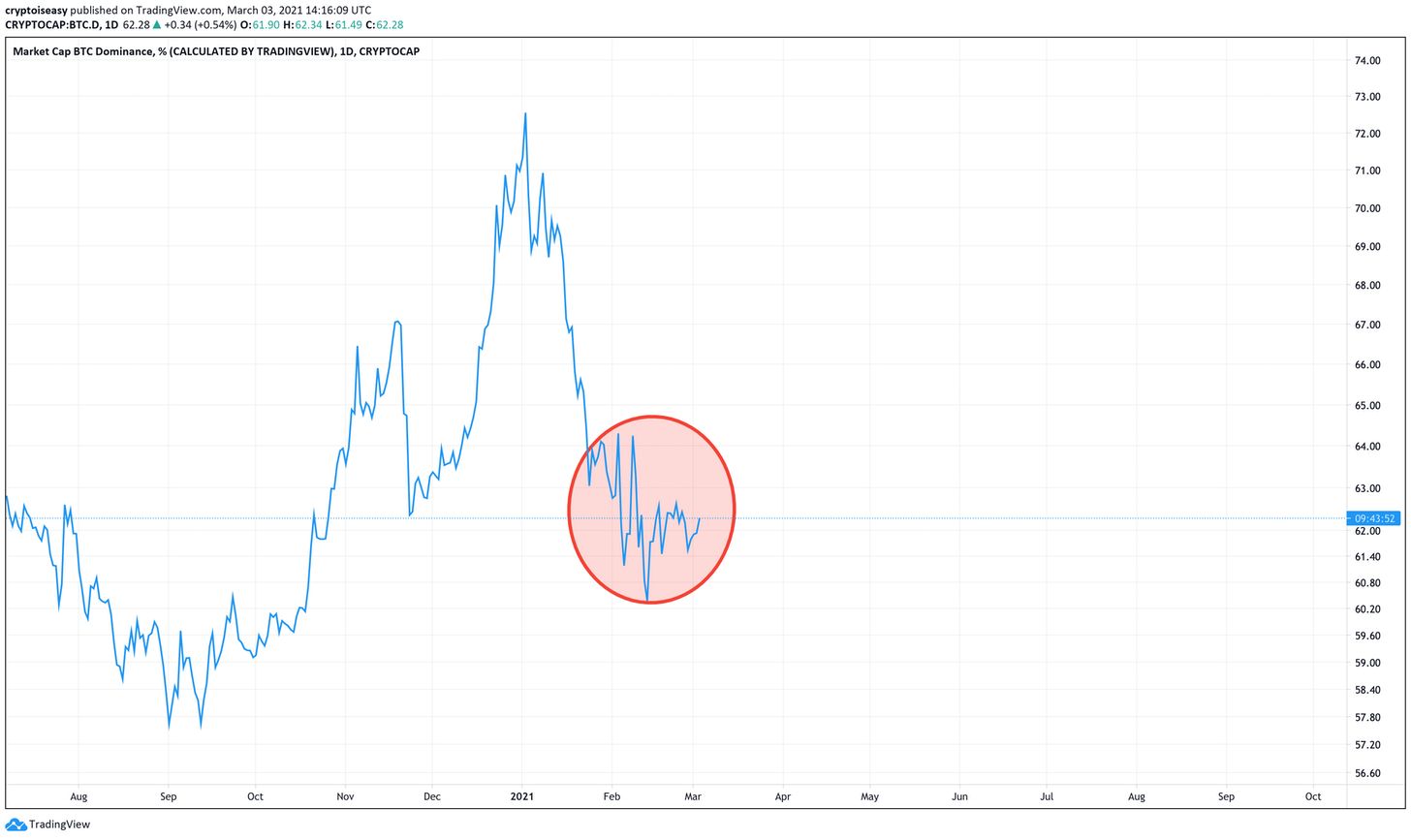 This is not a price chart, it simply measures the percentage of the total crypto market cap that’s captured as bitcoin.

In the past, when alts hold their portion while bitcoin fell or went sideways, the entire altcoin space went nutz as soon as bitcoin’s price turned around.

We just need to see whether bitcoin’s price turns around.

Does this mean altseason's over?

No. In fact, bitcoin's lull has kept altcoins from zooming. No matter how strong the trends and tailwinds, we can't have altseason unless bitcoin goes up. Bitcoin always leads, altcoins always follow.

Suffice to say, altcoins have outpaced bitcoin on the way up and kept pace with it on the way down. Assuming that trend continues, you can expect a massive boom for altcoins as soon as bitcoin turns around.

A nosedive would be great. That would give the market a chance to reset, laying a strong foundation for even bigger growth.

That can’t happen if bitcoin continues its current pace.

If that happens, we will see the most accurate top indicators, Puell Multiple and MVRV Z-Score, signal “sell” and the entire market will hit its cycle peak soon after (likely higher than $90,000). After that, bitcoin will have a huge crash.

Those models all contradict each other. As my friend says, there are no good models but some are useful.

For those who prefer data models instead of my on-chain analysis, look at the logarithmic growth curve model. That model fits this scenario. 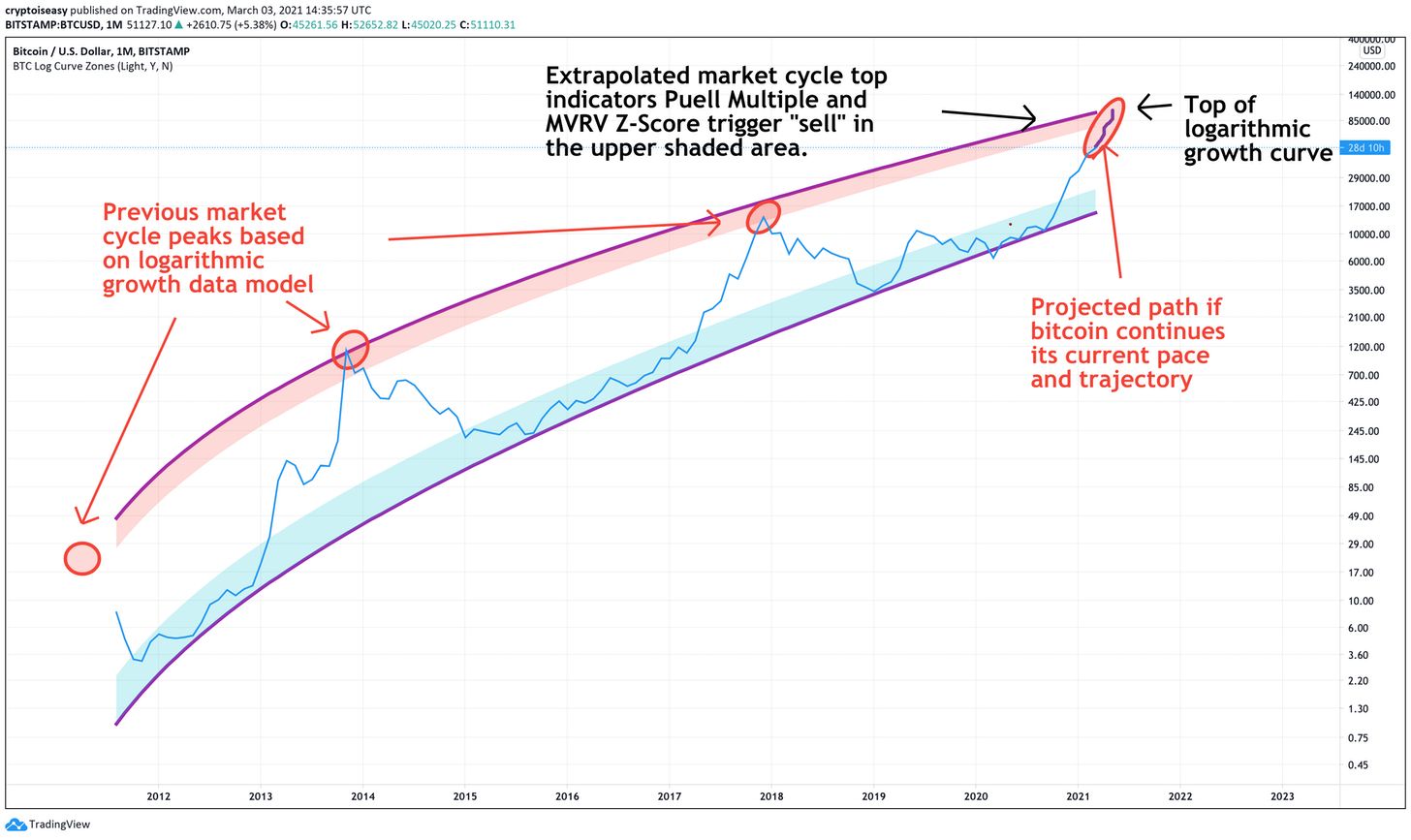 I prefer analytics that reflect what people do with bitcoin, not projections into the future. As a result, I'm don't make any decisions on data models.

It's just nice to know one of the models fits my analysis.

It’s hard to feel good about the market when we see the momentum turning against us.

Crypto prices can still go way, way higher long after strength departs. It takes a while for reality to catch up to the market.

My gut, personal feeling, looking at the data and reflecting on my own experience when I entered this market in November 2017?

It's just uncanny some of the similarities. Same chatter, same sentiment among OGs, same on-chain metrics, same comments on Twitter and YouTube.

People who refused to buy at $5,000 piling in at $50,000. Shills, pump-and-dumps, "I don't know what this does but I bought it," and the same patterns in on-chain movements of bitcoins.

In November 2017, crypto was just on the precipice of that explosion you probably remember. Prices had already gone up a lot but it wasn't (yet) all over the mainstream news, just an article here or there or maybe a segment on the occasional newscast.

From an investment perspective, that was a terrible time to enter the market. In hindsight, I would never have entered if I knew then what I know now.

Do you really want to hop on the plane when it's already running out of fuel and the forecast calls for storms? Or would you rather wait until it lands and hop on after it has a full tank and clear skies ahead?

You can't deny the opportunity is here, now, as it was in November 2017.

Without a deep crash or long, sideways consolidation, this market is heading to a big, blow-off top sooner and at a lower price than most people expect. Only a nice, healthy crash or extended sideways move can stop that from happening.

Price usually lags momentum. We can see momentum in the data I look at. That momentum is fading.

Yes, we could see bitcoin's price double or triple in the coming weeks. Altcoins will do multiples better. That's realistic.

Just be careful out there. We’ve gone up a lot very quickly. What goes up must come down. Not usually or sometimes, but always.

The only question is how high do we go before we fall, or did we already start the drop?

Time will tell. Relax and enjoy the ride!

Mark Helfman publishes the ﻿Crypto is Easy newsletter. He is also the author of three books and a top bitcoin writer on Medium and Hacker Noon. Learn more about him in his bio.

Related Stories
Subject Matter
Download Mysterium VPN - First 20 GB streaming FREE by @Mysterium Network
#promoted
How To Become A Software Developer in the Blockchain Industry in 2020 by @MarkHelfman
#blockchain-career
Why You Should Chase Interesting Problems, Not Money by @daniel-chae
#tech
TikTok vs Instagram Reels: Which is best for business marketing? by @littleseedgroup
#tiktok-vs-reels
Jython: The Love Child of Python and Java by @miketechgame
#python
5 Critical Topics Covered at Once: Code Review Practises You Cannot Miss by @drazenz
#coding
3 Reasons Why Blockchain Won't #ReleaseTheKraken: An Interview with John Sebes of TrustTheVote.org by @benjaminbateman
#blockchain-voting