Despite the game having a very rocky and controversial start, Bethesda Softworks unveiled a new 2021 content roadmap for Fallout 76 that will cover the game throughout the rest of the year.

First up is the Spring update. Bethesda has already shared a more detailed look at the upcoming additions to the game for this spring at Fallout 76’s official website. Coming to the game will be SPECIAL Loadouts, CAMP Slots, Mannequins, and a new Daily Ops expansion. Players who already own the game on the Bethesda.net launcher may test the features in the more current PTS right now.

Also available in the spring is the return of Armor Ace in a fight against Commissioner Chaos and the Yukon Five. Season 4 will also have new rewards on the Scoreboard such as cosmetics, consumables, and more.

Coming in the summer will be the Steel Reign event, which will continue the story of The Brotherhood of Steel. This will feature new quests, locations, NPCs, and new rewards. Also set for the summer will be Legendary modules, allowing players to craft specific Legendary items.

For the Fall period, Bethesda is promising a new feature called “Private Worlds.” There will also be an expansion to the Daily Ops to give players more options.

Finally, the Winter update will bring four-star Legendary Weapons and Armor, along with CAMP

Pets. There will be a new Public Challenge called Invaders From Beyond. This will have players across the game teaming up to complete challenges, face new enemies and earn new rewards.

The Winter Seasonal event will bring back Cultists of Appalachia in The Ritual. Gamers who help the cultists at Point Pleasant with a dangerous ritual will receive some unique rewards.

Content roadmaps can sometimes be misleading. Case in point, the jettisoned content roadmap for the disastrous launch for BioWare's failed game, Anthem. Fallout 76 didn't have the most auspicious of launches either.

Fallout 76 is available now for Windows PC, Xbox One, and PlayStation 4. You can view an image for the new content roadmap here: 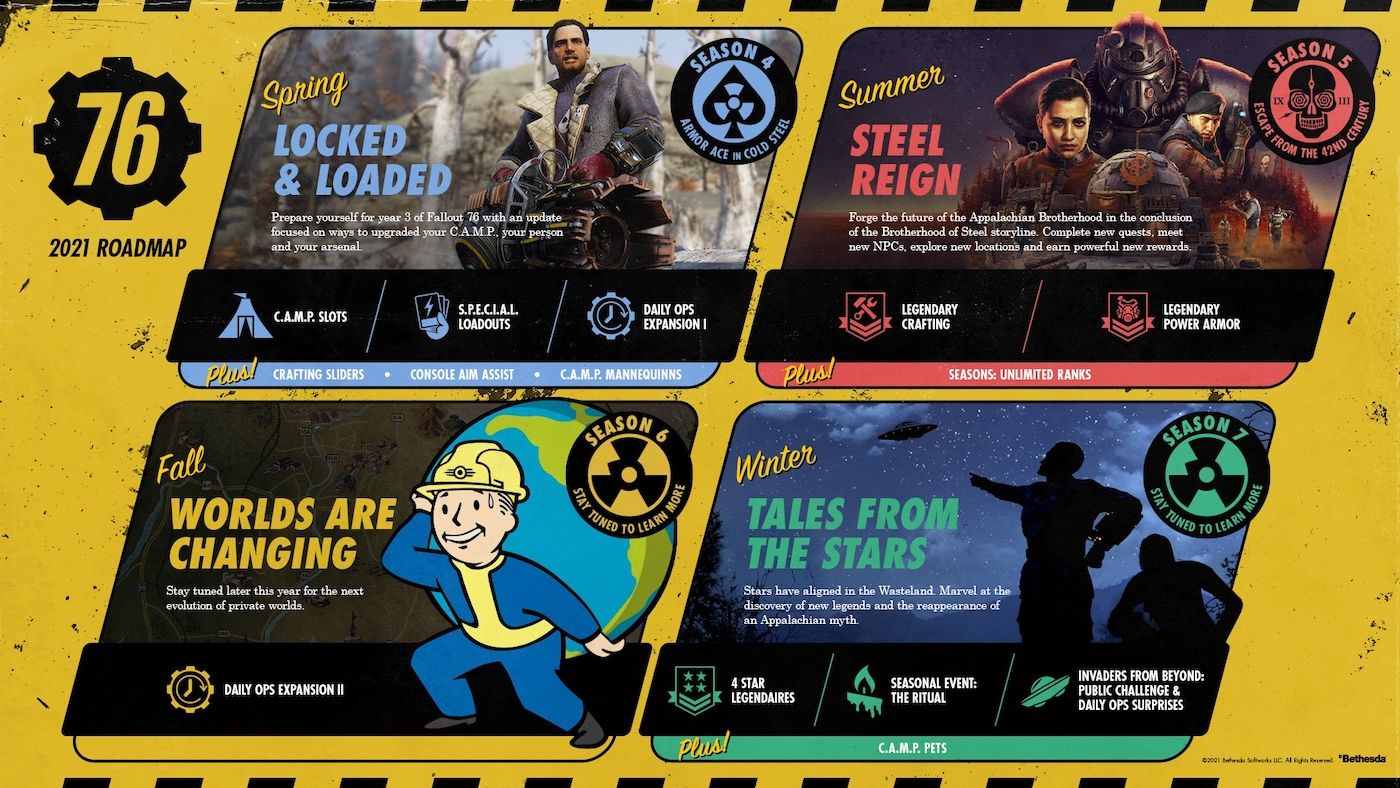 Check out the latest in gaming: