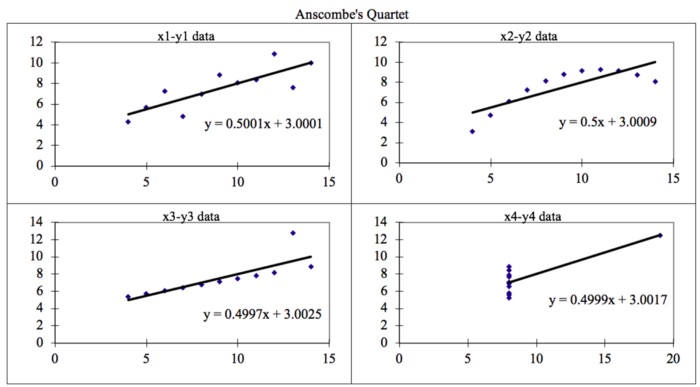 Anscombe’s Quartet can be defined as a group of four data sets which are nearly identical in simple descriptive statistics, but there are some peculiarities in the dataset that fools the regression model if built. They have very different distributions and appear differently when plotted on scatter plots.

It was constructed in 1973 by statistician Francis Anscombe to illustrate the importance of plotting the graphs before analyzing and model building, and the effect of other observations on statistical properties.

This tells us about the importance of visualising the data before applying various algorithms out there to build models out of them which suggests that the data features must be plotted in order to see the distribution of the samples that can help you identify the various anomalies present in the data like outliers, diversity of the data, linear separability of the data, etc.

Also, the Linear Regression can be only be considered a fit for the data with linear relationships and is incapable of handling any other kind of datasets.

These four plots can be defined as follows:

The statistical information for all these four datasets are approximately similar and can be computed as follows: 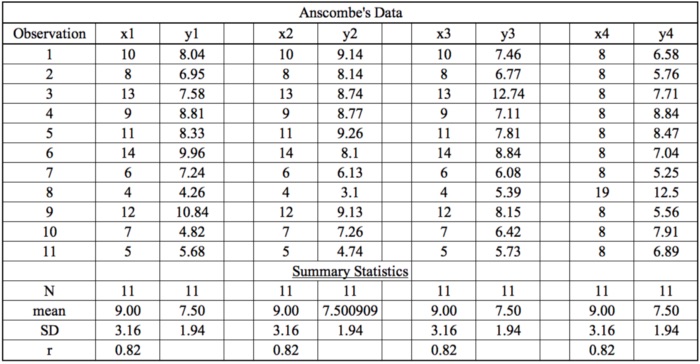 When these models are plotted on a scatter plot, all datasets generates a different kind of plot that is not interpretable by any regression algorithm which is fooled by these peculiarities and can be seen as follows: 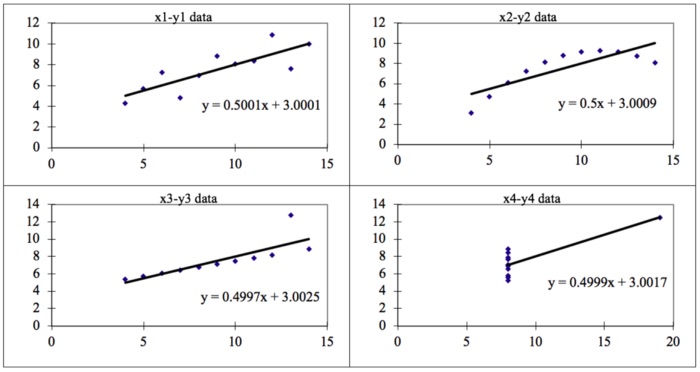 The four datasets can be described as:

We have described the four datasets that were intentionally created to describe the importance of data visualisation and how any regression algorithm can be fooled by the same. Hence, all the important features in the dataset must be visualised before implementing any machine learning algorithm on them which will help to make a good fit model.

Thanks for reading. You can find my other Machine Learning related posts here.

I hope this post has been useful. I appreciate feedback and constructive criticism. If you want to talk about this article or other related topics, you can drop me a text here or at LinkedIn.

Previously published under a paywall.

Related Stories
Subject Matter
Book a Demo. Ship Fast. Rest Easy. LaunchDarkly. by @LaunchDarkly
#promoted
Little-known Linear Regression Assumptions by @imsparsh
#machine-learning
Top Books About AI You Should Read in 2021 by @Nikhil
#artificial-intelligence
10+ Best Cryptocurrency & Bitcoin Exchanges in 2021 [Apr'21 Review] by @dmitry.leijko
#crypto
How to Write Your First PHP Code by @Bairesdev
#php
How To Improve Code Quality With Code Reviews and Refactoring by @alex-omeyer
#programming
Why End a Sales Pitch Deck like the Dude Reading Disclaimers? by @David
#slogging