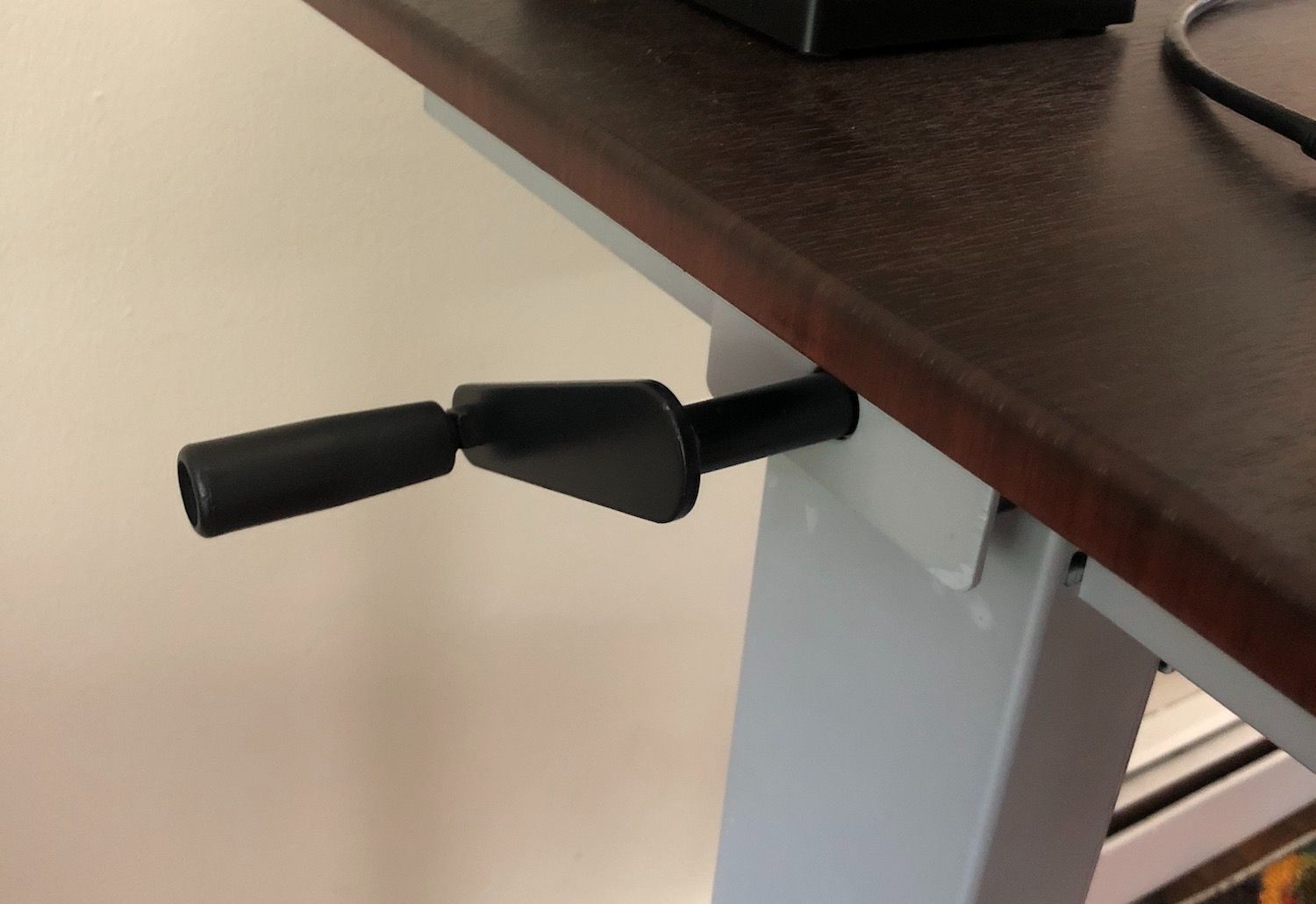 Programmer by day, author by night.

In part one I discussed the first version/Bluetooth version of my desk upgrade.

In this article, I’ll discuss upgrading the desk to use Google Smart Home so I can control my desk with my voice.

Adding WiFi to the desk was actually pretty simple. I swapped out the microcontroller from the Nordic NRF52 to an ESP32 since the ESP32 has WiFi built in. Most of the control software was portable since it was written in C++, and both devices could be programmed with Platform.IO and the Arduino libraries, including my own tfmini-s library that I wrote to measure the current height of the desk.

Here is the necessary system architecture to get my desk to talk to Google. Let’s first talk about the interaction between myself and Google.

So, the desk was now WiFi enabled, then it was time to figure out how to interface with Google Smart Home. Google Smart Home is controlled through Smart Home Actions. What is interesting about Smart Home actions is that your service acts as the OAuth2 server and not as a client. Most of the work that I put into the server was related to implementing the OAuth2 Node.js Express app, which will eventually find its way up to Heroku and act as the proxy between Google and my desk.

I was lucky enough that there is a decent implementation of a server through two libraries. The first was the underlying server implementation, called node-oauth2-server and found here. The second was the adapter to hook the library up to express, called express-oauth-server and found here. The example in the GitHub repo for the adapter left a lot to be desired and didn’t really work. It took me a while to reverse engineer how to use the two libraries together. Now I have a decent model that supports registering accounts, refreshing tokens, and validating tokens. The following code snippet shows all the functions that are necessary for the OAuth2 server but you can see the full file here.

There is quite a bit of code there but I’ll explain the highlights. The two routes that are used for the OAuth2 server are /oauth/token and /oauth/authorize. These are used for getting a new token or refreshing expired tokens. Next is getting the server to respond to the actual Google Action. You’ll notice that the /gaction/fulfillment endpoint points to a

object. Google sends requests to your server in a specific format and provides a library to help you process those requests. Below are the functions necessary to communicate with Google but you can view the entire file here. Finally, there is a /healthz endpoint that I’ll talk about at the end of this article.

The /gaction/fulfillment endpoint uses a middleware called app.oauth.authenticate() and all of my hard work getting the OAuth2 server working was so that this middleware would work. This middleware validates that the Bearer token that Google provides us references a valid user and has not expired. Next, the route sends the request and response to a

object. Google sends requests to your server in a specific format and provides a library to help you parse and process those requests. Below are the functions necessary to communicate with Google but you can view the entire file here.

When you add a Smart Action to your Google account, Google will then perform a sync request. This request lets Google know what devices your account has access to. The next is a query request which is how Google queries your devices to determine their current state.

When you first add a Google Action to your Smart Home account, you’ll notice that Google first sends a sync request and then a query request to get the holistic view of your devices. The final request is an execute request which is how Google tells your devices to actually do things.

Google uses device traits to control your devices. Google uses these traits to provide UI elements on your Google devices as well as to build communication patterns for voice control. Some of the traits include ColorSetting, Modes, OnOff, and StartStop. It took me a while to decide which trait would work best for my application, but I later selected on Modes.

You can think of modes as a drop down where you can select one of N predefined values, or height presets, in my case. I called my Mode "height" and the possible values are "preset one", "preset two", and "preset three". This allows me to control my desk by saying "Hey Google, set my desk height to preset one," and Google will send the appropriate execute request to my system. You can read more about Google device traits here.

Finally, Google Smart Home and my computer were communicating. Up until this point, I was using ngrok to run my express server locally. Now that I finally had my server working well enough it was time to make it accessible to Google at all times. This meant using Heroku to host my app. Heroku is a PaaS provider that makes it easy to deploy and manage applications.

One of the major benefits of using Heroku is the add-ons. Heroku add-ons made it super simple to add a CloudMQTT and Postgres server to my application. Another benefit of using Heroku is how simple it is to build and deploy. Heroku automatically detects what code you are using and builds/deploys your code for you. You can find more information about this by reading about Heroku Buildpacks. In my case whenever I push code to the Heroku git remote it will install all of my packages, strip out any development dependencies, and deploy my application all by simply issuing "git push heroku main".

With a few clicks I had CloudMQTT and Postgres available to my app, and I only needed to use a few environment variables to integrate those services with my application. Everything I've done on Heroku was built for free. However, CloudMQTT is a third-party add-on and costs $5/month.

I believe the need for Postgres is self explanatory but CloudMQTT deserves a little more explanation.

From The Internet to a Private Network, The Hard Way

There are a few ways to expose an application, or in my case an IoT device, to the internet. The first is to open a port in my home network to expose the device to the internet. In this case, my Heroku Express app would post a request to my device by using a public IP address. This would require me to have a public static IP address as well as a static IP address for my ESP32. My ESP32 would also have to act as an HTTP server and be listening all the time for instructions from Heroku. This is a lot of overhead for a device that will only receive instructions a few times a day.

The second way is called "hole-punching". This is how you can use a third-party external server to expose a device to the internet without having to use port-forwarding. Your device basically connects to the server, which establishes an open port. Then, the other service can connect directly to your internal device by retrieving the open port from the external server. Finally, it connects directly to the device using that open port. (This may or may not be entirely correct since I only read part of a paper about it.)

From The Internet to a Private Network, The IoT Way

I wasn’t very happy with those two solutions. I’ve added many smart devices to my home and I’ve never had to open a port on my router so port forwarding was out. Also, hole-punching seems far more difficult than what I’m looking to implement and is better suited for P2P networks. Through further research I discovered MQTT and found out that it is the protocol for IoT. It has some benefits like low power, configurable resiliency, and it doesn’t require port forwarding. MQTT is a publisher/subscriber protocol which means that the desk is a subscriber of a specific topic and the Heroku app is a publisher to that same topic.

The final step is to receive the message on the ESP32 and move the desk. I’ll show some highlights of the desk code below but the full source code is here.

When the desk is booted up we first begin communication between the TFMini-S, which is a distance sensor, to get the current desk height. We then set up a state machine for the actual desk movement. The state machine receives commands through MQTT and then is responsible for aligning the user’s request with the actual height of the desk read from the distance sensor. Finally, we connect to the WiFi network, connect to the MQTT server, and configure the callback for any data we receive on the MQTT topic we are subscribed to. I’ll show the callback function next.

The main loop does a few things: First, it reconnects to the MQTT server if it wasn’t already connected. Then, it processes any data it received on the subscribed MQTT topic. Finally, it works to put the desk into the correct location according to the state requested over the MQTT topic.

There you have it! My desk is completely voice-controlled and communicating with Google to receive commands!

The last endpoint that I didn’t discuss is the /healthz endpoint. This is because Google expects you to respond rather quickly and booting up a Heroku application upon every request wasn’t going to work for me. I set up a ping service to ping the /healthz endpoint every minute to keep the service alive and ready to respond on Heroku. If you plan on doing something like this, then remember that this will use up all of your available free dyno hours. This is fine for now since this is the only app I’m running on Heroku. Alternatively, for $7/month, you can upgrade to Heroku’s Hobby plan, which keeps the app "alive".

Building an IoT device has a lot of overhead to get started. I constructed the actual hardware, built the control circuitry, set up an MQTT server, built an Express OAuth2 server, and learned to interface with Google Smart Home through Actions. The initial overhead was a lot but I feel like I’ve accomplished a lot as well! Not to mention that the MQTT server, Express OAuth2 app server, and Google Smart Home Actions are all reusable. I’m really interested in the Smart Home space, and I may try to expand my IoT devices repertoire to include some sensors that can monitor various things around my house and report back over MQTT. Soil monitor sensors, temperature sensors, and light sensors will be a lot of fun to monitor and analyze.

Where to Go Next

The way I’m measuring the height of the desk right now is flakey at best. I’m using an IR distance sensor called a TFMini-S which mostly works. I’ve noticed that the height of the desk changes a little bit throughout the day as the ambient lighting of the room changes. I’ve ordered a rotary encoder so I can count the number of turns the rod running through the desk actually makes. This should give me much more accurate movements any time of the day. I also have access to a server that I host out of a basement somewhere that I might investigate running my own Mosquitto MQTT server, Node-RED server, and Express OAuth2 app if I’m feeling up to hosting something myself. Finally, right now all the electronics are just out in the open on my desk. I plan to enclose those so everything looks nice and tidy!

Thanks for reading! Here are all the links from above for easy reference.