What the FRAX: A Crypto is Born after President Trump Failed at Infiltrating the Federal Reserve

I’m smiling while trying to make a positive impact on the world. #GIVENation #WorldEthicalDataForum

Stephen Moore is known for being the loud-mouthed economist and former campaign adviser of President Donald Trump’s. On March 15th 2019, Trump nominated Moore to join the Federal Reserve in efforts to manage the United States economic system. Moore withdrew consideration on May 2, not stating a reason. After their plans to infiltrate the Federal Reserve failed, they decided to take matters into their own hands and start their own currency.

Yes, those of us working in #FinTech have heard this story many times, but here we go again!

Once upon a time, in a land corrupted by money-hungry leaders all the ‘little people’ suffered problems stemming from economic inflation to trust issues; including double spending, and more… but there’s an solution!

Many say Bitcoin is the answer… President Trump and Stephen Moore disagree. The slightly orange-tinted President and the former Wall Street Journal editorial board member desire to join forces with Thought Leaders in the crypto world and release their proposed solution to today’s economic crisis. How? On November 21st, 2019 Stephen Moore announced he will manage a digital Stablecoin, termed Frax.

“In an interview with Fortune, Moore said his libertarian views led him to support cryptocurrency, which he believes is an important alternative to state-backed money. “I’ve followed monetary policy for 30 years and always been troubled by the government monopoly on currency, which is unhealthy for markets,” said Moore. “It’s very healthy for private competitors to challenge central banks over the money supply.” Source.

Stephen Moore is co-founding Frax with an existing successful crypto entrepreneur, Sam Kazemian. Sam is known for launching the bad ass blockchain Wikipedia competitor, Everipedia. Kazemian and Moore state Frax currently doesn’t have outside investors but will launch in the next few months, relying on existing and established technology.

Founders claim Frax is unique as far as stable assets are concerned. Many existing Stablecoins are pegged to a one-to-one pool of reserve dollars, where Frax will rely on a fractional reserve. This one of a kind project relies on algorithms to loan out it’s reserves, while collecting interest; this ensures the value of Frax remains truly pegged to fiat. Sam claims utilizing this system will eliminate the need for central banking entities, as all the transactions of loans will be safely stored and recorded on a blockchain.

Perfection, in theory. Yet, there lacks a real world case study. Some argue there can’t be a guarantee of one-to-one backing, stating users may all decide to sell, and Frax would collapse. Kazemian rebuttals with a solution; “Frax’s loan mechanism will ensure it’s stability.”

Why Frax-ing Now?
If Trump and others haven’t professed their undying love to digital currencies in the past, why now?
Stephen Moore tells many he’s been approached by other cryptocurrency projects and he’s made it known, he feels cryptos can be valuable when governments follow misguided monetary policies. Stephen shares his economic history knowledge and warns governments have and may be continuing to try to deflate their currencies in order to pay back their countries debts. In his opinion, if users are given an alternative means of barter, governments will hopefully be deterred from deflationary policies, before they begin.

“For now, senior officials U.S. government officials, many of whom have expressed deep skepticism about cryptocurrencies, do not appear to share his view.

Central banks in other countries, however, have been more to the potential of cryptocurrency. The Bank of Canada and the Bank of Japan, for instance, have been experimenting with crypto versions of their national currencies while Switzerland has created a special legal regime to foster cryptocurrencies.

“If I had been on the Fed, I would like to have seen encouragement for the development of cryptocurrencies like Frax. It can be a check and balance against runaway currencies,” he said.” Source.

Frax will be a fractional-reserve, algorithmic Stablecoin.
“The basic premise is that we layer this over a collateralized stablecoin such as Dai and use interest from compound.finance loans to stabilize the price to $1 to 1 Frax algorithmically changing the supply of Frax.” Source. 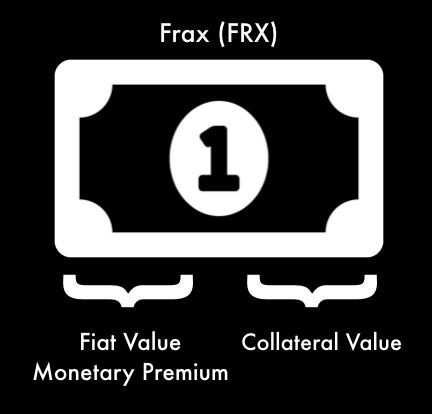 There is a 2 token system in place.

The Dai is then lent out (either through the compound finance smart contract itself or the exact implementation within the Frax contract).

The cash flow from the interest rate earned through the loan is accrued into the smart contract.

Once there is a sufficient amount of interest earned, the reserve ratio goes down by X. If X=1 then for every 99 Dai you put in, you mint 100 Frax.

The difference in the reserve ratio (aka X) must be paid in FXS as a fee (which is burned out of circulation) so that value isn’t leaving the system but instead captured by the investment token.

The investment token, FXS, is essentially valued as the net future fiat value creation of the network in perpetuity.

If the market price of FRX holds at $1 1 FRX then the reserve ratio continues to go more and more fractional by increasing X as more interest cash flow comes in.

If the FRX price drops because the market only values FRX based off the backing collateral, then the accrued cash flow is used to buy back FRX and “walk back” the reserve ratio to the market’s value of 1 FRX $1.

At all times, there is a small amount of Dai that is always kept in the contract to exchange out for FRX for easy redemption.

Essentially, this is a system to algorithmically measure the market’s value of the “monetary premium” of a currency. This can be used to scale Dai and allow DeFi loans to provide monetary policy/stability. Source

What are your thoughts on Frax and Stablecoins in general?

Need To Know More About Stablecoins?

I’ve written a lot about them…

I also covered Crypto-Collateralized Stablecoins. That article can be viewed here.

Then switched things up a bit and visited the only Non-Collateralized Stablecoin Category, Seigniorage Supply (Algorithmic) Stablecoin Model. Enjoy the description of the futuristic currency model here.

Next? A simple to understand category among an Asset-Collateralized group; Metal-Collateralized Stablecoins found here, with a long list of promising projects.

Lastly, combining asset-backed and non-collateralized crypto’s, we have our Hybrid Stablecoin Model Category. View this here.

If you’d like to learn how to “get ahead” with your newfound Stablecoin knowledge, visit my very last part of my Ebook here. “A Guide to Using Stablecoins to Increase & Protect Your Assets.”

Tell me what you think.

I’d love to professionally discuss, collaborate and connect with you all. Would love any feedback, positive and negative; as I’m only here to improve and educate myself/others.

So, how can we mutually benefit one another?