Happiness for me is to share every interesting thing I learn. While doing a course: "Become a Thought Leader" on Linkedin, I came across the best course on Storytelling by Shane Snow.

Before we jump on to the tactics, let's travel back in time.

You sat down over dinner, over coffee, maybe just somewhere in a park and you talk about the stories of your life.

The stories reflect on the personas of both of you.

"Those who tell the stories rule the world." - Native American Proverb.

That, in turns, helps both of you to decide, whether to take it forward from there or not.

Similarly, when stories are told for a business, it becomes easier for buyers to make a choice.

So, here are the 7 tactics that can help you make your stories more impactful: 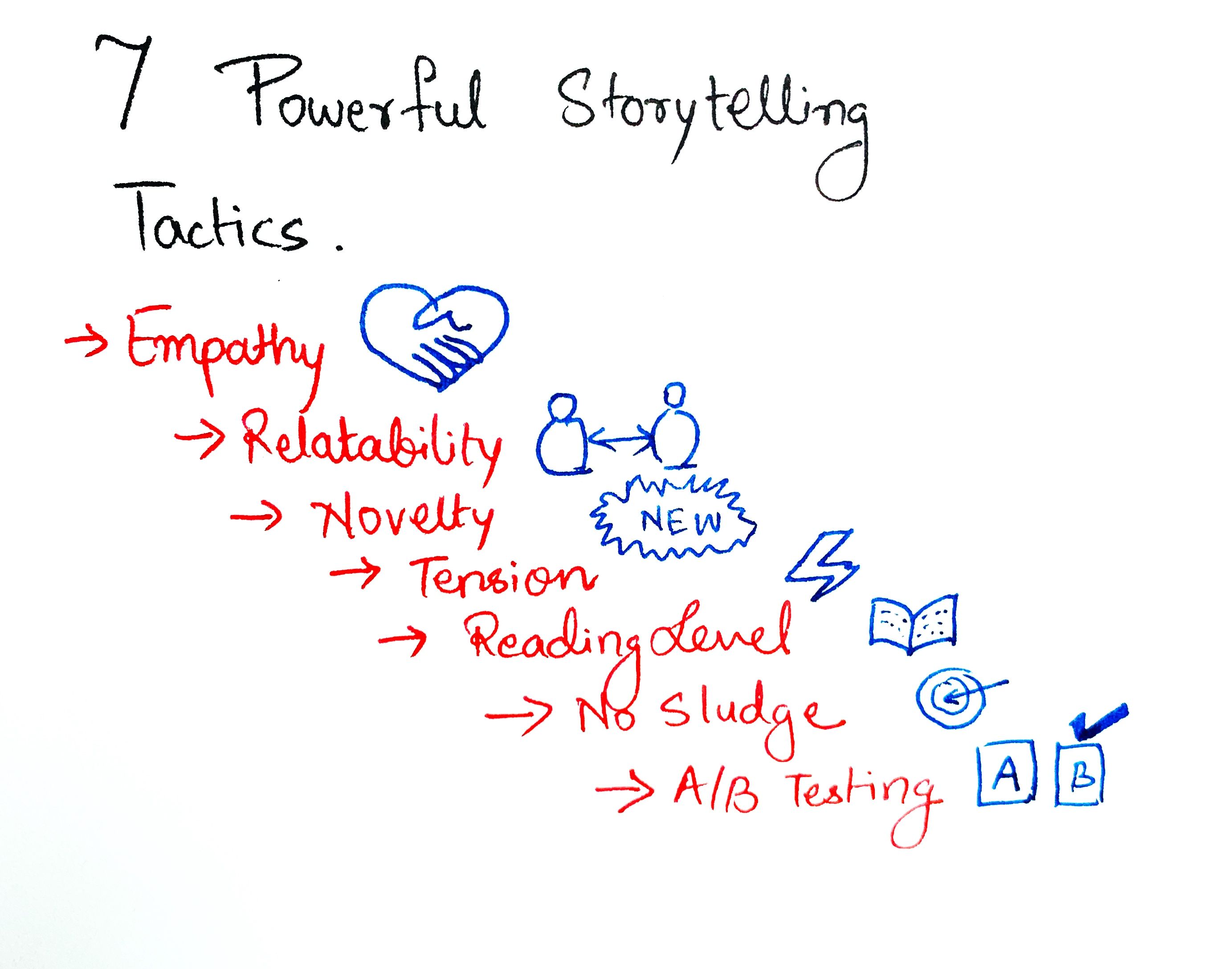 Once upon a time, there was a beggar.

He held a board in his hands that read: 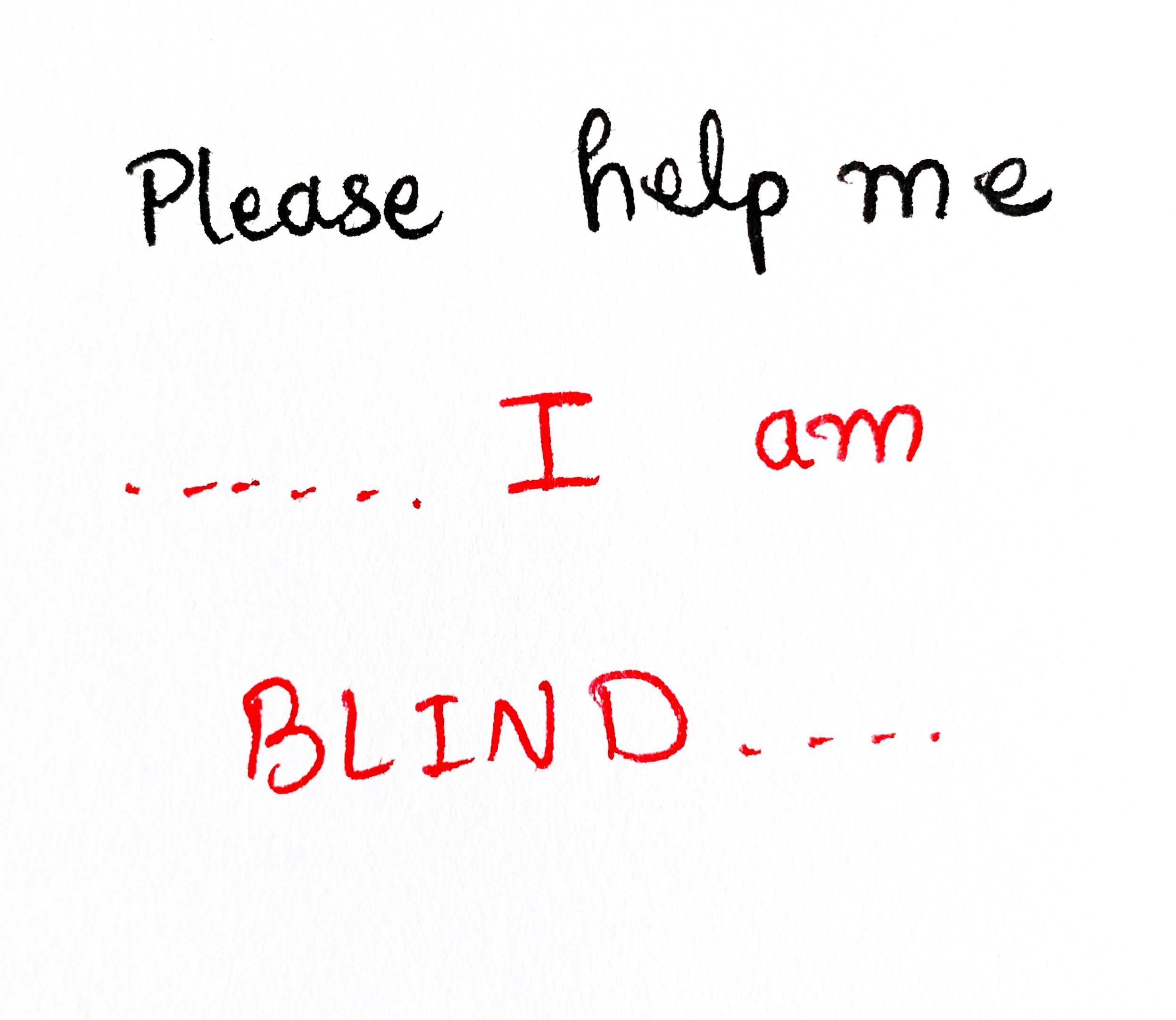 A passerby stopped and asked the beggar.

"How are you doing?"

The beggar replied, "Not so great, people are not giving me any money, the going is really tough for me."

The passerby said, "I cannot give you money but I can rewrite the board for you."

The passerby wrote the new message board for the beggar.

The board now read as follows: 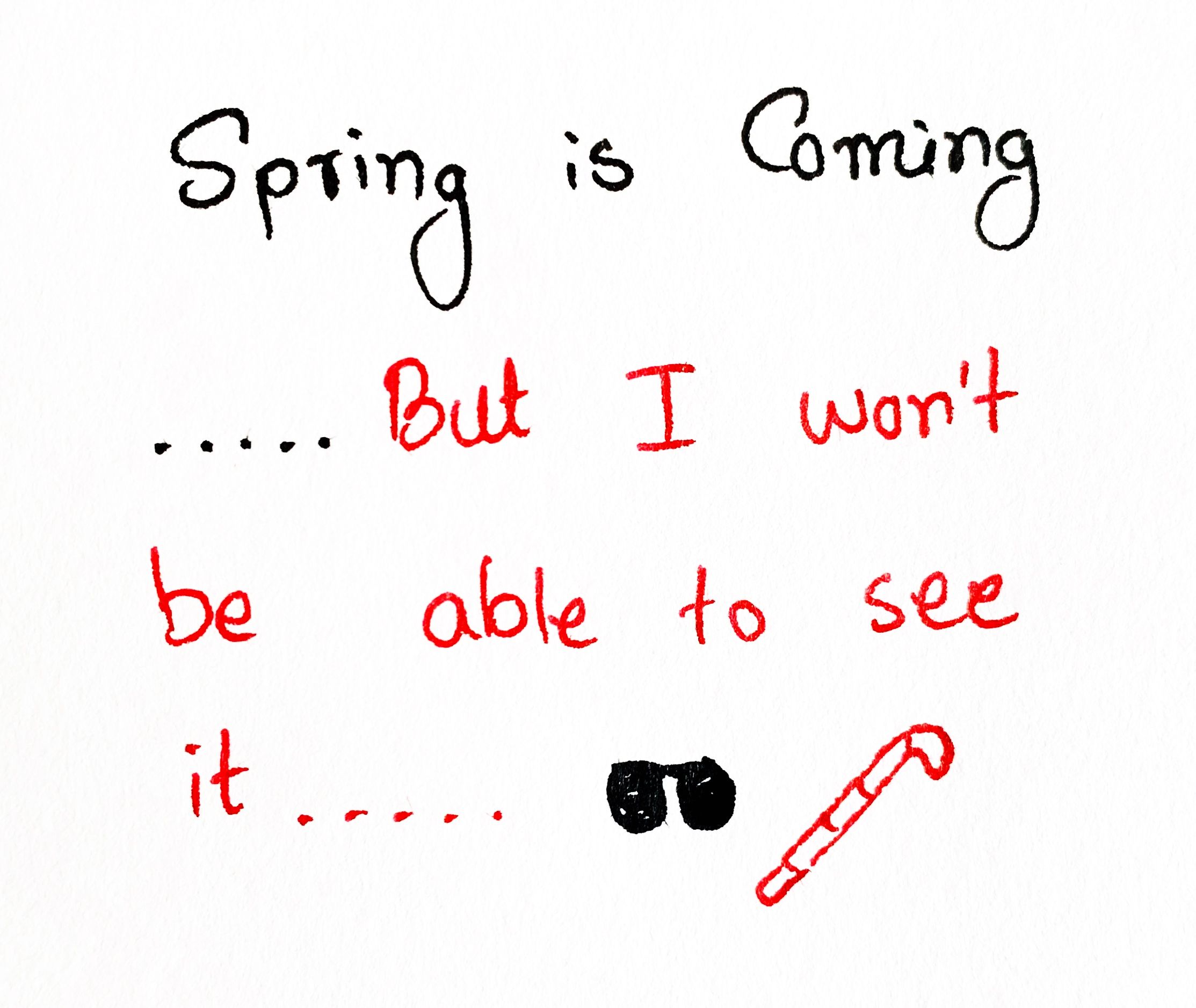 A few days went by.

The same passerby stopped and asked the beggar.

The beggar replied, "I am much better off now, my hat gets filled 3 times a day".

That's the power of words.

Let's try to understand what happened when people read the new message:

When people read this message they instantly developed empathy towards the beggar.

They realized how they have the ability to see the beautiful world.

This in-turn triggered them to give some money and help the beggar.

Just to make it a tiny bit easy for the beggar.

So I remember when I was a kid and I first tried Coca Cola and I thought it was disgusting. It's sort of a foreign taste, Coke. But later on if you went to a foreign country and you were given a Coca Cola, which maybe as a kid you didn't like and you're given some other gross drink, some tea, you would end up liking Coca Cola more. You would like this more because simply you had had it before. So mere-exposure theory says that the longer, the more you get exposed to something, the more you'll like it and this is why relatability ends up being important for storytelling. 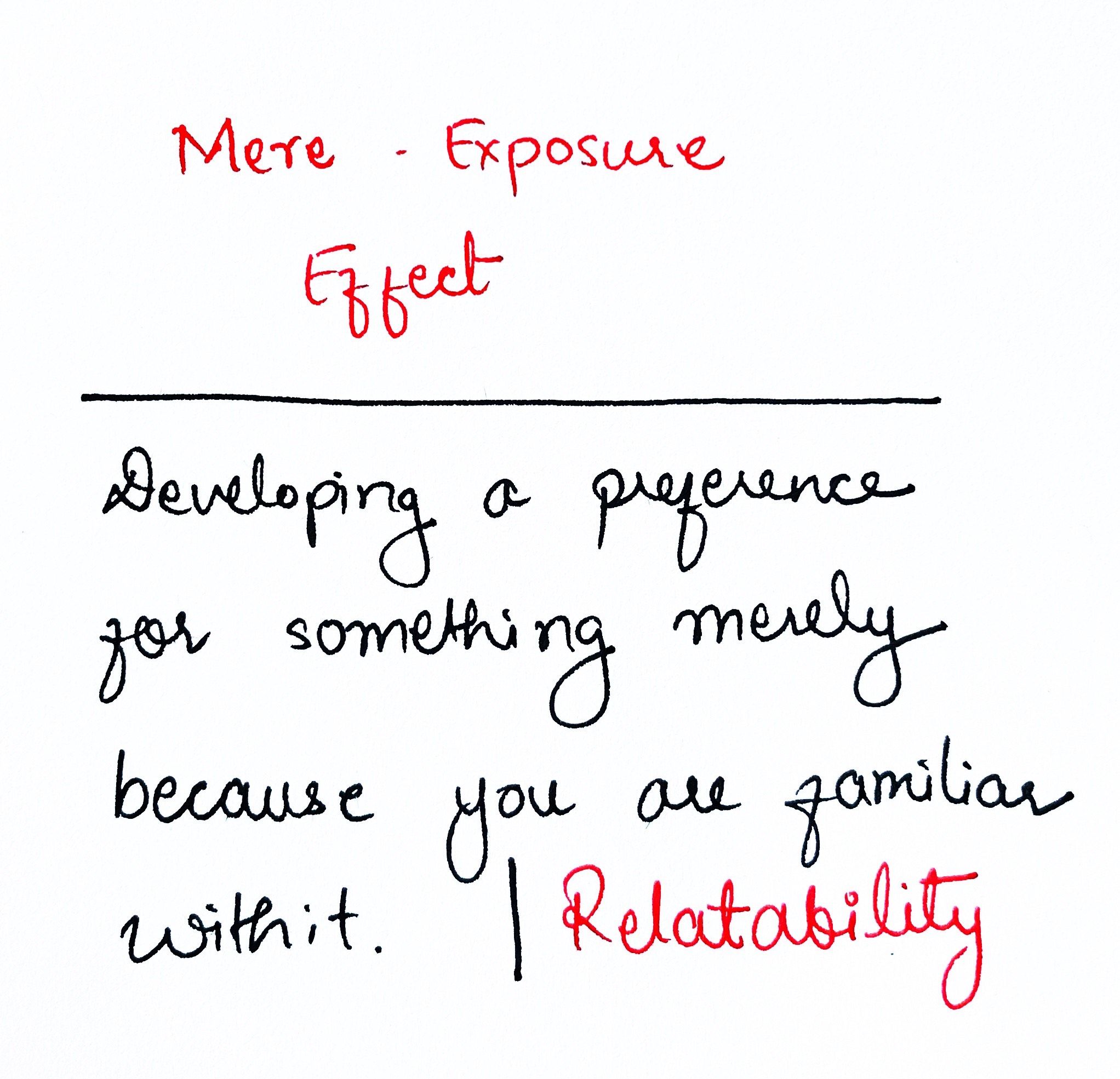 Would you care to hear a story you already know?

It's important to pay attention to the novelty factor in the story.

The most boring love story ever:

Rahul and Ria grew up together as neighbors. Eventually they fell in love and sought permission from their parents to marry. Both families knew each other well. Hence, the families agreed. Rahul and Ria got married and lived happily ever after.

Would you care to hear such a story?

Probably not, as there is no tension, no thrill, it won't be interesting enough to hear.

One of the most popular love stories:

"Romeo-Juliet" - A tragic love story where two teenagers fall in love and commit suicide due to their families' ongoing feud.

Romeo meets Juliet at a party and falls in love with her instantly. They are shocked to discover they are sworn enemies due to their feuding families. Friar Laurence marries Romeo and Juliet.

Romeo goes to celebrate his marriage with a few friends. But gets into a fight with Juliet's cousin, Tybalt. Tybalt kills one of Romeo's friends. Romeo avenges his death by killing Tybalt.

Romeo is banished by the Prince for killing Tybalt. Romeo and Juliet are separated and heartbroken. They want to be together by all means. With Friar Laurence's help Juliet comes up with a plan.

Juliet fakes her death and lies in a tomb waiting for Romeo to come so they can run away together. Romeo doesn't receive the message about the plan, so thinks Juliet has actually died. He sees Juliet in her tomb, 'dead'. Romeo drinks poison so he can be with Juliet in death. Julliet wakes up to discover Romeo is dead. She kills herself with his dagger.

Both their families vow never to argue again.

So, if you look at this "Romeo-Juliet" story. There is a whole lot of drama, tension, and emotions. Thus making it interesting for the audience.

Aristotle said that great stories have a gap between what is and what a character wants to be. And it's the storyteller's job to fill that gap with some tension and drama to make it interesting. 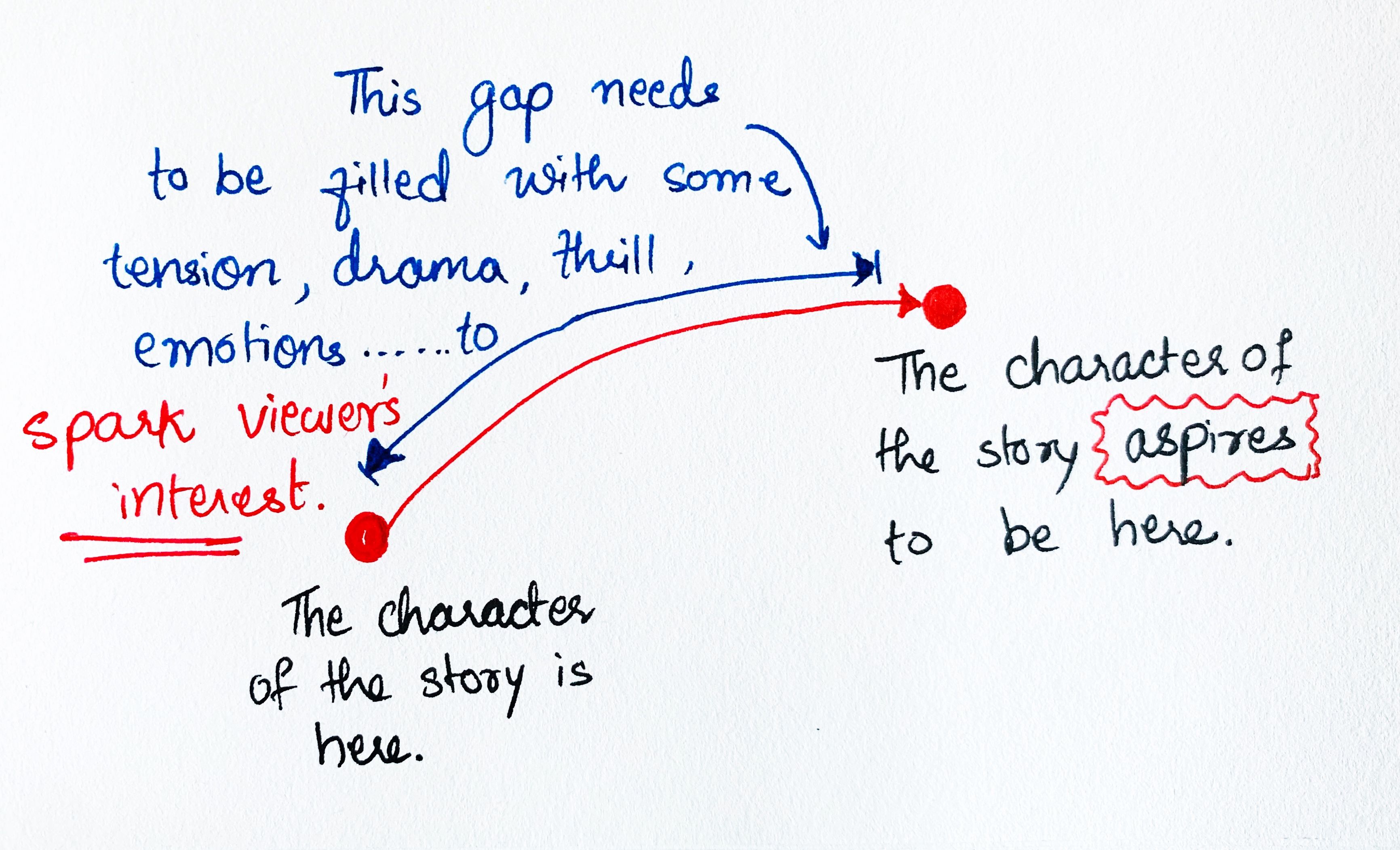 The purpose of any writing (especially blogs and social media) is to get the message across to the reader.

It's not an exhibition of the writer's knowledge of vocabulary.

Let's take a look at the reading level of bestselling author's books. This beautiful compilation is by Shane Snow. 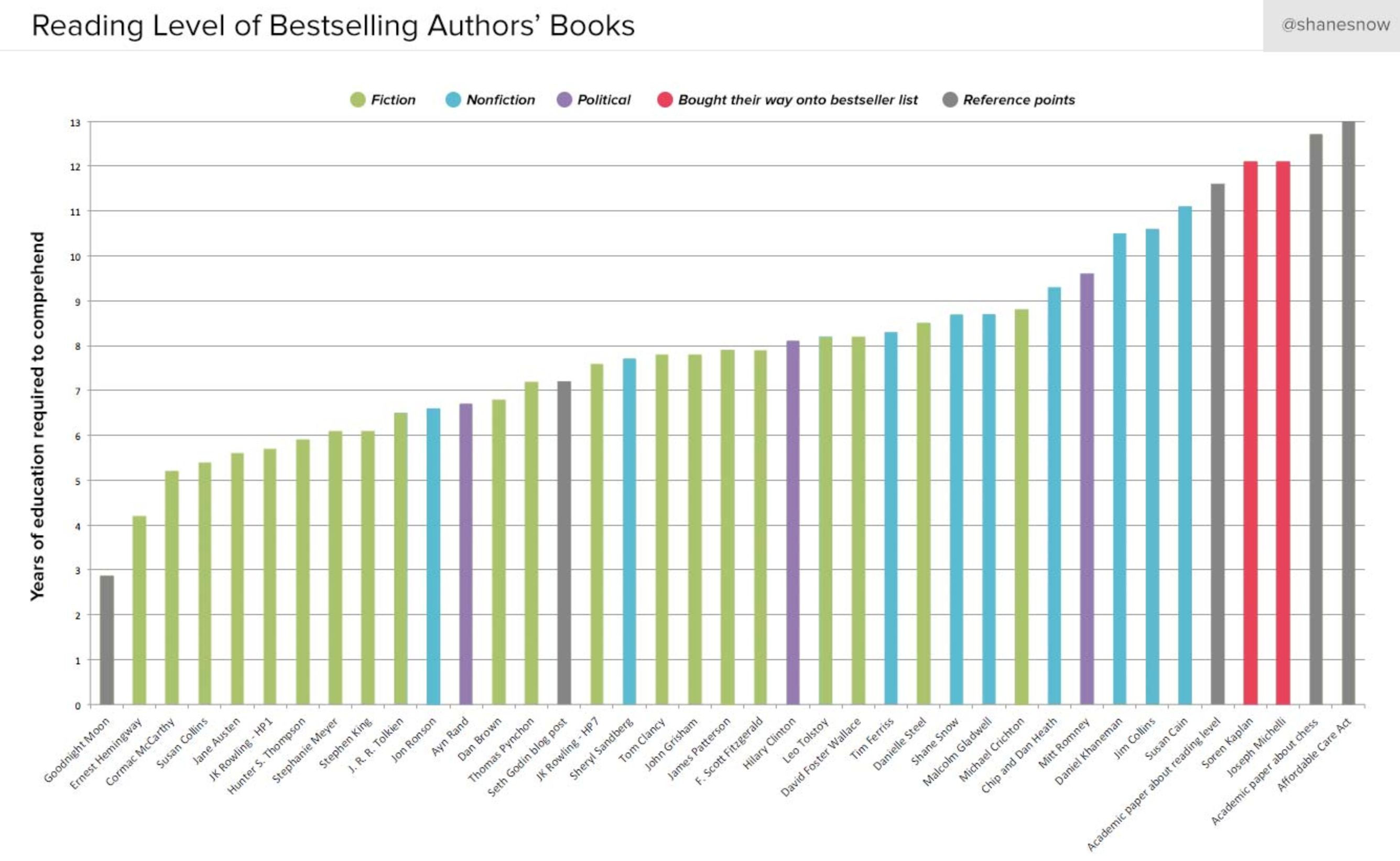 Ernest Hemingway, the Pulitzer- and Nobel Prize-winning novelist whose work shaped 20th-century fiction wrote at the readability level of Grade 4.

Simple and easy to understand writing helps to keep the story flowing.

Readers don't like to read the stuff that's difficult to comprehend.

There are lots of editors available out there that can help you track the reading level of your article.

My favorite place to write is in the Hemingway Editor.

That's because it makes sure that my readers will focus on my message, not my prose.

It grades my writing based on reading level.

It also tells me about the usage of adverbs, passive voice, and complexity of phrases.

Here is how it scores the article. 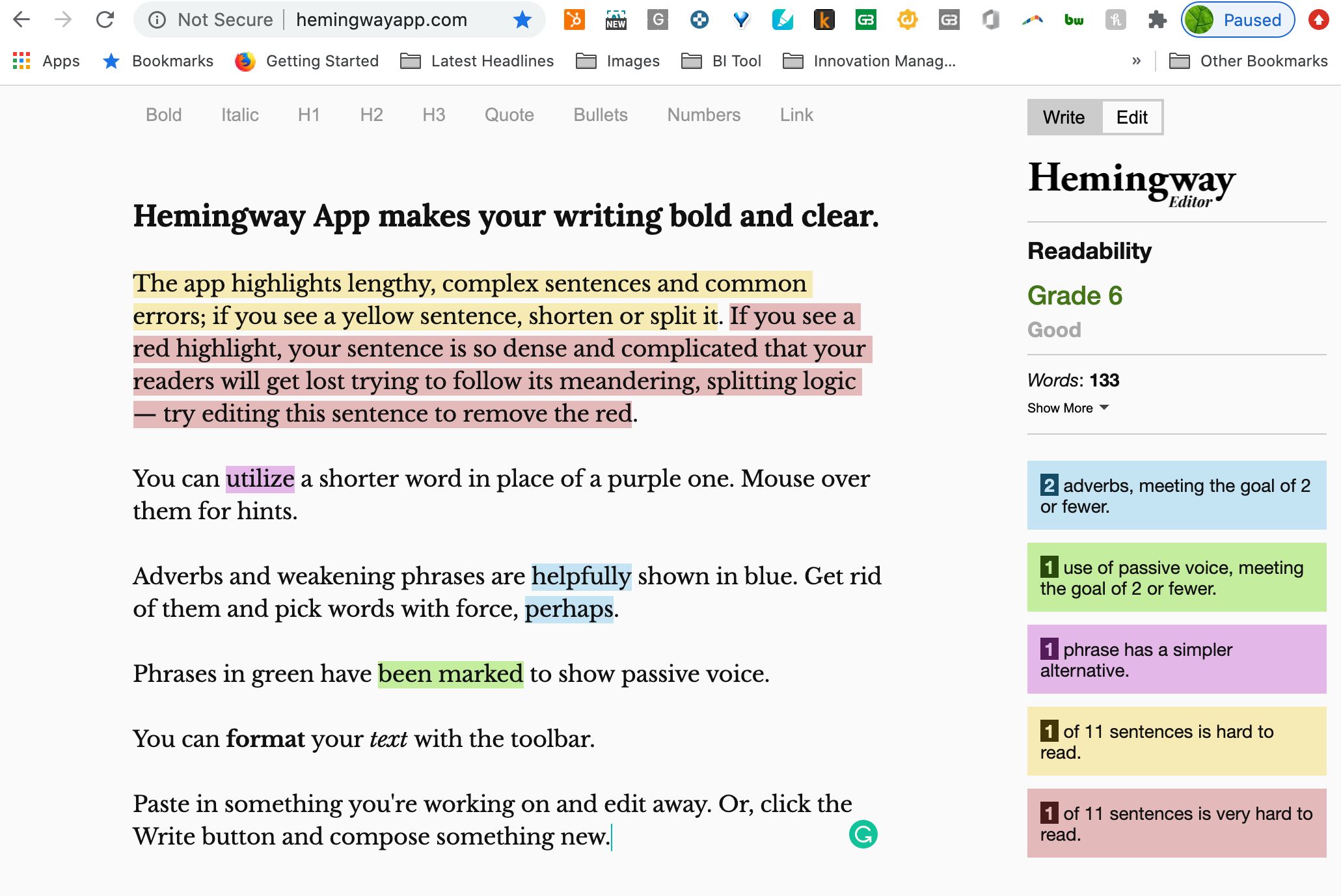 The idea here is to write the same piece using half the number of words.

So if your original piece is written in 50 words, try to bring it down to 25.

That helps in removing the sludge.

Let's understand this using an example as Shane explains:

After removing the sludge the same piece shall look like: (23 words long)

"The disparity is likely because Twitter has become a media echo chamber. It'll be interesting to see how Twitter competes against other platforms."

If you look at the two pieces, same message got conveyed concisely in the second one. Words are costly my friend. Let's write only what's worth the reader's time.

Shane Snow suggested an effective method to maximize the response and reach of your writing.

Test the story with different titles and maybe a few changes here and there.

Let's say you created the story with three different titles.

Now test the three different versions with groups A, B, and C.

Say story with the title 2 performed the best.

So, share the story titled 2 with the largest chunk of the audience. 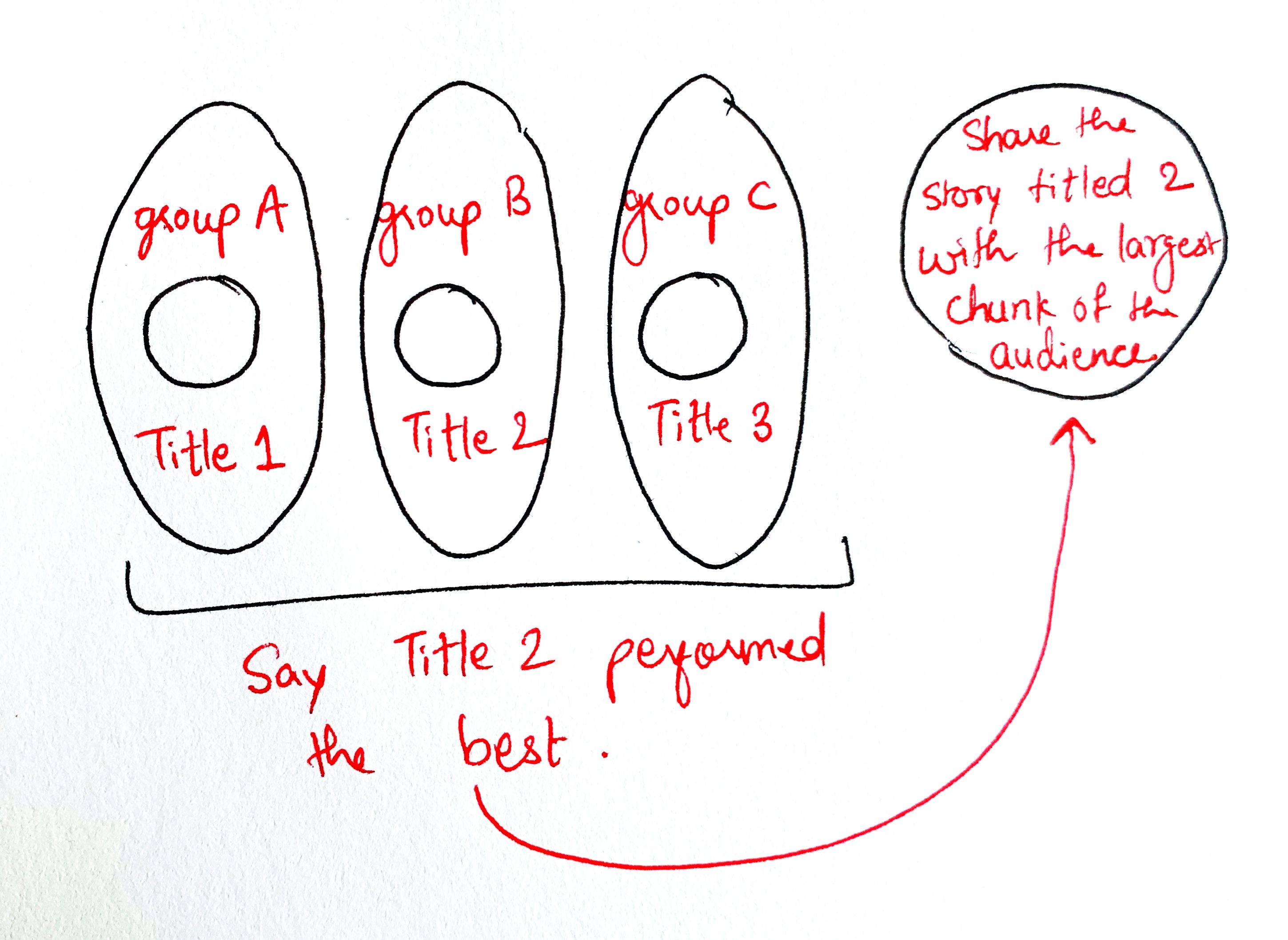 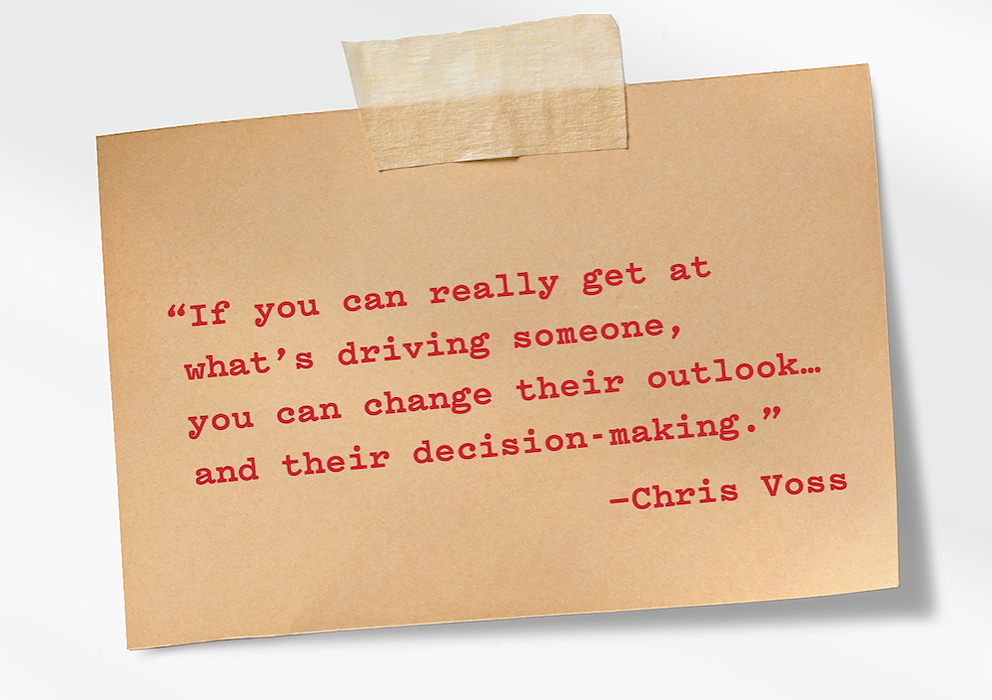 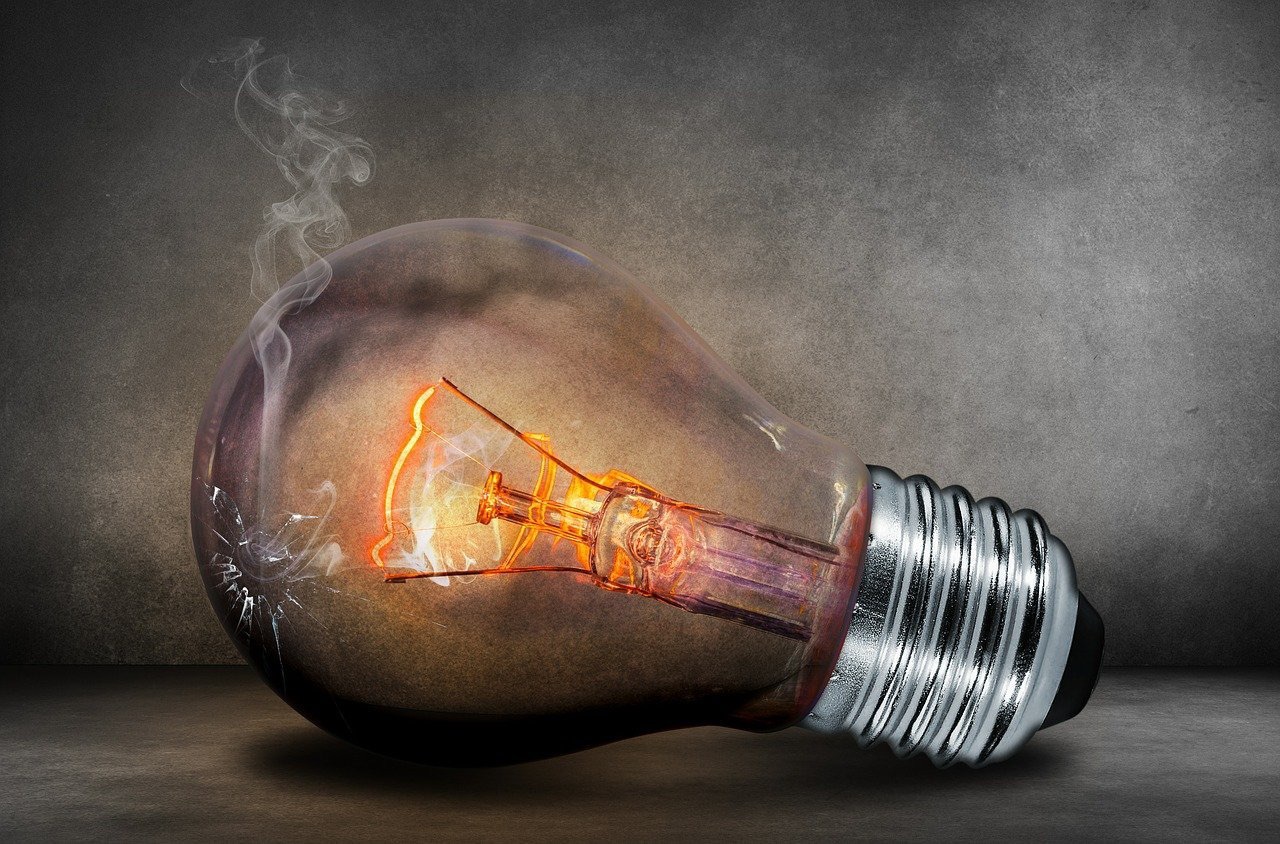