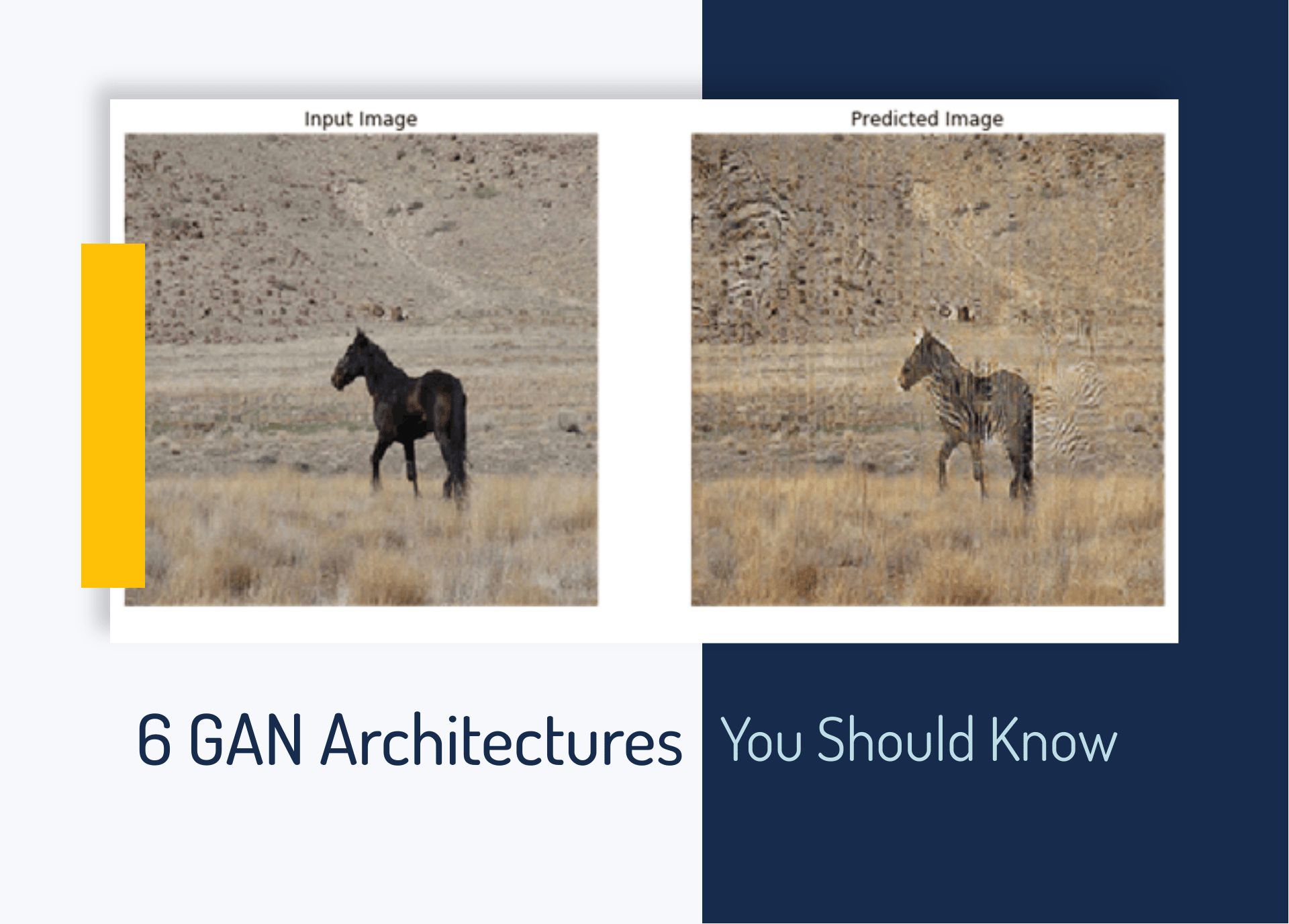 Generative Adversarial Networks (GANs) were first introduced in 2014 by Ian Goodfellow et. al. and since then this topic itself opened up a new area of research.

Some of the most popular GAN formulations are:

In this article, we will talk about some of the most popular GAN architectures, particularly 6 architectures that you should know to have a diverse coverage on Generative Adversarial Networks (GANs).

The primary objective of the Generative Model is to learn the unknown probability distribution of the population from which the training observations are sampled from. Once the model is successfully trained, you can sample new, “generated” observations that follow the training distribution.

GAN comprises of two independent networks, a Generator, and a Discriminator. 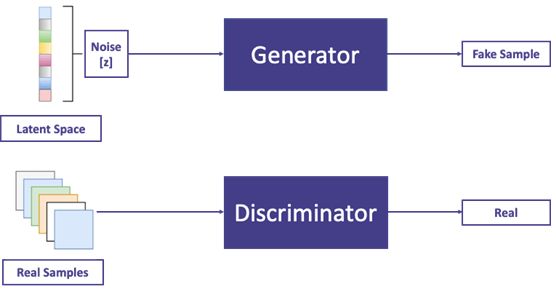 The beauty of this formulation is the adversarial nature between the Generator and the Discriminator. 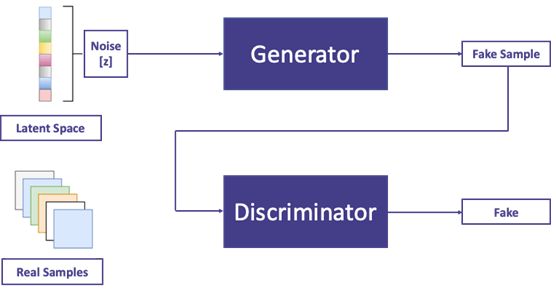 CycleGAN is a very popular GAN architecture primarily being used to learn transformation between images of different styles.

As an example, this kind of formulation can learn:

FaceApp is one of the most popular examples of CycleGAN where human faces are transformed into different age groups.

The goal is to learn a mapping function G: X-> Y such that images generated by G(X) are indistinguishable from the image of Y. This objective is achieved using an Adversarial loss. This formulation not only learns G, but it also learns an inverse mapping function F: Y->X and use cycle-consistency loss to enforce F(G(X)) = X and vice versa.

While training, 2 kinds of training observations are given as input.

Fig5: The training procedure for CycleGAN.

As I have mentioned earlier there are 2 kinds of functions being learned, one of them is G which transforms X to Y and the other one is F which transforms Y to X and it comprises two individual GAN models. So, you will find 2 Discriminator function Dx, Dy.

Along with Adversarial Loss, CycleGAN uses cycle-consistency loss to enable training without paired images and this additional loss help the model to minimize reconstruction loss F(G(x)) ≈ X and G(F(Y)) ≈ Y

So, All-in-all CycleGAN formulation comprises of 3 individual loss as follows:

and as part of optimization, the following loss function is optimized.

Let’s take a look at some of the results from CycleGAN. As you see, the model has learned a transformation to convert an image of a zebra to a horse, a summer time image to the winter counterpart and vice-versa.

Following is a code snippet on the different loss functions. Please refer to the following reference for complete code flow.

Following is an example where an image of horse has been transformed into an image that looks like a zebra.

Tensorflow has a well-documented tutorial on CycleGAN. Please refer to the following URL as reference

Can you guess which image (from the following 2 images) is real and which one is generated by GAN? 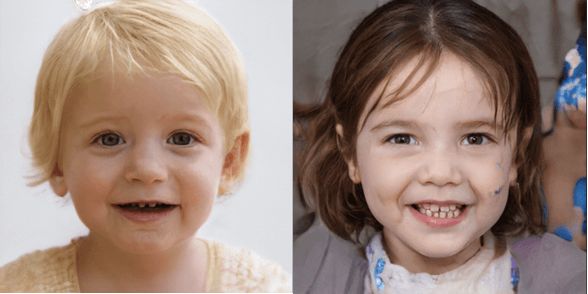 The fact is that both the images are imagined by a GAN formulation called StyleGAN.

The easiest way for GAN to generate high-resolution images is to remember images from the training dataset and while generating new images it can add random noise to an existing image. In reality, StyleGAN doesn’t do that rather it learn features regarding human face and generates a new image of the human face that doesn’t exist in reality. If this sounds interesting, visit https://thispersondoesnotexist.com/ Each visit to this URL will generate a new image of a human face who doesn’t exist in the universe. 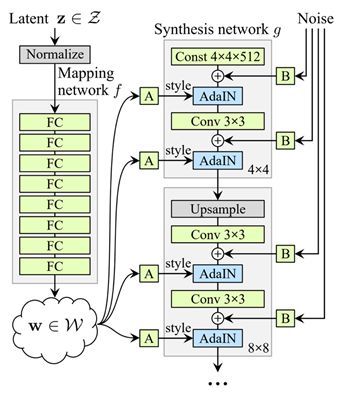 This figure depicts the typical architecture of StyleGAN. The latent space vector z is passed through a mapping transformation comprises of 8 fully connected layers whereas the synthesis network comprises of 18 layers, where each layer produces image from 4 x 4 to 1024 x 1024. The output layer output RGB image through a separate convolution layer. This architecture has 26.2 million parameters and because of this very high number of trainable parameters, this model requires a huge number of training images to build a successful model.

where each feature map xi is normalized separately, and then scaled and biased using the corresponding scalar components from style y. Thus the dimensionality of y is twice the number of feature maps on that layer.

PixelRNN is an example of the auto-regressive Generative Model.

In the era of social media, plenty of images are out there. But it’s extremely difficult to learn the distribution of natural images in an unsupervised setting. PixelRNN is capable of modeling the discrete probability distribution of image and predict the pixel of an image in two spatial dimensions.

We all know that RNNs are powerful in learning conditional distribution, especially  LSTM is good at learning the long-term dependency in a series of pixels. This formulation works in a progressive fashion where the model predicts the next pixel Xi+1 when all pixels X0 to Xi are provided. 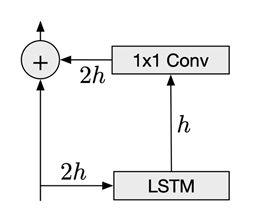 The Figure depicts the individual residual blocks of pixelRNN. It’s trained up to several depths of layers. The input map to the PixelRNN LSTM layer has 2h features. The input-to-state component reduces the number of features by producing h features per gate. After applying the recurrent layer, the output map is upsampled back to 2h features per position via a 1 × 1 convolution and the input map is added to the output map.

Generative Adversarial Networks are good at generating random images. As an example, a GAN which was trained on images of cats can generate random images of a cat having two eyes, two ears, whiskers. But the color pattern on the cat could be very random. So, random images are often not useful to solve business use cases. Now, asking GAN to generate an image based on our expectation, is an extremely difficult task.

As an example, the textual description has been transformed into a 256-dimensional embedding and concatenated with a 100-dimensional noise vector [which was sampled from a latent space which is usually a random Normal distribution].

This formulation will help the Generator to generate images that are aligned with the input description instead of generating random images.

For the Discriminator, instead of having the only image as input, a pair of image and text embedding are sent as input. Output signals are either 0 or 1. Earlier the Discriminator’s responsibility was just to predict whether a given image is real or fake.

Now, the Discriminator has one more additional responsibility. Along with identifying the given image is read or fake, it also predicts the likelihood of whether the given image and text aligned with each other.

To fulfill the purpose of the 2-fold responsibility of the Discriminator, during training time, a series of different (image, text) pairs are given as input to the model which are as follows:

The training dataset used for the training has image along with 10 different textual description that describes properties of the image.

The followings are some of the results from a trained text-2-image model.

In recent times, DiscoGAN became very popular because of its ability to learn cross-domain relations given unsupervised data.

Now, building a Machine Learning model to figure out such relation given unpaired images from 2 different domains is an extremely difficult task.

In recent times, DiscoGAN had shown promising results in learning such a relation across 2 different domains.

The core concept of DiscoGAN is very much similar to CycleGAN:

Like CycleGAN, DiscoGAN is also built on the fundamental of reconstruction loss. The idea is that when an image is transformed from one domain to another and then transformed back to the original domain, the generated image should be as close as the original one. In this case, the quantitative difference is considered as the reconstruction loss and during training, the model tries to minimize this loss.

So, the model comprises of two GAN networks called GAB  and GBA . In the above figure, the model is trying to learn the cross-domain relation in terms of their direction. After the reconstruction of an image, the direction should be the same as the original one.

Earlier, in vanilla GAN, we have seen following min-max optimization formulation where the Discriminator is a binary classifier and is using sigmoid cross-entropy loss during optimization.

As mentioned earlier, often this formulation causes vanishing gradient problems for data point which are at the correct side of the decision boundary but far away from the dense area. The Least Square formulation addresses this issue and provides more stable learning of the model and generate better images.

Following is the reformulated optimization formulation for lsGAN where:

lsGAN has a huge advantage compared to vanilla GAN. In vanilla GAN, as the Discriminator uses binary cross-entropy loss, the loss for an observation is 0 as long as it’s at the correct side of the decision boundary.

This penalization forces the Generator to generate samples towards the decision boundary. Along with that it also removes the problem of vanishing gradient as the far-away point generates more gradients while updating the Generator.

One thing is common in all the GAN architectures we have talked about. Each one of them is built on the principle of adversarial loss and they all have Generator and Discriminator which follows the adversarial nature to fool each other. GANs has shown tremendous success over the last few years and became one of the most popular research topics in machine learning research community. In future, we will see a lot of progress in this domain.

The following Git repository has consolidated an exclusive list of GAN papers.

This article was originally written by Shibsankar Das and posted on the Neptune blog where you can find more in-depth articles for machine learning practitioners.