The Intersection of Blockchain, Internet of Things, and Artificial Intelligence

We have been living in the digital era of the internet, that is evolving with each passing day and with the advancement in technology, the inhibiting issues of the modern age internet have been liberated with the amalgamation of Blockchain, AI and IoT.

So, without wasting much time, let’s begin!

This blog will talk about How Blockchain, AI and IoT would come together to radiate the most recurring impact on the business industry?

Going by the stats, there is a huge scope that businesses can relate to. So, if you own a startup or an enterprise going by this technological mix would open horizons for your business in the near future.

Let’s dig in and understand what Blockchain, AI and IoT can bring to the table?

Before I talk about the actual convergence, let’s talk about Blockchain, AI and IoT in general.

I am kicking off with blockchain since it has been the most talked-about technology among the rest.

Blockchain has a synonym with technology evolution and how it has impacted industries from healthcare to supply chain to retail by adding a layer of security and transparency into their processes. It has been one of the most loved technologies in recent times for entrepreneurs. The major advantages that we look through Blockchain are:

Though there have been technical recommendations to adopt and integrate blockchain in our existing business models, the adoption of blockchain could impose certain threats as there have been challenges faced by blockchain as a technology, let us understand what are they?

Challenges in the existing Blockchain Model:

The challenges imposed by blockchain could not be radiated for future implications and it has been said that it could be resolved with the convergence model of Blockchain, IoT and AI as mixing the capabilities of these radiating technologies could improvise the state of blockchain for better.

Key Features of Artificial Intelligence are:

There have been challenges that AI has been facing and the impact could be seen in the larger picture when businesses collaborate standalone with AI, let’s discuss the challenges faced by AI:

These challenges possess a threat for business models integrating the power of AI alone in the long run. So, what should be the business solution for this problem in the long run?

The convergence of Blockchain and AI would serve the purpose? 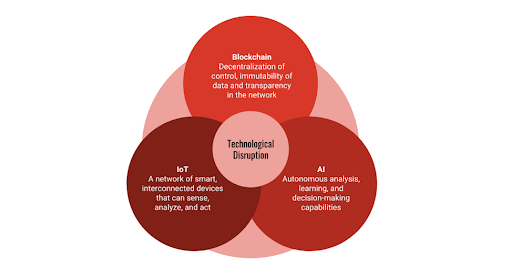 Meanwhile, let’s move on to IoT and how it has been revolutionizing the world?

IoT is also known as the Internet of Things which is the interconnection of physical devices that are connected through a network to identify themselves to other devices through RFID, sensor technologies, wireless technologies, and QR codes.

Key features that distinguish IoT from other competing technologies are:

There have been challenges that IoT is facing and it is a possibility that the convergence of Blockchain, IoT and AI could resolve major prohibiting issues.

Let’s look for now the incoming challenges faced by IoT:

The convergence of Blockchain, IoT and AI:

Now, we have talked about the challenges, key features of these three rampant technologies. The golden triad of Blockchain, AI and IoT have much more to offer if they are interwoven and interlinked together.

Let’s see how they can be amalgamated together for better future implications:

Artificial Intelligence or AI can be termed as intelligence that allows machines to learn and reason in ways that are possible only by humans. Combining this with the radiating powers of  IoT and you have a gradient system that is variably more interesting than either one by itself. The mountains of data points captured and registered by IoT can be seeped and analyzed by Artificial intelligence to discover meaningful and decisive patterns that would be, at best, difficult for humans to discover and alter. Better yet, the algorithms should improve with time to improvise on the current trends in technology.

On the other hand, Blockchain technology, which is useful much more than the basic field of bitcoin can be used to make unalterable, persistent, and searchable records or transactions, contracts and official documents.

Combine these together and you can perceive a new view of the future: a world where data is gathered by multiple systems, analysed by artificial intelligence to take decisions on our behalf, which are then recorded and time-stamped on blockchain as a permanent record of decisions which are made and communicated on our behalf.