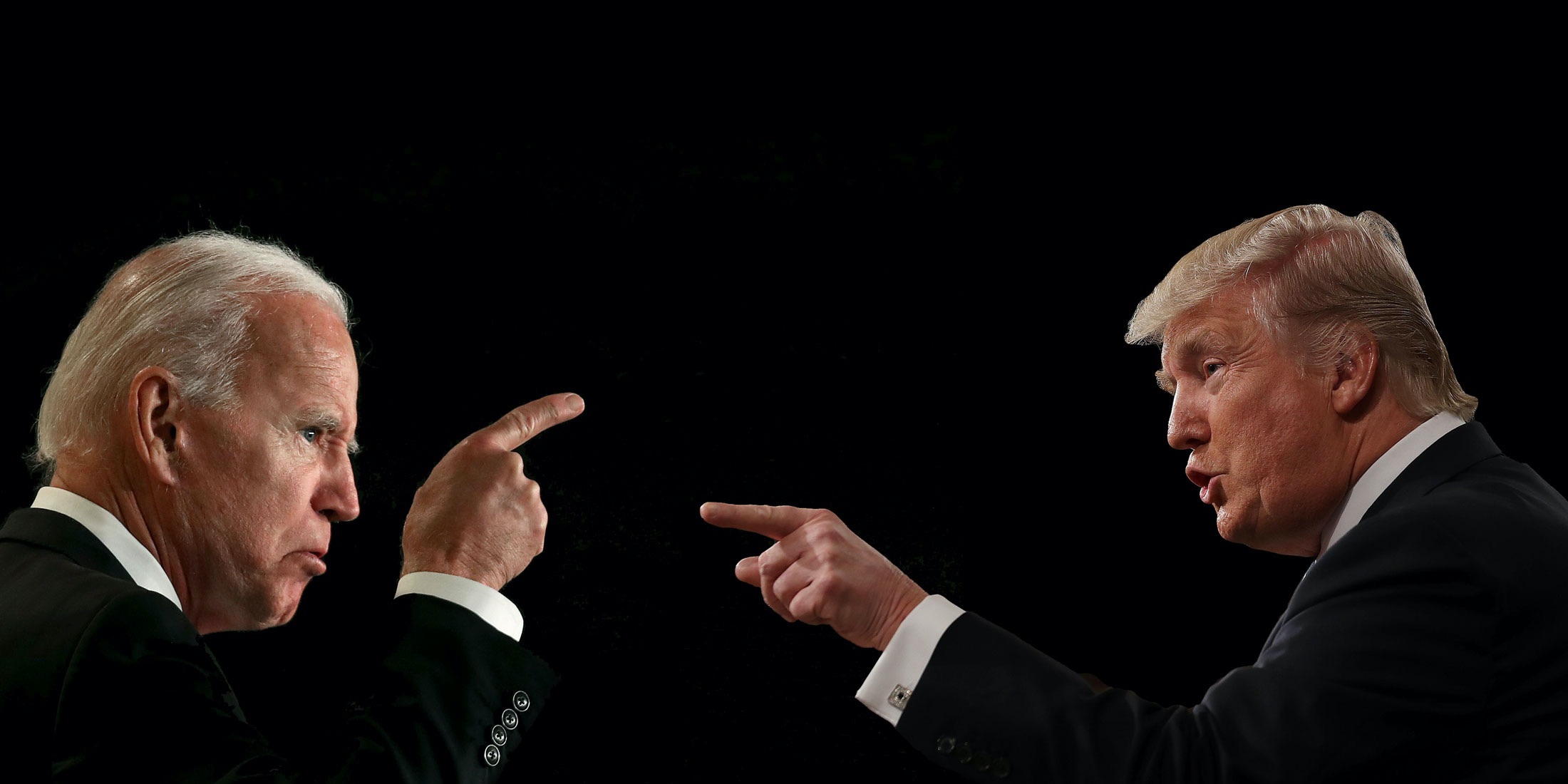 It takes no political analysis expertise to tell that public opinion is much influenced by what and how the politicians speak in public. In this article we have used 30 videos from the two politicians, relatively uniformly spread from January 2020 until today (September 2020), to demonstrate how speech analytics can be used to extract valuable conclusions from such data.

What have they been talking about?

First, lets see how the topics the two candidates have discussed can be visualized in a simple word cloud across time.

This is Trump's word cloud for some of the months in the selected period (January - September 2020): 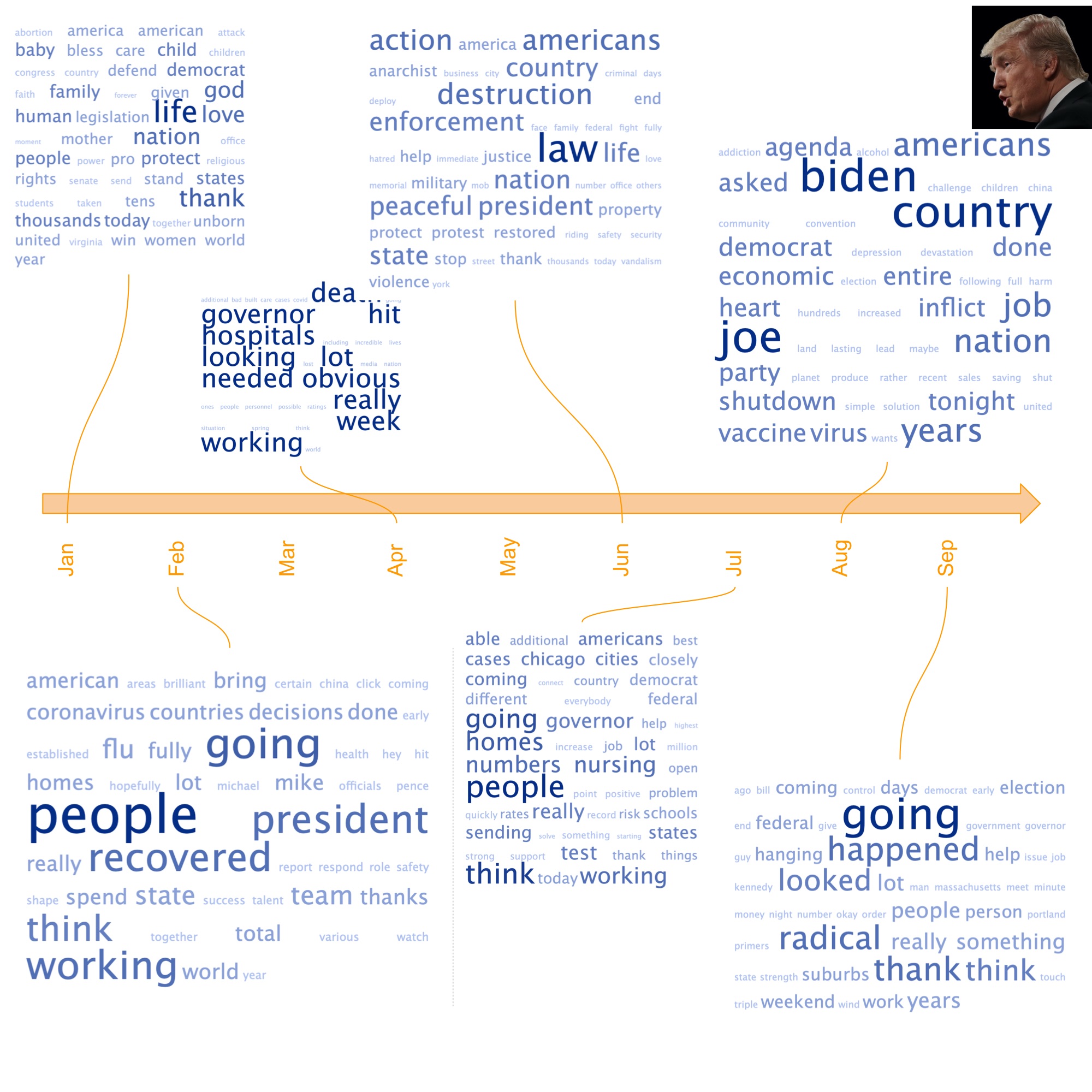 And this is Biden's: 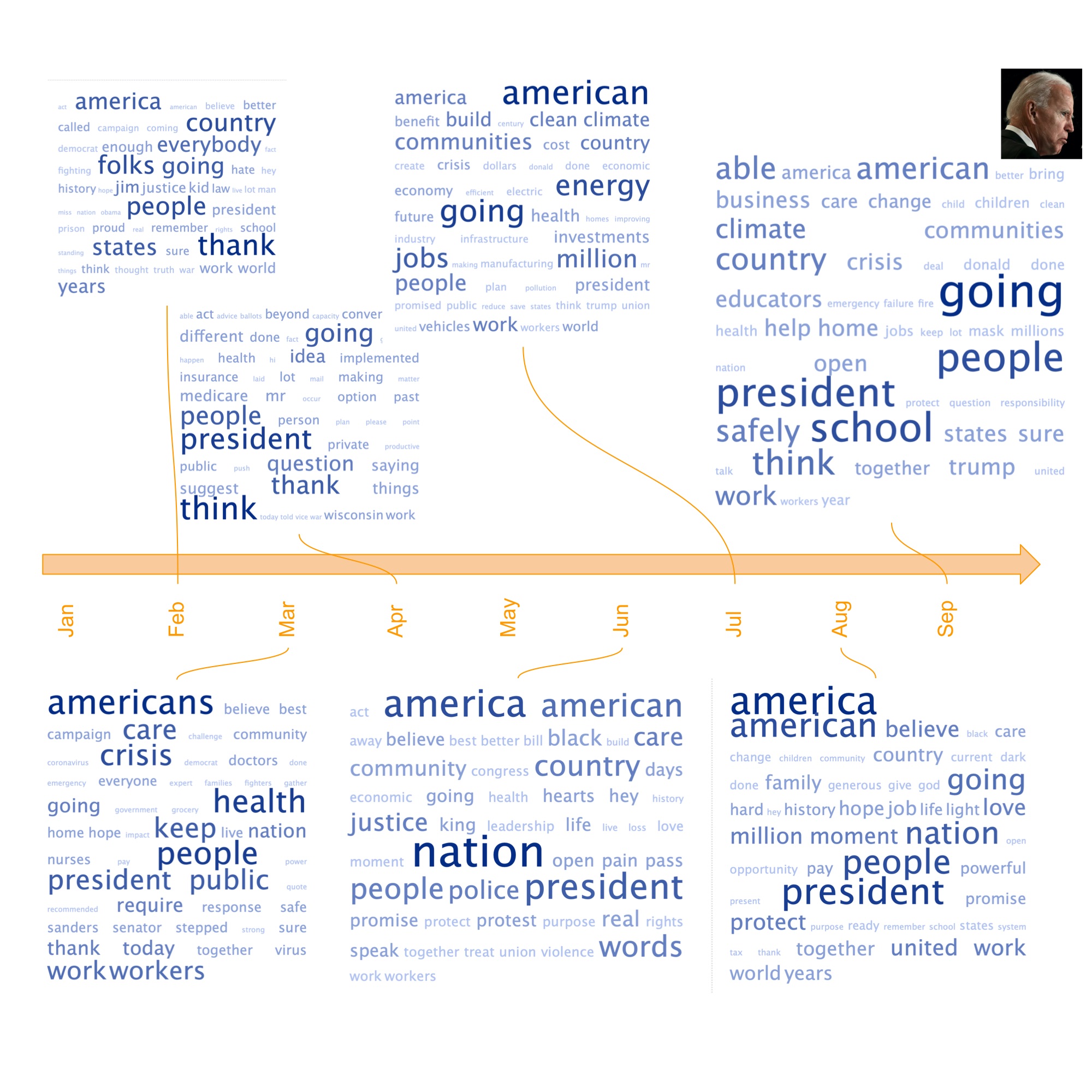 Some conclusions directly drawn from the diagrams above:

How did they sound?

Now let's focus a bit on their tone of voice. We have initially focused on two metrics, namely the emotional strength and positivity. Strength and positivity are two widely used emotional dimensions used in speech emotion recognition (SER) and psychology. For example, according to this emotional representation, anger is strong and negative, sadness is weak and negative and happiness is strong and positive. As described above, we have extracted these two emotional measures by combining Oliver API outputs.

Below is the two candidates' emotional strength graph. 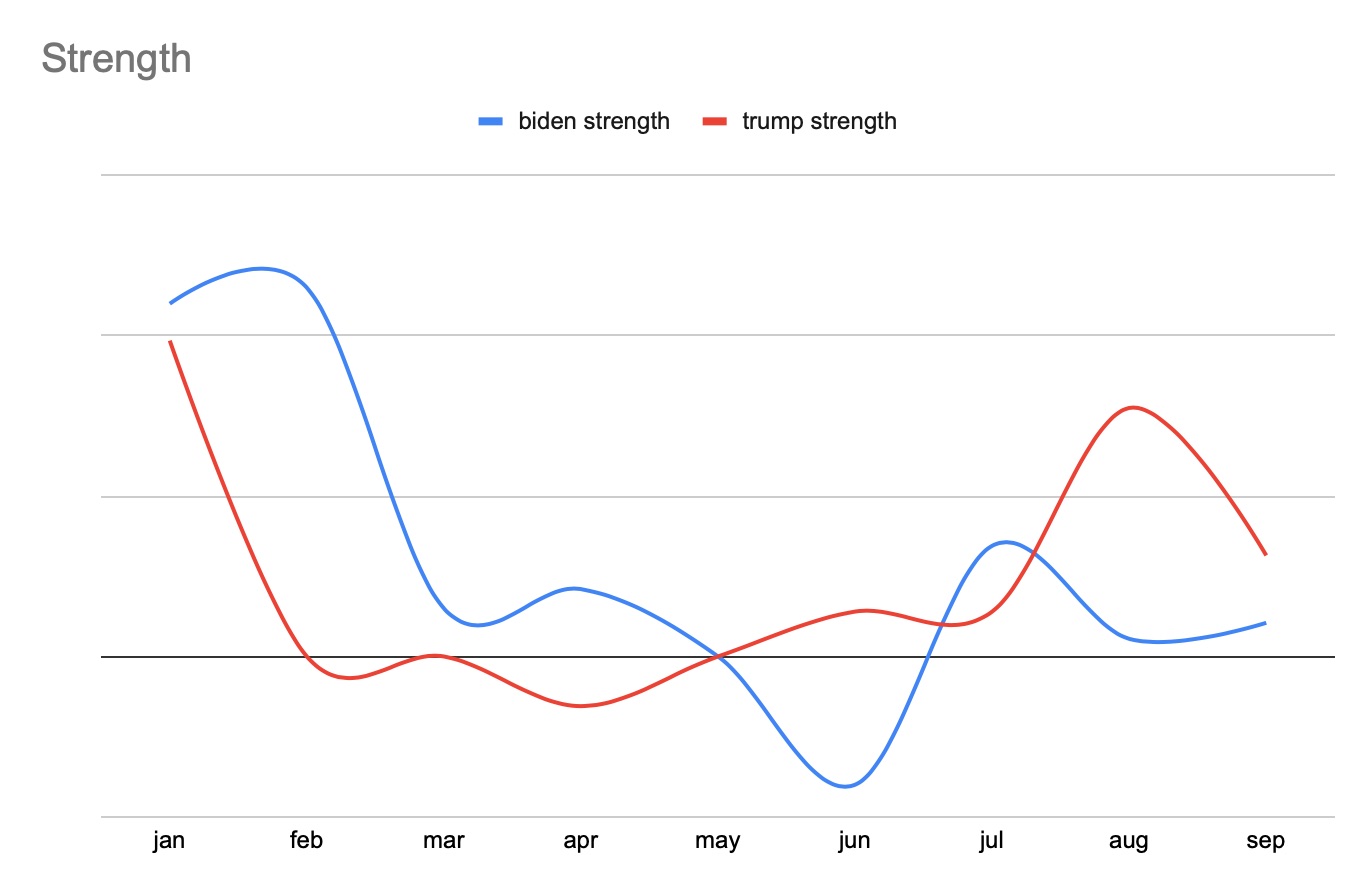 In both cases, candidates' speeches were more "energetic" in the beginning of the year. Trump's speeches are also becoming with higher emotional energy during the last two months. Also, Biden's emotional energy was minimized during June, which makes sense, if we consider his speeches about Floyd's death (where sadness was the most dominant emotional state).

Positivity is shown in the next graph: 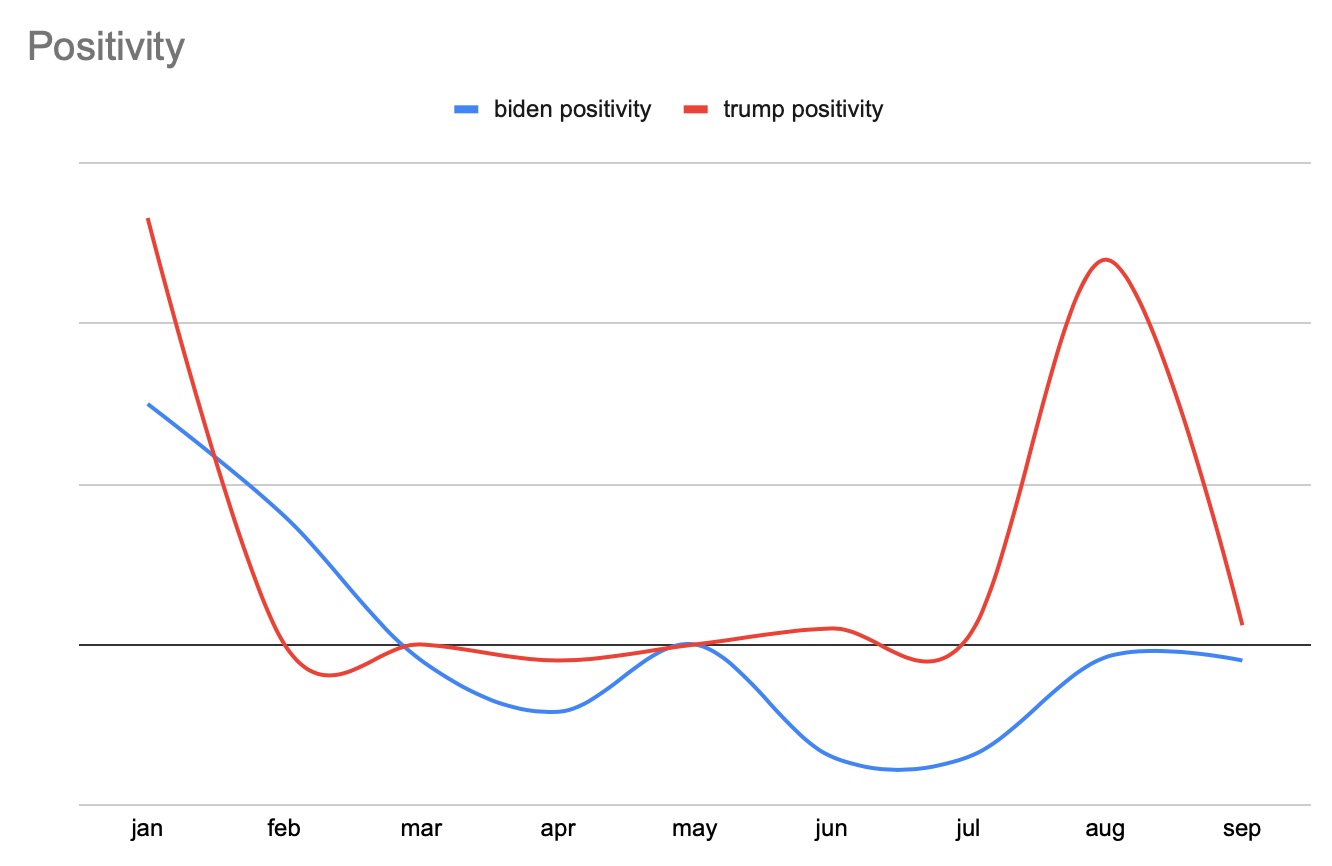 Again, Biden has the most negative emotions in June and July, while Trump is neutral from March to July and highly positive in the beginning of the year and during the last two months.

The graphs above show averages of emotional strength and positivity. So an extreme case where a candidate would be 50% negative and 50% positive in the same recording would be shown as neutral. For this reason, we may need a third diagram to describe the speakers' emotional state: emotional diversity. This is a measure of emotional fluctuations in the same speech (e.g. going from negative to positive emotion or from angry to happy). The following diagram shows the emotional diversity of the two candidates for all months: 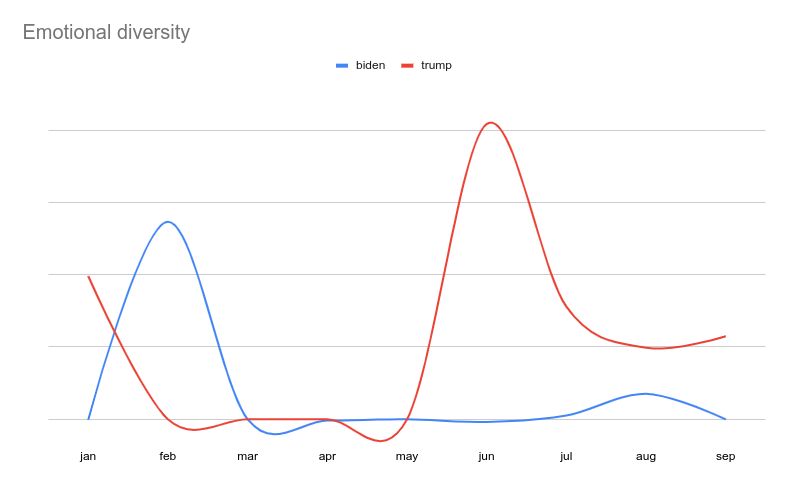 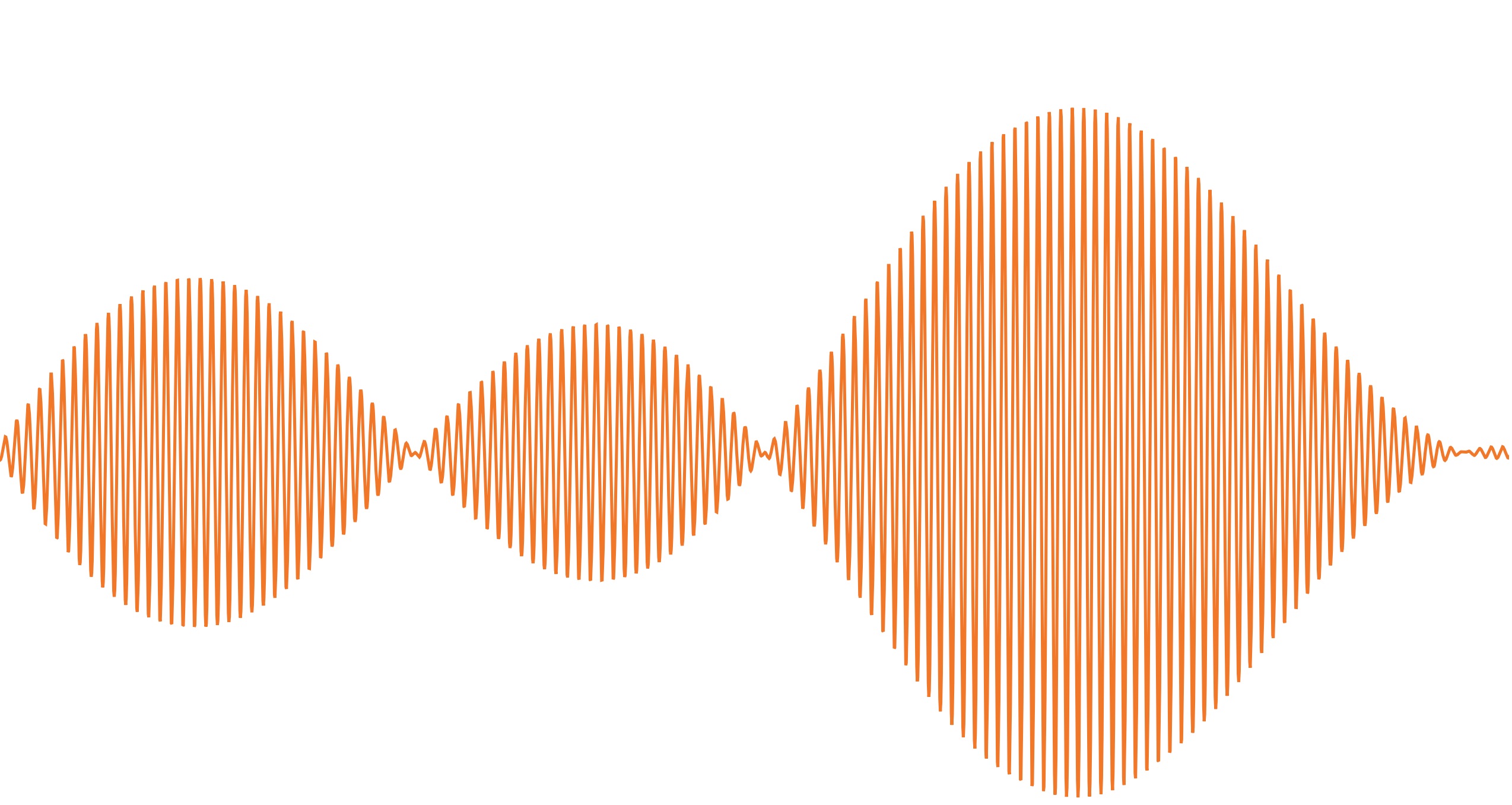