WTF did we do at the WTF Hackathon? 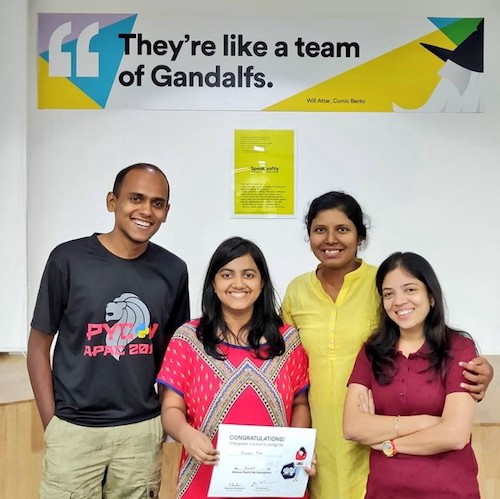 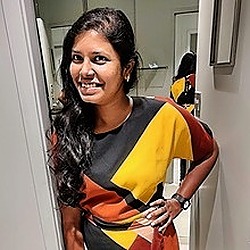 For all those days I have been working to bring diversity into the tech domain, here was a hackathon that was happening exclusively for women and how could I not be a part of it?! For most hackathons in the past, I used to mentor and attach myself to teams from colleges and help them out during technical difficulties. This time around, I badly wanted to participate because I had everything they asked for:

In my previous company, I used to log my work, thought process, learning, and design decisions in a google document. As days passed by, the document started growing, and in the end, I had a 36-page document from which I could never infer my learning/thought process.
One other issue was you can’t ensure all the employees log their work. On top of that, I used to set a reminder in Slack to remind my colleagues to make an entry. That’s when I wanted to turn it into a chatbot.

A chatbot that sits in your organization’s messaging platform, that pings you at regular intervals to get your status update. You can log your status with #hashtags and over a period it will generate a learning and productivity curve. Though this was the base of my idea, you will see how our kick-ass team transformed it over for the hackathon.

My team was the most diverse set from the whole hackathon. We don’t belong to the same company. We all became friends by meeting at various tech community events in Chennai.

Naren — The Senior Software consultant from TarkaLabs or The DevOps specialist as I know him :D gladly accepted to be a part of my team. In fact I didn’t even ask him before applying.

Krithika — She is my go-to person when it comes to #womenInTech. Her new found love for React.js came in handy for a team which has no front-end skills.

Bhuvana — Her new found passion to enter Software Development made the Founder of ThinkDiff S’kool reach out and become a part of my team.

After applying with iKeepLog, I wanted to increase the chances of getting a spot in the hackathon. We started a Whatsapp group and began discussing other ideas. By the time I applied the second idea the organizing members had called to inform that both the ideas got selected. I tried hard to form a second team but had to drop it towards the end.

Trust me, if you are planning to use a Whatsapp group for hackathon discussions, don’t! Call them up, meet in a common place and brainstorm. By the time we realized, it was already the day before the hackathon!

We listed out everything we exchanged over the calls and started connecting the major features to every new thought that popped up. By the end of the planning session we had a plan of execution for each member of the team.

As a woman who is struggling to bring diversity to tech communities, entering a room full of women who were equally pumped for a tech hackathon was a dream come true. We started the implementation after an energizing keynote and breakfast.

The mentors started coming around, heard our ideas and gave us different dimensions to approach and pitch the idea. Vaishnavi from Mad Street Den helped us crack the business aspects of the idea.

While I was struggling with Slack’s Documentation to bring the bot to life. Krithika started with the dashboard, Naren and Bhuvana immersed themselves into the backend implementation. At the end of Day 1, we had a slackbot which logs to a database and a backend API which generated a tag cloud from the logs. Naren worked late at night and got one version up in the server.

The 2nd day started with bringing more personality to the bot and a ping API for the bot to ping the user and lots of UI. While Krithika and Naren worked on the placement of UI components. I gave inputs for slides to answer the What ?, Why?, Who? And How? to Bhuvana. Once Bhuvana got the slides up, we ran it past Vaishnavi, and she gave a green signal and suggested a couple of more points.

This was the final part of any hackathon where it all came to an end. The pressure kicks in no matter how much you have prepared. When a lot pick pushed the Team No 1 to 13th and when you see lots of great ideas presented before you, no one can judge you for getting so nervous. The slides went up, and my hands went cold with a deep breath exiting my lungs, I regained my confidence to present the what, why, how and who of iKeepLog.

Cherry on the cake

I sensed the feeling of accomplishment among my team. I can assure you they were delighted that it all came together finally. We celebrated it with samosas and kachoris. When we settled back in for the results announcement, the crowd grew impatient as we neared the moment. When they announced that we were the runners-up, I was immediately on cloud nine! No words in this world can explain my emotion at that instant, so here is a video of the same.

How we produce code

The Error that kept us up

When you are sad but, your bot is not going to give up on you.

iKeeplog is not just a hackathon thing. We are going to work on it more to convert the prototype to an MVP.