What Could Be Causing Google Searches for “Bitcoin Halving” to Surge?

The whistle for “halve-time” is set to blow, with May 2020 creeping ever closer. For those operating in the crypto-verse the “halving/halvening”, is the talk of the office, with speculation as to what new heights the price of bitcoin will surge to taking center stage. This interest in 2020’s most anticipated crypto-event is seemingly mirrored in the volume of searches for “bitcoin halving” on Google Trends, with the increase in searches indicative of the excitement and pull bitcoin has across the globe. But what is the “halving” and what/who may be driving this surge in searches?

For those not within the industry, the bitcoin halving is an event that occurs every four years, where the bitcoin rewards generated for mining blocks on the bitcoin blockchain are halved.

This means that the quantity of bitcoins that can be mined by miners (those responsible for the computational power needed to unscramble the block hash’s and thus validate the transaction), will be cut from 12.5 to 6.25 bitcoin.

The halving is a deflationary mechanism that ensures the scarcity of bitcoins in circulation. Similar to gold, a finite resource, there will only be 21 million bitcoins in existence.

Conversely, regular fiat currency e.g. USD, EUR, CHF are not finite, as central banks can simply print more at will, making such currency in void of any intrinsic value. Thus, due to this ‘inbuilt scarcity mechanism’ subject to bitcoin, bitcoin holders are hoping for increased scarcity to fuel a bull-run. The next halving will be in May 2020. 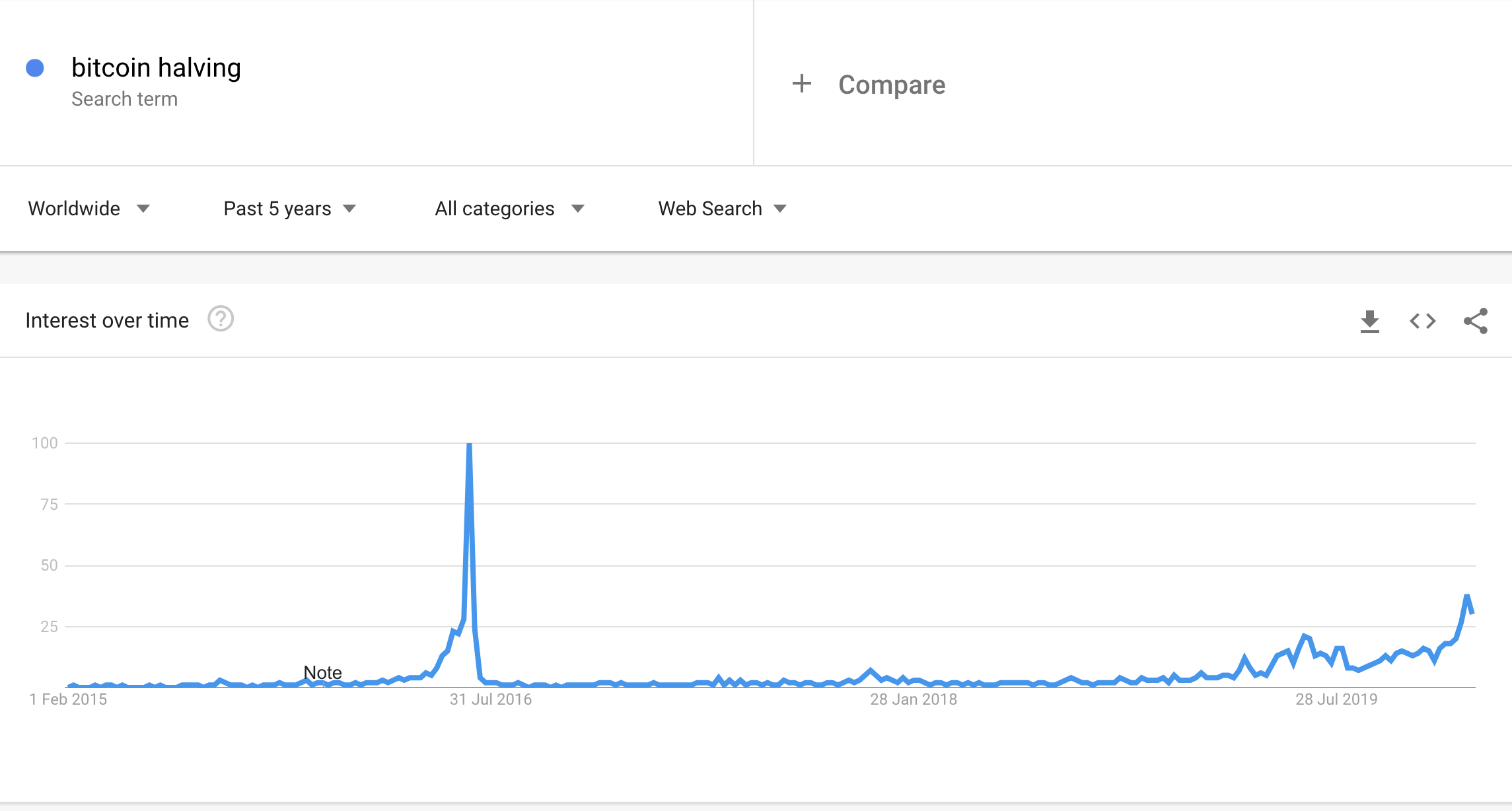 The sources behind the surge

According to Arcane Research: “The bitcoin halving is gaining more traction. There is now a clear indication that awareness of the concept is spreading to new people”.

The reason they provide for this greater “awareness of the concept” is that more and more people see bitcoin as a “cheap p2p payment network, anonymous currency, store of value, uncorrelated asset and digital gold.”

However, the question must be asked what and who may be behind this surge in interest? The following section will look at the roles geopolitical risk, millennials and profit play as possible reasons for this uptake in interest.

According to SIX Swiss Exchange, 80% of participants in their digital asset survey are expecting the demand for digital assets and crypto products to grow. Interestingly, their survey found that much of this new type of trading behaviour and interest in digital assets was influenced by foreign affairs. 74% of those surveyed believed that the US 2020 election would drive the demand for a change in trading activities, while 66% believed that a trade war would be the main cause for a change in trading.

Such findings mirror other cases where geopolitical risk was a main factor, with Iran and Venezuela prime examples. CVJ pointed out that the nature of bitcoin related searches are very much tied to price fluctuations — emphasizing bitcoin’s short-term, volatile nature. Thus, following the killing of the Iranian extremist Qassem Soleimani, an effective 100% increase in searches for “bitcoin Iran” began to emerge.

At the time the article was written, forecasts suggested that the country’s hyperinflation would reach 10million percent; indicating an interest born during a search for a “stable” currency. At present, the volume of bitcoin traded has subsided back to 563 bitcoins this week.

In countries like Iran or Venezuela, where state-incompetence has poisoned the populous’ belief in their own monetary system, bitcoin is of interest.

For clients of retail brokers and financial institutions, in the light of looming geopolitical risk, digital currencies seem to be an ever-more considered asset when constructing one’s portfolio.

Thus, such occurrences strongly point to the notion that people in country's burdened by geopolitical risk are looking to bitcoin as a store of value, with bitcoin’s anonymous and transfer-easy nature to move funds an additional incentive.

Another key motivator in this surge of interest in bitcoin and the halving may also be driven by demographics, millennials in particular. Millennials are generally classified as people born between 1981 and 1996 and are often said to be the first generation to be brought up with the internet but not defined by it.

They are seen as a generation wedged between the old and the new; no clearer is this when reviewing millennial economic and financial power. In a survey conducted by the US Federal Reserve, millennials make up nearly one quarter of the U.S. population yet hold a mere 3% of the country’s wealth and a disproportionate 16% of debt.

In comparison, baby boomers held 21% of U.S. wealth when they were at the same age as millennials are today. 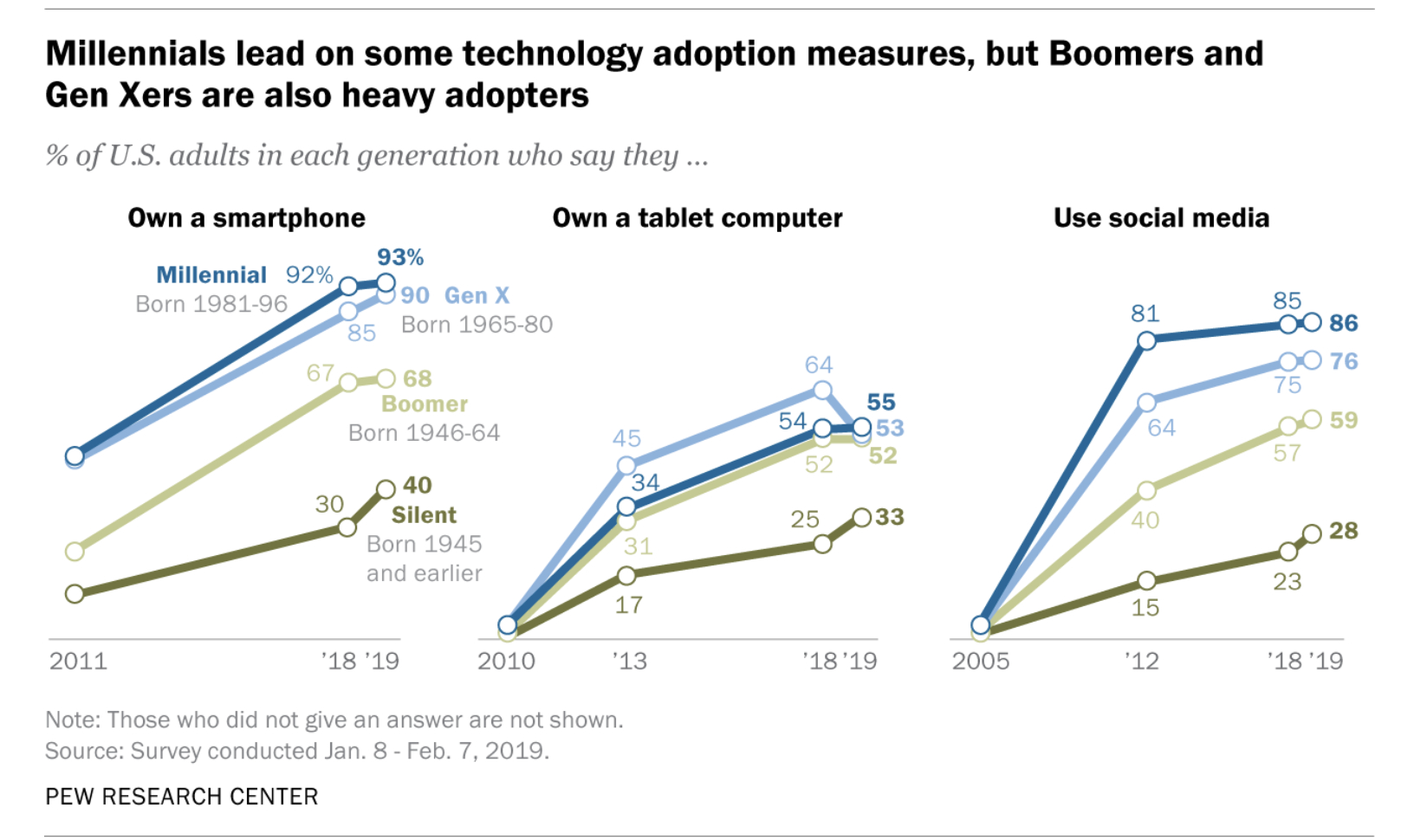 This technological proficiency coupled with comparatively worse financial and economic standing is seemingly very much key to an interest in bitcoin and crypto’s in general.

Studies on millennials by the Harvard Kennedy School found that 68% of millennials would consider ending their relationship with the traditional banking system and opt for a digital bank run by a tech company.

The reason for this distaste for the traditional banking system stems from the havoc wreaked by the 2008 financial crisis and the resulting difficulty to participate in traditional markets. Blockchain Capital, found that 18% of millennials hold bitcoin and that 27% of millennials prefer bitcoin to traditional stocks (both the largest group by demographic). Furthermore, 50% of millennials believe that bitcoin will be here to stay. 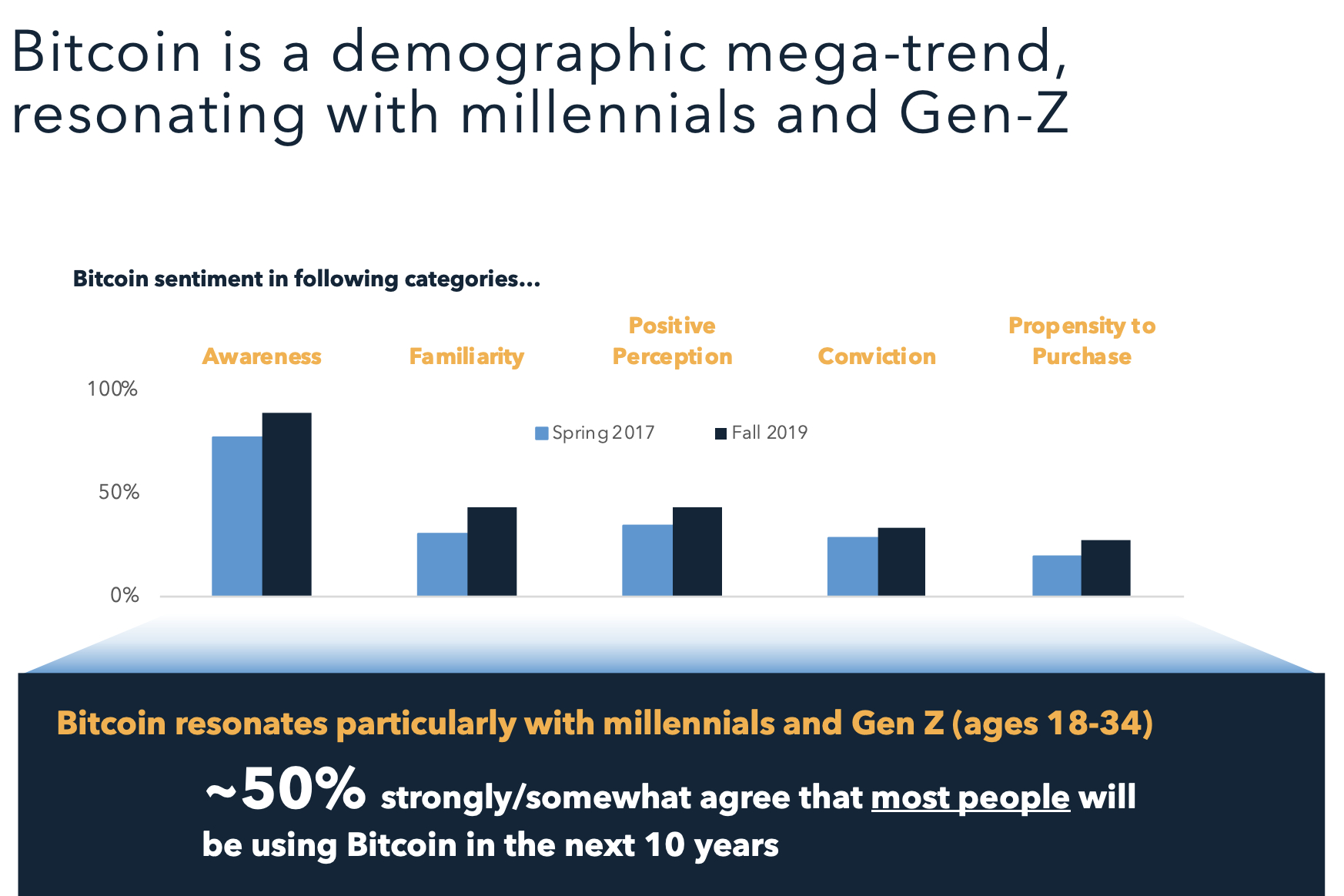 Naturally, one of the greatest motivators for getting involved in bitcoin and delving into crypto’s is linked to the large sums of profit that can potentially be made.

In essence, if one had invested $50 in 2009, they would have been worth $100 million at bitcoins all-time high in 2017. However, as mentioned above, the bitcoin halving in May 2020 is this year’s most anticipated event in the crypto-industry, for good reason.

According to CVJ, in the past two halving events that occurred in 2012 and 2016, the event was seemingly a key component in the rise in bitcoin price; with a bull-run occurring around a year prior to the event.

Current price predictions are generally positive, however, they clearly range from ‘realistic’ to ‘absurd’. According to the German bank BayernLB, the halving has the potential to set a new price record for bitcoin at $90’000.

Lastly, BitcoinEconomics.io published a graph detailing multiple prediction models detailing bitcoins price from 2013 to 2041, with the general trend-line suggesting that the price of bitcoin could rise to around $600,000 by 2030 (not directly dependent on halving events). 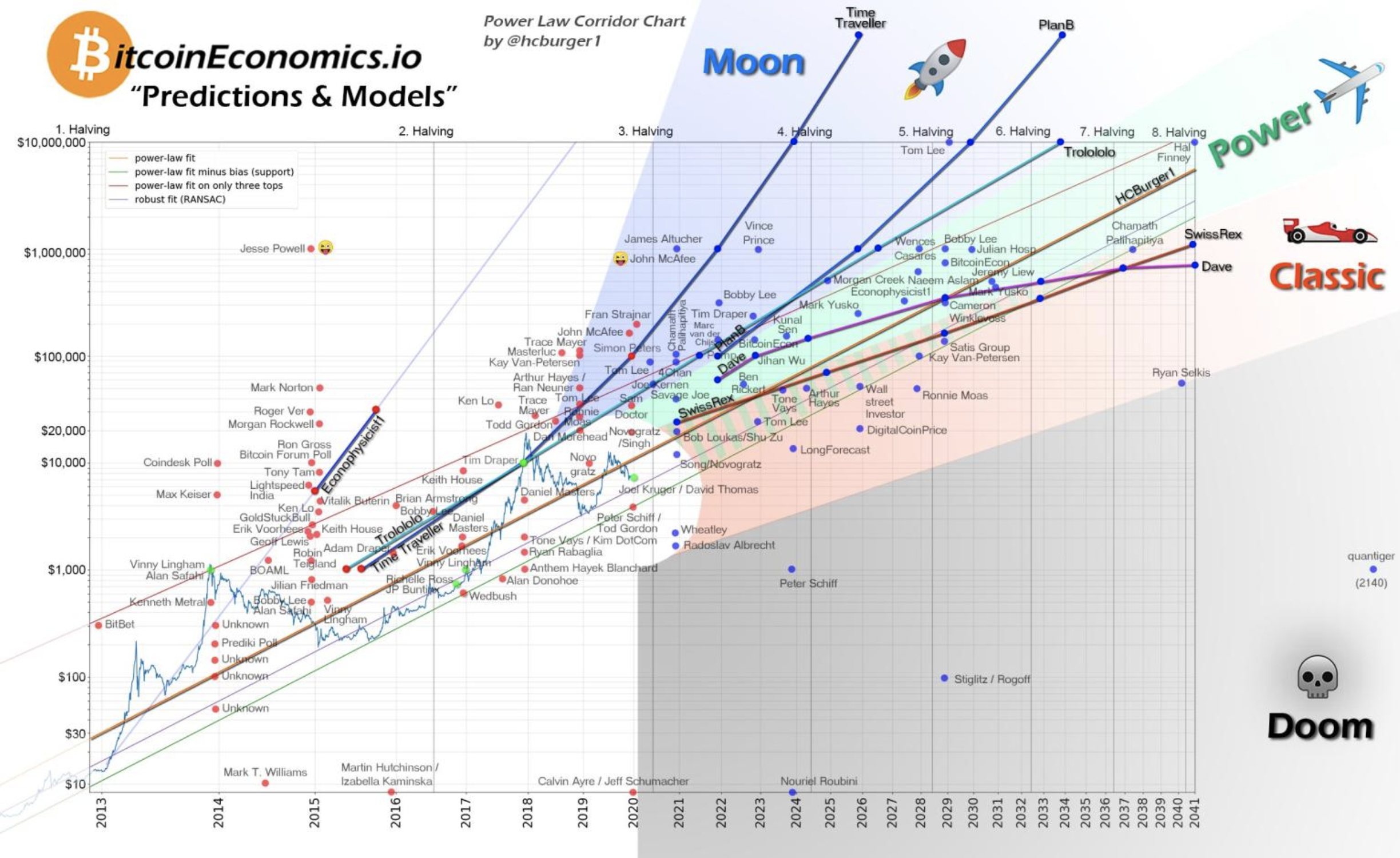 As mentioned above, the halving event is a scarcity and deflationary mechanism, ensuring that, like gold, an intrinsic value is apparent. Like many forms of assets, the price of bitcoin is subject to the laws of supply and demand and the halving event works similarly to a price shortage — scarcity drives value.

Furthermore, as the miners will half the rewards earned for their computational power, less supply will be available on the market. Thus, if demand remains a constant, price should increase.

However, although the event is known, the effect of these various forces e.g. amount sold by miners, fees earned by miners, market demand and alterations in liquidity etc. are not priced in.

Over the course of this article we have looked into the surge in searches for “bitcoin halving”, detailing what the halving was and looked into three factors that may be behind this increase in interest. Geopolitical risk seems to be a factor that is perhaps of greatest interest.

For decades the US dollar or the Swiss franc have been the safe-haven currencies throughout the world. However, as uncertainty grows and trust in traditional authorities’ wanes, bitcoin may be an asset worth looking into. Millennials are perhaps the real-life example of this growing distrust — the canaries in the coal mine who are already looking to new means of finance.

A hyper-competitive job-market, distrust in central authorities, marginal holding of traditional assets and technological proficiency are strong incentives to delve into bitcoin. Lastly, the lust for profits will always be a driving factor for most investments and there are few assets that have the growth potential that bitcoin has.

With predictions surpassing the wildest of dreams and with the crypto-industry becoming more understood and accessible, potential profits will be a key driving motivator behind the searches. Currently, the price of bitcoin has been on a rapid incline, with the bull-run pushing the price of bitcoin skyward very much underway.

At CNNMoney, Stephan dove into the media side of the crypto and blockchain world. Combining his passion for media and technology, Stephan has started to work as the lead-writer and content manager for MachinaTrader.

Previously, Stephan opened up Heriot-Watt Universities’ first online newspaper “Watts On” in 2017 and was elected to Head of Media for the Scottish Economic Conference 2019.

Hauxley, R R. “Should I Buy Bitcoin? 10 Reasons Why Bitcoin Is a Good Investment [2020].” Cryptomaniaks, 2018, cryptomaniaks.com/should-i-buy-bitcoin-good-investment.