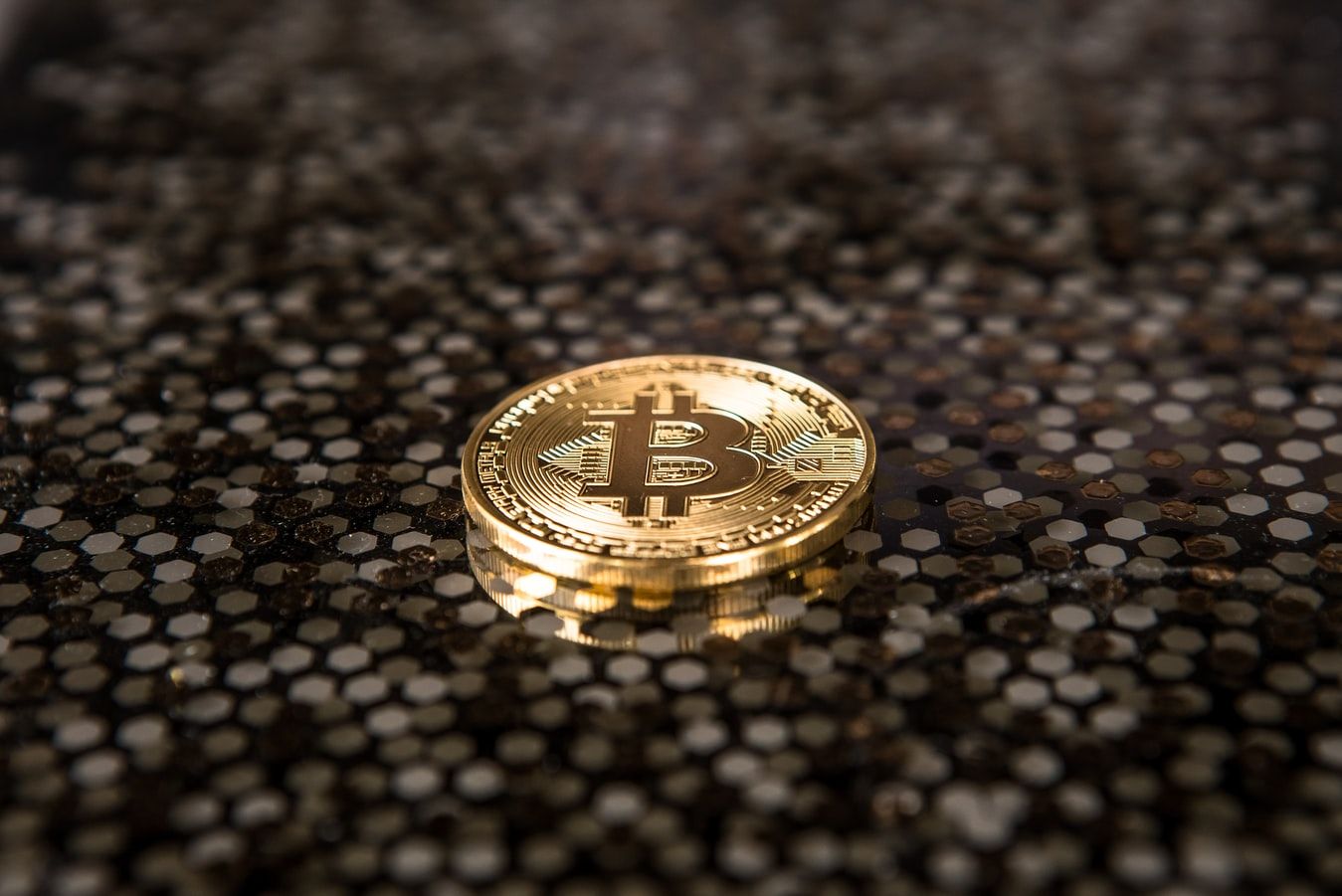 This is part 1 of the long-term analysis of the bitcoin price chart based on the technical perspective provided by the Elliott Wave Principle (EWP). This article is an introduction to EWP while part 2 will apply the principle for price and date targets.

EWP was proposed by Ralph N. Elliott in his 1938 book "The Wave Principle". The proposal is counter-intuitive, at first, because it argues that markets are not driven by fundamentals or news, but instead by "social mood" - the collective psychology of all market participants.

Elliott discovered that human psychology tends to express by ratio, and his discovery popularized the use of Fibonacci ratio analysis in market charts. Few analysts are aware, today, that pattern analysis concepts such as the "triangle", "wedge", trend "channel" and Fibonacci analysis were first discussed by Elliott in the 1930s. He applied these techniques as a means of determining trend development, much like they are used today. Of course, the core concept of his work, social mood, remains largely unrecognized, probably because it is nebulous and complex. But it can be understood with some simple explanations.

The role of social mood in market fluctuations

During market rallies social mood is positive and the collective optimism (an attitude) causes widespread buying (a behavior). When the social mood turns negative the resultant attitude is pessimism and the associated behavior is a predisposition toward selling and market shorting. The engine of markets is this subconscious collective psychology. Hence, good news and exemplary fundamentals fail to turn trend during a bear market. And we observe how, during a market rally, bad news and poor fundamentals do little to dent the exuberant uptrend - sometimes even emboldening the bullish sentiment and causing increased buying behavior, e.g. "burn rate" during the Dotcom bubble.

Other social and cultural factors are also driven by social mood. For example, during the roaring bull market of the 1920s, the comic book character Superman made his first appearance: the archetypal hero, a simple good guy who is impervious to mortal harm. Yet, during the bear market of the 1930s Superman comic book sales declined, and a new character became popular: Batman - a creature of the night, grappling with inner conflict and suffering, dressed in a dark cape and hiding his identity. Two insightful expressions of social mood. See https://socionomics.net for studies of social mood and cultural trends.

Now, it must be mentioned at this point, that EWP and the concept of social mood apply most visibly in the stock market. When applied to commodity price charts, such as gold or coffee or bitcoin, we have to consider the role of these commodities as highly speculative assets (as opposed to long-term stock investments). Unlike stocks, that advance on hope and decline on pessimism, commodities tend to be "safe haven" or "store of value" assets.

They advance during the periods of economic uncertainty when stock markets decline. It is the degree of fear and economic uncertainty that propels a store of value assets higher. Similarly, commodities such as coffee are subject to aggressive and opportunistic speculation based on supply and demand. Whereas stocks tend to receive inflows based on measured rational considerations, commodities are prone to emotional impulsivity rooted in fear and/or greed. The Wave Principle, being focused on psychology and emotion, proposes that the markets with the most emotionality should adhere best to the Wave Principle.

A contradiction to human psychology

Before looking at the idealized EWP chart, let's consider a popular analysis concept being applied to the bitcoin price chart, namely, Log Regression: 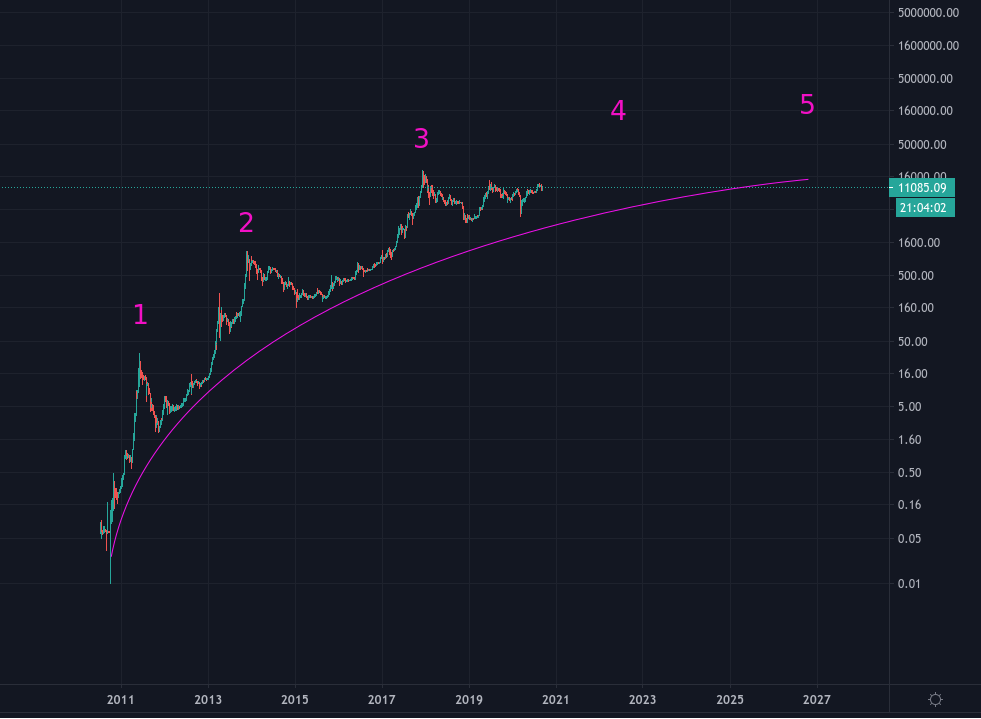 This chart's predictive value seems to be self-evident. A log curve fits neatly to the price chart and a series of consecutive "cycles" seem to project into the future as price tends toward $1mil.

However, this adheres neither to the observed nature of speculative price charts nor to human psychology. The log regression chart above contains only one "degree" of complexity - the same pattern ("cycle") iterating over and over. What we observe in the cosmos and in human endeavors, is that there are always multiple degrees of complexity unfolding simultaneously - often called "fractals" - of cycles within larger cycles. EWP has identified, in 10s of thousands of price charts, that there are many "degrees of trend" unfolding in a price chart as collective human psychology speculates price up and down in different timeframes and with the subconscious urge to fulfill the "Golden Mean".

Here is the idealized Wave pattern showing 3 degrees of the trend:

Advance unfolds in 5 waves. Correction unfolds in 3. This is seen in the first wave on the left where five waves, labeled 12345, are followed by a correction, labeled ABC. Notice that each of these sets of advances and corrections is labeled (1)(2)(3)(4)(5) - the second (and larger) degree of trend. Once five waves complete (top of the chart) we can label that advance as yet another larger degree [1], which will be followed by a correction of the same degree [2] at the bottom right of the chart. These are the cycles within cycles - always fractal at every degree, building into ever-larger degrees of advance with associated large degree corrections.

According to EWP, we never observe wave labels such as 7, 8, 9, etc. Once five waves have printed there must first be a correction at the same degree before the next set of 5 waves can begin. Hence, the log regression proposal is over-simplistic because it fails to incorporate the varying degrees unfolding simultaneously in a price chart.

So, how does EWP apply to the bitcoin price chart? Readers are advised to read the following objectively because it may be upsetting. 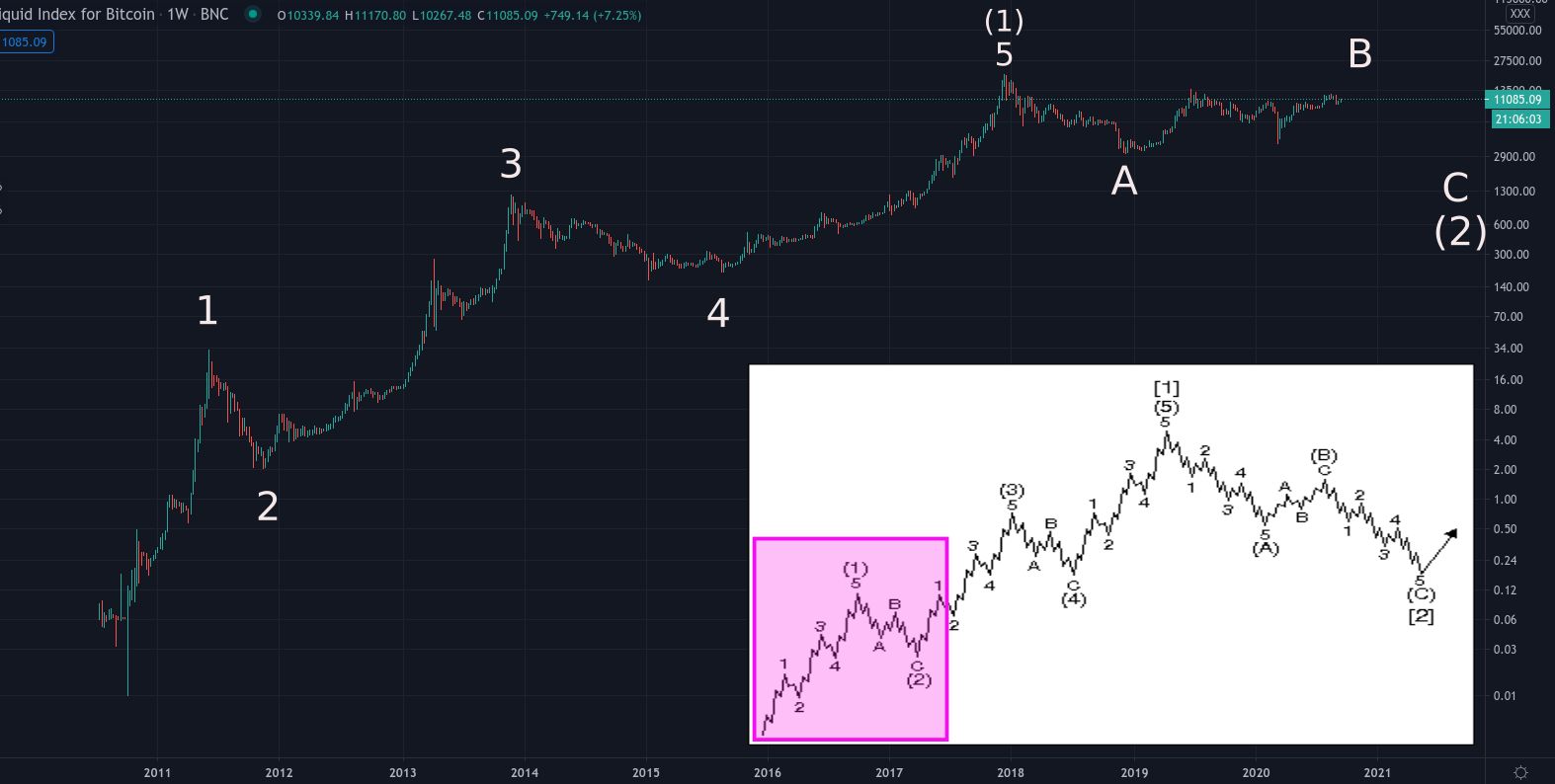 Five clear waves from $0.04 in 2010 up to ~$20k in 2017. To contextualize, see the magenta area highlighted in the inset EWP diagram. With five waves completed (and labeled (1) at the larger degree) we would now expect a correction - at the same degree - wave (2) to complete in three sub-waves (smaller degree ABC).

It is precisely at this juncture where EWP must assert itself in the chart. If it is a principle (and not a theory) and if it indeed applies to the bitcoin price chart, then we should now see all indicators turn bullish before failing spectacularly at the moment when the majority of participants hold maximum long positions. As has happened in every market in history, the second half of the bear market should be devastating as wave C of [2] destroys all hope and erases billions of dollars from BTC market capitalization.

What is the reason for the decline?

What may cause such a return to decline? We cannot know the associated events but EWP proposes that it will simply be a return of negative social mood. It will not be a change in fundamentals nor will it be a news event. Instead, we should see markets decline first, and then, after the fact, the media and commentators will blame the decline on subsequent events.

Part 2 will apply the Fibonacci ratio analysis to the BTCUSD chart in an effort to determine the depth and duration of its current bear market.

Chairman Zen has been trading traditional markets for over 10 years and started mining and trading cryptocurrency in 2013. He has contributed to Bitcoin development and peer review. While coding his trading method into an automated strategy he discovered MachinaTrader and chose this platform for it resource availability and efficient LEAN engine.