What Comes After SaaS? 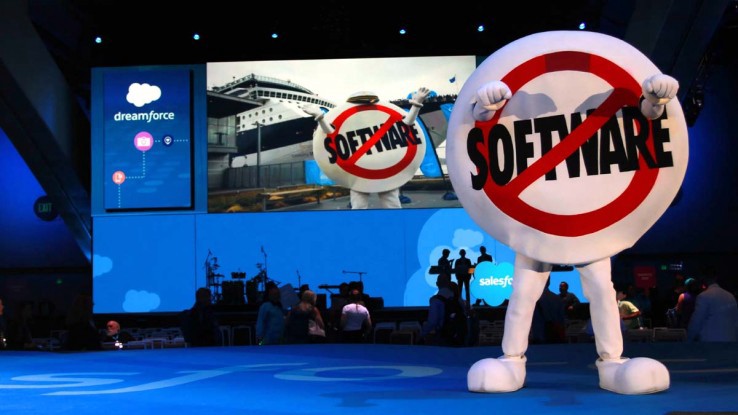 It was a crisp San Francisco morning. Louis [name changed] was feeling confident, cable car track lines whirring in the background, as he stepped into his local cafe to grab his morning coffee. Strolling down the hill to his software-as-a-service company, the bright sun matches his prospects. The company, built from a three month coding binge in Louis’ tiny south bay apartment, was becoming a real business — in sight of the mythical “unkillable” stage of $10M a year in annually recurring revenue.

Later that week (February 2016), SaaS and technology stocks plunged by more than 30%. Some companies — such as data visualization platform Tableau, saw their values cut in half. This culminated in the mighty Linkedin acquiescing to Microsoft. The next Monday had a cold chill in the air — grimacing, Louis zipped his jacket up against the cold, rushing to his office, his quiet morning routine looking like an oddly distant memory. Along with a day of fog, this chill ushered in Cloud 3.0.

SaaS is dying. Here’s why.

The early innings of cloud were a relatively friendly place for entrepreneurs — following in the wake of the Goliath Salesforce, all scrappy folks had to do was attack an old, underserved market. Or maybe even just build a product for the little companies who had previously been ignored.

The markets reacted very favorably to this new “stickier” revenue — and valuations for high-growth companies were incredibly favorable. The experience was better, faster to set up, and easier to manage than ever before. Products could quickly evolve, improve and delight their customers.

But as Gil Dibner notes — the SaaS revolution’s success may lead to it’s own downfall:

[T]he easy availability and mass adoption of cloud-based (SaaS) technology makes advanced software systems so much easier/cheaper/faster to build that “value” is rapidly bleeding out of the software stack. Yes, software is eating the world, but software’s very ubiquity is starting to threaten the ability to extract value from software. In other words, the ability to write and deploy code is no longer a core value driver.

Jerry Chen of Greylock (as well as Dibner) notes that the traditional moats enterprise technology companies have enjoyed are fading away fast:

In an era of cloud and open source, deep technology attacking hard problems is becoming a shallower moat. The use of open source is making it harder to monetize technology advances while the use of cloud to deliver technology is moving defensibility to different parts of the product. Companies that focus too much on technology without putting it in context of a customer problem will be caught between a rock and a hard place — or as I like to say, “between open source and a cloud place.”

It wasn’t apparent to Louis — or any of the aspiring new entrepreneurs — that even if you found a moat, this new way of doing business had two severe problems: Stacking and Switching costs.

Software empires of old — Oracle, SAP, and others — had a very easy path to accelerate their own growth: turn-key M&A. Buy growing software firms, cut research and development budgets and attach the acquired product to their internal sales force for significant new distribution. Nearly overnight, a $10M a year company could freeze future development, cut its most expensive costs, and become a $40, $50 — even $100M a year business. All this new value realized — just by plugging into the acquirer’s distribution paths.

But now in a SaaS world — software is continually changing and growing, shepherded by the product and engineering teams. The monthly contract value is often far less than the customer acquisition costs (mostly sales and integration). Creating and capturing real value requires up-front investment, and only pays out for happy, long-standing customers.

Thus, for a SaaS acquirer, the team either has to be small enough (and the market large enough) to warrant significant investment, or else have sufficient scale to make a real contribution to the bottom line. Everything else in between is too expensive and too hard to roll up to scale.

SaaS companies enjoy relative ease of on-boarding new customers — no on-prem data to move, easy integration hooks, etc. — but so do their competitors. To make matters worse, there’s even a whole class of SaaS companies built to make switching easier. They emerged from trying to solve their own challenge — attempting to enter a SaaS business and finding a moat:

Peter was annoyed. An energetic young fellow — he faced a pretty serious problem: people weren’t even willing to try his company’s analytics product. Even though it was (in 2012) a very immature market — and the current offerings lacked a lot of what customers wanted. Why? It was simply too much time and engineering cost — to migrate from the nascent “incumbent” analytics platforms. So Peter and his team build middleware to make it easy to switch between SaaS providers (maybe then people might try his system). Then, developers around the world found it, and Segment helped usher in a new level of connectivity. (Since this was written, Peter Reinhardt told this story himself to Startup School.)

Not large enough to stack, not worthless (or weak enough) to die

SaaS’s own success is it’s own enemy — the cost and the time to build novel things has fallen significantly. Thus as a software company hits real scale, it’s left in a no man’s land — not large enough to stack, not worthless (or weak enough) to die — but too much competition — from the low end, the high end, from customers cobbling together a series of other tools — to prevent any real growth.

When Google releases a full app building tool — that a clever person could use to replace nearly any different app needs their company might have — we know change is in the air.

The next chapter of Cloud software will lead to an explosion of new vendors and offerings. But they won’t quite look the same as before — expect lots of point solutions (run by small teams or even individuals) and software as a delivery for more elaborate (e.g. human-in-the-loop) service.

This new way of doing business is still developing rapidly. But here’s a spotting guide to identify this new breed of company in the wild:

One or More Core Value

Interestingly, Salesforce — who brought us “The Cloud” — may even be the first major window to what next generation companies look like. After all, one could argue the value to a SMB choosing Salesforce (instead of the many ways to manage sales contacts) has become:

We could imagine even faster innovation if only there were a way to establish trust with many remote vendors and workers, each offering the very best point solution in the world. 10 Million “companies” powered by the very best person in the world at their solution. Sounds a little bit like Ethereum and the token-based economy… (More on this another day.)

Some of Louis’ customers started to erode. They love his service, but are wondering if he could reduce the price, since some of them may have trouble raising their next round of funding at the current pace. Besides, the costs of everything — compute, storage, etc. — are all plummeting. Maybe the ailing companies should consider rolling their own version of Louis’ software to cut the monthly bills?

This is the beginning of a post-SaaS world playing out — fewer and fewer companies will break through. Few companies can grow fast enough. The rest…a prolonged stasis, the day to day management of what boils down to a bond — a known flow of future cash with some risk attached to it — just waiting for a buyer…

What value do you uniquely — best in the world — provide?

So to CEOs — what value do you uniquely — best in the world — provide? Do you have the market fit (and the moat) to make the jump in the next stages? What stops the next generation from copying your product and selling it for 1/10th the cost? You and Louis lie awake at night thinking these same things.

Noah is a Silicon Valley Entrepreneur (and former SaaS company CEO). You can find him on Twitter and LinkedIn.