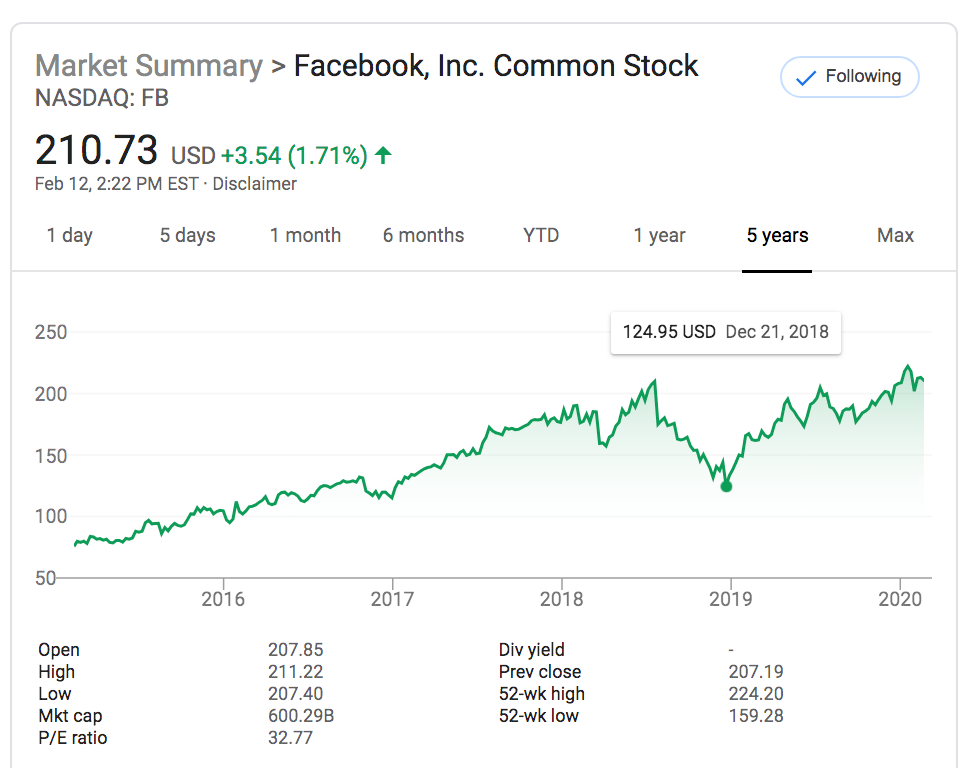 News of Facebook’s privacy issues broke at the beginning of the second quarter in 2018. However, the effects of their privacy failures started being felt mid-year when their prices fell by almost 20%. It has taken almost two years for Facebook’s stock price to return to its previous high in 2018.

Earlier in 2018, privacy concerns over Facebook’s platform had been raised, prompting Mark Zuckerberg to state their plans concerning the privacy of user data.

The company, at the time, had been found guilty by German and Belgian courts for breaching the privacy laws of the jurisdictions. Facebook also admitted that it had used the 2 Factor Authentication system to obtain user numbers for advertising.

These were the early signs that something potentially big could blow up if the social media giant doesn’t fix its problems. News of Cambridge Analytica then broke out at the end of Q1 in 2018, which alarmed the world.

However, to tech enthusiasts, the news wasn’t as shocking. Data breaches had occurred numerous times in the past to big companies, and one could even argue that this was expected. The way user data was utilized was what made the Cambridge Analytica exposé alarming.

Stock prices would be shaken following the release of the news. However, the growth trend returned for a short period before the 20% drop in value that was experienced mid-year.

By March 2020, it will have been two years since the news on Cambridge Analytica broke out. Its effects are still being felt globally as companies are changing their privacy statements to meet recently implemented privacy laws.

Facebook’s business structure is based on advertising on its platform. It has a global reach of over 2 billion users, with 1.6 billion active daily users. The platform contains almost all demographics targeted by advertisers worldwide. Further, the digitization of the world has made social platforms ideal for advertising, which puts Facebook in a very lucrative position.

The advertisement model on Facebook depends on user data. The social media giant carries out targeted advertising based on their users’ social activity, which usually represents their preferred lifestyles.

With the business model, a problem arises for the company; where to draw the line when collecting user data. User data collection must be done in a way that does not infringe on any data privacy laws. Moreover, it must be done after the user has consented to their data collection.

Privacy concerns have affected the business model and, thus, the revenue of Facebook. Despite the growth in numbers, more people are cautious about how they use the platform.

After Cambridge Analytica, more people started taking data privacy seriously. People have become aware of the dangers of unethical data collection practices and are taking up measures on how to prevent it.

Users are also facing the challenge of balancing their safety with their use of social media. Most social media users would want to continue using their social media as they have in previous years without the dangers of having their data exposed or leveraged against them.

What are Existing Solutions to Facebook’s Privacy and Data Issues?

Most of the Big Tech platforms are founded on centralized systems that are inherently weak and easily targeted by hackers. Centralized networks are lucrative to hackers due to the rewards they possess after being hacked. All the data is usually stored in a central server. Once hacked, hackers can have a field day with user data.

However, the most dangerous entities may arguably be third-party applications given access to these social media platforms. They can easily harvest user data unbeknownst to users and, to some extent even the social media company as was the case with Facebook.

Developments in technology have resulted in existing solutions that can preserve both user data, ensure the ethical collection of user data, and keep both the data market and users happy. The solutions lie in blockchain technology.

Already, there are several examples of technology that can be used to make social media experience fun and safe.

It must be noted that blockchain is not entirely immune to hacking. The technology, however, discourages hackers due to its method of data storage. Data is distributed among different blocks which makes it harder and unrewarding for hackers as they must gain access to many blocks before they can have any substantial data.

Further, blockchain also gives users the power to decide who can have their data and to what extent their data can be used. The use of blockchain technology could easily help avert crises that have been seen before and the new ones that may arrive in the future.

The more users become aware of their data; the more Facebook is going to realize losses.

With the ongoing evolution in blockchain technology, strong consideration must be given to challenge existing data and privacy status quo’s | IBM

It may be time for the world to embrace decentralization and adopt blockchain technology. This can be done gradually to ease transition from centralized networks to the safer, more secure decentralized ecosystems.

Various models of adoption can be taken up with numerous blockchain companies offering blockchain adoption options. It may take some time for companies to migrate to decentralized networks fully; however, for users, they can easily migrate to already existing platforms in the blockchain ecosystem.

On data collection, platforms such as Instars are showing that it can be done without infringing privacy laws. The platform collects data from consenting users. Data is collected voluntarily, and there is also compensation for the data collected, another added advantage of blockchain technology.

As aforementioned, it is set up to ensure that data collection in its platform is done ethically and only through permission by its users. The company also appropriately compensates its users for the data they submit on the platform. Further, Instars is always improving its services to meet the privacy demands of its ever-evolving user-base.

Investment options are also provided by decentralized platforms. Tokens native to these platforms can appreciate over time. Users of the platforms owning these tokens can then trade them for other tokens or money.

Blockchain is on the process of making itself as enterprise-ready as possible. Various offers are available and 2020 may be the best year for enterprise adoption of the technology.

On data collection, there are existing blockchain platforms that offer curated data collection based on the demands of their clients. Data is collected ethically and accurately as it is provided directly from the requested target demographic by the client.

Companies are assured that their advertisements get to the intended demographic. They are also assured that the data they obtain is as accurate as recorded from the primary source.

With blockchain, any revenue loss loopholes are also sealed, as all records made are immutable.

Facebook’s affected growth trend, and profit is a warning to the big tech companies. Most people are aware of their privacy rights and are becoming more cautious while using technology.

It is only a matter of time before the decentralization migration begins, and blockchain companies start raking in higher profits. The next privacy scandal could spell doom for even the biggest players.