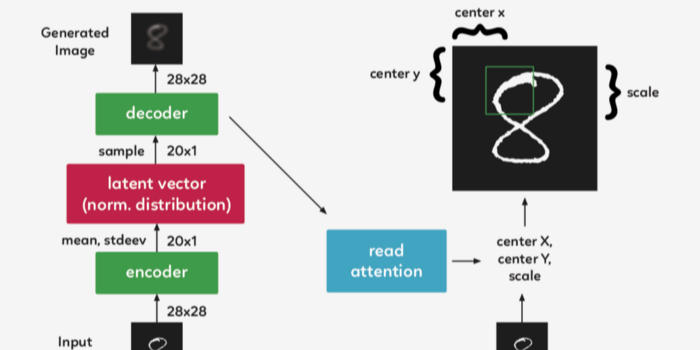 The purpose of this post is to implement and understand Google Deepmind’s paper DRAW: A Recurrent Neural Network For Image Generation. The code is based on the work of Eric Jang, who in his original code was able to achieve the implementation in only 158 lines of Python code.

Let’s begin by explaining what does DRAW stands for…

Deep Recurrent Attentive Writer (DRAW) is a neural network architecture for image generation. DRAW networks combine a novel spatial attention mechanism that mimics the foveation of the human eye, with a sequential variational auto-encoding framework that allows for the iterative construction of complex images.

The system substantially improves on the state of the art for generative models on MNIST, and, when trained on the Street View House Numbers dataset, it generates images that cannot be distinguished from real data with the naked eye.

The core of the DRAW architecture is a pair of recurrent neural networks: an encoder network that compresses the real images presented during training, and a decoder that reconstitutes images after receiving codes. The combined system is trained end-to-end with stochastic gradient descent, where the loss function is a variational upper bound on the log-likelihood of the data.

3 Key Differences Between DRAW and Auto-Encoders

Both, the encoder and decoder are recurrent networks in DRAW.Decoder’s output are added successively to the distribution in order to generate the data, instead of generating this the distribution in single steps.A dynamically updated attention mechanism is used to restrict both the input region observed by the encoder, and the output region modified by the decoder. In simple terms, the network decides at each time-step “where to read” and “where to write” as well as “what to write”. 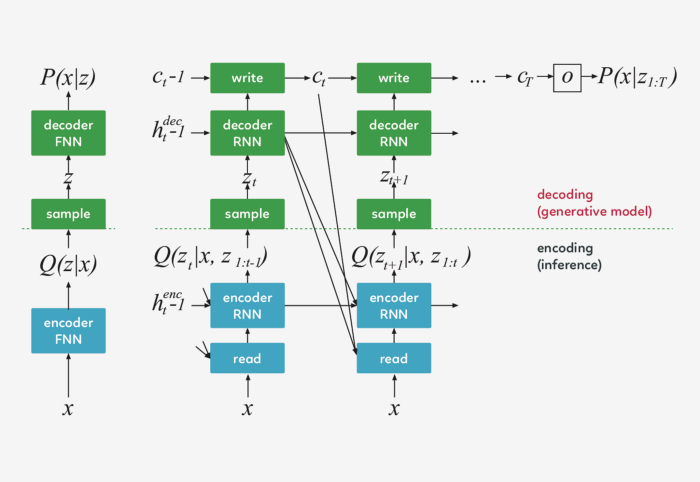 Left: Conventional Variational Auto-Encoder.
During generation, a sample z is drawn from a prior P(z) and passed through the feedforward decoder network to compute the probability of the input P(x|z) given the sample.

During inference the input x is passed to the encoder network, producing an approximate posterior Q(z|x) over latent variables. During training, z is sampled from Q(z|x) and then used to compute the total description length KL ( Q (Z|x)∣∣ P(Z)−log(P(x|z)), which is minimized with stochastic gradient descent.

Right: DRAW Network.
At each time-step a sample z_t from the prior P(z_t) is passed to the recurrent decoder network, which then modifies part of the canvas matrix. The final canvas matrix cT is used to compute P(x|z_1:T).

During inference the input is read at every time-step and the result is passed to the encoder RNN. The RNNs at the previous time-step specify where to read. The output of the encoder RNN is used to compute the approximate posterior over the latent variables at that time-step.

The final canvas matrix cT is used to parametrize a model D(X | cT) of the input data. If the input is binary, the natural choice for D is a Bernoulli distribution with means given by σ(cT). The reconstruction loss Lx is defined as the negative log probability of x under D:

for a sequence of latent distributions

which depend in turn on the input x. If the latent distribution is a diagonal Gaussian with μt, σt where:

a simple choice for P(Z_t) is a standard Gaussian with mean zero and standard deviation one, in which case the equation becomes:

The total loss L for the network is the expectation of the sum of the reconstruction and latent losses:

Which we optimize using a single sample of z for each stochastic gradient descent step.

As Eric Jang mentions on his post, it’s easier to ask our neural network to merely “improve the image” rather than “finish the image in one shot”. Human artists work by iterating on their canvas, and infer from their drawing what to fix and what to paint next.

Improving an image or progressive refinement is simply breaking up our joint distribution P(C) over and over again, resulting in a chain of latent variables C1,C2,…CT−1 to a new observed variable distribution P(CT).

The trick is to sample from the iterative refinement distribution P(Ct|Ct−1)several times rather than straight-up sampling from P(C).

In the DRAW model, P(Ct|Ct−1) is the same distribution for all t, so we can compactly represent this as the following recurrence relation (if not, then we have a Markov Chain instead of a recurrent network) 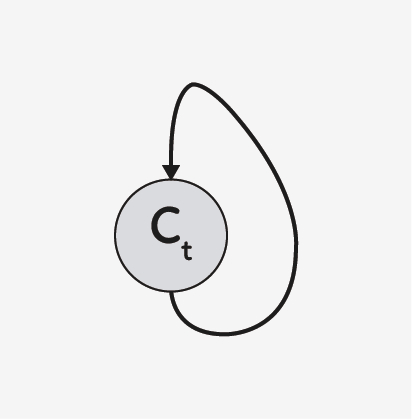 Imagine you are trying to encode an image of the number 8. Every handwritten number is drawn differently, while some portions may be thicker others can be longer. Without attention, the encoder would be forced to try and capture all these small variations at the same time.

But…what about if the encoder could choose a small crop of the image on every frame and examine each portion of the number one at a time? That would make the work more easy, right?

The same logic applies for generating the number. The attention unit will determine where to draw the next portion of the number 8 -or any other-, while the latent vector passed will determine if the decoder generates a thicker area or a thinner area.

Basically, if we think of the latent code in a VAE (variational auto-encoder)as a vector that represents the entire image, the latent codes in DRAW can be thought of as vectors that represent a pen stroke. Eventually, a sequence of these vectors creates a recreation of the original image.

Ok, But how does it really work?

In a recurrent VAE model, the encoder takes in the entire input image at every single timestep. In DRAW we need to focus in the attention gate between the two of them, so the encoder only receives the portion of our image that the network deems is important at that timestep. That first attention gate is called the “read” attention.

Choosing the important portionCropping the image and forget about other parts

Choosing the important portion of an image

In order to determine which part of the image to focus on, we need some sort of observation to make a decision based on. In DRAW, we use the previous timestep’s decoder hidden state. Using a simple fully-connected layer, we can map the hidden state to three parameters that represent our square crop: center x, center y, and the scale. 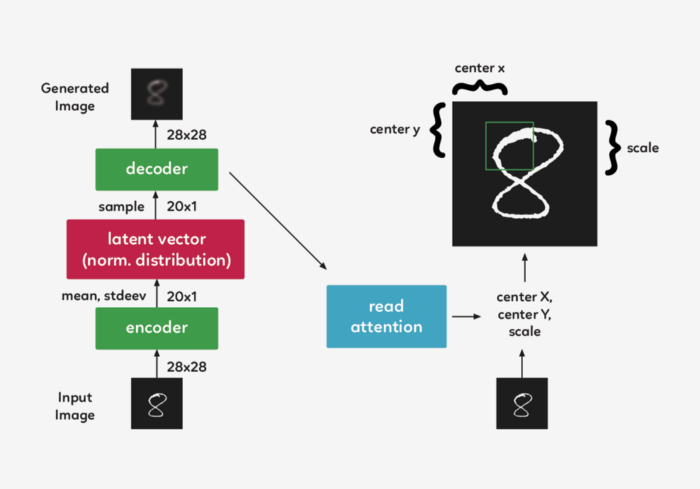 Now, instead of encoding the entire image, we crop it so only a small part of the image is encoded. This code is then passed through the system, and decoded back into a small patch.

We now arrive to the second part of our attention gate, the “write”attention, which have the same setup as the “read” section, except that the “write” attention gate uses the current decoder instead of the previous timestep’s decoder. 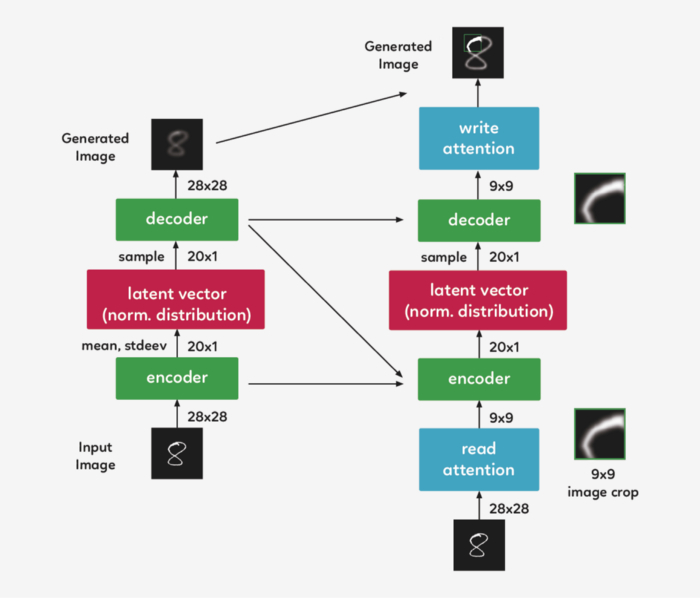 Wait…is that really done in practice?

While describing the attention mechanism as a crop makes sense intuitively, in practice, a different method is used. The model structure described above is still accurate, but a matrix of gaussian filters instead of a crop is used.

In DRAW, we take an array of gaussian filters, each with their centers spaced apart evenly.

Show me the money…or the code instead

Eric provide us with some great functions that will help us build our “read” and “write” attention gates as well as a function to filter the initial state that we will use below, but first, we will need add new functions that will allow us to create a dense layer as well as merge the images and save them into our local machine for our updated code.

Let’s now put the code all together for the sake of completion.

You can see the full notebook on my github page.

About the author: Samuel Noriega is a Master of Data Science graduate from the University of Barcelona. He is the head of Data Science at Shugert Analytics and city lead at Saturdays.ai. Recently co-founded Roomies.es

Related Stories
Subject Matter
Win $2000 by building a web app on Velo by Wix by @Wix
#promoted
Why Kubernetes Is The Best Technology For Running A Cloud-Native Database by @jscarp
#kubernetes
Machine Learning Frameworks for PHP Developers by @atulhjindall
#machine-learning
Why Would Anything Ever Go Right? by @ted-wade
#economics
Features Selection by Using Xverse Package by @davisdavid
#python
Unique NFT Use Cases: What’s Beyond NFT Art? by @michielmulders
#crypto