Ever found yourself daydreaming of another career? Whether it’s to find fulfilling work, earn a higher salary, solve bigger challenges or all of the above, more people than you might expect turn those dreams into reality. In fact, in a recent survey by Indeed.com, 49% of employees told us they’d made a total career change. And the tech industry is no exception.

People are looking to break into tech and they’re succeeding: 41% of surveyed tech workers said they’ve made a complete career switch. It’s a great time to make the move with more employers willing to take on candidates with less traditional backgrounds and high-paying, fast-growing jobs not necessarily requiring a highly technical background (e.g. agile coach).

If you’re considering jumping into tech or find yourself in the middle of a transition, find some inspiration below as we dig into who has switched careers in the tech industry, why they did it and what it takes to get there.

Why People Switch Careers Into Tech

People gave us a lot of reasons for switching into tech. That might have to do with just how long they have to think about a new career: on average, people who moved into tech considered it for 12 months. That’s two months longer than other industries. More people who switched into tech also talked through their plans with friends and family: 81% had conversations about their decisions compared to only 71% in other industries.

So why do people shift gears? 89% of our respondents cited money, which was the number one reason, but they offered us plenty of others: 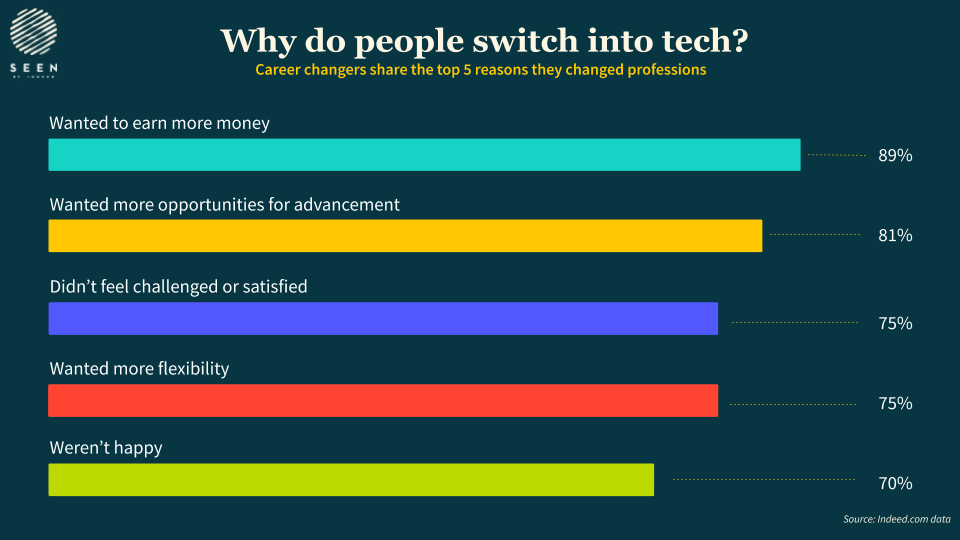 Further down the list of reasons others offered were looking for a less stressful job or feeling their job was going to be obsolete. This reinforces that salary is important, but it’s not a single dimension that attracts someone to a role. In surveys we’ve run to tech talent on Seen, we’ve also found the perks they actually care about can differ pretty dramatically.

One thing to point out is that some people in tech reported they were looking to change careers out of tech in the next two years for a lot of the same reasons people switched into tech: unhappiness, lack of advancement, stress and money. If you’re looking to switch, take the time to think about your motivations since tech isn’t right for everyone.

What—and How Much—it Takes to Break Into Tech

Only 36% of tech switchers reported enrolling in specific educational or training programs, a nearly identical portion as other industries (37%). As Indeed pointed out, this could be because of career changers moving into roles with transferable skills. Within tech, this could mean graphic designers moving into a UX design role or program managers moving into product management. Others are also likely taking advantage of company tuition reimbursement or in-house education, or going the entirely self-taught route.

And of those seeking formal education? While bootcamps are growing in popularity, colleges and universities tie with certifications (both at 46%) as the main ways job seekers educate themselves in tech. 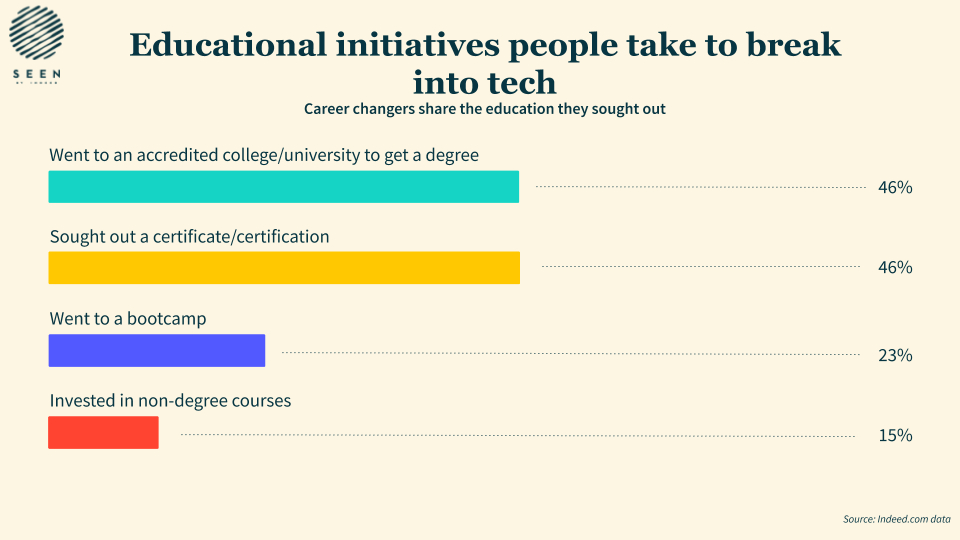 Tech changers that invest financially in their education have to invest far more than other industries: an average of $38,507 compared to $15,715. The good news is that 81% of those in tech recouped their investment by the time of our survey (compared to 71% in other industries), with certain IT certifications in particular paying off in higher salaries.

That said, you don’t have to invest financially. 56% of tech career changers didn’t have to invest any money to make the switch. HackerRank reported earlier this year that nearly a third of coders are self taught. Unsurprising with the amount of online resources to teach themselves and practice completely for free. Regardless of whether or not they invested, 83% of career changers into tech reported being impacted financially by their decision with only 39% saying it meant they took a pay cut initially (compared to 61% in other industries).

Beyond the financial and time investment, it might involve relocation, too: nearly half of respondents said that breaking into tech involved moving to another state (or even country). That number is higher than other industries, which could be another reason those in tech reported having more conversations around their decision.

The most important question we asked

“Are you happier since making your career change?” 92% of people that switched into tech told us they were. But knowing the (multiple) payoffs doesn’t make it any easier to break in.

The first step to breaking into tech is figuring out what “tech” means to you. Tech might conjure up an image of a developer working in a code terminal, but the industry is also driven by those who design the visuals of an app, manage the security of a network, test hardware, guide product strategy and a slew of other career paths.

Career coach tip: Don’t know where to start? Ask people within the tech industry in a few roles you’re curious about for an informational interview. It’s easier than you probably think.

While it may be called the “tech industry,” nearly every single industry is being disrupted or enhanced by tech. And as this data shows, breaking into tech is by no means impossible. It won’t happen overnight, but by putting in time, thought and energy, you can earn your spot in a (more) fulfilling tech career.