The world needs an alternative to Selenium - so we built one 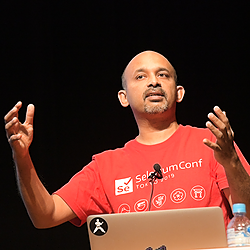 And by the way, I still don't understand what on earth a "Screenplay Pattern" is. So sue me.
8) Parallel and Distributed Testing is hard - and can be made simpler. You can't have a discussion on Selenium without the word "grid" coming up at some point. While doing "grid stuff" was really hard in the past - it has come a long way though, and there is Zalenium and 3rd party alternatives such as Selenoid / Aerokube that make things easier nowadays. Surprisingly, most testing frameworks fail at parallel testing, but Karate has the advantage that since it started out as a "headless" API testing framework, it had to get parallel testing right - from day one, and this is part of the core, not an add-on.
And we are experimenting with a way to do distributed parallel testing without needing to provision or install a "grid" equivalent, and which just works in your existing CI set-up - so please help us test this if you can !
9) Hybrid API and UI tests are hard - this is probably an unfair advantage that Karate has, because it started out as an API testing tool and which I strongly believe is the right architectural "sequence". I see many tool vendors and projects that started out as a UI automation solutions - but then had to retro-actively "bolt on" poor substitutes for API testing. More and more people are catching on to the fact that moving down the "testing pyramid" is a good thing.
So with Karate you can indeed achieve very effective approaches such as getting an Auth token via an API call and then dropping a cookie or two onto a blank page - which means that you can completely by-pass a time-consuming and potentially "flaky" sign-in "form" or UI. Karate has a serious advantage as a framework that can do both API and UI testing - within the same syntax, within the same test flow.
Karate happens to have API mocking (which can even serve HTML) and also performance-testing capabilities, and we are excited about how these can potentially complement - or be mixed into UI testing in the future.
By the way, we have contributors working on Appium support, which is a sign that Karate is flexible enough to handle mobile and even desktop application testing within the same core framework.
10) Executing JavaScript in the Browser is hard - in the Selenium world, you will find plenty of examples and references to the "JavaScriptExecutor" and the various equivalents in the different language bindings and "wrappers" - and this is another area we've tried our best to simplify in Karate. Most of the time, you just need to execute a snippet of JS against a given HTML DOM element. Karate recognizes this common need - and makes it dead simple.
So I'll stop here with these top 10 !
Karate is certainly a new entrant into the UI automation "wild west", but the community reception and adoption of the API testing capabilities has been extraordinary, and we are confident that the community will appreciate the things that we have tried to improve, and the things that we have tried to do differently.
Please try it out, let us know what works and what doesn't - and if you found the arguments above compelling, please support this project by spreading the word - even if you can't contribute code ! Thanks :)