The Ultimate Strategy to Preparing for the Coding Interview 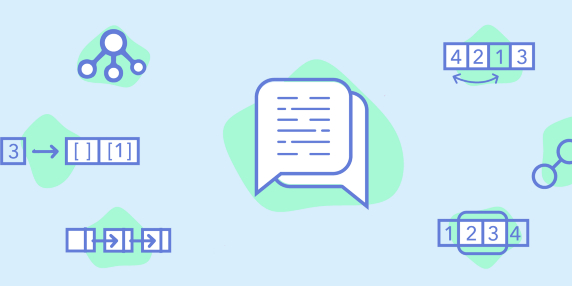 How to do faster preparation for coding interviews?

Coding interviews are getting harder every day. A few years back, brushing up on key data structures and going through 50–75 practice questions was more than enough prep for an interview. Today, everyone has access to massive sets of coding problems, and they’ve gotten more difficult as well. The overall interview process has gotten more competitive.

In this post, I like to share a strategy that I’ve been following to prepare for coding interviews. My software engineering career spans around 15 years, in which I have switched jobs five times. I’ve given around 30 interview loops containing 120+ interviews. I’ve some experience sitting on the other side of the table too. I’ve taken 200+ coding interviews and 100+ system design interviews.

I consider myself a reasonably smart engineer, but I have had my challenges solving coding problems on a whiteboard, especially in an interview setting where someone is evaluating me. To tackle this problem, I had been spending a reasonable time for preparation and practice. One thing I didn’t realize was that while doing my preparation, I was following a systematic approach.

I was able to go through 12–15 questions practicing two hours every day. This meant that I was able to solve 350+ questions within one month. Using this routine, I was able to crack my interviews for FAANGs (Facebook, Apple, Amazon, Netflix, Google).

How was I able to practice 12+ coding questions every day with a fulltime job? Well, I was not solving coding problems but practicing to ‘map’ problems to already known problems that I’ve solved before.

I used to read a problem, spend a few minutes to map it to a similar problem that I have seen before. If I can map it, I focus only on the different constraints this problem has compared to the parent problem.

If it is a new problem, then I try to solve it and also read around to find smart ways other people have used to device its algorithm. Over time, I developed a set of problem-patterns, that helped me quickly ‘map’ a problem to an already known pattern. Here are some examples of these patterns:

Following this pattern-based approach helped me save a lot of preparation time. As once you’re familiar with a pattern, you will be able to solve dozens of problems with it. In addition to that, this strategy made me confident to tackle unknown problems, as I’ve been practicing to map unknown problems to known problems.

In the remaining post, I will share all the patterns that I’ve collected over time and present sample problems for a few. For a detailed discussion of these patterns and their related problems with solutions take a look at Grokking the Coding Interview.

, , and indices and in each step we reduce our search space by moving or . Since no two consecutive numbers are same (as the array is monotonically increasing or decreasing), whenever we calculate the  index for Binary Search, we can compare the numbers pointed out by the index  and  to find if we are in the ascending or the descending part. So:

We can break when

. Due to the two points mentioned above, both  and  will be pointing at the maximum number of the Bitonic array.

Code: Here is the Java code to solve this problem:

Problem statement: Given an array of sorted numbers and a target sum, find a pair in the array whose sum is equal to the given target.

Write a function to return the indices of the two numbers (i.e., the pair) such that they add up to the given target.

Solution: Since the given array is sorted, a brute-force solution could be to iterate through the array, taking one number at a time and searching for the second number through Binary Search. The time complexity of this algorithm will be O(N*logN). Can we do better than this?

We can follow the Two Pointers approach. We will start with one pointer pointing to the beginning of the array and another pointing at the end. At every step, we will see if the numbers pointed by the two pointers add up to the target sum. If they do, we have found our pair. Otherwise, we will do one of two things:

Here is the visual representation of this algorithm for the example mentioned above: 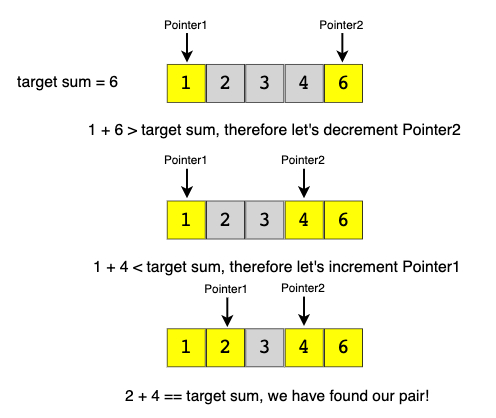 Problem statement: Given an array of points in a 2D plane, find ‘K’ closest points to the origin.

Solution: The Euclidean distance of a point

from the origin can be calculated through the following formula:

We can use a Max Heap to find ‘K’ points closest to the origin. We can start with pushing first ‘K’ points in the heap. While iterating through the remaining points, if a point (say ‘P’) is closer to the origin than the top point of the max-heap, we will remove that top point from the heap and add ‘P’ to always keep the closest points in the heap.

Problem Statement: Given a set with distinct elements, find all of its distinct subsets.

Solution: To generate all subsets of the given set, we can use the Breadth-First Search (BFS) approach. We can start with an empty set, iterate through all numbers one-by-one, and add them to existing sets to create new subsets.

Let’s take the above-mentioned example to go through each step of our algorithm:

Here is the visual representation of the above steps: 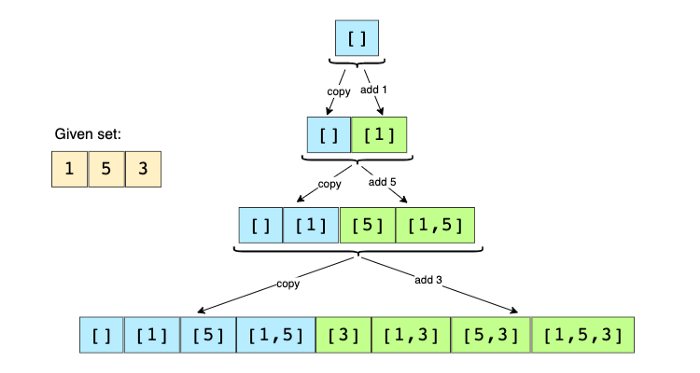 Problem Statement: Given a binary tree and a number ‘S,’ find if the tree has a path from root-to-leaf such that the sum of all the node values of that path equals ‘S.’

Solution: As we are trying to search for a root-to-leaf path, we can use the Depth First Search (DFS) technique to solve this problem.

To recursively traverse a binary tree in a DFS fashion, we can start from the root and at every step, make two recursive calls one for the left and one for the right child.

Here are the steps for our Binary Tree Path Sum problem:

Following these patterns helped me tremendously to save time for my coding interview prep. Take a look at Grokking the Coding Interview and Grokking Dynamic Programming Patterns for Coding Interviews to find more of such patterns and their sample problems.