The Feynman Learning Technique: How to Learn Anything Well 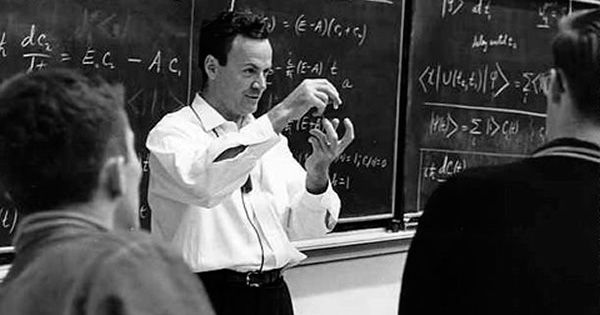 It is 1941 and you have a problem. While you haven’t yet gotten around to defining quantum electrodynamics, or even started your work helping design the atomic bomb, you are nearing the end of your second year of graduate school. This means you have an exam soon.

That’s OK though. You know what to do. After all, you have made it this far already. You just do what you always do — you pull out a notebook. And not just any notebook, but one especially well-prepared for the task at hand. Namely, a blank one.

A fitting title is needed for the first page. You think for a moment, smiling to yourself as you creatively run through all the options you could pick. But, alas, none of them seem right. You opt for the tried-and-true but never worn out choice. You write it down.

You are Richard P. Feynman, arguably the brightest young physics mind in the United States at the time, and you have just written “Notebook Of Things I Don’t Know About” on the title page.

Feynman realized early on that people can trick themselves into believing they understand something more deeply than they truly do. This self-delusion often comes from an earnest effort focused on learning the wrong thing — learning the name of something as opposed to that which it truly is.

The next Monday we were playing in a field, and a kid said to me, “What’s that bird? Do you know the name of that bird?” I said, “I haven’t the slightest idea.” He said, “Well, it is a brown‑throated thrush.” He said, “Your father doesn’t teach you anything.”

But my father had already taught me about the names of birds. Once we walked, and he said, “That is a brown-throated thrush. In German it is called the Pfleegel flügel. In Chinese it is called Keewontong. In Japanese a Towhatowharra”, and so on.

And when you know all the names of that bird in every language, you know nothing, know absolutely nothing, about the bird… So I had learned already that names don’t constitute knowledge…

You’ve got to be very careful not to confuse yourself.

Understanding this, Feynman was very careful to not delude himself into a superficial understanding of important topics. He developed a more holistic, multidisciplinary approach to learning that served him well throughout his career. While never specifically stated by Feynman as a set technique with steps, Feynman loved sharing with others enough that we can piece together his teachings, along with stories of his life, to better understand how he naturally approached learning anything new.

The combination of ideas, which many different authors outline slightly differently but are holistically the same, is known as The Feynman Learning Technique.

So how does this technique actually work?

Step 1: Whatever you are trying to learn, take a stab at learning it

The way that Feynman learned and internalized new ideas was to first attack them head on the old fashioned way — by reading and thinking through them. The key emphasis in that sentence is on the word thinking. Famously, Feynman would read the abstract of a scientific paper, and before reading any further, attempt to solve the stated problem. Only then would he read through the rest of the paper. He was focused on mentally wrestling with an idea as opposed to letting someone else walk him to the final answer.

So the first step in the process is to pick something that you need (or better yet, desire) to learn and spend time with the new idea until you have internalized it to the best of your ability.

Now, you might aptly question, “What is this HOGwash? Step 1 of this supposed wonderfully useful learning technique is to learn something? I’m out.”

Stop your SWINEing and don’t worry — there is more to it than that. Which brings us to the second step.

Step 2: Write everything down, in as simple a way as possible, as if you were preparing a lecture for an inquisitive child

This is where the notebook comes in. Open it. Close everything else.

From memory, write down everything you can about what you are trying to learn as if you were preparing to teach it to someone else. Preferably, pretend you are planning to teach the topic to a child — the more you can simplify your language and the ideas, the more likely you are to find areas where you are hiding behind the name of something as opposed to true understanding.

You have to learn definitions. But for the very first lesson, is that not possibly destructive?

At this point, you will probably notice that there are things that you are missing or don’t remember as well as you thought you did. Write those items down — make a list of all the things you don’t know.

Now open everything back up and search out the answers to those items. Get to a point where you feel like you have conveyed what is required for your theoretical student to deeply understand the topic.

Step 3: Ask questions as if you were a child to identify gaps in your understanding

Now you need to channel your inner child. Feynman’s neverending child-like curiosity is often viewed as the core, natural foundation that differentiated Feynman from other equally intelligent individuals. As children are wont to do, start questioning every line you have written down.

If you are seeking Feynman-level understanding, it is not enough to merely know the math formula as that is akin to just knowing the name of something. You need to understand the information qualitatively and quantitatively supporting the formula — only then should you feel confident in your understanding.

As you write out these new questions, you’ll find you can answer some of these. Maybe even most of these. However, at some point, you will run out of answers for the incessant child — write all these things down as items you “don’t know about.” Then go find the answers to these new topics.

By doing this, you are strengthening the foundation upon which your primary new learnings are ingrained in your head.

But the problem, you see, when you ask why something happens, how does a person answer why something happens? For example, Aunt Minnie is in the hospital. Why? Because she went out, slipped on the ice, and broke her hip. That satisfies people. It satisfies, but it wouldn’t satisfy someone who came from another planet and who knew nothing about why when you break your hip do you go to the hospital…

And you begin to get a very interesting understanding of the world and all its complications. If you try to follow anything up, you go deeper and deeper in various directions. For example, if you go, “Why did she slip on the ice?” Well, ice is slippery. Everybody knows that, no problem. But you ask why is ice slippery? That’s kinda curious. Ice is extremely slippery. It’s very interesting. You say, how does it work? You could either say, “I’m satisfied that you’ve answered me. Ice is slippery; that explains it,” or you could go on and say, “Why is ice slippery?” and then you’re involved with something, because there aren’t many things as slippery as ice…

A solid that’s so slippery? Because it is, in the case of ice, when you stand on it (they say) momentarily the pressure melts the ice a little bit so you get a sort of instantaneous water surface on which you’re slipping. Why on ice and not on other things? Because water expands when it freezes, so the pressure tries to undo the expansion and melts it. It’s capable of melting, but other substances get cracked when they’re freezing, and when you push them they’re satisfied to be solid.

Why does water expand when it freezes and other substances don’t? I’m not answering your question, but I’m telling you how difficult the why question is. You have to know what it is that you’re permitted to understand and allow to be understood and known, and what it is you’re not. You’ll notice, in this example, that the more I ask why, the deeper a thing is, the more interesting it gets. We could even go further and say, “Why did she fall down when she slipped?” It has to do with gravity, involves all the planets and everything else. Nevermind! It goes on and on.

Step 4: Repeat step 3 until the questioning adds no incremental value

Now you iterate with yourself. After you have written down the “things I don’t know about,” open the books again — and maybe you have to find new books — and review those items. Get to the point where you can, for each new item you don’t currently know, incorporate these new items into the same lecture for the theoretical student. Continue to do this from memory with the new books closed.

Once that is done, you need to again bring out your inner child and question your own lecture. What questions could a child still ask — especially about the newest parts of your lecture? Can you answer those? Is there a gap in your understanding?

This back and forth with yourself is how Feynman defined “studying” and “working hard.” This intellectual curiosity and willingness to break down complicated topics to expose your own ignorance was how he approached most new things in life. It was through this time and effort that he learned and shared everything that he did, and those of us who are not destined to earn a Noble Prize can still put the same ideas to good use.

You asked me if an ordinary person, by studying hard, would get to be able to imagine these things like I imagine.

Of course! I was an ordinary person who studied hard. There’s no miracle people. It just happens that they got interested in this thing, and they learned all this stuff. They’re just people. There’s no [science] talent — a special miracle ability to understand quantum mechanics or a miracle ability to imagine electromagnetic fields that comes without practice and reading and learning and study.

So, if you say you take an ordinary person who’s willing to devote a great deal of time and study on work and thinking and mathematics and time — then he’s become a scientist.

1. Whatever you are trying to learn, take a stab at learning it

2. Write everything down, in as simple a way as possible, as if you were preparing a lecture for an inquisitive child

3. Ask questions as if you were a child to identify gaps in your understanding

4. Repeat step 3 until the questioning adds no incremental value

While not stated explicitly by the man himself, the Feynman Learning Technique finds its inspiration in the life of Richard Feynman. He was constantly learning, teaching, tearing apart, and then reorganizing the various things he found interesting.

Because of this and his good-hearted, tireless sharing of the outcomes with others, Feynman is remembered not only for his work in physics but even more so for the beautiful mind and quirky personality that made him who he was.

Related Stories
Subject Matter
Learning from the OSS: Destroy Your Organization by Following the Simple Sabotage Field Manual by @stanrivers
#business
How To Be More Productive with Pomodoro Technique and Google Calendar by @vineethv
#productivity
Leaders Embody Values: Live By Your North Star by @patrickmccarthy
#leadership
Leaders Embody Values: How to Become a Better Manager by @patrickmccarthy
#leadership
Why Efficiency Drives Tech Innovation by @stephaniezen
#technology
The Future of Education in the 21st Century by @roxanamurariu
#education