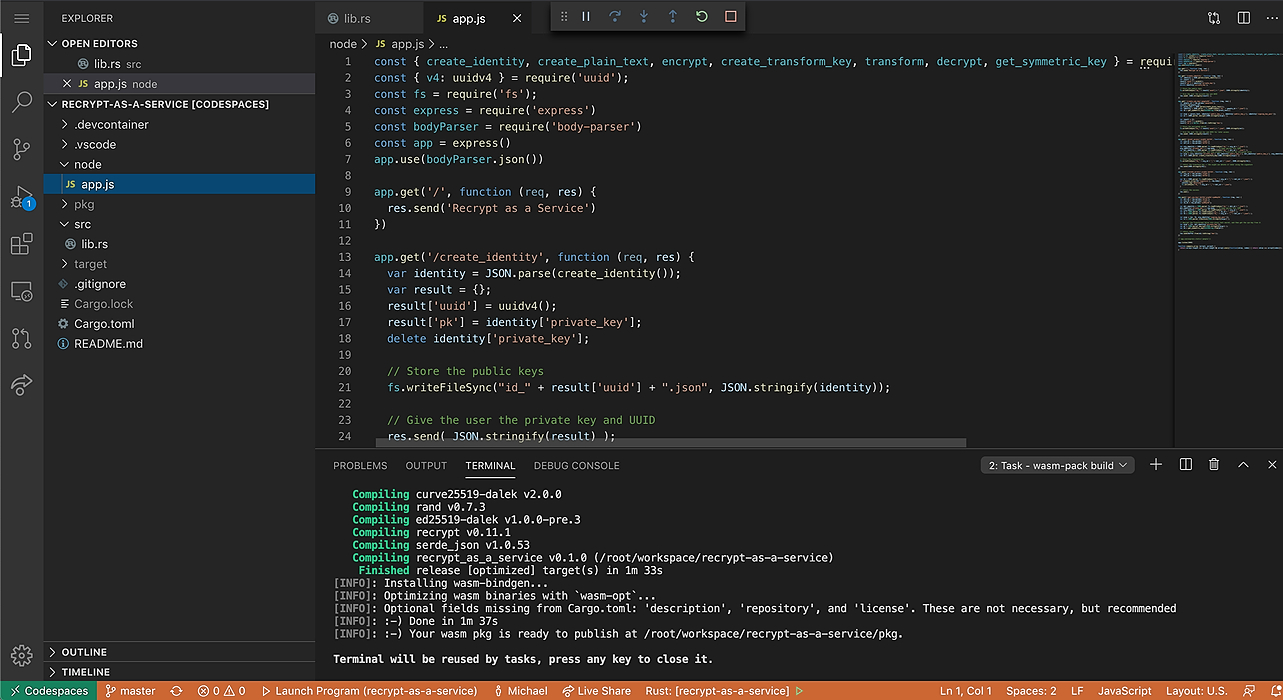 Rust and WebAssembly for the server-side

Build a scalable and privacy-first Internet on Second State’s serverless infrastructure. Get the email newsletter on Rust, WebAssembly, serverless, blockchain, and AI.

The Public Key Infrastructure (PKI), invented over 40 years ago, has been the bedrock for security and privacy on the Internet. While PKI algorithms are behind the most internet security protocols, such as HTTPS and TLS, the idea for individuals to use public keys to exchange data, (eg, PGP), was not adopted on a large scale.

Traditional PKI is not scalable. It is an

complexity problem for an individual to encrypt and send each of her files () using the public key from each of the recipients ().

Centralized file-sharing services, such as Dropbox, reduced the problem complexity to O(n+m) as the individual only needs to upload each file once and to manage her contacts list one person at a time.

The complexity could be further reduced to O(m) as the centralized service automates file uploading. The centralized model has proven scalable but also brings significant privacy implications. The service at the center “sees” all data and can be hacked even if they do not do evil themselves.

The centralization of Internet and the evasion of privacy is one of the reasons Mozilla called for “fix-the-Internet”. Second State is one of the teams that responded to the call and joined the Open Labs to develop a prototype product for a privacy-first Internet. Apply for the Mozilla Builders Incubator program for $10k to $75k in funding!

In recent years, the proxy re-encryption scheme has emerged as a way to reduce the complexity of privacy-first file sharing to N+M. The idea, known as Orthogonal Access Control, is for the individual to encrypt each file once and store the encrypted data on a server. Then, only approved recipients have the ability to download and decrypt the data. A recipient can be added to or removed from the access list at any time.

There can be one or more server-side repositories facilitating the sharing, but none of the servers can decrypt the data. In fact, the file repositories can be open and anonymous and yet still private to people who holds the appropriate private keys.

Second State has developed a suite of open source tools and runtimes for the cloud native Internet. Second State tools enable developers to write fast, safe, portable, and serverless functions that can be deployed as web services. In Mozilla Open Labs, the team sets out to build web services that streamline and simplify developer adoption of proxy re-encryption in building privacy-first applications.

As part of its Mozilla Open Labs deliverable, Second State has released a developer preview of its recrypt-as-a-service open source software. The software enables developers to create public key management services on the Internet. Here is a typical user story for using this service to share private data.

Each individual (Alice, Bob, and Charlie etc) creates an identity on the service via a create_identity request.

The Second State is based on IronCore Labs’ open source proxy re-encryption implementation library. This library is written in the high performance Rust programming language. Second State provides a WebAssembly-based runtime to provide this library as a safe and scalable Internet service. Learn more about Second State’s software platform.

In the era of COVID-19, online privacy is more important than ever.
Telemedicine solutions are increasingly used to avoid infections from hospitals visits. More than ever, we need to share personal medical records with multiple members of the care team in a secure and private manner. As societies re-open, data surveillance efforts such as immunization passports and contact tracing are increasingly used to ensure public safety. It is paramount that we do not give central data repositories, such as governments or big corporations under government contracts, the ability to infringe on our privacy.

Hence, the next phase of Second State’s work in Mozilla Open Labs is to build prototype user interfaces for privacy-first exchange of personal medical information.

PS. Stay in touch! Get the email newsletter on Rust, WebAssembly, serverless, blockchain, and AI.

Related Stories
Subject Matter
Partner with us for Digital Product Development by @AWH
#promoted
Easier and faster dapps on the Ethereum Classic blockchain by @secondstate
#ethereum
Building React Applications with Deno and AlephJS by @akashsjoshi
#javascript
How To Setup Unit Tests with TypeScript: Beginners Guide by @mxkvl
#javascript
13 Retail Technologies That Could Help Brick-and-Mortar Businesses by @itrex
#retail-technology
What is Hybrid Work and Why is it the New Norm? by @runningremote
#business
Google Core Web Vitals Optimization: A Beginners Guide by @seosandwitch
#core-web-vitals