Scouting for Unicorns in a Sea of dApps 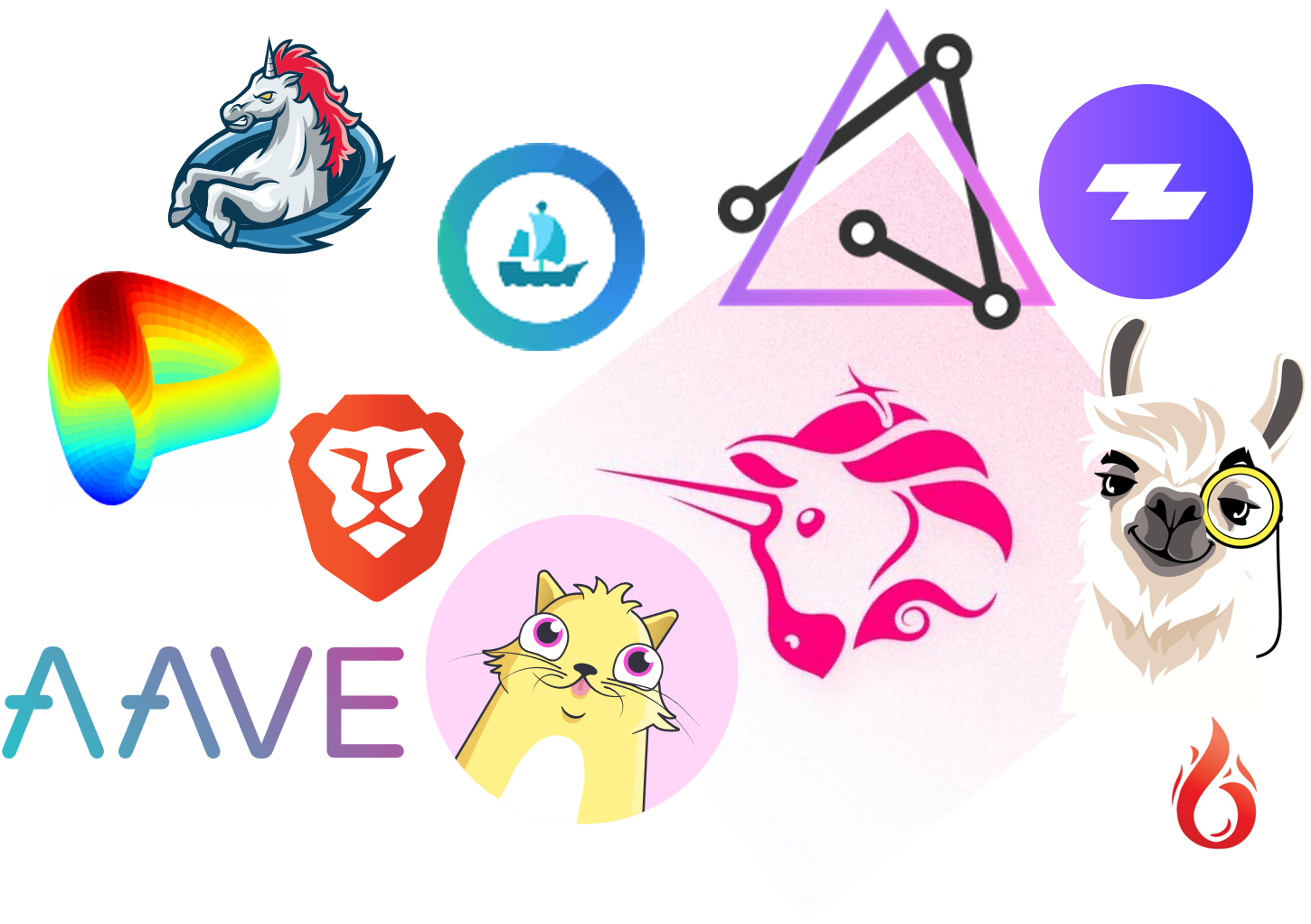 The onset of Web 3.0 has been marked by a flurry of decentralised apps (or dApps in short) making their way into our daily lives. dApps take the modular approach to applications and combine it with a non-centralised management structure. In a world, where personal data integrity and freedom of speech is increasingly important, dApps will play a major role in creating a more safe space for end users when it comes to individual privacy and data access liberty.

However, many dApps aren’t scalable at this moment due to throughput limitations of blockchains in their current avatars. Hence reaching to a million users is often a distant dream for many. In spite of technical challenges, some dApps have still made it to the magic figure and continue to scale to many more. Others have since lost favour with users after crossing the million user mark. It will be interesting to watch how some of these platforms which have already tasted the million figure, grow further and if any would eventually touch a billion users, or unicorn status.

Right off the bat, Brave browser by JavaScript creator Brendan Eich comes to mind. With 15 million monthly active users (MAU) and 5 million daily active users (DAU), Brave is quite possibly the most popular dApp out there. Started in 2015-16, Brave is a multi-platform open source web browser that blocks ads and web trackers and lets users send cryptocurrency payments. Users can also earn Brave’s native cryptocurrency BAT (Basic Attention Token) by opting to watch ads while browsing on Brave. Through the revenue sharing model, Brave returns 70% of its ad revenue to end users. The project is backed by Peter Thiel, Pantera, Digital Currency Group etc. It had also conducted an ICO for its token which raised 159k+ ETH in return for 1,000,000,000 BAT tokens back in 2017. 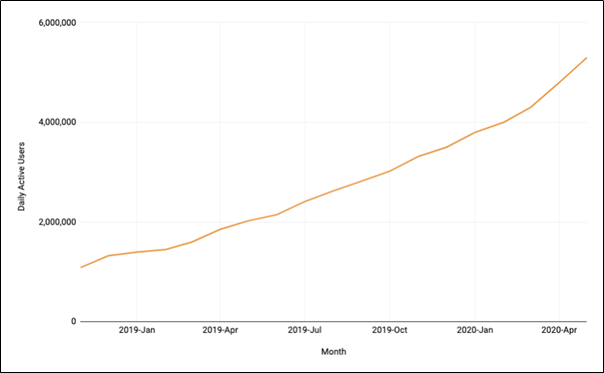 In a recent study by Prof. Douglas Leith of Trinity College Dublin, Brave was found to be the most privacy-focused among all major browsers (including Chrome) –

…Brave is by far the most private of the browsers studied.

Cnet has also termed Brave as the fastest browser on mobiles and desktops. This is in part due to low memory usage from its no-tracking and no-ads policy. In other browsers, tracking and ad blockers act as additional plugins which create a strain on resources.

In spite of all the great features, Brave’s operating history hasn’t been free of controversies. In late 2018, it was discovered that Brave’s default opt-in setting for contributors meant that any donation sent to them by users were held back by Brave unless the intended recipient sought its release. Brave has since then changed the default setting to an opt-out from the opt-in. More recently, it was found that the browser was auto-completing links to certain platforms and adding its own referral codes at the end. This led to a major uproar on social media and Brave had to release an update that disabled auto-insertion of affiliate codes to links.

A once popular dApp that has raked in millions of users in a fairly short amount of time is CryptoKitties. One can consider them to be Tamagotchis on the blockchain. CryptoKitties is an Ethereum-based game where players can trade and breed virtual cat-like collectibles. Each collectible comes with unique traits (or, cattributes) which are rare and non-replicable making each cat one of a kind. Some of these features are unlocked over the lifetime of the collectible as it is bred with others to generate offspring. Traits from parents are often passed on to these offsprings. Some of the most prized cats have sold for as much as USD 300,000 in auctions. These collectibles also act as playable characters in the KittyVerse games. CryptoKitties is backed by Union Square Ventures, Andreessen Horowitz and others. 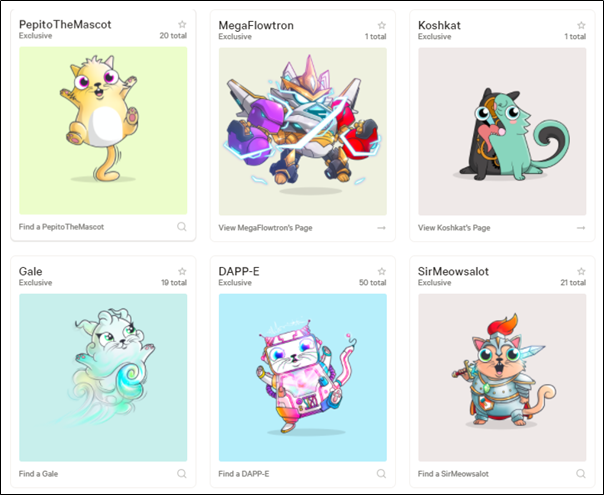 While at the beginning, generation zero cats were minted fresh from
scratch, new cats are now generated by breeding. It is estimated that a total of 4 billion cats can be bred in total.

At one point of time, such was the craze for this game that it was able to single-handedly slow down the Ethereum network by accounting for nearly 10% of traffic on the blockchain.

This actually led to many developers in the Ethereum ecosystem (from Metamask, Infura etc.) get together to resolve bottlenecks in the short term and start building long term scaling solutions.

There have been many more collectibles-based games that have released after this and CryptoKitties daily player count has gone down significantly since. However, it is a constant reminder of the virality of dApp games and their potential for scaling. Just last week, another popular dApp called Uniswap, which is a DeFi protocol for swaps and pools, nearly choked the Ethereum network by airdropping their native UNI token to users who had to claim the tokens on-chain. Even though, Uniswap is far from a million user stage at the moment, it seems well on its way towards it.

One of the newest entrants into the million user club in the dApp space is Tachyon VPN, Tachyon Protocol’s VPN solution. Tachyon Protocol is working on an alternate stack to traditional communication protocols. It is based on the blockchain database cloud project V Systems. The team at Tachyon comprises the inventor of Proof-of-Stake consensus mechanism Sunny King, Peercoin founder Peerchemist and FinTech investor Alex
Yang.

Tachyon VPN is the project’s first dApp and is a dVPN (decentralised Virtual Private Network) which routes user traffic through publicly distributed nodes after encryption, encapsulation and simulation. Encryption is the process of encoding data to hide its nature and content from third parties. Encapsulation is the rearrangement of data packets to further obfuscate the information being relayed. Simulation refers to the process of impersonating a communication protocol to make a data packet look like something else to the outside eye. As of the time of writing, Tachyon VPN has ~1.58M+ users and ~1.5k nodes to choose from. 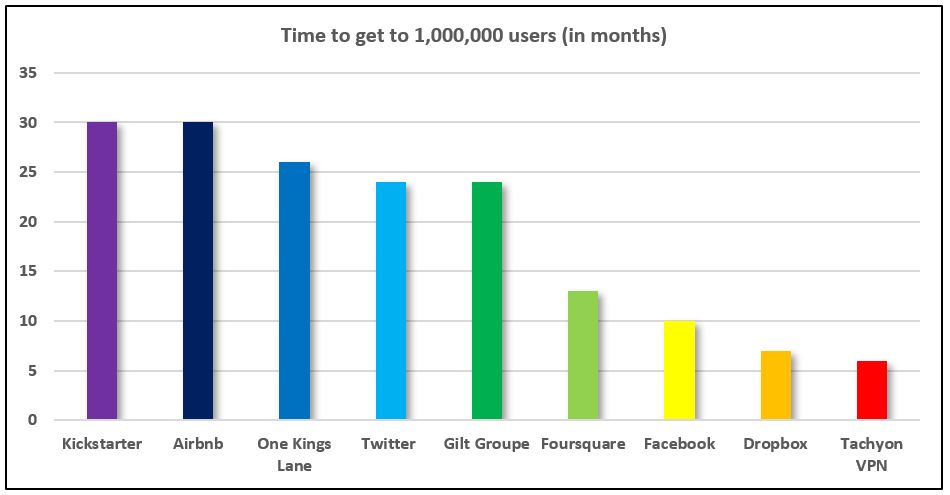 The project is focused on censorship-resistance and upholding individual
liberties.

During the recent internet blockade on citizens in Belarus to counter protests, Tachyon VPN became one of the most downloaded apps both on the Google Play Store and the Apple App Store according to a Gizmodo report.

This is just one of the many examples of when a decentralised application has come to the rescue during moments of crisis. In countries with limited internet accessibility, Tachyon VPN is a popular dApp as well for obvious reasons. With the upcoming launch of its Node Manager 2.0 and partnerships with leading cloud computing platforms like Amazon Web Services (AWS) and Google Cloud, Tachyon VPN user base is poised to grow even more. On top of that, the native IPX token encourages small VPN providers to become independent of Platform Partners on Tachyon through its planned bandwidth marketplace.

As the world fast approaches towards the data sovereignty era, this continued emphasis on decentralisation will become even more intense. For corporations, businesses, and applications finding one's footing in the new landscape and getting into millions of hands will be challenging. Some of those mentioned above already have a headstart compared to others, but it will be a matter of time to see where they go from here. From the looks of it, Brave and Tachyon VPN are just getting started. Uniswap looks close in pursuit as well.

Disclosure: The author has used all four platforms but has no vested interest in any of them. He currently holds a very tiny amount of BAT and UNI tokens through earnings/airdrops. He does not own any IPX tokens or any CryptoKitties currently.

Related Stories
Subject Matter
Book a Demo. Ship Fast. Rest Easy. LaunchDarkly. by @LaunchDarkly
#promoted
The Ultimate Guide for Cryptocurrency Guides – No, This Is Not A Typo by @abhijoysarkar
#bitcoin
Why These Four Developer Debates Are A Waste Of Time by @zachflower
#best-practices
Let's Talk About Vanilla JavaScript: What Is Vanilla JS, and Why Should I Spend Any Time On It? by @shinetechnicallywrites
#javascript
Insert JavaScript into HTML Using the Script Tag by @manik
#javascript
The Role of Blockchain and Decentralization in the Digital Economy by @maddykutechno
#decentralized-internet
My First Impressions on BitClout by @TheLoneroFoundation
#bitclout