Scale By the Bay 2018: A No BS Hacker Conference 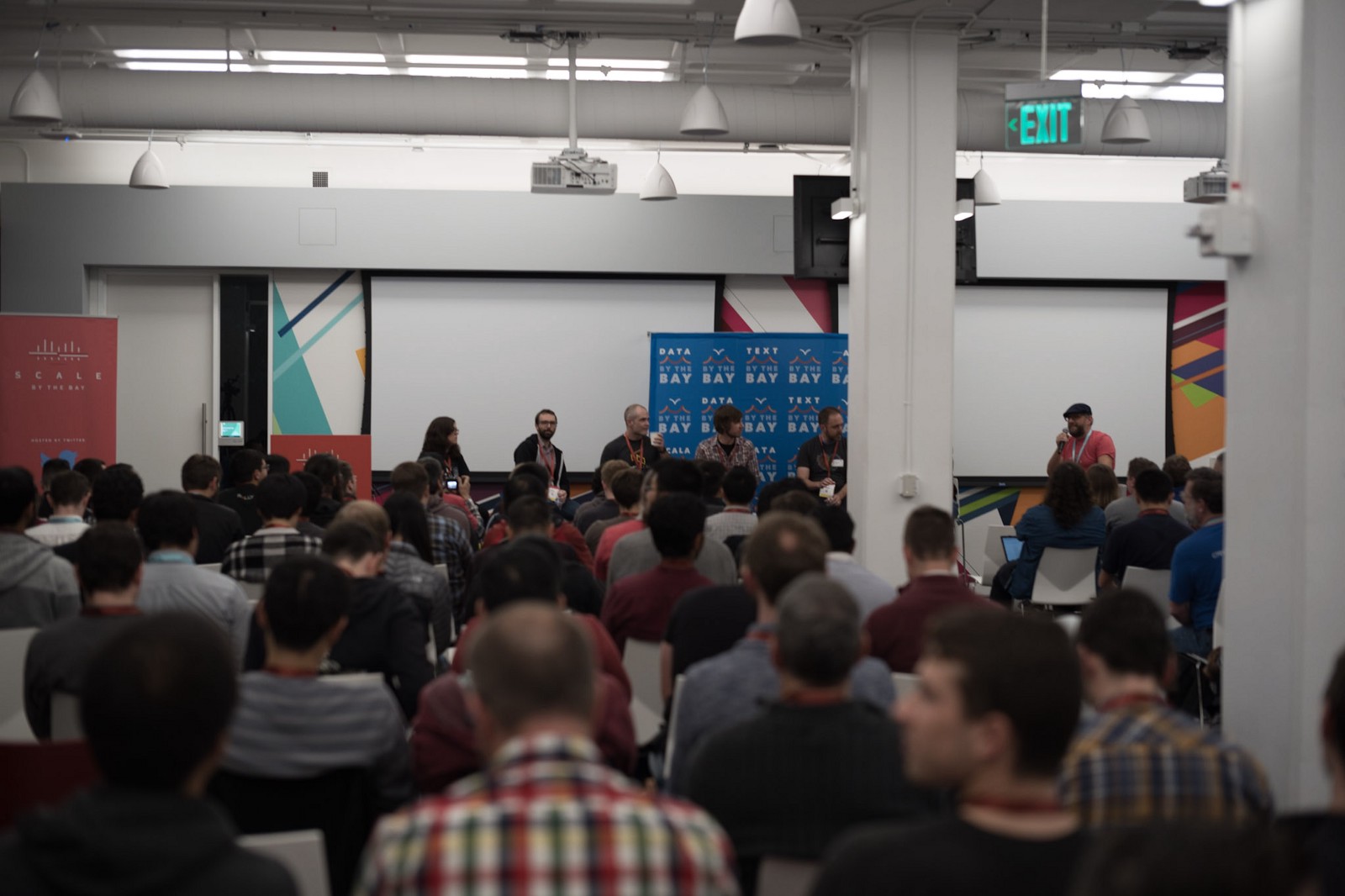 Scale By the Bay (San Francisco, Twitter HQ, November 15–17, 2018) is the iconic developer conference in San Francisco, now in its sixth year. It started as Silicon Valley Scala Symposium, or simply Funconf, for Functional and Fun Programming, in 2013, and has its origin in SF Scala and SF Spark meetups.

Intel Santa Clara hosted us with their Cue system, that is written in Scala and now is a part of Verizon. They built some of the largest functional codebases using scalaz, the category theory framework in Scala, and developed systems like Nelson, deploying Scala code with rigor. The group produced such stars as Ryan Delucci, Tim Perrett, now at Lyft, Runar Bjarnason, now a cofounder of Unison, and Adelbert Chang, now at Target — all regular speakers By the Bay.

We became Scala By the Bay in 2014, and Scale By the Bay last year, reflecting a broad spectrum of programming languages we always had, all focused on thoughtful engineering with what you got. Over the years it has developed a passionate community, which is essentially the developer community of the Bay Area focused on web-scale backend programming — that always included distributed systems, correctness by design, test-driven development, and devops underpinning deployment discipline. By now it includes Machine Learning, AI, full-stack programming based on strong types, and cloud/edge/IoT iterations of distributed systems. For the first time this year, we have a small blockchain engineering track, represented by a Haskell and a Scala startups building enterprise blockchain platforms that are correct by design.

There are three tracks, by now traditional, going over three days each, and roughly reflecting the key interests of the community:

Thoughtful Software Engineering is an extension of the original Functional Programming track, and it emphasizes the fact that we have a lot of developers working in Java, C++, and languages that are not [purely] functional. However, what unites us is the step-back approach — take stock of the problem as an instance of a general case, do not repeat yourself, and generalize to composable abstraction when you are ready. Then make them available to all as open-source libraries, supported by blog posts, talks at our meetups, SBTB and elsewhere.

Reactive Microservices — these are the approaches to software architecture that compose the whole from parts and also make those parts interact seamlessly or at least in ways easy to reason about and debug.

End-to-end Data Pipelines (optionally for ML/AI) — our systems span the whole stack from devops to AI apps, and we have the best of them. Companies like Salesforce present data from inception to AI for each organization helping customers derive value from their own user data.

The AI Panel includes Ruchir Puri, the IBM CTO of Watson, Peter Skomoroch, the head of Data Products, Workday, Peter Bailis, Associate Professor at Stanford and cofounder of the DAWN lab as well as sisu.ai, Michelle Casbon, ML engineer at the Google Cloud, and moderated by Lukas Biewald, the founder of CrowdFlower (now Figure Eight) and now Weights and Biases.

One of the strongest themes this year is Streaming Data. Neha Narkhede, cofounder of Confluent and co-creator of Apache Kafka, is keynoting Day 2. Streaming talks include Apache Flink and Beam from Lyft, Reactive Java from Oracle, Scala/Akka real-time from Capital One, Alpakka, Akka/Kafka connector from Lightbend, and many more.

AI with data processing at web-scale is one of the strongest tracks — we deal not with AI as graphs and notebooks, but real-time feedback loop for millions of users, such as those of Uber, Twitter, or Saleforce. Our approach is integrated data pipelines for Machine Learning and AI, where processing and aggregation is an integral part of AI and also loops in with UX and all operationalized with proper DevOps. We look at the Strongly Typed Tensolrflow, Horovod, the fast Deep Learning training from Uber, and AI on AI from Sourced.tech, amonf many other AI engineering talks.

We look at emerging technologies via engineering presentations with code — this year it is Quantum Computing with Q# lead from Microsoft and Scala from JP Morgan Chase. We also found a good way to understand blockchains as distributed systems, with functional implementations in Haskell, from Symbiont, and Scala, from Constellation Labs.

Our audience grows year on year, and all the sponsors are hiring engineers. 70% of sponsorship goes back to the sponsors as engineers’ passes, and everybody comes home with hands full of OSS ideas to try, stacks to test, and specific projects to implement. We think of SBTB as “take home a backend”. Every year we do one training, a bespoke, full day, hands-on workshop taught by the leading developers who often are the creators of the technology in hand. In 2015, we created and ran the SMACK Stack, the notion we also created (Scala/Mesos/Akka/Cassandra/Kafka). Last year, we did the Istio/Envoy training with the Google Istio team and Matt Klein, the creator of Envoy. This year, our own training, Advanced Software Engineering, is taught by Cliff Click. We also have multiple collocated trainings — Bill Venners, the co-author of the foundational Staricase Scala book, it teaching both an introductory and advanced Scala Retreats at Damiano, with hiking, and John De Goes, a legend of Functional Programming, teaches a four-day course on Functional Scala. We are the only community that could field dozens of students taking four full days of Category Theory!

So if you are a hacker at heart, join us on November 15 at Twitter HQ! Reserve your seat at scale.bythebay.io.