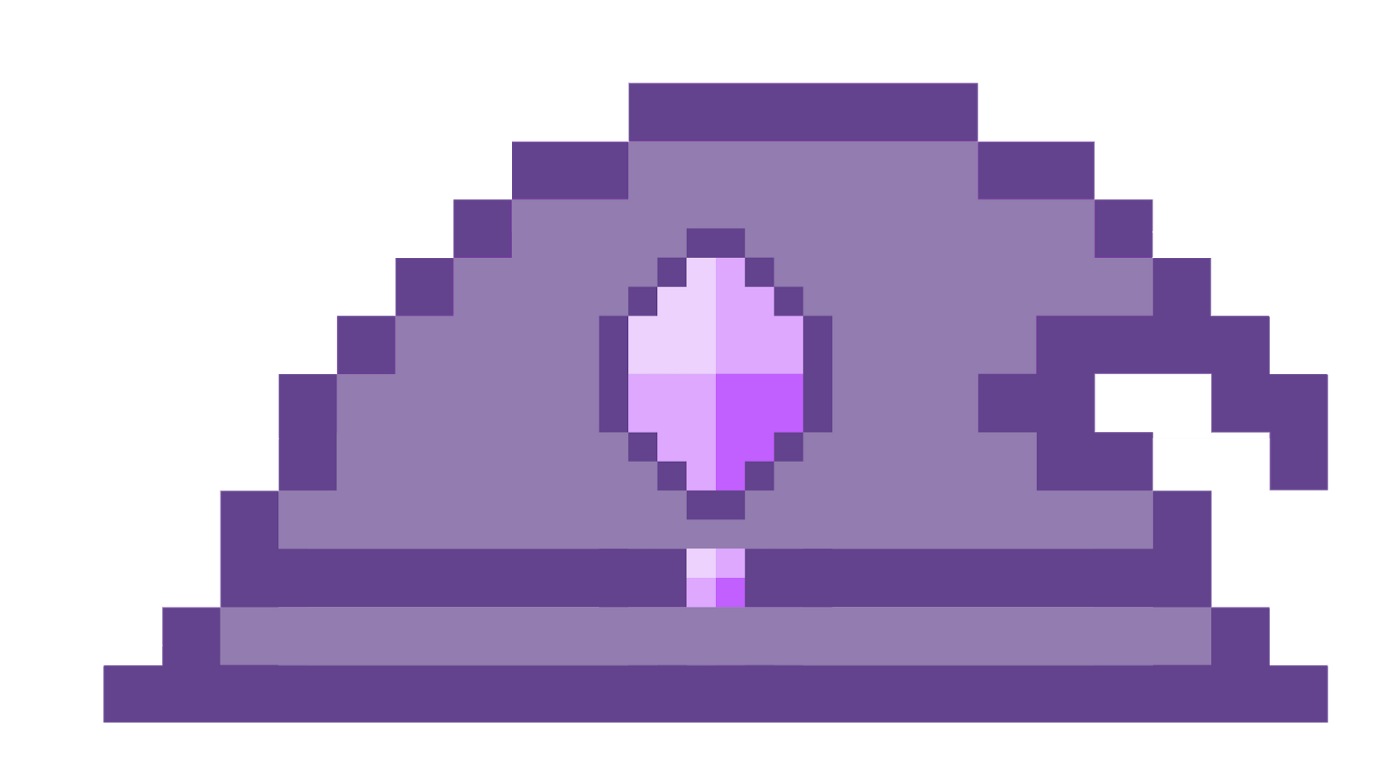 Trainee lawyer messing around with crypto.

In the wake of DeFi’s food token moment and animal rearing season, a new type of farmer has emerged.

Enter the rarity farmer. He knows the ways of his closely-related sibling, the yield farmer, who diligently stakes his coins for returns. But beyond that, he also seeks to reap an additional layer of value through cultivating and harvesting a range of unique crops.

The recent NFT (Non-Fungible Token) boom has provided him with fertile ground, and now all that’s left to do for him is to get to work.

“Rarity farming” is a relatively new concept in the cryptoverse. It is a novel game mechanism designed to encourage and reward thoughtful and sustained interaction in the ecosystem of a particular project.

If you’re a gamer, this works similarly to the concept of grinding it out. You spend time and effort in its metaverse to level up, obtaining spanking new gear and the respect of your peers along the way.

The difference is that with rarity farming, you also have to weigh your actions against what you think other players might do. At the end of the day, the goal isn’t purely to level up, but to create an NFT with a scarce combination of traits.

Then, you can either sell it for a high value on collectible marketplaces such as OpenSea, or keep it around to farm rewards from the project itself.

In the context of Aavegotchi, the project that pioneered this concept, players are able to increase the rarity of their avatar as they engage with components of the project’s metaverse.

This avatar comes in the form of a playable-NFT ghost (also known as an Aavegotchi) that is backed with an aToken from Aave. In addition to being able to trade it, Aavegotchis with high rarity levels are also able to periodically farm rewards in the form of $GHST, the project’s native token.

While the concept might appear similar to the Cryptokitties craze of 2017, Aavegotchi’s mechanism extends far beyond simply breeding cats and trading wearables to equip your virtual pet with. The latter’s universe also makes use of mini-game participation and voting in the AavegotchiDAO to vary your Aavegotchi’s traits and rarity level.

There’s been a fair amount of hype surrounding the project, given the burgeoning NFT market and the project’s support from Aave. While we aren’t able to interact with Aavegotchi’s Mainnet game yet, there are other ways to kick start our rarity farming efforts as we wait for its release early next year.

It’s only been one and a half months since the project’s bonding curve publicly launched, and it has already captured 6.6 million DAI in reserves. Whether you’re a budding gardener just starting out, or a seasoned horticulturalist seeking new horizons, it’s a good time to get your hands dirty by staking $GHST.

Staking isn’t a particularly new means of generating gains. The basic premise is that you lock up your coins under a particular protocol, in exchange for a variety of benefits. In the context of the NFT world, several projects have allowed users to put their coins to work in such a manner. For instance, MEME allows users to stake the project's native tokens in exchange for points, “pineapples”, which they can exchange for limited edition NFTs.

Aavegotchi takes this process of staking to gain NFTs one step further, by integrating it with the process of rarity farming. When you stake the project’s native $GHST token and win a wearable, you’re not simply obtaining a limited edition NFT which you can then choose to trade or keep. You’re also obtaining a wearable which acts as a rarity multiplier for your Aavegotchi upon equipping it. Additionally, when you stack multiple wearables on your Aavegotchi, you’re setting yourself up for a potentially bigger gain down the line. This is especially if those wearables form part of a complete set, and you’ve somehow managed to obtain them all.

The mechanism is simple – you stake $GHST, the project’s native coin, and earn FRENS points in return. Every 24 hours produces 1 FRENS point, per $GHST you stake. As you accumulate your comfy reserve of FRENS, these can then be exchanged for tickets that entitle you to a chance of winning wearables of varying rarity levels in a series of Aavegotchi raffles. These will correspond to the rarity level of the ticket you obtain.

These raffles will typically last for a period of 72 hours, during which, users will stake their tickets to be entered into the raffle. Once a ticket is staked, it cannot be reused in a subsequent raffle. When this Staking Period is over, Chainlink’s VRF is used to determine the winners, who may then claim their prizes. More information on the specifics of the mechanism can be found here. 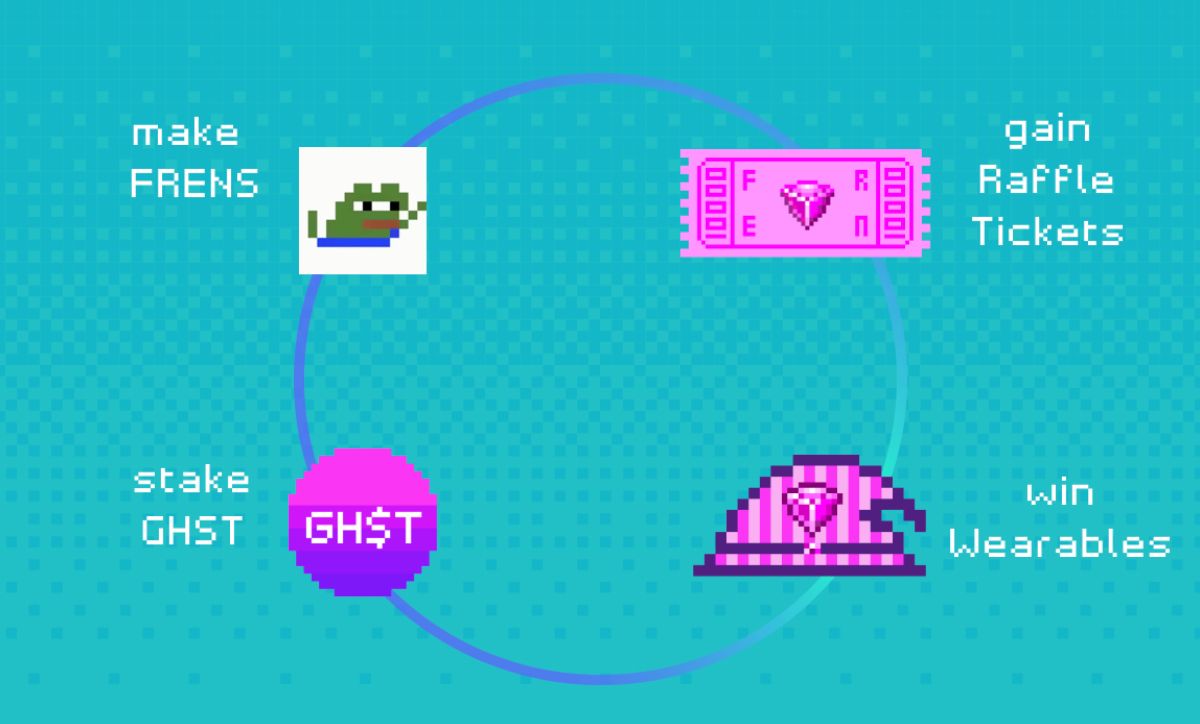 While some users might balk at the fact that what they’re obtaining in exchange for their FREN points is a mere chance at winning, here’s something important to keep in mind - you incur no additional monetary cost from staking your $GHST. It would hardly be sustainable (and honestly, a little troubling) for a project to endlessly allow for the creation of actual monetary value out of nothing.

More importantly, NFTs and their wearables derive their monetary value from scarcity. If you’re thinking about making gains as a farmer in the long run, this scarcity is what will provide you with the environment your figurative crops need to thrive. If Aavegotchi were to allow anyone with FREN points to mint a wearable, the market would have a huge surplus on its hand. As time goes by and more wearables get minted, the value of the wearable will only continue to drop as this surplus grows.

Beyond this, the element of verifiable randomness also increases the chance of everyone having a seat at the table. Given the exclusive nature of these wearables, only a limited supply is minted each raffle. Operating on something like a first-come-first-serve basis would in effect allow a small number of whales to sweep the entire supply up, leaving only scraps for the average cryptoletariat farmer. The use of Chainlink’s VRF in this raffle model provides smaller farmers with at least some chance of making gains, especially if they start staking early.

Maybe it ain’t much, but it certainly is honest work.

LINKing Up With Our FRENS

For its inaugural raffle on 10 November 2020, the Aavegotchi team minted a series of LINK-themed wearables to celebrate its first integration of Chainlink’s VRF. From hardcore marines dead set on building a Ser-gotchi, to traders just looking to flip wearables for some extra coins, the event gave everyone something to be excited about. To ensure their rarity, the event was the only time that LINK-themed wearables were minted.

If you're curious, check out what was up for grabs below. There were virtual uniforms to express allegiance to the marine moon mission, comfy captain uniforms for anyone who bought a new yacht with their LINK, and of course, a bunch of mega-based plaid shirts. 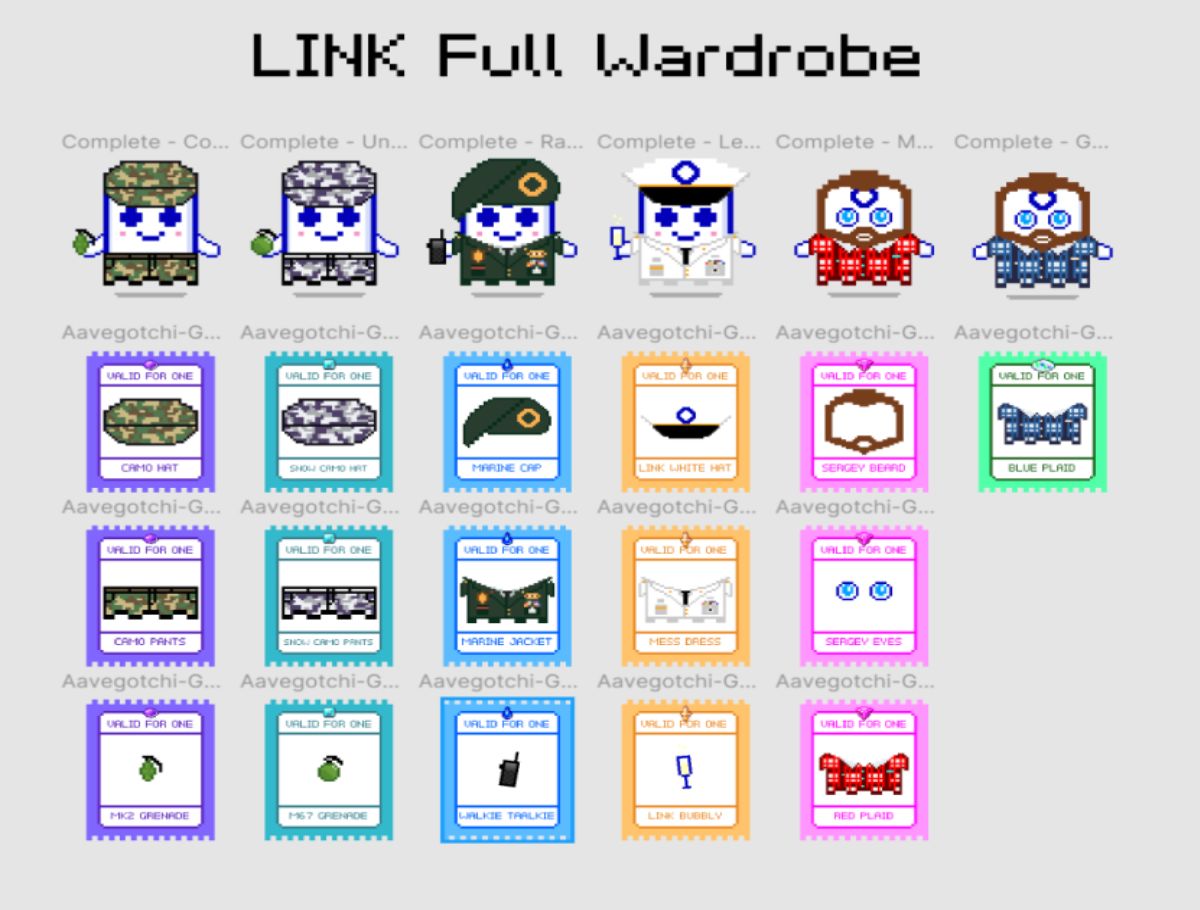 While this raffle has ended, stay tuned and stake anyway. The team plans to hold at least two more FRENS-exclusive wearable raffles before the Mainnet launch. When those events happen, you wouldn’t want to find yourself in a situation where you’d kill to win another limited edition wearable, but don’t have enough FRENS for raffle tickets.

Ultimately, most projects reward their early adopters, whether actively or passively. The former sees project leads doling out rewards to incentivize further participation, while the latter sees these rewards being realized through the growth in value of the project’s ecosystem and assets.

Because of this, the best time to invest in a project with potential (assuming you’ve done your research and due diligence) tends to be around its inception. If you’re planning on venturing into the world of NFTs and rarity farming, this is something worth keeping in mind.

You know how the story goes. As a project’s ecosystem and community continues to grow over time, demand for its tokens and its related assets grow. As time goes by and more players enter the market, the value of rare and provably scare NFTs go up.

If you’re already feeling the FOMO and are ready to ape in, just remember - safuty first. Luckily, Aavegotchi’s staking contracts have been thoroughly vetted by dozens of Solidity developers, through a robust bug bounty program. The project has additionally been audited by QuantStamp, a leading blockchain security specialist. No bugs were found during this audit, and its full report will be released soon.

Notwithstanding my obvious bias, playable NFT projects like Aavegotchi are in a particularly good position to grow overtime. Their huge crossover appeal sees the DeFi diehards, NFT nerds, degens and gamers all coming together under the aegis of one community. It is this versatility that sets up such projects and the NFT market as a whole for the kind of explosive growth we all love to see.

Any farmer worth his salt knows that time and knowledge are his most valuable assets. If you ask me, I’d say it’s a good time to start staking for FRENS now, and to start learning about the different ways you can continue helping your $GHST grow. The project’s whitepaper and Discord are some good places to begin.

The early farmer gets the yield, and there’s a harvest coming with the launch of Aavegotchi’s Mainnet in late Q4. Get yourself primed - you don’t want to miss out.

WTF is An Aavegotchi? An NFT? An Internet Ghost? Or All Of The Above?