Proof-of-stake is coming of age.

As we look back on 2020, we’ve seen a fundamental shift in the success of proof-of-stake (PoS) networks, with triple the representation among the top ten crypto projects compared to a year ago, accounting for around 15% of the total market cap. 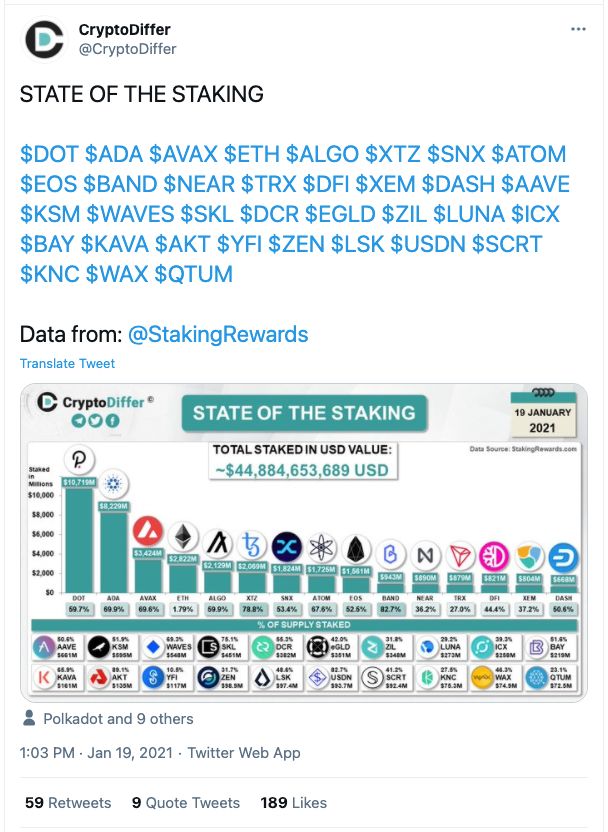 With dominance continuing to grow and a flurry of development activity underway, the PoS crypto sector is set up for a breakout year.

But what exactly is proof-of-stake, and who are the runners and riders to look out for in 2021?

PoS uses an election process for validators of the next block based on randomization, the number of tokens staked, and the staking age. Instead of generating rewards proportional to the energy spent, they are in proportion to the token ownership stake.

Just like with PoW, when PoS is required, attackers need to obtain 51% dominance to carry out an attack. Although difficult to acquire enough of a reputable token, it would not be in the interests of a staker with 51% to attack the network in which they hold a majority share. If the value of the token falls, so does the value of their holdings, meaning that even if a stake owner reaches a majority, they are incentivized to maintain a secure network.

Variations on the specific type of PoS mechanism are deployed by different networks. Here’s how four of the leaders handle it.

Polkadot is a sharded multichain network, coordinated by its layer 0 relay chain, that can process transactions on several chains in parallel, known as “parachains.” Parachains derive their security from that of the entire network, significantly improving scalability and interoperability, eliminating the bottlenecks of legacy networks.

Polkadot uses NPoS (nominated proof-of-stake) as its election mechanism, designed with the roles of validators and nominators, to maximize chain security. Stakers interested in maintaining the network can run a validator node. Other DOT stakers can participate as nominators, backing up to 16 validators as trusted candidates. Validators produce new blocks, validate parachain blocks, and guarantee finality. Nominators can choose to back specific validators with their stake.

The system pays out validation rewards equally to all validators regardless of their stake, with staking rewards then distributed pro-rata to all stakers after the validator payment is deducted. This incentivizes the nomination of lower-staked Validators to create an equally-staked validator set.

Polkadot is currently the leading, highest value, and most secure PoS platform, offering estimated rewards of 13.87% per year with over $10 billion in staked value. It has a market cap of over $15 billion, and 59.27% of eligible tokens staked. DOT can be staked on major exchanges like Kraken and Binance or using a Ledger Nano via Polkadot-JS.

Cardano is the first blockchain platform founded on peer-reviewed research and developed through evidence-based methods, providing verifiable security, scalability, and sustainability to decentralized applications and systems.

Cardano’s Ouroboros proof-of-stake protocol allows ADA holders to earn rewards by either delegating their stake to a stake pool run by another party, or by running their own stake pool and pledging some or all of their stake to it.

The amount of stake delegated to a given stake pool is the primary way Ouroboros chooses who should add the next block to the blockchain and receive a monetary reward for doing so.

The higher the stake delegated to a stake pool, the more likely it is to make the next block, with the reward earned shared proportionally between everyone who delegated to that stake pool.

Cardano holds the second-highest amount of staked value, with over $7 billion and a market cap of over $10 billion. It offers estimated annual rewards of 4.29%, with 70.23% of all eligible tokens being staked. ADA can be staked on major exchanges like Bitfinex and Binance, as well as the Ledger Nano and Trezor Model T hardware products via Yoroi or AdaLite wallets.

Ethereum 2.0 refers to a set of phased interconnected upgrades that will make Ethereum more scalable, more secure, and more sustainable. The Beacon Chain brought staking to the network in December 2020 (phase 0). Phases 1 and 2 will also need to be deployed to enable staking for the entire network and fully transition from PoW to PoS, currently estimated for 2022.

With Ethereum 2.0, the PoS consensus mechanism will require validators to stake 32 ETH to run a validator node on the network, which they are also responsible for building and maintaining. Each time a block is set to be proposed, random committees of validator nodes will be selected from the entire pool of validators to attest the block in a provably secure way.

Given the high barriers to entry in terms of infrastructure, expertise, cost, and risk, many may choose to stake via staking providers like Binance or potential staking pools instead. Either way, it should be noted that once ETH is staked, there is no going back to the original chain. Therefore, despite attractive yields, stakers must balance the risk that staked ETH will be locked up and illiquid for an indefinite period, currently estimated at 18 months.

Ethereum’s staked value is just over $2.5 billion, with a market cap of over $135 billion, and only 1.87% of eligible tokens staked. Estimated staking rewards are currently at 10.13% per year.

Tezos is an open-source platform for assets and applications that can evolve by upgrading itself. Stakeholders govern changes to the core protocol, including upgrades to the amendment process itself.

With Tezos Liquid proof-of-stake, any stakeholder can participate in consensus and be rewarded by the protocol for contributing to the security and stability of the network through a process known as “baking.” Each block is “baked” by a random stakeholder and endorsed by 32 other random stakeholders.

Bakers validate all transactions and add them to the blockchain to earn XTZ for securing the network. XTZ holders who do not wish to participate in consensus directly have the option to delegate their baking rights to bakers on their behalf, and receive rewards proportional to their stake minus a fee in return.

Tezos has secured a staked value of over $1.9 billion at the time of writing, with a market cap of $2.2 billion, and 78.8% of eligible tokens staked. With estimated yearly rewards of 5.37%, XTZ can be staked on major exchanges like Coinbase, as well as Ledger Nano hardware wallets directly in Ledger Live, and the Trezor Model T via the SimpleStaking wallet.

The Fastest Horse in the Race

PoS provides a great way to earn passive income in the crypto space, but it's not just about the level of staking returns.

There is no doubt that the Ethereum network benefits from the Lindy effect here. It’s the largest and most established network on a path to PoS, with the greatest number of developers and projects building on top of its blockchain. Its relatively slow transition to PoS with long staking lockups and a higher barrier to entry may hold it back, however, and despite its overall size, the value locked in staked tokens is only around 25% of those on the leading platform at present.

Of course, there are benefits to taking things slow, certainly in terms of security and the sheer amount of value now running through the network. However, as it could still take years to fully deploy Ethereum 2.0, the potential scalability bottleneck may prove too damaging to usability.

Polkadot is offering a solution to that, allowing projects to remain on existing chains while developing Parachains to connect to its network and benefit from higher levels of scalability and interoperability. It certainly seems to be attracting a lot of interest, quickly rising to the top of the PoS rankings at four times the amount of staked value compared to Ethereum, delivering the most secure solution in the pack with over $10 billion worth of tokens staked.

So, does the most amount of value accrue to the most interoperable and scalable chain or the one with the largest network effect? Time will tell. For 2021 at least, momentum is key, and as things stand Polkadot looks like the fastest horse in the race.