Overview of Artificial Neural Networks and its Applications 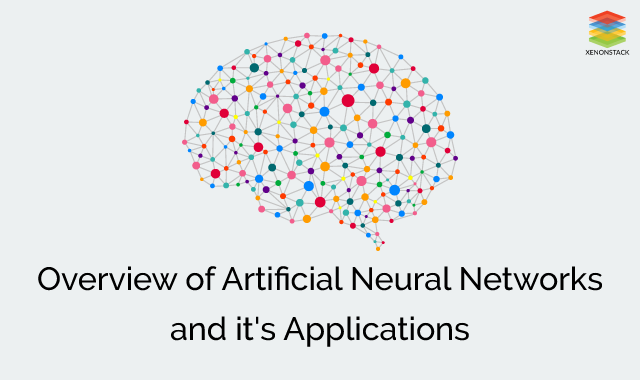 What is Neural Network?

Structure of Neurons in Brain

Dendrite — It receives signals from other neurons.

Soma (cell body) — It sums all the incoming signals to generate input.

Axon — When the sum reaches a threshold value, neuron fires and the signal travels down the axon to the other neurons.

Synapses — The point of interconnection of one neuron with other neurons. The amount of signal transmitted depend upon the strength (synaptic weights) of the connections.

So, neural network, in general, is a highly interconnected network of billions of neuron with trillion of interconnections between them.

How is Brain Different from Computers?

What is Artificial Neural Network?

Axon carry output that is analogous to the output unit in case of artificial neural network. So, ANN are modelled using the working of basic biological neurons.

How Does Artificial Neural Network Works?

Artificial neural networks can be viewed as weighted directed graphs in which artificial neurons are nodes and directed edges with weights are connections between neuron outputs and neuron inputs.

The Artificial Neural Network receives input from the external world in the form of pattern and image in vector form. These inputs are mathematically designated by the notation x(n) for n number of inputs.

Each input is multiplied by its corresponding weights. Weights are the information used by the neural network to solve a problem. Typically weight represents the strength of the interconnection between neurons inside the neural network.

The weighted inputs are all summed up inside computing unit (artificial neuron). In case the weighted sum is zero, bias is added to make the output not- zero or to scale up the system response. Bias has the weight and input always equal to ‘1’.

The sum corresponds to any numerical value ranging from 0 to infinity. In order to limit the response to arrive at desired value, the threshold value is set up. For this, the sum is passed through activation function.

Some of the commonly used activation function are — binary, sigmoidal (linear) and tan hyperbolic sigmoidal functions(nonlinear).

Binary — The output has only two values either 0 and 1. For this, the threshold value is set up. If the net weighted input is greater than 1, an output is assumed 1 otherwise zero.

A typical neural network contains a large number of artificial neurons called units arranged in a series of layers.

Perceptron — Neural Network having two input units and one output units with no hidden layers. These are also known as ‘single layer perceptrons.

Radial Basis Function Network — These networks are similar to the feed forward neural network except radial basis function is used as activation function of these neurons.

Multilayer Perceptron — These networks use more than one hidden layer of neurons, unlike single layer perceptron. These are also known as deep feedforward neural networks.

Hopfield Network — A fully interconnected network of neurons in which each neuron is connected to every other neuron. The network is trained with input pattern by setting a value of neurons to the desired pattern. Then its weights are computed. The weights are not changed. Once trained for one or more patterns, the network will converge to the learned patterns. It is different from other neural networks.

Boltzmann Machine Network — These networks are similar to Hopfield network except some neurons are input, while other are hidden in nature. The weights are initialized randomly and learn through back propagation algorithm.

Other types of Neural Network

Modular Neural Network — It is the combined structure of different types of the neural network like multilayer perceptron, Hopfield network, recurrent neural network etc which are incorporated as a single module into the network to perform independent subtask of whole complete neural networks.

Physical Neural Network — In this type of artificial neural network, electrically adjustable resistance material is used to emulate the function of synapse instead of software simulations performed in the neural network.

The neural network learns by adjusting its weights and bias (threshold) iteratively to yield desired output. These are also called free parameters. For learning to take place, the neural network is trained first. The training is performed using defined set of rules also known as the learning algorithm.

Gradient Descent — This is the simplest training algorithm used in case of supervised training model. In case, the actual output is different from target output, the difference or error is find out. The gradient descent algorithm changes the weights of the network in such a manner to minimize this error.

Back propagation — It is an extension of gradient based delta learning rule. Here, after finding an error (the difference between desired and target), the error is propagated backward from output layer to the input layer via hidden layer. It is used in case of multilayer neural network.

Types of Learning in Neural Network

Supervised Learning — In supervised learning, the training data is input to the network, and the desired output is known weights are adjusted until output yields desired value.

Unsupervised Learning — The input data is used to train the network whose output is known. The network classifies the input data and adjusts the weight by feature extraction in input data.

Reinforcement Learning — Here the value of the output is unknown, but the network provides the feedback whether the output is right or wrong. It is semi-supervised learning.

Offline Learning — The adjustment of the weight vector and threshold is done only after all the training set is presented to the network.it is also called batch learning.

Online Learning — The adjustment of the weight and threshold is done after presenting each training sample to the network.

Training set: A set of examples used for learning, that is to fit the parameters [i.e. weights] of the network. One Epoch comprises of one full training cycle on the training set.

Validation set: A set of examples used to tune the parameters [i.e. architecture] of the network. For example to choose the number of hidden units in a neural network.

Test set: A set of examples used only to assess the performance [generalization] of a fully specified network or to apply successfully in predicting output whose input is known.

How does Learning happen in Neural Network?

Learning occurs when the weights inside the network get updated after many iterations.

For example — Suppose we have inputs in the form of patterns for two different class of patterns — I & 0 as shown and b -bias and y as desired output.

We want to classify input patterns into either pattern ‘I’ & ‘O’.

Following are the steps performed:

So, these weights correspond to the learning ability of network to classify the input patterns successfully.

Following networks are used for clustering -

Pattern recognition is the study of how machines can observe the environment, learn to distinguish patterns of interest from their background, and make sound and reasonable decisions about the categories of the patterns.

Some examples of the pattern are — fingerprint image, a handwritten word, human face or speech signal.

Given an input pattern, its recognition involves the following task -

So, the recognition problem here is essentially classification or categorized task.

Related Stories
Subject Matter
Win $2000 by building a web app on Velo by Wix by @Wix
#promoted
How To Convert PDFs Into AudioBooks by @jitendraballa2015
#python3
Introducing Total Relighting by Google by @whatsai
#artificial-intelligence
In A World of Rigid Opinions and Rules, Be As Fluid As Water by @supersam
#cryptocurrency
Predictive Analytics for Maintenance Events by @47Billion
#predictive-analytics
Low-Code Development Helps Data Scientists Uncover Analytical Insights by @aditya-gairola
#low-code