My Weekend at Hack@Brown Changed My Life

Currently trying to figure out what I want to do in life but in any given moment whatever I'm doing, I'm happy

As I start to write this, I realised how hard it may be to describe the last twenty-four hours of Hack@Brown into a single sentence. If words can capture the sleepless Discord calls, the bittersweet taste of Red Bull, or the pain of using Android Studio, then these are words I don’t possess.

I guess if I had to write something for this post, it would be to start with my journey in tech: when I was younger, my exposure to tech was limited. I’d picture Steve Jobs, Bill Gates, and an army of detached robots ready to destroy the multiverse. Heck, I even used to think “hack” was a co

As I got older, I got this vague sense of how tech companies work, what they do, and how they create it. Still, had no idea what "hack" meant though. After one thousand four hundred and forty minutes — one weekend — of my life, it single-handedly transformed the way how I approached tech.

To “hack” is to work on a solution to a problem using a combination of design, creativity, tech and humanities. The virtual Hackathon at Brown enabled me to meet people, explore ideas, play with apps, struggle for six hours, learn about a concept, and leave virtually with a product that I never thought I could have made. Even though the Hackathon kickstarted at 12 in the morning (goddamnit timezones), I was energised and excited to learn, create and teach — it was a different kind of education.

I think one of the biggest takeaways for me is that, despite the tech inequalities defiantly portrayed on the media, it’s actually possible for me — someone who eyed being a lawyer for a long time, has no technical skills and lives criminally far away from Silicon Valley — can be in the tech world. I coded my first HTML website, learnt a bit about Machine Learning and designed an App with Figma all under twenty-four hours; how much more could I learn if I gave it a bit more time?

Maybe it’s just wishful thinking. Maybe I’m having my last laugh as I try to learn how to code more complex systems but hearing the story of Dylan Field (Figma’s CEO), virtually having coffee with Yamiley Joseph (Bloomberg’s Campus Recruiter), and working with extremely motivated students (who I later realised were from the Ivy Leagues — how scary .. jk ) then maaaybe getting into tech might be possible and worth it.

So, what did I make in Hack@Brown?

I was fortunate enough to be paired up with nice and knowledgeable people: Joe (Brown freshman who did the presentation and strategy), Skylar (Tufts freshman who coded the Google Maps integration), and Bhakti (UChicago freshman who heavy lifted the team through her Java skills)! We made an App that utilises Google Maps for social interactions called Peepl. 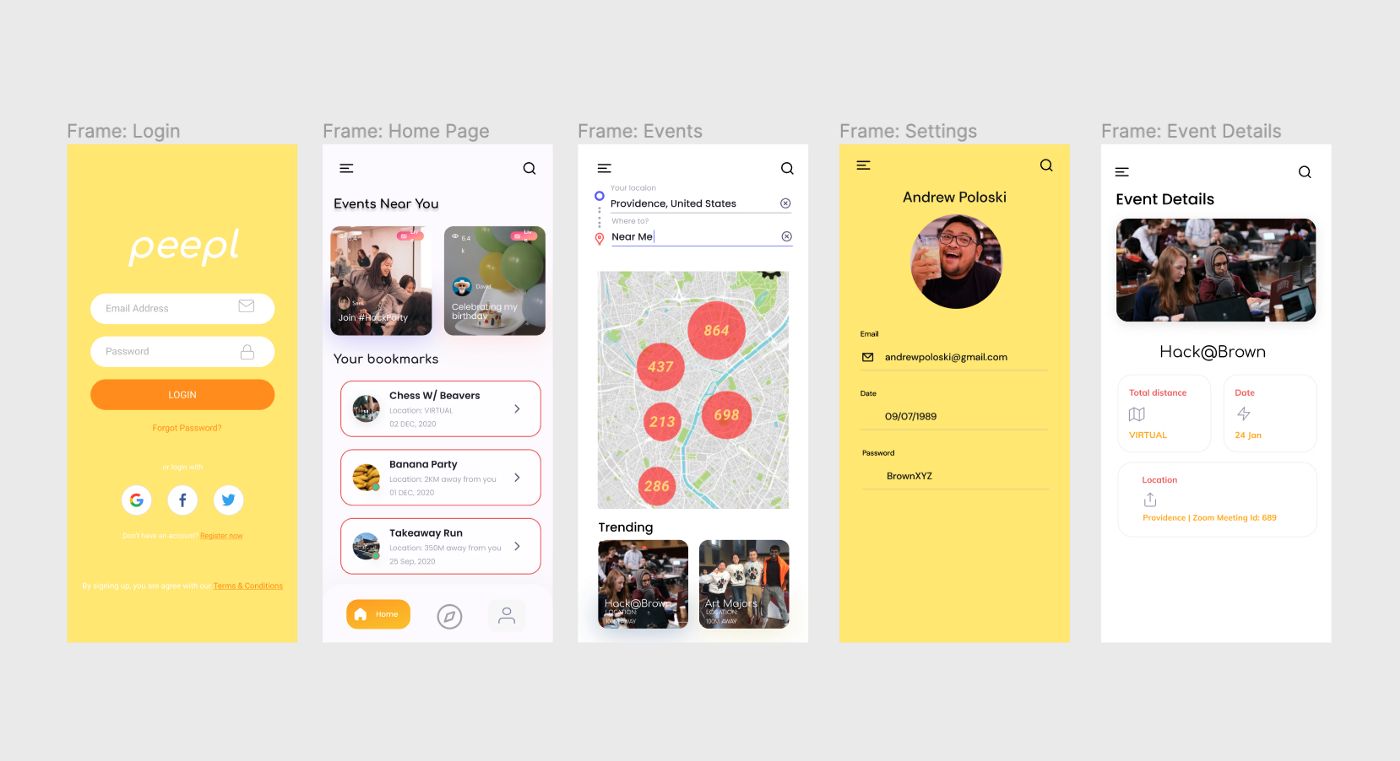 The spiel was: whether you’re new in town looking for the local scene or summer block parties, Peepl is your go-to app. It’s hard to find where the best areas are if you’re new in the area so the Peepl Map helps you to find where other users are hanging out. Pin temporary pictures, and events to the map for others to see.

We (more like Bhakti haha) used Java in Android Studio in order to easily deploy it on the Google Play Store with a Mapbox API to integrate the map feature into the App. We ran into multiple problems:

(1) one of our team members ghosted for almost the whole Hackathon so their contribution was minimal and we didn’t have enough manpower on the coding front which was a big big big setback.

(2) for the whole 24 hours, we were under the impression that the Figma designs can be easily transferable to working code on Android studio but we were very wrong.

(3) everything was done super last minute and we ended up with an App that has the very basic features that we originally planned (sign-in page and the map).

We were unable to demo the location cluster, search bar function or anonymity process onto our application. Despite this, I’m still pretty satisfied with the project. We submitted it nonetheless and I learnt some valuable lessons (#1: Act as a job recruiter during team formation. Be selective and make sure they have the skills!).

All in all, as someone with no CS background, was able to create tech products, watch others do the same and work with amazingly driven students side-by-side for twenty-four hours straight — I can say with sincere happiness that this was one of the greatest experiences of my life.

Related Stories
Subject Matter
Book a Demo. Ship Fast. Rest Easy. LaunchDarkly. by @LaunchDarkly
#promoted
The Facebook TransCoder Explained: Converting Coding Languages with AI by @whatsai
#artificial-intelligence
SPARQ Launches on App Store and Google Play by @sparq
#fintech
An Introduction to Guest Posting and Guest Blogging by @mwaleeds
#guest-post
CouchDB vs MariaDB- Which is better? by @techblog
#databases
Free Tools That Will Help You Grow As A Front-End Developer In 2021 by @RAHULISM
#javascript