Mind your Satoshis & your Bitcoin will be Worth Much More…

The title of this note updates an old proverb that Benjamin Franklin popularized, to make the point that Bitcoin (and other crypto)  investors should focus on efficient trading, since the small amounts they can save per trade will amount to a lot of money in the long run.

At CoinRoutes, which provides best execution solutions for crypto investors, we have been surprised by the lack of concern most people have for their trading costs.  The common belief, among the crypto community, is that the explosive upside of their investments means that paying too much or selling too low for crypto trades doesn’t really matter.

Unfortunately, the truth is the polar opposite; the more one believes that crypto will move higher, the more important controlling trading costs becomes. To understand why, consider the following simple model with both bullish and extremely bullish assumptions over the next 5 years:

Crypto will appreciate 25% per year on average (6.25% per quarter)Trading activities will add 0.5% per quarter to the overall return, net of costsTurnover will average 100% per quarter (4 times per year)Better trading will save 0.25% of costs (Based on CoinRoutes empirical results)

Crypto will appreciate 100% per year on average (25% per quarter)The funds trading activities will add 2% per quarter to the overall return, net of costsTurnover will average 300% per quarter (once per month)Better trading will save 0.25% of costs

Bullish — The performance gain from saving 25 basis points trading on a $10 million initial portfolio over five years would be $1,670,425

Extremely Bullish — The performance gain from saving 25 basis points trading on a $10 million initial portfolio is  $219,502,717

The reason for this, of course, is compounding.  This means that bitcoin/crypto bulls that are convinced that the price of such assets are going to go “to the moon”, should care a great deal about trading costs.  This may run contrary to the conventional wisdom, but it is so profound, that it bears emphasis:

Thus, the popular narrative that, because these assets are going to go up so much, investors should not care about “fractions of a percent” is wrong.  Sadly, it happens to be a very common perception among the crypto community.

Examples of excessive trading cost abound.  Many of us have been approached or seen stories of intermediaries charging multiple percentage points to “find liquidity” and seen hundreds of “OTC Traders” on Linkedin purporting to be able to buy at a discount to the market, for a fee.

At CoinRoutes, over the past couple of years, we have talked with miners, large potential investors and their “representatives” and many were insensitive to the price they traded at, nor considered the impact of their trading on the market.

As a result, we have seen many intra-day trading gaps likely caused by sloppy trading or “leaked” information.   Examples of this abound, but my personal favorite was this chart from this past April, when a large buyer entered the market sloppily, causing the market to gap higher, then retrace a bit, before levelling off.

Notice that, since Bitcoin is now roughly double the price than it was at that time, that the buyer probably thinks they are pretty smart. I would agree that their trading call was brilliant, but their method cost them a couple of hundred dollars per bitcoin…

Retail traders often ignore trading costs also, with most of the platforms designed for their use lacking comparison pricing or embedding large bid/offer spreads in their models.  Even professional institutional traders often fail to focus on their trading costs, by over-reliance upon either OTC or individual exchanges.

This is not to say that OTC trading is always the wrong approach, in fact, for those who need an immediate execution, OTC desks that offer executable quotes provide a valuable service.   For those with a bit more flexibility, however, the spreads offered by OTC brokers are, on average, wider than can be achieved via algorithmic trading.

This stands to reason as the most sophisticated OTC brokers use algorithms to trade out of positions and expect to earn a margin on their trading.

It is important to note, however, that asking for quotes from multiple OTC brokers, particularly those who are pure intermediaries, is almost always a bad idea.   At best, it delays the investors ability to access liquidity, but, at worst, allows some of the brokers to run in front of the potential order.

This could create market impact before the investor can trade, and is a likely cause of chart patterns such as seen above.

In addition to OTC trading, there are many institutional traders still working orders manually on individual exchanges.  As a group, regulated exchanges provide excellent liquidity, but there is often both dispersion among the prices upon various exchanges, and significant rotation between those exchanges.

As the following graphic, which depicts statistics from the Bitcoin-US dollar pair for the day that I wrote the majority of this note, shows, there is significant rotation among exchanges for which is the best offer or bid at any point in time: 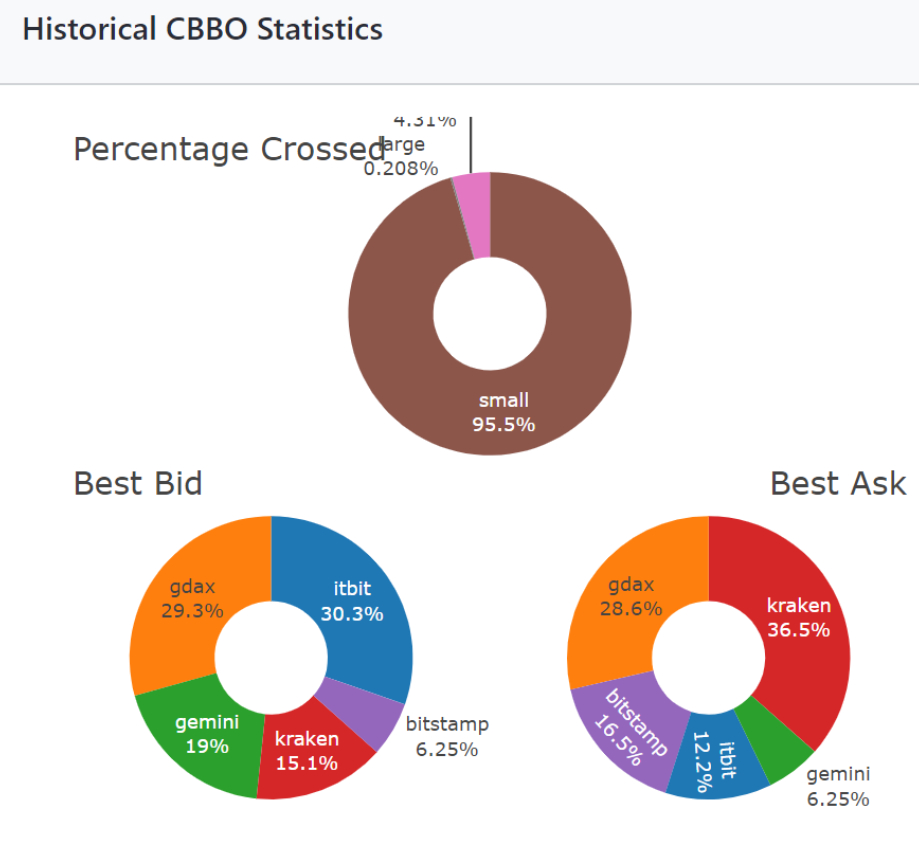 As a result, quite often, trading on one exchange at a time could be at inferior prices, particularly when traders take liquidity, paying the (often) higher fee for doing so.  On the other hand, algorithms can determine the optimal price to place limit orders even when trading on a single exchange.

To put this in perspective, compared to optimal order routing (meaning a theoretical “best” price based on removing liquidity from the exchanges with the best net price overall), CoinRoutes algorithms outperformed by roughly 25 basis points, net of all fees.

This result was based on over $160 million of traded value of a mix of Bitcoin and Ethereum. (This is why we used 25 basis points in the model shown earlier) It is worth noting, that the optimal routing used as a benchmark, as calculated by the CoinRoutes Cost Calculator, often compares quite favorably to OTC quotes. (Not always, of course, but it shows that it is not an easy benchmark to outperform)

In conclusion, while we would never suggest that any one trading approach is always the best, controlling ones trading cost is vital.  Critically, keeping trading costs low becomes more important the more explosive the potential for asset appreciation is.

While this is counter-intuitive to many, and clearly not the popular sentiment, the numbers don’t lie.  Due to the effect of compounding, saving a little money now, will amount to a lot of money later.

Does Bitcoin NEED an Index?