Liquidity aggregation and farming on blockchain with Alexey Koloskov 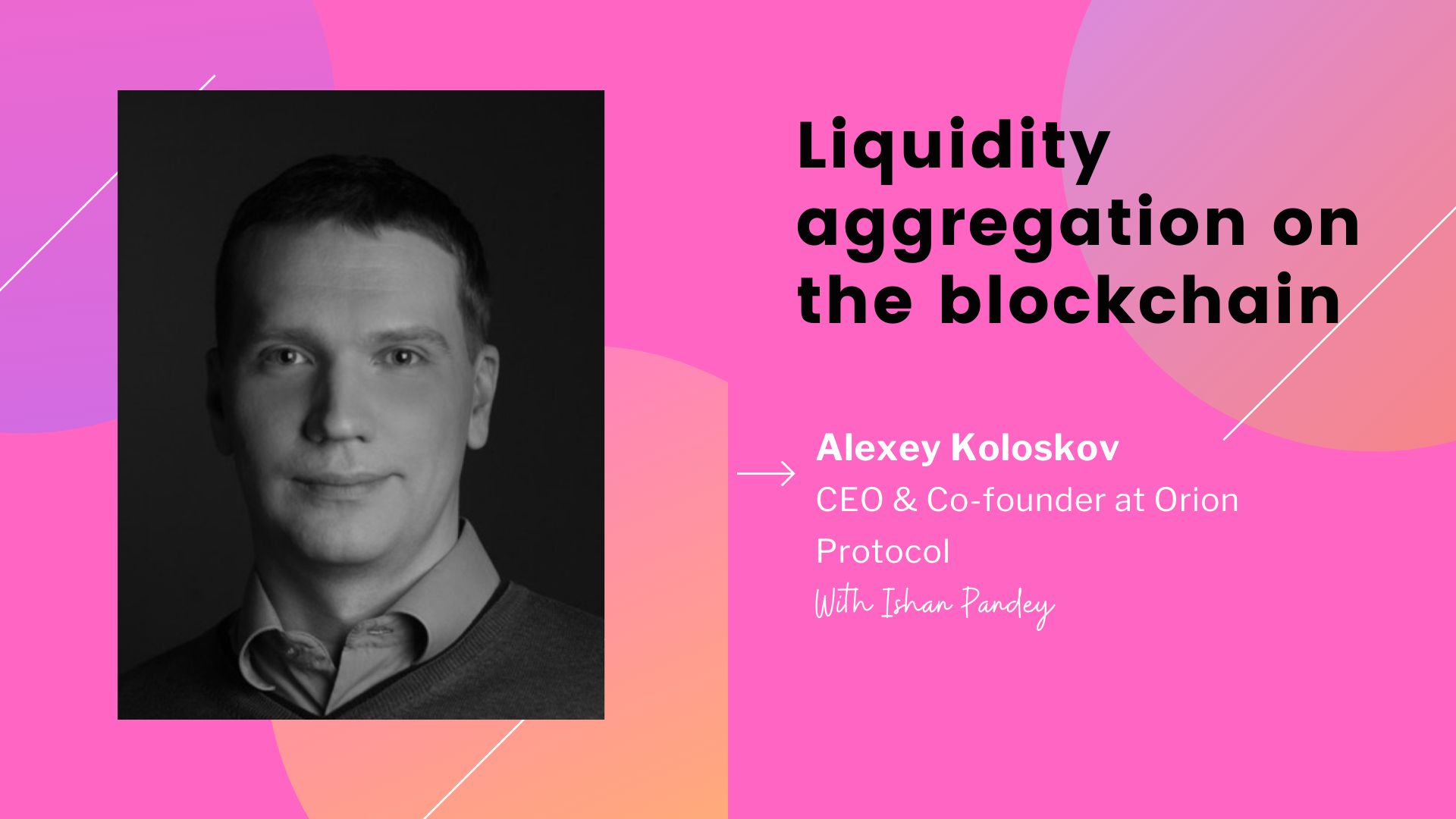 Student of law working on code and everything law. Founder: Blockchain Research

As the DeFi market heats up with a focus on liquidity farming, I sat down with Alexey Koloskov, CEO and Co-founder at Orion Protocol to talk about liquidty farming and liquidity aggregation in DeFi.

Ishan Pandey: Hi Alexy, welcome to our series “Behind the Startup.” Please tell us about yourself and the story behind Orion Protocol?

Alexey Koloskov: I’m Orion Protocol’s CEO and Co-Founder, and my background spans the two worlds of traditional finance and DeFi. I started my journey in the crypto space in 2016 as Chief Architect and Creator of the Waves DEX - the most successful decentralized exchange to date. Before this, I spent years creating software for some of the largest international banks, including Deutsche Bank and UniCredit.

Ishan Pandey: Investors are generally very sceptical of leaving their money locked up in smart contracts, at an arm’s distance from hacker’s reach. According to you, what are the best practices when it comes to cybersecurity in smart contracts and decentralized finance products?

Alexey Koloskov: Investors should always approach the storage of their assets with scepticism and vigilance, given the unfortunate prevalence of hacks, data breaches, and malpractice across the industry. We believe traders shouldn’t have to part with, and therefore risk, their assets to trade. On Orion terminal, traders can execute trades directly from their wallet, across any exchange, without the need to open any exchange accounts.

This is all made possible through our governance mechanism, Delegated Proof of Broker. Brokers with exchange accounts (or exchanges themselves) who carry out KYC on traders behalf, execute trades routed via Orion’s liquidity aggregator.

Before executing any trades on Orion Terminal, orders are stored privately in Orion’s Matching Engine. When a trader signs an order, it’s a commitment to exchange assets at the specific terms included in the order - these parameters are signed in the order message and cannot be changed by any parties. Only if a selected broker fills the order will the transfer of assets occur atomically within the smart contract and the buy assets are released to the trader’s wallet. Only when a broker fully settles the order is the transaction submitted to the blockchain.

The exact amounts of exchanged assets are strongly enforced by the order’s conditions and cannot be altered by the broker. Brokers never get access to traders’ accounts or funds as the terminal is governed by smart contracts to enforce the token exchange’s secure conditions. Meanwhile, traders’ assets are protected by broker collateral held during the brokers’ tenure. If malicious activity is seen from brokers, they will lose their collateral and be banned from the brokerage, while the collateral will reimburse traders.

Additionally, our smart contracts are continually audited by leading blockchain security firm Certik. The audit includes VAPT of the smart contracts and Substrate modules involved in the development.

Alexey Koloskov: While the influx of capital into the crypto space has been significant in recent years, mainstream adoption is yet to occur. There are tens of thousands of tokens spread across hundreds of exchanges with different interfaces, fees, and processes, and the landscape is understandably daunting for newcomers to space.

To us, fragmentation, centralization, and liquidity are the most significant issues in the space and the most considerable barriers to the industry’s widespread adoption. Fragmentation of liquidity has undoubtedly started to wear thin on traders, increasingly frustrated with high spread, high slippage, lack of trading pairs, and the need for multiple accounts on different exchanges. With crypto described as “nothing more than a fight for liquidity”, I believe the future lies in the industry’s aggregation in its entirety. CEX aggregators and DEX aggregators have grown in popularity, but no entity has transcended the two to aggregate the entire crypto market into one platform, until now.

Ishan Pandey: Can you explain what liquidity mining is? It’s advantages and risks associated with it?

Alexey Koloskov: Liquidity mining is a network participation strategy in which a user provides capital to a protocol in return for their native token. Participants deposit their tokens to a liquidity pool. They are rewarded for providing liquidity, allowing them to generate passive income based on the share of commission, price spread, and the orders’ lifetime. While it will enable traders to earn rewards passively and receive income higher than the interest on deposits and even some PoS-staking, it comes with risks not found in other mining forms.

Impermanent loss (IL) occurs when the rate of one of the provided assets is unstable. The Liquidity Provider (LP) must provide the pair (e.g. ORN/ETH) in the correct ratio (50/50). Suppose this equilibrium is broken because of the increase in the price of one of the assets on third-party platforms. In that case, arbitrators use this opportunity to buy cheaper assets to make a profit.

For example, if the arbitrator buys 1.03 ETH for the USDT value of 1 ETH and instantly sells for USDT, the arbitrator’s profit will be taken away from the LP.  However, this loss is only theoretical until the liquidity provider withdraws their tokens, hence impermanent. The loss is reset when the price returns to previous levels, or the alternate asset increases too. Equally, high APYs can often offset any loss from IL.

The protocol recently launched a liquidity mining program on Uniswap, rewarding ORN LPs with up to 150,000 ORN per month for ORN/ETH. This reward amount will be distributed proportionally to the amount of liquidity each person provides. The current APR at the time of writing is 136%, with over $4.6 million staked.

The liquidity mining program, alongside our centralized exchange pre-staking initiative, is in place until main net staking is live on Orion Terminal’s full launch early Q1. Delegated Proof of Broker is built on a network of brokers and stakers fulfilling every function on the protocol with our native ORN token at its core. Brokers with exchange accounts (or exchanges themselves, such as BitMEX, KuCoin, MXC, and Injective) run Orion Broker Software, automatically executing trades routed from the liquidity aggregator how much ORN they stake and receive a portion of fees from each trade they execute. Non-broker stakers stake ORN to ‘vote’ for their choice of broker based on the variable benefit share offered by the broker. This will allow brokers and stakers to generate passive income.

Furthermore, the protocol is currently developing a solution to IL’s risks by building the world’s largest liquidity pool, composed of assets from all major third-party wallets. For the first time, token holders will be able to monetize their idle assets in their crypto wallet of choice by using those assets to provide liquidity within Orion Liquidity Pool from Q2 of next year.

Ishan Pandey: What are your views on the current state of interoperability between blockchains and how the gap can be bridged?

Alexey Koloskov: Today, there is one thing that distinguishes traditional finance systems from the world of crypto: advanced interoperability. Cardholders can make payments globally without worrying about compatibility and conversion, while this remains an issue in the crypto space. As a result, interoperability has become a buzzword in the space in the same way DeFi did. Fragmentation is a critical issue in the space, and this goes beyond the fragmentation of liquidity across exchanges through to the lack of interoperability between blockchains themselves. Although cross-chain systems are gaining traction, I believe the industry is currently too siloed to evolve to a full-interoperability state without a solution that sits across the entire market.

Following wBTC and renBTC, we have built oBTC to facilitate seamless cross-chain trading on Orion Terminal. While we are currently building on Ethereum and Elrond, Orion terminal is chain agnostic to be flexible with our needs. Our cross-chain trading is performed via proxy tokens issued on the master blockchains (Ethereum and Elrond). These proxy tokens are pegged 1:1 to the native currencies swapped to native tokens via token bridges via atomic swaps, in a trustless and decentralized way.

Ishan Pandey: According to you, what new trends are we going to see for 2021?

Alexey Koloskov: The way we invest in assets is on the cusp of fundamental change. Tokenization, or the act of issuing a blockchain token that digitally represents real, tradable assets, means that security tokens can be used to describe shares in a company, a piece of real estate, a painting, or even a t-shirt.

Tokenization as an extension of blockchain represents a remarkable power shift of asset ownership: from large centralized entities to the individual. Adopting on a mass scale will allow for creating a new financial system - one that is more democratic, more efficient, and faster than what we’ve ever seen.

Tokenization will disrupt the finance sector and the mass of interlinked industries through the transactions at the core of exchanging their respective products, and I expect to see this come to the fore in 2021. The advantages of this most imminently apply to asset classes that are typically considered illiquid. Still, in a tokenized future we’ll see the fundamentals and benefits of blockchain brought to real-world assets en masse: greater transparency, faster and cheaper transactions, increased accessibility, and greater liquidity, as these real-world tokens can then be traded on a secondary market.

By solving the industry’s fragmentation, Orion Protocol has become the first platform between the end-user and the entire crypto market. In doing so, we’ve built the foundation for bridging the worlds of crypto, traditional finance, and real-world assets. Only through bridging the gap between these worlds will we achieve real steps towards change building the foundations for a tokenized future, accessible, secure, and compliant, to create a truly decentralized future of finance.

The purpose of this article is to remove informational asymmetry existing today in our digital markets by performing due diligence by asking the right questions and equipping readers with better opinions to make informed decisions. The material does not constitute any investment, financial, or legal advice. Please do your research before investing in any digital assets or tokens, etc. The writer does not have any vested interest in the company. Interviewer - Ishan Pandey.

Related Stories
Subject Matter
Book a Demo. Ship Fast. Rest Easy. LaunchDarkly. by @LaunchDarkly
#promoted
Building A Secure Data Economy: An Interview with Ocean Protocol's Founder Bruce Pon by @Ishan Pandey
#blockchain
UX and Literacy Issues Are Keeping Most Potential Investors Away from #DeFi by @adriankrionofspielworks
#defi
Can Alternative Blockchains Save the DeFi Market? by @ks.shilov
#defi
All The Differences Between Forex Trading and Crypto-Trading by @ks.shilov
#defi
Will Casper Network Boost Ethereum Before ETH2.0 Goes Live? by @anton-dzyatkovskii
#blockchain
Read This Before Starting A Crypto-Business by @ks.shilov
#crypto