#Learn2Trade Crypto - What Is a MACD Indicator and How To Use It Correctly? 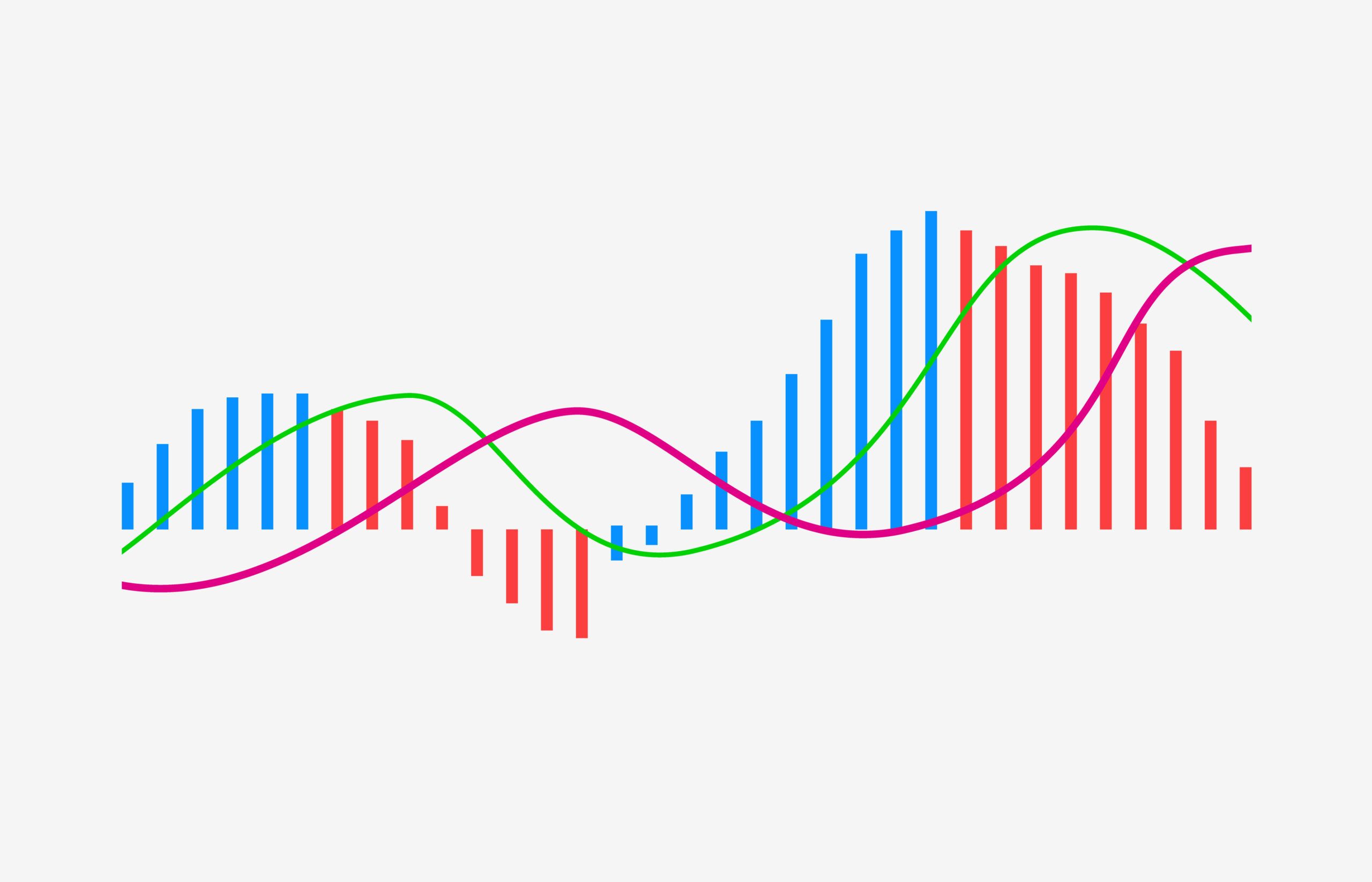 Bybit is one of the fastest growing cryptocurrency derivatives exchanges, with more than a million registered users.

Moving average convergence divergence indicator (MACD) refers to a momentum oscillator used for a trend following trading strategy. There are two lines, a MACD line and a signal line. When the MACD line crosses above the signal line, MACD is signaling a bullish trend.

The MACD line is calculated by subtracting the 26-period EMA (exponential moving average) from the 12-period EMA. The signal line, on the other hand, is just a 9 period EMA line.

While most technical indicators only provide a single piece of information about historical price data, the MACD indicator is a versatile 2-in-1 indicator that gauges trend direction and the strength of a trend at the same time.

In this article, we will study the MACD indicator in detail and share some advice on how MACD can be used in cryptocurrency trading and how to identify potential MACD buy and sell signals.

Invented by Gerald Appel 1979, MACD can help investors calculate the direction, length, strength and momentum of a given asset’s price.

MACD is a trend-following momentum indicator that is part of the oscillator family of technical indicators. It allows you to:

To understand what MACD is and how it works, we need to learn the meaning of the moving average (MA) first. When talking about cryptocurrency price movements, MA represents the line on a graph that shows the average value of data collected over a defined period of time.

Traders categorize MAs into two key types: simple moving averages (SMAs) that process all input data equally, and exponential moving averages (EMAs) that grant more weight to the recent data. MACD relies on the latter, as they provide data that is more relevant for making decisions whether it’s worth buying or selling the asset.

Perhaps the best characteristic of the MACD indicator is its simplicity, as the signals it provides are obvious even to total newbies.

However, it’s worth remembering that one should never make a decision to buy or sell some specific coin by relying solely on one signal. MACD can be a great addition to other trading signals such as Stochastic or RSI indicators. Some details about RSI will be given later in this guide.

2. The Signal Line — the slowest moving average (long-term EMA)
This is a 9-day line designed to show the turns of the price action, usually painted in red.
Signal Line = 9-day EMA of MACD Line

3. The MACD Histogram — fluctuates above and below a zero line, which helps to identify bullish and bearish momentum readings
The histogram is the difference between the first two elements (MACD line minus signal line). When MACD is above the signal line, the histogram is positive, and vice versa. 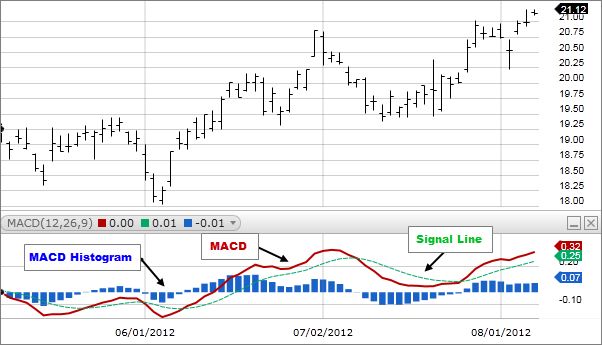 Thus, in order to read the signal correctly, one should check the following:

In the next section, we will provide a more detailed explanation of how to read the MACD signals.

How to Interpret MACD Signals

Let’s take a closer look at how you can spot potential buy and sell MACD signals.

This is the most basic signal that you can take advantage of. As stated above, the signal line shows the moving average (MA) of the MACD line. This is why it always lags behind. The obvious crossovers of these two lines signify potentially strong movements. The position of these lines shows whether a crossover is bullish or bearish:

To strengthen the signal further, look out for the general trend. If it corresponds with the crossover, the reliability of this signal will be higher. 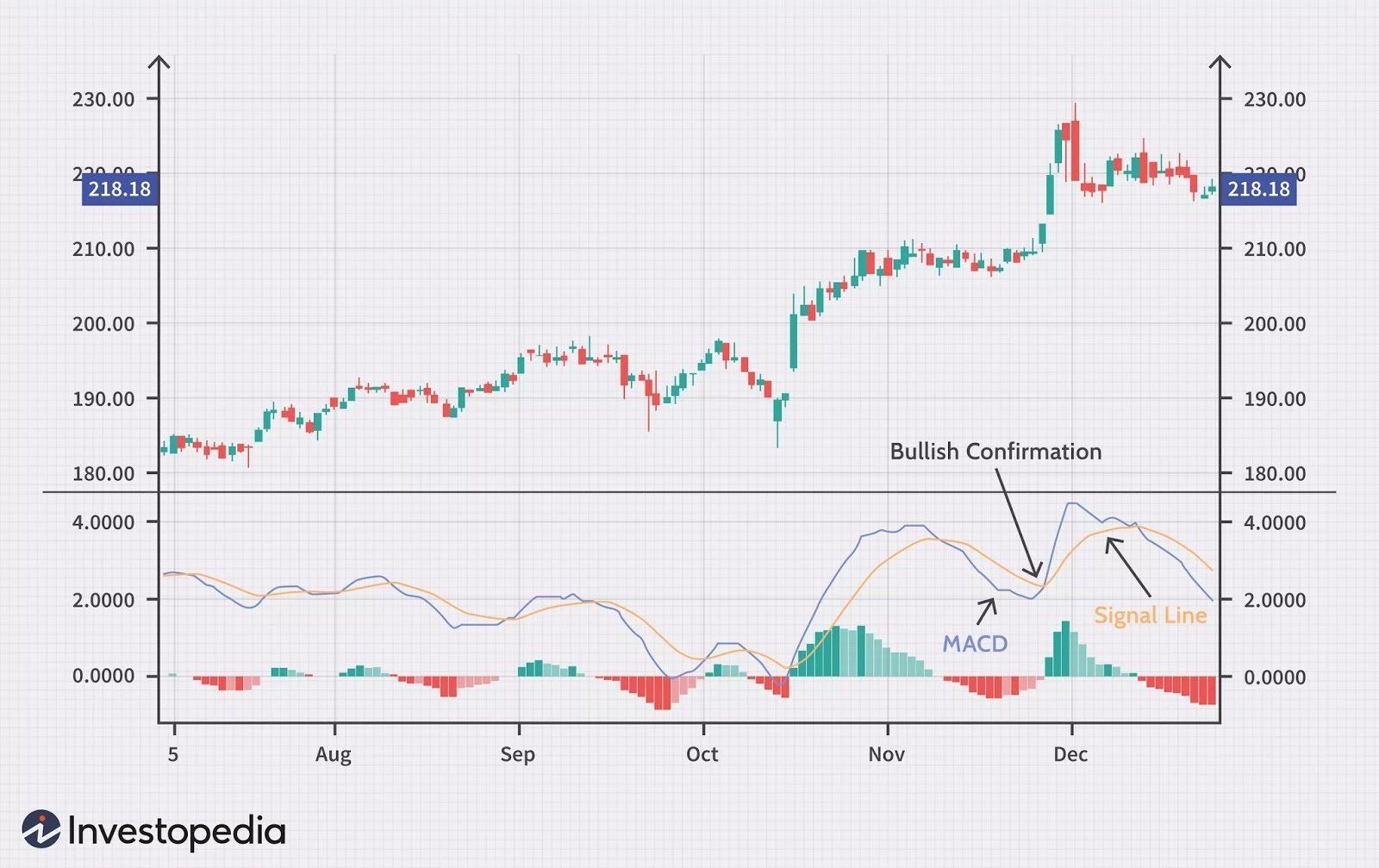 This signal is similar to the previous one. The difference is that the MACD line crosses the zero level, instead of the signal line. When it turns positive, it signifies a bullish trend. And vice versa: when crossing the zero line in the downwards direction and becoming negative, MACD points to a bearish trend.

Note: The further away from the zero line, the stronger the trend becomes. 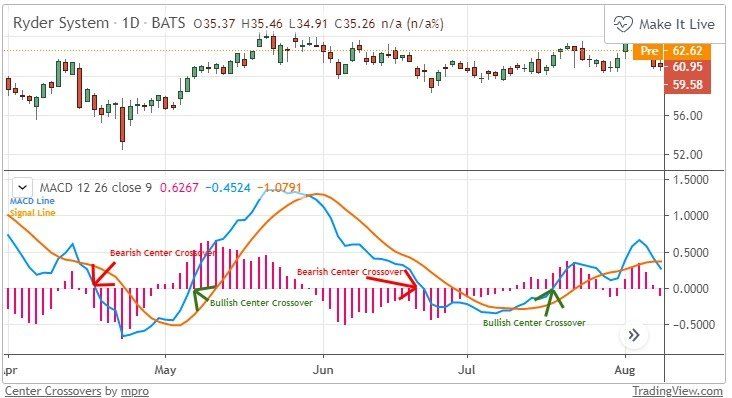 What is MACD Divergence?

When trading cryptocurrencies, we can distinguish two types of divergences: 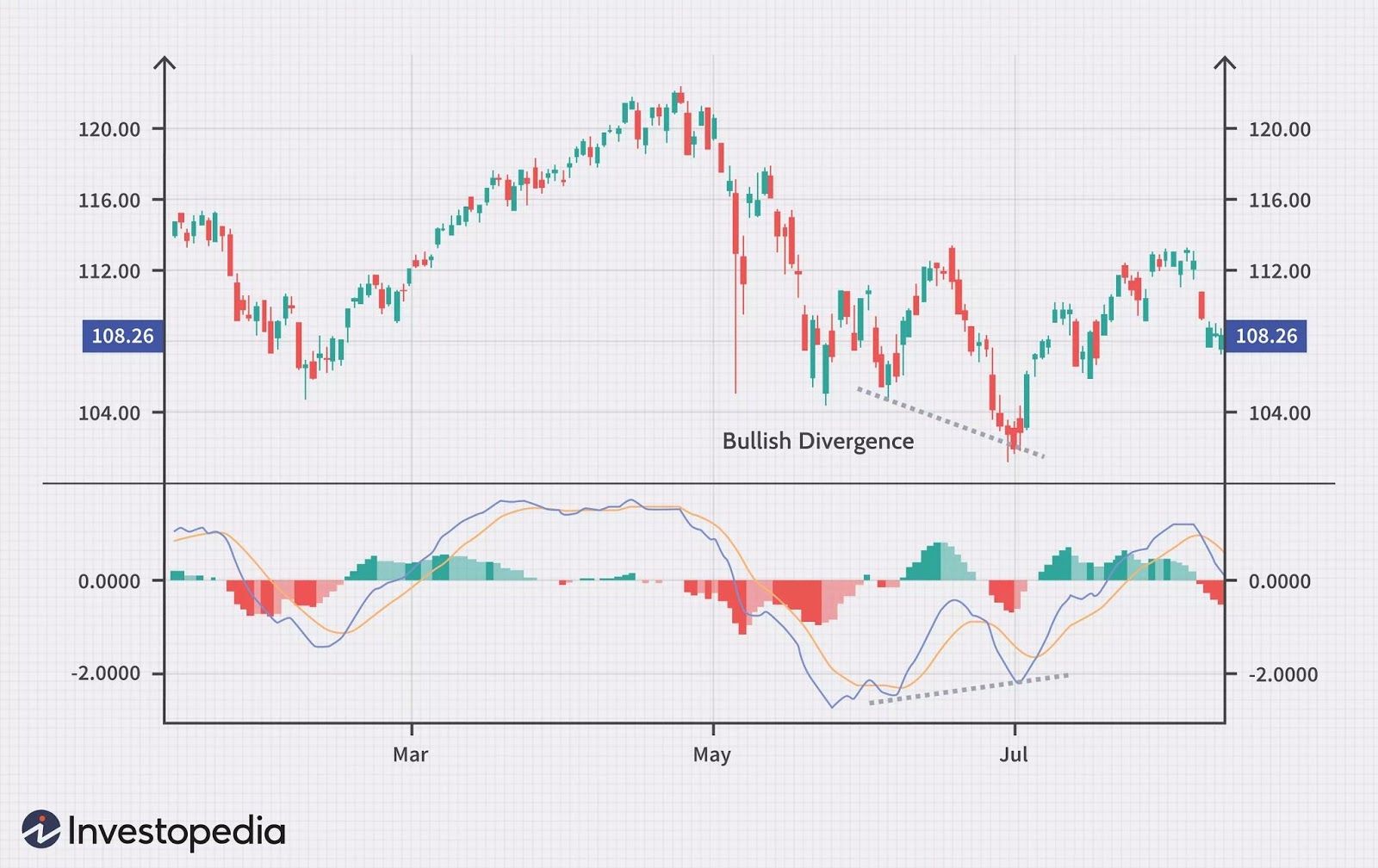 If the long-term trend is bullish, the MACD bullish divergences may also be a good sign, as they point to a potential trend reversal. However, in such a situation this signal is not so strong and should always be considered in combination with other factors, and vice versa.

One more signal that you can take advantage of, with the help of the MACD indicator, is how fast the MACD lines rise or fall. This happens when the short-term EMA rises or falls faster than the long-term EMA. On the price chart, this can easily be recognized by measuring the distance between the two MACD moving averages. This signifies that the asset is oversold or overbought, and that its price is soon going to return to its normal state.

Note: The bigger the space between two MACD moving averages, the more oversold or overbought a cryptocurrency is. 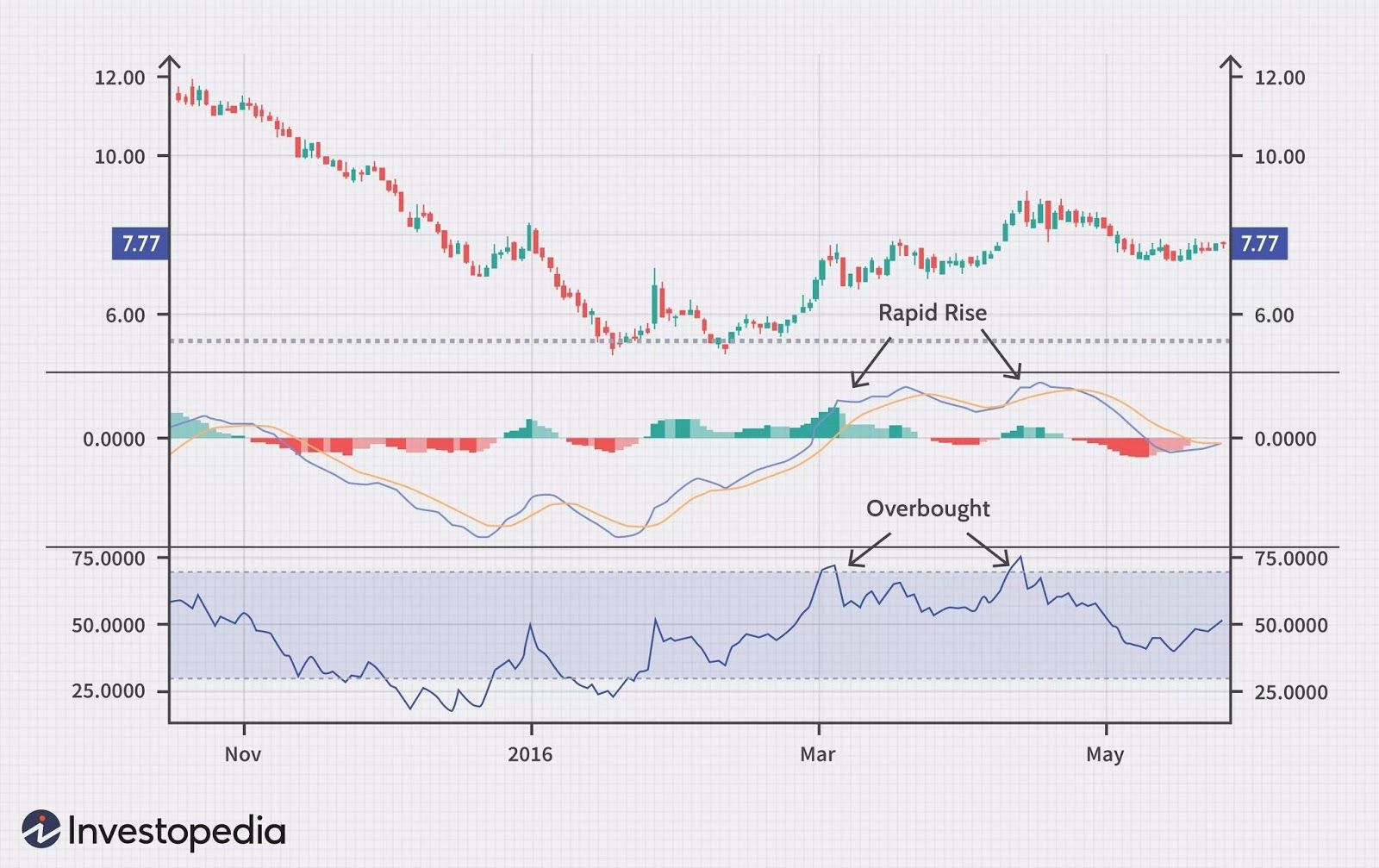 The most popular set of parameters used for setting up the MACD indicator is as follows:

If you use MACD for long-term trades, consider setting up the following rules:

For short-term day trading, the setting should be as follows:

Sophisticated traders create their own patterns, based on their individual experiences. For instance, another popular set of parameters for MACD is 5, 35, and 5-period EMA, which is combined with weekly or monthly time frames. However, the high level of volatility in the cryptocurrency market makes the process much riskier. Thus, for newbies, sticking to the default parameters is recommended .

It’s important to say that MACD by itself can by no means be considered a magical pill to boost your profits — and it is surely an unreliable source of making decisions when treated outside of the general market context. It may often allure traders with false signals of a trend reversal.

For example, MACD may often cross above the signal line and point to a bullish crossover, while the asset price moves downward. Such a signal is referred to as “false positive.” In the same way, when MACD points to a bearish crossover while the price is still increasing, the signal is deemed a “false negative.”

In order not to fall into this trap, traders should always look out for other confluence signals. Ideally, at least three different signals should coincide and be followed by corresponding news or rumors. Then, you may buy or sell a selected crypto asset with higher confidence.

Another indicator that traders often use to enhance their strategies is the Relative Strength Index indicator, or RSI for short. Both MACD and RSI help to evaluate the momentum of the market and its overall direction, but they work with slightly different aspects.

While MACD evaluates the difference between two EMAs, RSI serves to measure the price changes compared to the recent highest and lowest positions. Note that since these two indicators focus on different factors, the “buy” and “sell” signals that they produce may sometimes be the opposite of each other.

MACD is a great tool for any trader, thanks to its simplicity and accuracy, as it puts together the momentum of the market and its trend into one indicator. As an all-in-one indicator, the MACD indicator allows for a less cluttered chart and provides a much better view of the price action. Always look out for other signals and never make your trading decisions while relying solely on the MACD signals.

This article is intended for and only to be used for reference purposes only. No such information provided through Bybit constitutes advice or a recommendation that any investment or trading strategy is suitable for any specific person. These forecasts are based on industry trends, circumstances involving clients, and other factors, and they involve risks, variables, and uncertainties. There is no guarantee presented or implied as to the accuracy of specific forecasts, projections, or predictive statements contained herein. Users of this article agree that Bybit does not take responsibility for any of your investment decisions. Please seek professional advice before trading.