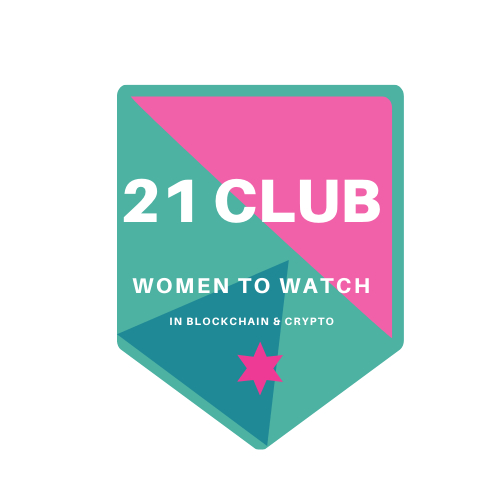 2020 is set to be a promising year for blockchain and crypto as the sector continues to mature. Since the 2017 cycle of interest and awareness that the jump in bitcoin price attracted, and the subsequent fall away of those who weren’t serious about what blockchain technology can deliver.

We’ve seen others steadily hold their vision and continue to build their companies and projects and lay down the rails for blockchain and crypto to continue to develop.

In a statement provided to Forbes by the secretary-general’s office last month, Guterres touted the technology  as a crucial component of the organisation that generates $50 billion in revenue annually. Enterprise blockchain and start ups have worked hard during the ‘Winter’ of crypto and 2020 looks set to be a blossoming Spring.

We celebrate the women leading the way in blockchain and crypto across all disciplines. As part of our mission to raise the visibility of the great work these women are doing we’re delighted to publish our 21 Women to Watch for the first quarter of 2020.

Dr Jemma Green is Co-Founder and Executive Chairman at Power Ledger, a technology company that uses blockchain and AI to enable the transition to low cost, low carbon and resilient distributed energy markets. Power Ledger has had a busy year, as they say, democratising the global energy market. They’ve announced 15 new projects across four continents and showcased their energy trading technology to the US Congressional #Blockchain Caucus at Capitol Hill.

JoJo Hubbard gained an interest in the renewable energy story that started in 2009 and led straight into renewable energy asset financing. From very early on she wanted to help solve the energy trillema which said that energy could either be cheap, green, or secure. This led JoJo to McKinsey to do an energy digital transformation where she saw the need for a market-based, decentralised co-ordination of all the assets and capabilities in the energy system. JoJo is Co-Founder and CEO at Electron a London based EnTech company designing and building the digital infrastructure that will enable the transition to cheaper, cleaner power.

Dr Jane Thomason is the CEO of Fintech Worldwide, The World’s Leading Network for Fintech, Blockchain and Digital Impact. She has been recognised in Forbes Magazine (2018) as Blockchain’s Leading Social Development Evangelist and is the Lead author of “Blockchain Technologies for Global Social Change” IGI Global 2019. Dr Jane is an advocate for social impact and is focussed on catalysing ESG investments in emerging economies and enabling Frontier Technologies to accelerate achievement of Sustainable Development Goals (SDGs). Dr Jane believes that the next wave of transformational innovation will be from emerging economies and this will have the potential to transform economies and attainment of SDGs.

Jessica Camus is Head of Partnerships and Impact at Diginex, based in Geneva. Jessica helps organisations to strategically address social and sustainability risks and opportunities for value creation through the lens of blockchain technology, impact investments and sustainable supply chains. Currently she works across public and private sectors to enable purpose-driven blockchain solutions at scale.

Georgie Benardete is a technology investor and entrepreneur and the co-founder and CEO of Align17. Keenly aware of the UN Sustainable Development Goals, Benardete believes that private wealth holds the key for impact financing to scale. By creating the most relevant digital destination for private investors to source vetted, impactful deals, Align17 believe they will accelerate the positive effect of finance in the world.

Linda Leaney is a highly experienced Investment Banking professional, with over 18 years at Tier 1 Houses. She is involved in harnessing traditional risk management techniques to new technologies, and new opportunities. She’s the CFO at Globcoin. A company ready to bring stablecoins to the next level, and the currency of the global village to the biggest possible audience.

Veronica Mihai has over 15 years experience in management consulting for enterprise programmes in non-profit organisations, private corporations and public sector in the UK and Europe. Veronica now concentrates her skills and knowledge in the Blockchain space and is Partner and Head of Investor Relations and Compliance Officer at Bloomwater Capital. She invests in blockchain and women-led start-ups and owned an enterprise grade cryptocurrency mining farm. She’s also a great supporter of women in blockhain, an advisor and mentor.

Iman Mutlaq is currently working with public, private and international organisations in a venture to create the first Blockchain based ecosystem in the MENA region. This Ecosystem is built on three pillars, [INGOT Academia] [ICO Factory] and their main project [INGOT Exchange].  She’s also the first instructor for the art of living foundation in Jordan, an educational and humanitarian movement engaged in stress-management and service initiatives, launched by Sri Sri Ravi Shankar, which promotes peace and development.

Phu Styles is the Founder of Women in Blockchain Foundation, CEO of Blockchain PR, Co-Founder of Startup Villas, and a Venture Partner. She is also an Advisor for several companies including Serve, Vezt, Snowball, HK EOS, & Blockchain at the University of California, Irvine. In 2017, Phu was awarded the Female Founder Fellowship from Founder Institute and founded an Augmented Reality startup before joining the Blockchain & AI revolution.

Linda Goetze is President and CEO of Blockchain Chamber of Commerce. For Linda educating about cutting-edge technology brings her joy. If you haven’t heard of (or just don’t understand) exogenous ketones, electrolyzed-reduced water, or distributed ledger technology (DLT), she’d love to point you to powerful resources that could be life-changing. Linda also has personal experience with Bitcoin and Blockchain since 2012 which she uses to lend her perspective as she helps individuals and businesses enter the Crypto Age with confident caution.

Eva Kaili is a member of the European Parliament (EP). She is a staunch advocate for digital transformation and believes digital assets and the distributed ledger technology (DLT) that underpins them are not going away. She’s Co-Founder of the World Future Foundation, which is a lab for policy makers, scientists and leaders who experiment with disruptive ideas & exponential technologies.

Cindy Chin co-founded and co-organised the WOTB conference. She is CEO of CLC Advisors, LLC, an advisory firm that focuses on frontier technologies which includes artificial intelligence, machine learning, and blockchain. As a member of NASA’s Women in Data innovation program she firmly believes the advancement of technology will only be successful if approached responsibly on a human level incorporating diversity and inclusion.

Prof. Sally Eaves has been described as the ‘torchbearer for ethical tech’. She is an international advocate for opening access to opportunity and has founded Aspirational Futures to help skill, empower and support the generation of interdisciplinary talent into careers yet to be conceived, alongside scaling the application of emergent technology as an enabler for business transformation and social good. Sally is also the Social Impact lead for the UK Government Blockchain Association and contributes to parliamentary policy thought leadership.

Genevieve Leveille originally from Haiti, is the principal founder and CEO of AgriLedger. She has more than 25 years’ experience dealing with large corporations and banks in financial supply chain optimization. Her background is in corporate and institutional banking. With a reputation for the delivery of disruptive technologies in large-scale projects, Genevieve is recognized as an authority in the realm of digital identity and financial transformation. Exploring the powers of distributed ledger technologies (DLT) for over three years, her work in the financial inclusion for Africa with her previous employer, the global bank consortium IdenTrust, is well known.

Isabella Brom a solution architect and manager with international background. Isabella combines experience in IT architecture and business advisory in financial services, applied blockchain and DLT in insurance and treasury, blockchain and database technologies. Isabella worked with Fortune 500 companies on digital transformation projects and was key to building and leading EY Switzerland’s Blockchain Technologies Advisory.

Alexandra Levin Esq is a partner and founding chair of the Blockchain Technology & Digital Currency practice at YK Law LLP. A U.S. law firm in association with one of China’s leading law firms, Yingke International. She’s also Co-Founder and CEO of Womin.io, a decentralised employment marketplace powered by blockchain that provides a platform for employers and freelancers (Smart ContractorsTM) to engage directly on a peer to peer basis, meeting the needs of both in a growing freelancer economy. She is also the Co-Founder of the WOTB conference.

Ash Costello is a Privacy Lawyer with her own consultancy in New York/London/Dublin, and is the former Global Head of Legal of MUFG Investor Services (a division of Mitsubishi Bank).  She has spent 2019 focusing on advising blockchain entities on how they can comply with the different privacy & data protection law challenges which are arising globally, and has spoken at numerous events including at New York’s Columbia University.

Jillian Godsil has held senior positions with global PR companies in Sydney, Singapore, London and Dublin. She was PRO of Iona Technologies (Ireland’s first company to float on NASDAQ). She changed the law in Ireland in 2014 and is a former European Parliamentary candidate (as an independent). She is a co founder and journalist in the Blockleaders.io and named as none of the top 100 Blockchain leaders globally by Lattice80.

If you know or indeed are a woman in blockchain please come and tell us so we can feature you or your friends. We need to be the change we want to see in the world.