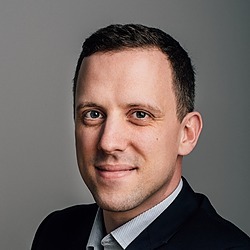 (Will biological ‘wet-ware’ always have a place in the economy?)
The future economy will be barely recognisable to humans. Investment and economic decision-making, far from being under our control, will be so advanced in sophistication that human minds will be relegated to mere passengers in a cambrian explosion of novel, automated methods and financial forces. It will be difficult to even grasp the rules of the game. And behind everything, driving a paradigm shift unmatched in its breathtaking speed, will be legions of autonomous programs; evolving, transacting and traversing across a universe of Blockchains.

Ok, so back down to earth for a second. That’s very different to what the economy looks like now. While today’s user interfaces are certainly improving, investing and transacting is still a very human and manual system. It still takes the same length of time to open a bank account as it did a century ago, and I still make some payments today that would arrive faster if I delivered a bag of cash by horseback. Nothing really happens without real people making instructions, checking instructions, approving and processing instructions, and then waiting…
In this context, my above vision of an unrecognisable automated economy seems a long way off, but I think it’s closer than most believe. Exponential take-off is often hard to spot in the moment, even if we’ve seen it happen before..

According to a Cisco study, the collective sum of the world’s data will grow from 33 zettabytes in 2018 to 175 ZB by 2025. If a full, 4-drawer filing cabinet contains about 1 gigabyte of text data, that’s the equivalent today of these filing cabinets springing into existence at the same rate that espresso cups of water go over the Niagra falls. At this rate, it would take just under 2 minutes for fresh data to exceed ALL of the data that existed in the world of 1986.

(One filing cabinet filled as each espresso cup of water falls)
We all know what’s changed between 1986 and today to cause the explosion of this information economy. The decentralised Internet has allowed the creation, sharing, and publishing of data and content to proliferate exponentially, without the need for centralised publisher’s approval or printing equipment. Further, beyond blogs and cat videos, an ever-increasing amount of this information is now procedurally-generated, never to be seen by human eyes but instead the prized resource for an impalpable network of algorithms and APIs emerging from the hyper-connected fabric of cyberspace. IT innovation races on, constrained only by the imagination of the architect, be it man or machine.

So if the internet is a compelling example of how decentralisation liberated and supercharged the information economy, the financial economy, by contrast, looks positively primordial.
So why haven’t we seen the same with finance?
The traditional financial system is still just like the state of information before the internet. It is centralised, and a top-down system. In top-down systems, objectives start at a high level, and increase in complexity as that objective is broken down into smaller more manageable units. Most states, corporations, and other man-made systems are organised in this way. They’re easier for us to manage, understand and regulate, but the problem is that the scope and potential of such systems are constrained by early decisions made with limited information. Chance innovation and serendipity are less likely to occur. Actual end user feedback takes time to travel back up to the decision makers. Goals are inflexible and unresponsive to changing conditions.
Most importantly though, top-down systems naturally create silo effects. Everything is partitioned and guarded. Bankers compete with their own colleagues for bigger bonuses. Managers zealously guard their resources and reach to hit their targets even if they no longer make sense. There is little incentive to collaborate, spend time on cultivating new ideas, or spend money on connecting or automating legacy infrastructure. Walls are everywhere in the financial system, between companies but also within them. Little wonder then that in today’s financial system most things work pretty much like they did a century ago. Humans still rule, and even early efforts in algorithmic automation (e.g. trading strategies) are confined to specific sectors and shrouded in secrecy. In finance, then, people generally have got used to meaningful global innovations like ATMs or credit cards taking decades to emerge, and as a result are completely unaware of the impending explosion of exponential change that’s about to occur.

Changes to the status quo that require some painful reversal before moving forward in a new direction don’t happen naturally, and rarely from the top down. It’s why societies undergo revolutions, incumbent companies undergo break-ups, and financial services are still bloated with rent-seeking humans extracting value and building walls. I don’t blame the bankers or rent-seekers; it’s perfectly rational human behaviour given this existing system. But those walls are about to come down.
Blockchain is not a top down system. It doesn’t care about profits. It doesn’t need walls to protect itself. It doesn’t even really need people to work. It is decentralised, open, and apolitical. Essentially, it’s that critical financial piece we were missing; achieving for digital scarcity what the Internet achieved for digital abundance, and allowing for the transfer of value across an untrusted medium without the need for humanised financial silos. Together, these will merge to form a substrate for the emergence of a whole new economy. It will be a fully programmatic economy, compatible with automation, an economy dehumanised by A.I. . Without walls, human gatekeepers will become unnecessary. Machines will transact directly with machines. Data and predictions will be tradable assets. Economic development will be uninhibited by boardrooms or biology. And without these limitations, progress towards dehumanisation of the economy will be a detonation comparable to the Information Explosion that started in the late 20th century. The game will change, machine Economics will emerge, and our human needs will increasingly be only a minor parameter in the unfathomable system that emerges. Best we stick up for ourselves…

In this series I will try to unpack how I see this transformation unfolding. While it’s impossible to predict the exact sequence of developments, I can generally see innovations falling into two categories or dimensions, which I shall call Connectors and Compounders. Connectors will refer to ‘horizontal’ developments that level the playing field; breaking down walls and silos, bridging gaps, increasing velocity and collaboration through connectivity and interoperability. Compounders will refer to ‘vertical’ developments or layers that leverage Connectors to make impossible things possible; brand new capabilities that emerge from this substrate, enabled by the decentralised and machine properties of the system.
Through these Connectors and Compounders effects, I expect the pace of change towards a dehumanised economy to be rapid and unexpected. Things are already happening, and while most people focus on crypto prices the foundations of the machine economy are being laid.
(stay tuned for Part 2…)
Andy
March 2019
Originally published at https://www.andybryant.me on March 29, 2019.