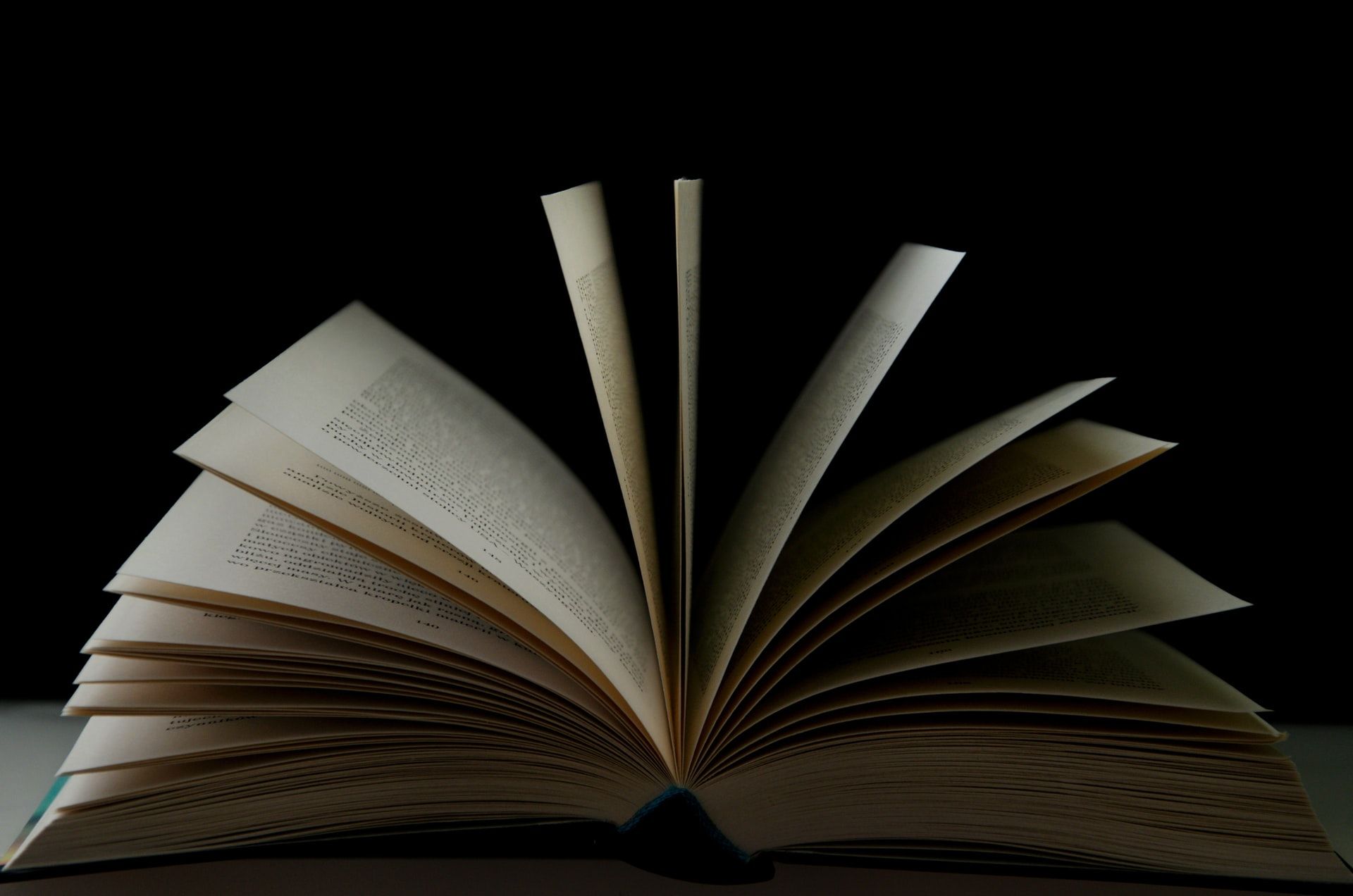 In this article, we present how to improve AllenNLP’s coreference resolution model in order to achieve a more coherent output. We also introduce a couple of ensemble strategies to make use of both Huggingface and AllenNLP models at the same time.

In short, coreference resolution (CR) is an NLP task that aims to replace all ambiguous words in a sentence so that we get a text that doesn’t need any extra context to be understood. If you need a refresher on some basic concepts, refer to our introductory article.

Here, we focus mainly on improving how the libraries resolve found clusters. If you are interested in a detailed explanation of the most common libraries for CR, and our motivations feel free to check it out.

Both Huggingface and AllenNLP coreference resolution models would be a great addition to many projects. However, we’ve found several drawbacks (described in detail in the previous article) that made us doubt whether we truly wanted to implement those libraries in our system. The most substantial problem isn’t the inability to find acceptable clusters but the last step of the whole process – resolving coreferences in order to obtain an unambiguous text.

This made us think that there might be something we can do about it. We’ve decided to implement several minor changes that result in a significant improvement of the final text. As AllenNLP seems to find more clusters, which are often better, we settled on a solution that focuses more on this model.

Overview of the proposed improvements

We’ve decided to consider AllenNLP as our main model, and utilize Huggingface as more of a reference while using it mostly as a refinement to AllenNLP output. Our solution consists of:

To refine the replacement of coreferences there are several problematic areas that can be somewhat easily improved upon:

All of the above problems are represented below with examples:

Text that lacks a meaningful mention (e.g. noun-phrase) in the cluster.

Text with cataphora – a pronoun precedes a noun-phrase.

We propose the following solutions:

In the next section, these approaches are explained in detail – both AllenNLP improvements and strategies for combining models. Also, whether you’d like to go further in-depth or just skip the details, all code from the next chapter is available on our NeuroSYS GitHub repository.

Thanks to Huggingface being based on spaCy it’s effortless to use and provides multiple additional functionalities. However, it’s much more complicated to modify. spaCy provides many mechanisms that prohibit you from accessing or changing the underlying implementation.

What’s more, in addition to AllenNLP acquiring a higher number of valid clusters compared to Huggingface, we’ve also found the former to be much easier to modify.

In order to modify AllenNLP’s behavior, we focus on the coref_resolved(text) method. It iterates through all clusters and replaces all spans in every cluster with the first found mention. Our improvements concern only this function and the nested methods inside it.

Below is an example of a short text that contains all three above-mentioned problems we’re trying to solve, on which we’ll focus for now.

As we try to keep our solution straightforward, we’ve decided to define a meaningful mention simply as any noun phrase.

For each cluster, we acquire indices of spans containing noun phrases (we use them also in our following improvement). The simplest way to verify if a token is a noun or not is using spaCy! It turns out that underneath AllenNLP also uses a spaCy language model, but only to tokenize an input text.

The nested method that interests us here the most is replace_corefs(spacy_doc, clusters). Not only does it make use of the spaCy Doc object but also contains all the logic necessary to implement our improvements. It looks something like this:

From the spaCy documentation, we know that nouns are represented by two part-of-speech (POS) tags: NOUN and PROPN. We need to check whether a POS tag of every span in a cluster (actually every token in each span) is one of these two.

Below is shown how this small piece of code improves coreference replacement. For now, we focus mainly on the first cluster, as that’s the one that shows the current problem. 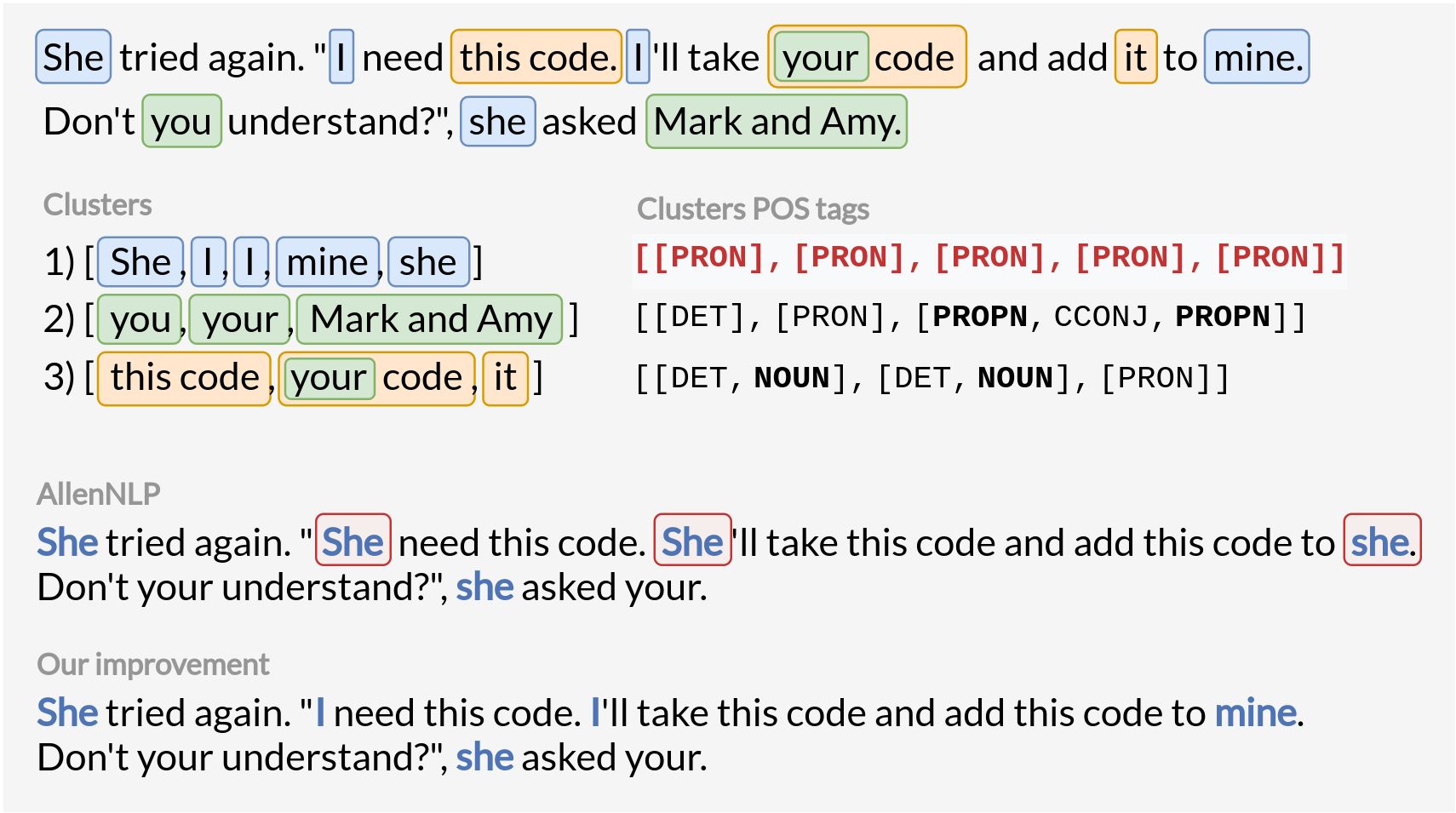 Many coreference resolution models, such as Huggingface, have serious problems with detecting cataphora as it’s a rather rare occurrence. On one hand, we might not be interested in resolving such unusual cases that cause even more problems. On the other hand, depending on the text, we may lose more or less information, if we neglect them.

AllenNLP detects cataphora but since it treats the first mention in a cluster as its head, it leads to further errors. That’s because the cataphor (e.g. a pronoun) precedes the postcedent (e.g. a noun phrase) so a meaningless span becomes a cluster’s head.

To avoid this we’ve proposed to consider the first noun phrase in the cluster (not just any mention) as its head, replacing all preceding and following spans with it. This solution is trivial and though we can see the advantages of other, more sophisticated ideas, our one seems to be effective enough for most cases.

Let’s take a closer look at a few key lines in the AllenNLP’s replace_corefs method.

To make our solution work, we need to redefine the mention_span variable (the head of the cluster) so it represents the first found noun phrase. To achieve this, we use our noun_indices list – its first element is the one we want.

Let’s see how it improves the output. This time we focus on the second cluster. Now there is no information loss! However, since AllenNLP returns results depending on the order of the clusters found there is also a small mistake in our version here. Don’t worry though, we are going to fix it in the next section. 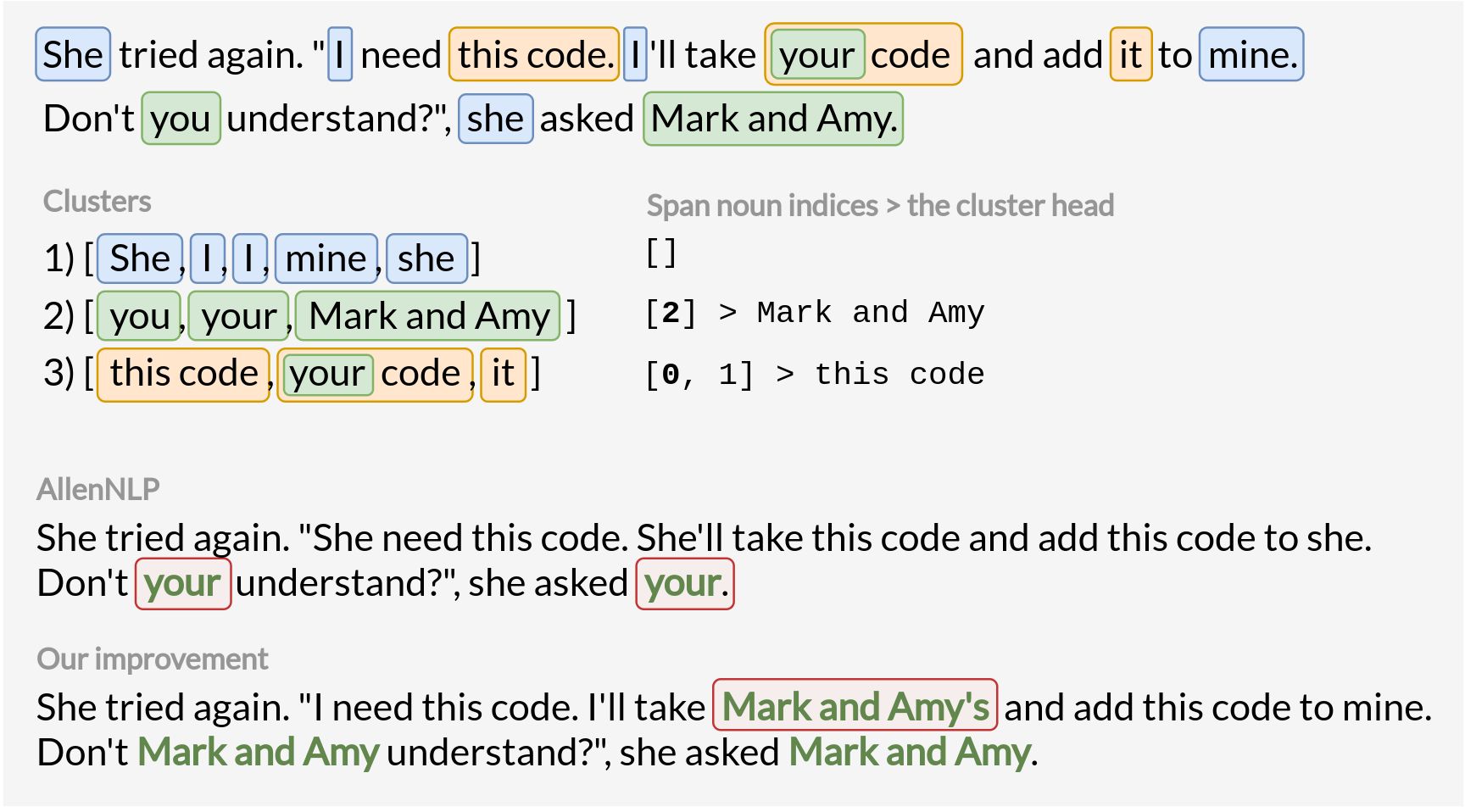 The last improvement concerns spans that are composed of more than one mention. As we’ve shown in our previous article there are several strategies that can be employed to solve this problem, none of which are flawless:

We believe that the 3rd strategy – replacing only the inner span – is a good compromise between information gain and the number of possible errors in the final text. It also comes with one additional feature – now regardless of the clusters ordering the output will always be the same.

To implement it, we just need to detect outer spans and omit them. To do so, we simply have to check if particular span indices contain any other mentions.

In the end, we acquire a text that has all of our improvements. We’re aware that it could’ve been resolved even better but we find this trade-off between the solution’s simplicity and validity of the resolved text just right. 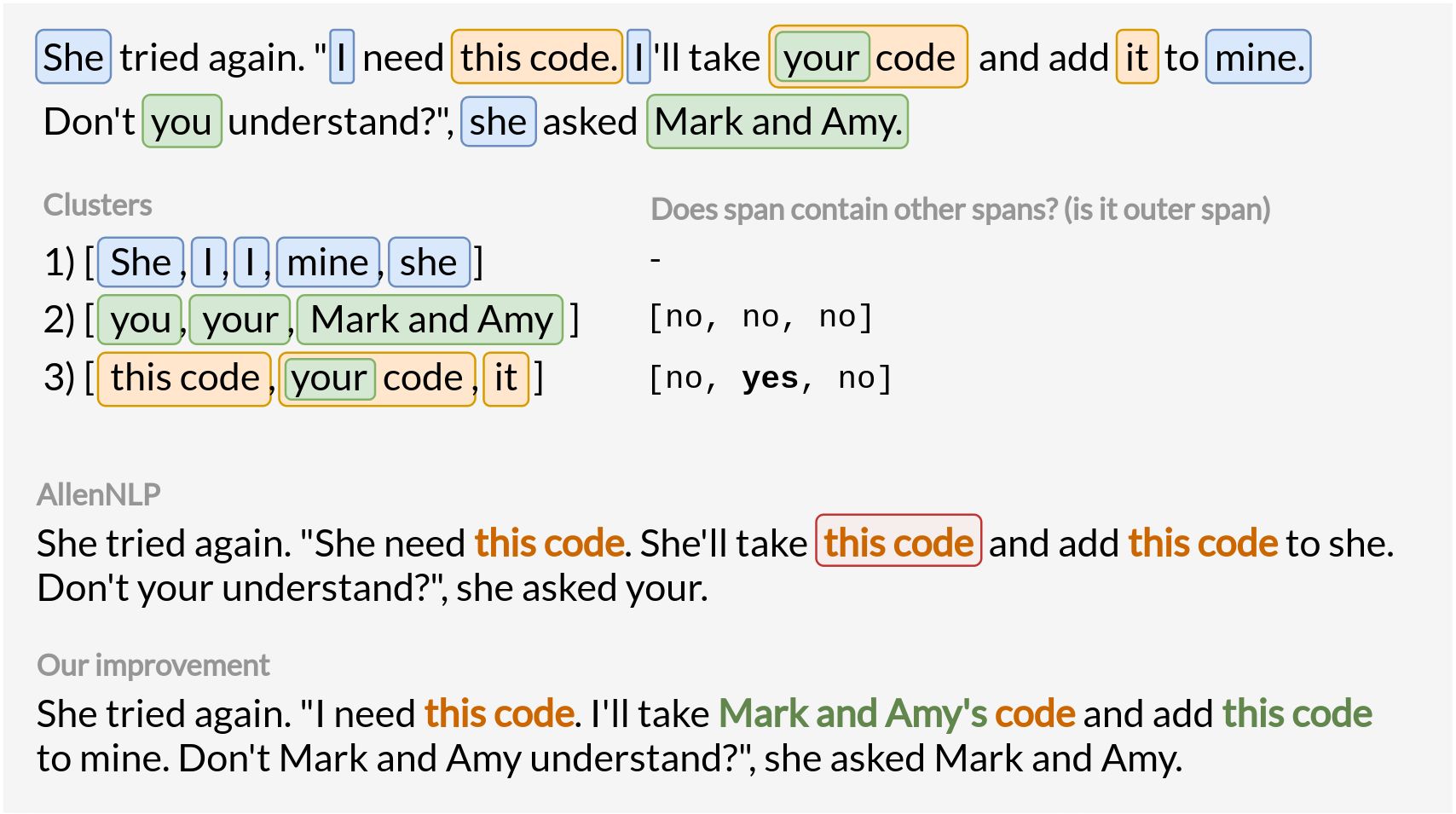 As shown in the image above, we can obtain better results while enhancing only how the found clusters are resolved.

After all the improvements, we can now move to intersection strategies – ideas on how to combine both AllenNLP and Huggingface clusters. As we’ve mentioned before, we believe that AllenNLP produces notably better clusters, yet it isn’t perfect. To acquire the highest possible confidence level about the final clusters, without any fine-tuning, we propose several ways of merging both models outputs:

As AllenNLP is usually better we treat it as our base, so in dubious cases, we construct the output solely from its findings. As the code isn’t as short as in the case of discussed improvements we provide a detailed Jupyter Notebook, and here just peek at the strategies’ outputs.

The following example is taken from the GAP dataset, which we’ve previously explained in detail. 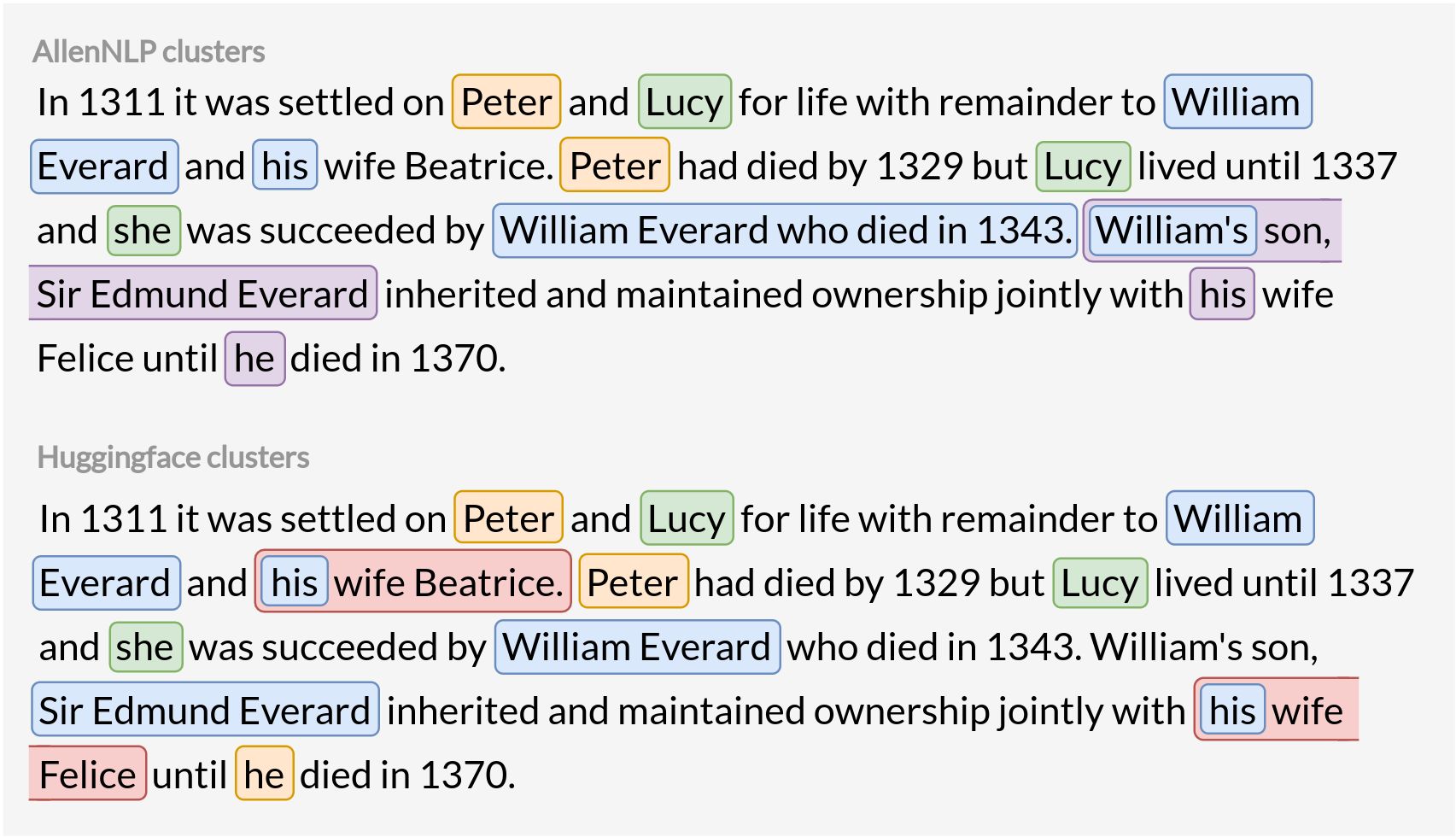 To efficiently compare proposed intersection strategies, it’s easier to think of models’ outputs as sets of clusters, like the ones illustrated below. It’s worth noting that AllenNLP and Huggingface not only found slightly different mentions but also whole clusters. 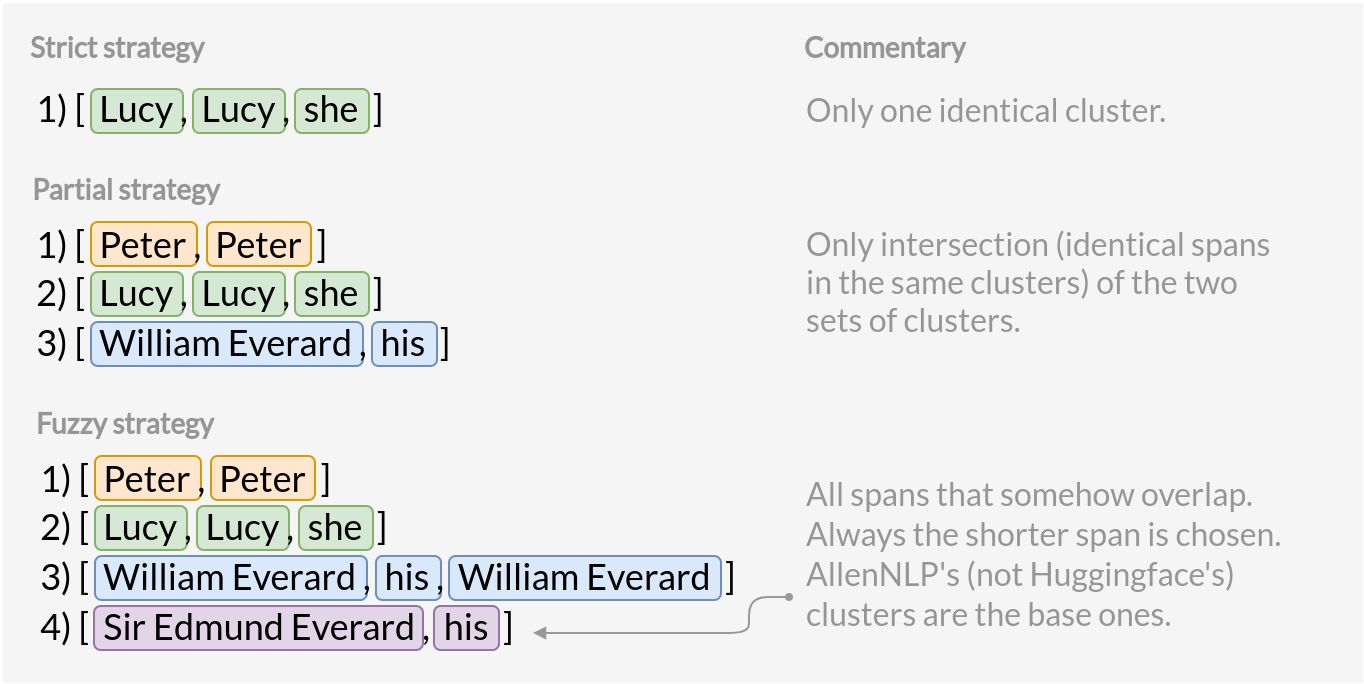 We lean mostly towards the fuzzy strategy. It provides a higher certainty than the output of a single model while also providing the largest information gain. All strategies have their pros and cons so it’s best to experiment and see what works best for your dataset.

Let’s look at the final result – example with resolved coreferences, including our previous improvements:

Even though the final text doesn’t sound very natural, we must remember that the aim of coreference resolution is a disambiguation for language models. As a result, they can have a better understanding of the input and are able to produce more appropriate embeddings. In this instance, we lack only a single piece of information – who died in 1370 – while having obtained many correct substitutions and got rid of overly long mentions.

Throughout our articles, we’ve tackled a major issue in NLP – coreference resolution. We’ve explained what CR is, introduced the most common libraries as well as the problems they come with, and now shown how to improve upon the available solutions.

We’ve tried to clarify everything we could have with multiple images and various examples. Both basic usage, as well as our modifications, are available on our NeuroSYS GitHub.

Hopefully, by now you are familiar with coreference resolution and can easily adapt our proposed solutions to your project!