How I ran a Successful Co-creation Workshop as a CEO

Founder and CEO of Moneycado

How do you build something that users really want? Perhaps you could assemble a few and ask for them to make it themselves!

This is precisely the approach behind co-creation; working alongside your potential users to design your product. Unlike a focus group - in which you're soliciting users for their experience with the problem you're trying to solve, or getting feedback on your ideas - in a co-creation workshop you are designing alongside your users.

I recently ran two co-creation workshops for Moneycado. I found them to be brilliant sources of inspiration, yet there are certainly ways I could have improved the structure and execution of the workshops. In this article I'll write about what I did, and what I could have done better.

Getting the right people in the room is essential for good co-creation. Since you're asking users to opine directly on product, they must have first-hand experience of the problem you're trying to solve.

For Moneycado, we had identified previously that MBA students were a core group of users for our travel money product. They travel frequently, are relatively open to new fintech apps, and are in our demographic target (25 - 34 years old).

A friend connected me with the President of the Oxford Fintech Club, who then circulated this form to the Fintech Club and the Tech Club. He also helped me book a room at the university to run the sessions. 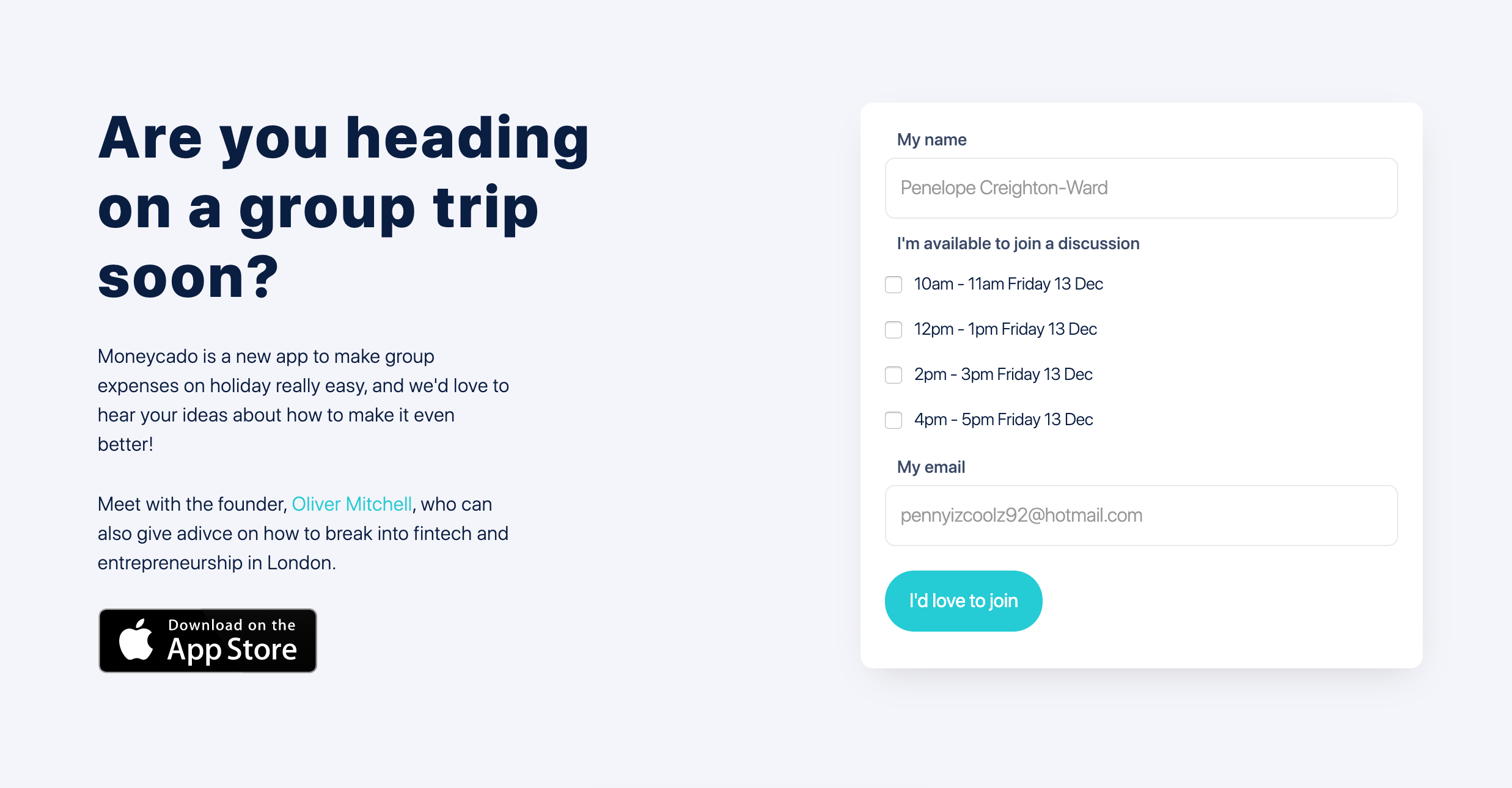 Having easy access to your users, whether through personal connections, participation in online forums, or building an audience with useful content, is so important. It can also be time intensive depending on the profile of your users. It took me a month of emails back and forth to lock down these dates!

Equally important is putting participants in the right frame of mind to be creative. For many people (and especially business school students), being asked to come up with ideas can create anxiety. It's essential to create a sense of psychological safety before moving into exercises.

To start each workshop we went round as a group to introduce ourselves and talk about our interest in fintech. It helped to break the ice on a topic of common interest, and also gave each participant a chance to address the group before moving into the exercises.

Looking back, I should have also included a game (like these ones) as well. The first five minutes set the tone for the entire workshop; it's worth the time to get participants physically interacting with high energy. It would also have given participants permission to act a little outside their usual classroom behaviour!

The first exercise I ran was discovery. It's an open discussion on the problem area, and started with a simple question:

Tell us about the last holiday you went on. Did you budget for the trip? If so, how did you go about it?

Thereafter it fell to the facilitator (i.e. me) to fan the flames of conversation. Sometimes this was delving deeper into a participants' anecdote, picking up on a point they brushed by. Sometimes it was trying to bring multiple participants into a topic, prompting "has anyone else had anything similar?". There's a delicate balance to ensure each participant speaks for a roughly equal amount, it can be easy for extroverted participants to start to dominate the conversation if left unchecked.

First, it's a great source of information on the problem area. So long as you're focusing on a recent past experience (and curbing the impulse of participants to generalise), you are gathering very valuable data.

Second, it puts participants in a great frame of mind for the subsequent exercises. Often anecdotes were punctuated with "Oh yeah, that's happened to me as well!" or "That reminds me about...". I could often feel the conversation gather momentum with particular topics (for example whether to use cash or card), and knew that we'd hit on an important area.

After discovery, we began to put together a mind-map. I explained the brief ("setting and tracking budget on holiday") and initially asked very openly:

What comes to mind?

Thereafter I had a number of prompting questions to stimulate discussion, including:

What kinds of things do we want to know about our holiday budget?How might we want to view the information?What other things are linked in our minds to the budget?How are we thinking about budget as we're on the trip itself?

If the conditions were set right initially then the ideas should start to come quickly at this stage. It falls to the facilitator simply to write down enough information to serve as a prompt later.

The next time I do this, I will also try having one of the participants scribing the ideas on the whiteboard. Any action which helps participants feel more like co-creators and less like subjects is good, and it may have been useful to relinquish some structure in order to get some really out-there ideas!

I also noticed that the level of energy in the room has a big effect on the success of mind-mapping. In my first session we were packed into a small meeting room, where the second session was in a cavernous seminar room where participants were further away. The energy was palpably different, and I believe this is partially down the room itself. Volunteering ideas across a big room feels less communal and more hierarchical.

The finale of the workshop was Crazy 8s. I explained the exercise and gave an example of some crudely drawn scribbles for what the output should look like. Giving an example turned out to be important; as soon as said we would be sketching our ideas I could feel the participants getting nervous about their own drawing ability.

This, I believe, is the core of a good co-creation workshop. Participants will always feel reluctant to design solutions themselves. It's something they've never done before, and most participants will harbour apprehension about trying a new skill. You will only get great results from this exercise if you've built sufficient rapport and safety in the session.

I use a gym timer for the intervals (8 x 40 seconds), as I don't like to touch my phone during the exercises. As soon as I started the timer everyone's energy shifted to the blank paper. There's something wonderfully focusing about a short deadline.

We ran two rounds of the exercise. In the second I stressed that each participant should aim to put something down on each panel of the page, no matter how crazy. The sketches were not there for evaluation but to prompt discussion and exploration.

After the exercise we all picked one or two sketches of our own which we thought were particularly novel or interesting and took turns to explain them back to the group. I noticed that the process of speaking through the ideas actually helped to flesh them out far beyond what was captured on the page, and I was taking furious notes throughout the process!

After concluding the workshop, I took 20 minutes to photograph all the notes, post-its and whiteboard scribblings. I also tried to write down my unformed impressions of the workshop. Although I would review the output more carefully later, I thought it useful to record those ideas which had floated to the top of my mind. In an hour thick with ideas, it says something if a particular phrase or area has stuck in the imagination.

In summary, I think all product managers and designers should attempt to run co-creation sessions. It's logistically harder than a focus group or problem interview, but it creates the real possibility of entirely novel ideas.

The most important factor for success is psychological safety. A co-creation workshop is a space for participants to act outside their usual roles; to be involved actively in the creation process and express themselves artistically. To do so they must not feel judged, rather that their contribution is valued and incorporated.

(Disclaimer: The Author is the Founder and CEO at Moneycado)

Related Stories
Subject Matter
Partner with us for Digital Product Development by @AWH
#promoted
8 Key Traits Of The Perfect Co-Founder by @paolodotta
#picking-a-good-co-founder
"I quit university and put all my time and energy into getting the MVP finished", says Sean Yu by @paolodotta
#expert-interview
Shifting from a sales-led growth to product-led growth mindset by @cankiz
#product-management
How We Carved A Niche For An Rx Delivery Service by @salemm
#product-market-fit
How to Measure Product-Market Fit by @noaganot
#productmanagement