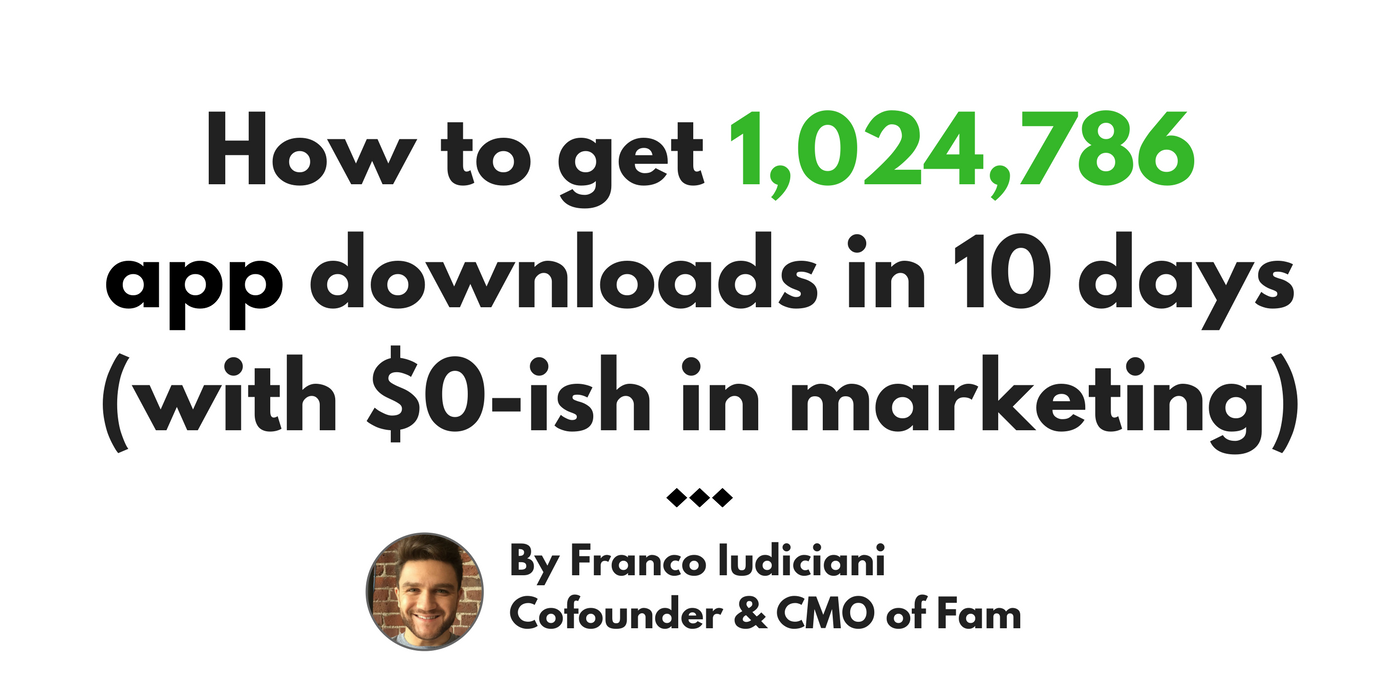 And you’ve probably seen those “other” headlines, too…

You know, the ones that are titled just like the one you’re reading right now: “How to get 17,556 app installs in 3 days without spending a dime in marketing!”

Well, the reality for most apps (unless you’re one of those top 4–5 anomalous social apps that we all use so religiously) is that you simply DO need to $pend a little something at first to feed the growth mechanisms within your product, and that’s totally okay.

This was precisely the case for the Fam app’s insane growth following our launch and each day since (though the marketing spend was negligible). One thing to note before proceeding: Every. App. Grows. Differently.

As I explain how we got to our 1 millionth install, its important to note that the Team behind your product is the most controllable factor to its’ success. Our persistent, unreal technical team, led by our superstar CTO and fellow cofounder kevin flynn, and steadfast yet receptive CEO and cofounder Giuseppe Stuto, have been trying to get to this point since late 2014. And our two dynamite engineers, David and Steven, think we’re totally insane.

We’ve been iterating and experimenting year-after-year to reach this point of critical mass and near product-market fit for almost 3 years. (For a behind-the-scenes peek into the product decision-making leading up to Fam, you gotta click to read my cofounder Kevin Flynn’s post here about the “aha!” and “oh sh*t” moments that steered us down the Fam path).

During this time, we produced several different product experiences for our target demographic (teens and college students) in the hope that just one of them would achieve some semblance of product-market fit in a seemingly-impossible to please userbase.

That experience is Fam.

All the products we’ve built, though impeccable in experience and functionality, did not grow anywhere close to the level that Fam has grown (despite identical marketing and growth resources at-launch). Fam is truly a result of an accumulation of learnings that has compounded into the success and traction that it is today.

Our in-office cadence of “iteration based on accumulated learnings and data” has so far paid off. That should be every Team’s goal, not just “lots of downloads.” Although, the more users you have, the more you are able to learn.

December 5th, 2016 (MVP LAUNCH NIGHT, BABY!)
Step 1: Prepare App Store Page
6:30pm EST
Fam app gets approved by Apple and is available for download on the iMessage App Store (we launched as iOS-only, and still are iOS-only). I made sure our App Store Page was immaculate. The page should be designed to convert EVERY visitor into an install, not just those who seek it out or are directed to the page through an invite link. Simple and vibrant metadata (screenshots), short and direct description copy, and specific SEO tags are a must for those users who would be searching Fam from Word-Of-Mouth. You’ve got to be true, genuine, and appeal to emotion in some way.

Step 2: Establish Budget for Campaign
6:45pm EST
I had a VERY tight marketing budget to work with to promote Fam’s launch: no more than $500 was initially set aside to play around with. Why this amount? At this point in Fam’s history, our Company (Smack, Inc.) only had mere months of runway left in our bank account, literally, so we had to keep things tight.

Step 3: Assess Your Target Demographic
7:00pm
We decided on targeting 16–21 year olds (high school and college students) for this campaign. Context: We understand teens and college students pretty well. Prior to Fam, we built SmackHigh, a high school student-curated Twitter platform where students submitted school news, opinions, sports talk, and funny stories anonymously, which reached over 1 million opt-in subscribers across 10,000 of the US’ 33,000 high schools. During that stint, the user surveys, raw content, and our candid conversations with teens gave us the pathway to learn nearly everything about this demographic and how they use social products [and what they actually look for in them, too — a blog about those (concrete) findings is coming soon)].

Step 4: Research Popular Influencers on Social Media
7:15pm
Figure out WHO the most relevant influencers would promote our MVP group video chat app. Obviously, these influencers’ followers also had to be mainly teenagers and/or college students. To assist with this seemingly painstaking task, we sought out a leading Social Media Influencer Account “broker” of sorts, called Flipmass, to help us mine Influencer Accounts on social media (mainly Twitter) that met our demographic and $500 budget. Here are some of the Twitter account usernames on which we decided to post the Fam promotional tweet:

Okay, now pause and look at the Tweet once more: What are some things you noticed?

Step 6: Analyze Market Reaction (aka, what teens thought about Fam)
7:45pm
After the Influencers posted the tweets we created, I immediately searched relevant keywords on Twitter to see what people were saying (“Fam app,” “group video chat,” “group ft,” “group facetime,” etc.) This proved very useful because it 1) gave me immediate feedback for myself, 2) tells me general user sentiment and the market’s reaction to the product, and 3) its unbiased; when a teen tweets, it’s almost always without any filter ;) That night, teens and college students on Twitter flooded their friends’ timelines with tens of thousands of tweets containing such keywords referring to the Fam app.

Step 7: Get 624 Installs Per Minute
11:00pm
During the 11pm EST hour, 624 people were installing our app every minute. The seemingly small $500 Promotion was more than a huge success, and new users from the promotion were inviting their groups of friends to video chat on Fam. How? They sent a Fam to their iMessage group chats (which, based on our observations, surveys, and other data we’ve collected, teens have 6 friends in one group chat on average). The campaign was a clear success, not just in terms of conversion or growth, but that it gave us the reaction from the market that we needed to validate our hypothesis and plan the next steps in our roadmap.

Step 8: Hit 100,000 Installs
12:00am
We ended up just not really sleeping that night; I had never felt a rush of adrenaline like that before in my life. I didn’t sleep really well at all the next couple weeks actually. The real work had just begun.

*Note: After this initial 4-hour campaign, we continued more similar content experiments with Influencer Accounts over the next week.

Today, Fam grows 100% organically with literally ZERO marketing. And where do the majority of our new users come from? Word-of-Mouth and iMessage group chats. We are consistently in the Top 20-30 of the Social Networking Category on the App Store, among some long-time brand name social pioneers and generously-backed competitors.

Looking back on the launch and all the progress we’ve made today, this is by far the clearest, most unwavering theme:

Bend, adjust, and be receptive to what the market demands.

It took us almost 3 years to finally get here. Not only have we grown to know the teen and college demographic like the back of our hands, but the 5 of us have also grown to be a better Team of entrepreneurs together; we take the risk of adjusting when the outcome is both unknown and terrifying.

Related Stories
Subject Matter
DeFi Projects with the Highest Yield by @mabdullah
#defi
#MyStartInTech: An Interview with Mary Job, Founder of HowDoYou.Tech by @dottechdomains
#mystartintech
F is for Fendi: How Luxury Brands Cater to Gen Z via Social Media by @alahausse
#website-development
Improving Open-source Software Security for Java Developers by @ax
#maven
Why Your Location Privacy Matters by @jmau111
#security