I recently came across this very interesting Twitter thread which claims that:

There were no new startups which originated in the last five years in the US whose product got > 1 million monthly active users.

While I don’t know if it’s actually true or not, but this got me thinking about the successful apps in the last 5 years. Only 3 major names come to mind: Tiktok (started in China), Fortnite (by Epic Games, started in 1991) and Discord (product launched in 2015 but the company was founded in 2014). Let’s dissect one of these three products today.

Discord is a voice and text chat app meant specifically for gamers. It has 56 million monthly active users (also, 250mn user accounts and $2bn valuation) but its origin story doesn’t get discussed much.

Before today, I didn’t even know what exactly it did. I just knew that it’s a chat app for gamers. Why do gamers need a different chat app when there are so many chat/discussion apps already? Can’t they use Whatsapp/Reddit/Twitter like the rest of us mortals?

The answer is simple. It is not just a chat app. Yes, it is a discussion platform/community of gamers but it’s much more than that. It solves a very specific problem. The problem of voice calling your teammates while playing an online team-based game (like Dota etc). Taking an example of a physical sport, imagine playing football with your teammates but you can’t talk to each other or see each other. There is no way to coordinate, right? Discord provides exactly that, but for online games. Its Skype voice calling but for gamers. Discord started with that problem and has evolved into what it is now - a community of gamers.

Slack and Discord are very similar chat apps. Just that one is for work, another for games. Not only they are similar products, but their origin story is also shockingly similar. Founders of both these companies have followed this cycle not once but twice.

Don’t believe me? Check this.

This sounds too much of a coincidence to me. Not only did they ended up making multi-billion dollar chat apps but followed the exact same path.

It makes me wonder, should I start making a game? 🤔 Surely I will fail but I might end up building a successful business by pivoting. Survivorship bias is a real thing! 😅

Pivot from Fates Forever to Discord

Pivots are hard. They are even harder when you have a ton of money and a bunch of employees working for you.

Jason raised ~$10mn for his vision of building hardcore multiplayer iPad games. Just after raising the round he claimed:

Jason started working on Fates Forever in mid-2012. They did a soft launch in mid-2013. After working on it for 2 years, they launched the game in mid-2014. Late 2014 they realized that the game was not really taking off. He failed to find a paying audience for the game. He then chose to shut down the game.

This style of pivoting is something that I find interesting. Conventional wisdom would dictate that one should focus and work on one idea at a time. Spending 2 months on multiple ideas is a significant amount of time. This is probably a luxury that Citron possessed as he already had a bunch of money as well as a decently sized team, chunks of which were working on multiple projects. Effectively, one individual team was working only on one project. Slowly he shifted all the developers to build Discord and fired the designers. This must have been tough but hard choices need to be taken.

The idea of Discord was also not the founder’s but of one of the employees. He wanted to work on it and eventually, the whole team joined. Probably, one of the other advantages of hiring a strong early team. If you pivot, they might give you a billion-dollar idea.

Do consumer apps need to solve a specific problem?

This brings me to another question which I had for a long time... What exactly is Discord? What does it do?

It did not start off with a vision to build Slack or a discussion platform for gamers. It started with a very specific problem that multiplayer gamers on PC faced. Most of the popular multiplayer games required users to build teams and those teams then competed with each other (instead of playing as an individual). This required these gamers to use voice chat software to coordinate and communicate with each other so that they can play the game effectively. Most people used Skype for the same at that time. Few serious users used a paid service called Teamspeak which was specifically built for this but was an old company with outdated technology.

It was not a completely new idea. Teamspeak was the biggest incumbent. There were other startups like Curse as well who were doing the same thing. Curse had raised $16mn in mid-2014 and already had more than 1mn monthly active users on its voice chat app.

So basically, Citron was choosing an idea which he knows - works (as others were doing it already) and was betting on the fact that he will do it better.

Original or not, Discord was still solving a very specific problem. A lot of consumer apps start with a very vague problem such as connecting like-minded people in a neighborhood, discussion platforms, etc. But if we look back at the history of most of these products, we would find that each of them was solving a very specific problem that users faced at that time. This is true for the likes of Instagram (most of the early iPhone camera photos were blurry and ugly, Instagram made them better), Facebook (finding who else is in the same class with you and what classes they are taking), Snapchat (their initial users were school students where Facebook was banned and Snapchat gave students a chat app where the chat was untraceable and hence school never found out). The same is the case with Discord. Talking to your teammates while playing a game is a real need.

The only exception I can think of is Tiktok which solved a generic problem of self-expression and still got big. Most of the games also fall into this category (which is again I believe the main reason for hit and miss nature of games).

The early versions of Discord

After 5 months of working on the product, the team released the first version of Discord. It was not an MVP. It was a full-blown product. They were an 18 membered team working on it. Since the team had the DNA of a game studio, I guess they did not believe in “launch fast and iterate” mantra. They also had an example of Curse Voice and Teamspeak in front of them. They had to be better than them to survive. 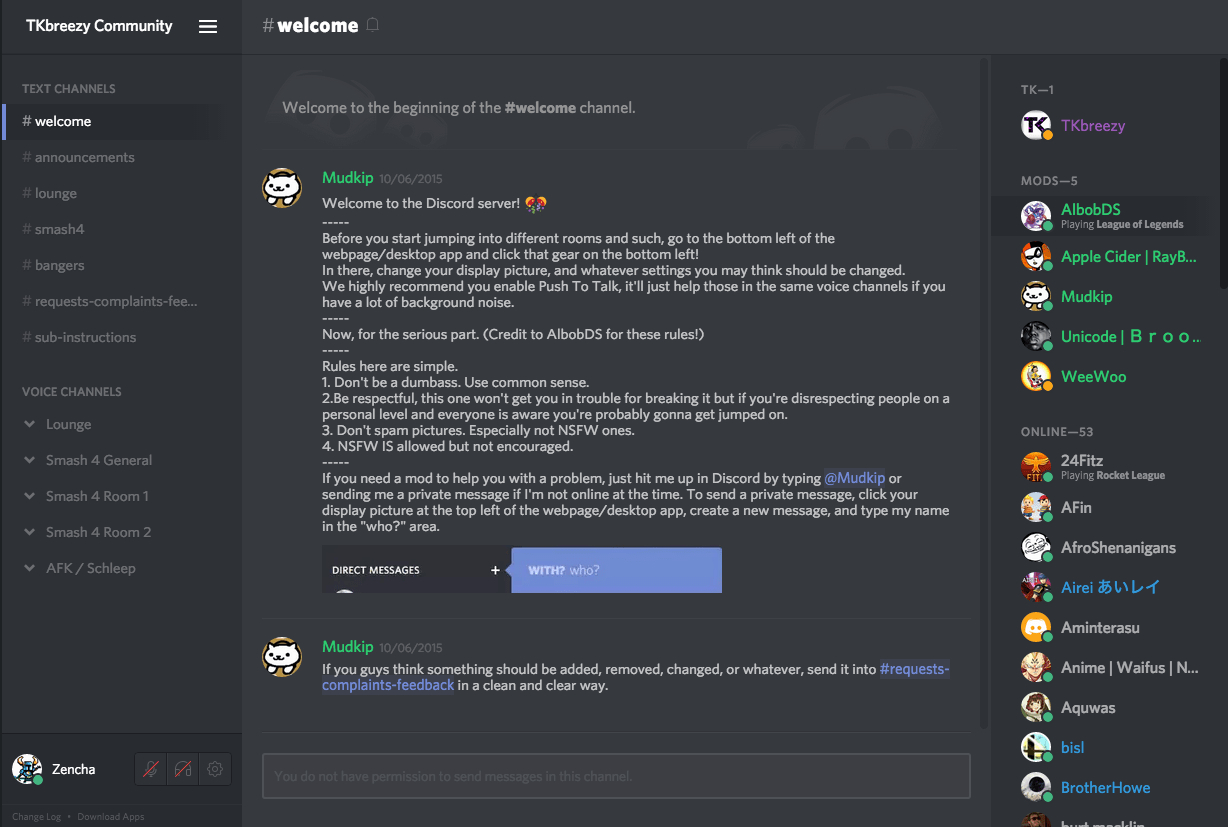 (Screenshot of Discord from Oct 2015. Note that most of the functionality was built-in at that time itself)

Another thing to note is that even their homepage and branding hasn’t changed much since launch. Their main messaging of “It's time to ditch Skype and TeamSpeak” has remained exactly the same in the last 5 years. It’s an interesting first message to a user as it gives an exact idea to the user about what Discord is and it’s better than the alternatives.

While there are a lot of benefits of “launching fast and iterating”, this Steve Jobs style of building products also has its merits as proved by Discord.

After the launch of the product, there was a 3-week period during which Discord had no users. The first distribution channel they used was Reddit. They started talking about Discord in gaming subreddits and eventually some users also posting about Discord on those subreddits. This provided the first wave of growth for them.

The second and probably the most impactful distribution channel was Twitch - which is a game streaming platform. They built an integration with Twitch allowing Twitch streamers to voice chat with their followers (with privacy options such as which users to allow or ban, etc). But just building an integration doesn’t do the job. They had to solve for a specific problem for those game streamers as well in order for them to give a shit about Discord. It turned out that security was a big problem for these streamers since millions of people would watch a streamer and anyone could turn them offline by DDoS attack as existing solutions like Skype/Teamspeak did not provide that protection. This was one front where Discord was better than anyone else in the market (even startups like Curve Voice). This led to a lot of Twitch streamers aka influencers using the app and recommending it to their followers if they wanted to chat with them. This built a free influencer marketing avenue for them.

This move to focusing on Twitch streamers as a distribution channel is interesting. Discord’s main value proposition is helping video gamers voice chat with their friends while playing. It thus requires a strong friend network (like Facebook). Focusing on Twitch streamers would mean that they are going after a follower network (like Twitter). They basically used a follower based network to acquire users and then relied on their quality of service/utility to do the job of acquiring that user’s friends.

Currently, it’s retention is really impressive as well. It has a Day 30 retention of 27% (which is almost the same as Whatsapp’s) in the US. It’s lower in other parts of the world (range of 10%-20%).