Getting Started with Web Audio API 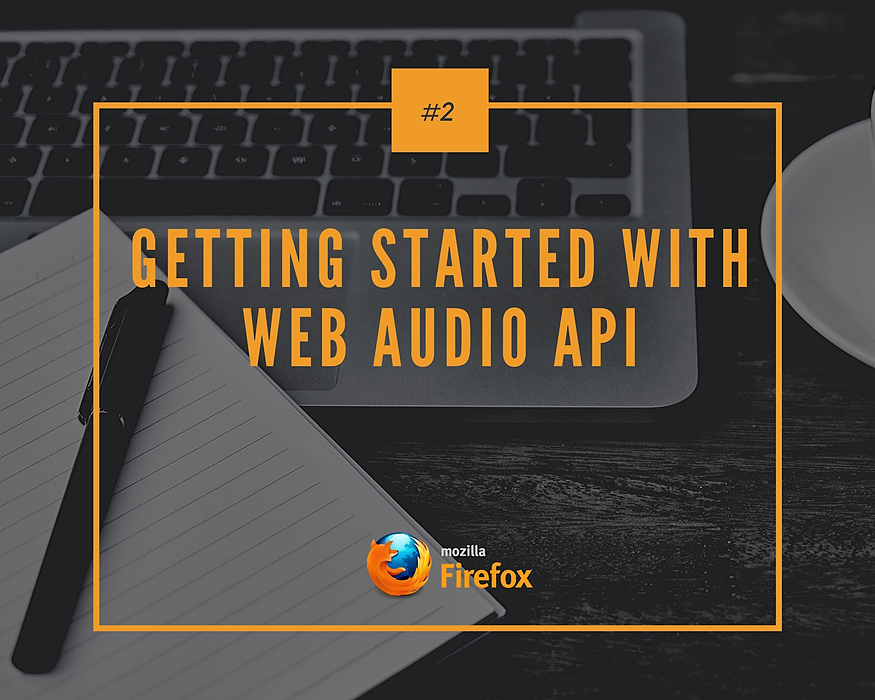 The Web Audio API provides a powerful and versatile system for
controlling audio on the Web, allowing developers to choose audio sources, add effects to audio, create audio visualizations, apply
spatial effects (such as panning) and much more.

The Web Audio API involves handling audio operations inside an audio context, and has been designed to allow modular routing. Basic audio operations are performed with audio nodes, which are linked together to form an audio routing graph. Several sources — with different types of channel layout — are supported even within a single context. This modular design provides the flexibility to create complex audio functions with dynamic effects.
Audio nodes are linked into chains and simple webs by their inputs and outputs. They typically start with one or more sources. Sources provide arrays of sound intensities (samples) at very small timeslices, often tens of thousands of them per second. These could be either computed mathematically (such as ), or they can be recordings from sound/video files (like and ) and audio streams ().
In fact, sound files are just recordings of sound intensities themselves, which come in from microphones or electric instruments, and get mixed down into a single, complicated wave.
Outputs of these nodes could be linked to inputs of others, which mix or modify these streams of sound samples into different streams. A common modification is multiplying the samples by a value to make them louder or quieter (as is the case with ).
Once the sound has been sufficiently processed for the intended effect, it can be linked to the input of a destination (), which sends the sound to the speakers or headphones. This last connection is only necessary if the user is supposed to hear the audio.
A simple, typical workflow for web audio would look something like this:

Timing is controlled with high precision and low latency, allowing
developers to write code that responds accurately to events and is able to target specific samples, even at a high sample rate. So applications such as drum machines and sequencers are well within reach.
The Web Audio API also allows us to control how audio is spatialized. Using a system based on a source-listener model, it allows control of the panning model and deals with distance-induced attenuation or doppler shift induced by a moving source (or moving listener).

You can read about the theory of the Web Audio API in a lot more detail in our article Basic concepts behind Web Audio API.

The Web Audio API can seem intimidating to those that aren't familiar with audio or music terms, and as it incorporates a great deal of functionality it can prove difficult to get started if you are a developer.
It can be used to simply incorporate audio into your website or application, by providing atmosphere like futurelibrary.no, or auditory feedback on forms. However, it can also be used to create advanced interactive instruments. With that in mind, it is suitable for both developers and musicians alike.
We have a simple introductory tutorial for those that are familiar with programming but need a good introduction to some of the terms and structure of the API.
There's also a Basic Concepts Behind Web Audio API article, to help you understand the way digital audio works, specifically in the realm of the API. This also includes a good introduction to some of the concepts the API is built upon.
Learning coding is like playing cards — you learn the rules, then you play, then you go back and learn the rules again, then you play again. So if some of the theory doesn't quite fit after the first tutorial and article, there's an advanced tutorial which extends the first one to help you practise what you've learnt, and apply some more advanced techniques to build up a step sequencer.
We also have other tutorials and comprehensive reference material
available that covers all features of the API. See the sidebar on this
page for more.
If you are more familiar with the musical side of things, are familiar with music theory concepts, want to start building instruments, then you can go ahead and start building things with the advance tutorial and others as a guide (the above linked tutorial covers scheduling notes, creating bespoke oscillators and envelopes, as well as an LFO among other things.)
If you aren't familiar with the programming basics, you might want to consult some beginner's JavaScript tutorials first and then come back here — see our Beginner's JavaScript learning module for a great place to begin.

The Web Audio API has a number of interfaces and associated events,
which we have split up into nine categories of functionality.
General audio graph definition
General containers and definitions that shape audio graphs in Web Audio API usage.
The interface represents an audio-processing graph built from audio modules linked together, each represented by an . An audio context controls the creation of the nodes it contains and the execution of the audio processing, or decoding. You need to create an before you do anything else, as everything happens inside a context.

The dictionary is used to provide options when instantiating a new .
The interface represents an audio-processing module like an audio source (e.g. an HTML or element), audio destination, intermediate processing module (e.g. a filter like , or volume control like ).
The interface represents an audio-related parameter, like one of an . It can be set to a specific value or a change in value, and can be scheduled to happen at a specific time and following a specific pattern.
Provides a maplike interface to a group of  interfaces, which means it provides the methods , , , , and , as well as a property.
The interface acts as a base definition for online and offline audio-processing graphs, as represented by and respectively. You wouldn't use directly — you'd use its features via one of these two inheriting interfaces.
The event
The event is fired when playback has stopped because the end of the media was reached.
Defining audio sources

Interfaces that define audio sources for use in the Web Audio API.
The is a parent interface for several types of audio source node interfaces. It is an .

If you want to extract time, frequency, and other data from your audio, the AnalyserNode is what you need.
The interface represents a node able to provide real-time frequency and time-domain analysis information, for the purposes of data analysis and visualization.
Splitting and merging audio channels

Using audio worklets, you can define custom audio nodes written in JavaScript or WebAssembly. Audio worklets implement the interface, a lightweight version of the interface. Audio worklets are enabled by default for Chrome 66 or later.
The AudioWorklet interface is available via , and allows you to add new modules to the audio worklet.
The interface represents an that is embedded into an audio graph and can pass messages to the corresponding .
The interface represents audio processing code running in a that generates, processes, or analyses audio directly, and can pass messages to the corresponding .
The interface is a -derived object representing a worker context in which an audio processing script is run; it is designed to enable the generation, processing, and analysis of audio data directly using JavaScript in a worklet thread.

Before audio worklets were defined, the Web Audio API used the   for JavaScript-based audio processing. Because the code runs in the main thread, they have bad performance. The is kept for historic reasons but is marked as deprecated and will be removed in a future version of the specification.
The ScriptProcessorNode interface allows the generation, processing, or analyzing of audio using JavaScript. It is an audio-processing module that is linked to two buffers, one containing the current input, one containing the output. An event, implementing the interface, is sent to the object each time the input buffer contains new data, and the event handler terminates when it has filled the output buffer with data.
(event)
The event is fired when an input buffer of a Web Audio API is ready to be processed.
The represents events that occur when a input buffer is ready to be processed.
Offline/background audio processing

It is possible to process/render an audio graph very quickly in the background — rendering it to an rather than to the device's speakers — with the following.
The interface is an interface representing an audio-processing graph built from linked together s. In contrast with a standard AudioContext, an OfflineAudioContext doesn't really render the audio but rather generates it, as fast as it can, in a buffer.
(event)
The event is fired when the rendering of an is terminated.
The represents events that occur when the processing of an is terminated. The event implements this interface.

You can find a number of examples at our webaudio-example repo on GitHub.