Book a call
with @mahbodmoghadam

Genius started as a fun art project, but we started to take it seriously about 6 months after the launch, when we realized one of the most-searched words on all of google is “lyrics”. Although I spent the first 6 months creating rich analysis of the Biggie and 2Pac classics which I had pondered since my teenage years, the site actually got traction from random users transcribing and annotating lyrics to new songs. 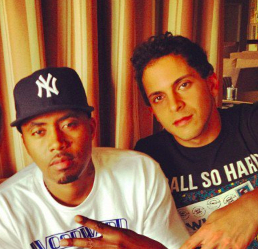 (Chillin with the Nasfather, one of our first angel investors)

One of the first songs that blew up was the “Beemer, Benz or Bentley Remix”, an obscure track Ilan’s friend had transcribed and annotated just as it was released.

Once my cofounders Tom and Ilan realized where the traffic comes from, they devised an ingenious scheme which I didn’t fully realize until about 2 years in, when we started raising money.

I kept working on hip-hop classics, giving invaluable exegesis — but they realized that the annotations were just a side-project designed to give our community the incentive to transcribe lyrics to new songs and debate the accuracy of the transcriptions.

"Transcribing lyrics is very difficult, especially rap lyrics. When we started Rap Genius, dominant lyrics sites like AZLyrics and MetroLyrics had horrible inaccuracies; most of their lyrics seemed to have been transcribed by someone with no knowledge of the artist, was not 100% fluent in English."

For hip-hop lyrics, which are far more intricate than pop songs, the big lyrics sites were a total disaster. For a lot of songs they simply didn’t have the lyrics — they had a stub that said “if you have a suggestion for the lyrics to this song, please email us”.

There was a site called KillerHipHop.com where this one cool British dude had taken it upon himself to give accurate transcriptions of new hit rap songs; at one point, around 2010, the Alexa rank of his site was in the top 2K globally… and he was just a one man show. That’s how big the market is for accurate rap lyrics.

Eventually, Rap Genius’ community became huge. KillerHipHop shut down — the British guy admitted our community was doing a better job. He is a G, love that guy.

The biggest part of Genius’ community is the participation of the “Verified Artists” — which was 100% my idea btw, not to brag… We got Nas, Pharrell and Eminem to angel invest and annotate their own lyrics. Rob Markman joined the company right after I left and he is friends with pretty much every rapper — he made Genius the go-to spot for artists who want to provide and annotate their own lyrics, which it is today.

Google’s corporate philosophy is that they are committed to putting the best content at the top of every search. That is their mission. I learned this in 2013, when they violated their mission in order to f**k with me.

Back then, Google banned Rap Genius for 10 days because I had sent an email to a blogger, telling him that I would share his posts on Rap Genius Twitter if he shared our annotations to the lyrics of Justin Bieber’s new album.

Honestly, I did nothing wrong. The blogger shared my email on Hacker News saying this was a smart SEO hack.

But for some reason, Google decided to retaliate, cause a huge news story, and alienate everyone in tech.

Their head of webspam, Matt Cutts — the guy who was in charge of banning Rap Genius — resigned several months later.

I’ve been told he was forced to resign, even though he was one of Google’s earliest executives, because of the unpopularity of what he did — Google’s search engineers were furious that Rap Genius was not showing up at the top of lyrics search results, even though we had by far the best content.

I wonder how those engineers feel about “Google Lyrics” as a whole. When Google started posting lyrics themselves 2 years ago, I remember being horrified.

But I thought that the engineers would put a stop to it for the same reason they made Matt Cutts resign — because they knew that Rap Genius has the best lyrics.

"We are the ones with a community of thousands debating and parsing the meanings, unearthing the mondegreens — we are the forum where artists themselves give the lyrics and ask for an interview where they can provide exegesis."

The scary part is, Google has done this before. Yelp is the “Rap Genius 1.0” — Google’s earliest victim. Putting up photos of shops and restaurants is difficult — just like transcribing rap lyrics — but Yelp was able to build a community that enjoyed doing it.

There aren’t that many of us, but I am personally an “Active Yelper” and I’m proud! I’ve Yelped over a hundred times. I have created joy and misery for business owners — I revel in the power.

Sometimes, I’ll show my nerdy friends my collection of Yelp badges on my profile. I’m not a big-timer or anything, in the grand scheme of things I am a mid-level Yelper at best — but Yelp knows I’m worth something.

I don’t understand — why would Google try to devalue this cool community by ripping off Yelp’s photos? Don’t they already make enough money? Where does this schizophrenia come from?

In light of Genius’ accusations yesterday, I saw the CEO of CelebrityNetWorth complaining that Google had scraped his site too. For him, I have little sympathy because CelebrityNetWorth is not a community, it is a shitty content farm.

Good riddance! Google can do whatever they want to him — but to communities like Yelp and Genius — where nerds like me take pride in their participation — scraping is a crime. I don’t know the laws of it or anything, but that’s how I feel philosophically.

The funny thing is, I’m currently building a company that is the new, decentralized version of Google. So the timing of this debacle feels like I’m in a movie.

I’m a big believer in the decentralized internet — that’s the purpose of my 2nd company (Everipedia) too. Communities like Genius and Yelp should decentralize — they are not perfect either. But at least they HAVE communities where people take pride in their work.

By ripping us off, Google is behaving like a scraper site content farm — the very antithesis of the values Google was meant to uphold.

Also, Google’s shitty PR tactic of passing the buck for plagiarizing lyrics onto LyricFind is truly debased. That’s like if Hitler was on trial and he said “I didn’t kill anyone — blame the concentration camp soldiers..”

And so, in conclusion, I would like to say, F**K YOU GOOGLE! I hope this is a repeat of 2013; I hope your own engineers get sick of your hypocrisy and force you to stop ripping off my site.

Related Stories
Subject Matter
Book a Demo. Ship Fast. Rest Easy. LaunchDarkly. by @LaunchDarkly
#promoted
The CEO of my company, Genius, must be Black by @mahbodmoghadam
#genius
Ditching Big Tech for a More Decentralised Life by @kaywoods
#facebook
SEMRush IPO Puts Digital Marketing in the Spotlight by @mikeyperes
#semrush
Mapbox Or Google Maps: Which One To Choose For Your App by @olgagalik
#google-maps
A Beginner's Handbook for Search Engine Optimization by @dimifn
#seo
Numbers Don't Lie But They Are Easily Misinterpreted All The Time by @doublex
#statistics