While the global economy is being severely impacted by the coronavirus crisis, we. at Sperax, a Silicon Valley-based blockchain company, are aiming to build a trusted infrastructure for a decentralized economy that provides far greater efficiency, flexibility and self-governance than the traditional economic model. The world needs decentralisation more than ever to bring everyone together, to collaborate and to share the value created.

We believe that blockchain technology is the key to decentralisation and will shift the way how people interact with one another and how money flows; we want to leverage on the powerful technology to drive further adoption, to enable more possibilities for builders and to improve lives.

At Sperax, we take a layered approach to solve the problem.

At the infrastructure layer, we developed BDLS protocol, which is an original consensus module more secure and efficient than other Byzantine Fault Tolerant protocols. On top of it, we introduced Sperax stable coin system. Backed by fiat currency, it is the first native stablecoin in public blockchain ecosystem. Developers could build decentralised applications without educating users about cryptocurrency.

There will be multiple stablecoins issued for different geographies. Sperax will not interact directly with end users but work with regulated financial service providers and OTC desks to provide liquidity for the token as well as to support cross-border transactions.

As compared to the decentralised stablecoins that are issued based on Ethereum, Sperax native stablecoins have less dependency on the external factors like protocol risks. If Ethereum is used as the sole collateral to a stablecoin system, the value of the system will crash if Ethereum is deemed of no value.

In the Sperax ecosystem, since the stablecoin is pegged to fiat reserve, the stability is always guaranteed. There will be a stabilization fee charged each time that users deposit fiat in exchange for stablecoins and it will be rewarded to financial nodes and also used for the buy back of SPA tokens.

Financial nodes in Sperax Financial Infrastructure serves as the issuer of stablecoins in different geographical areas and also the custodial facilities for the fiat currency in the reserve.

Being a financial node in the system requires licenses for handling fiat deposits as well as payment facilities.

With the financial partners in place to administer the issuance of stable currencies in the ecosystem, financial services could also be built on top of Sperax BDLS. The purpose is to enhance the currency feature of the Sperax stablecoin and to encourage users to be more actively engaged with the token usage.

Store of value and medium of exchange are both crucial features to the stablecoin. To achieve these, there could be decentralised financial service providers to facilitate loans and deposits and exchanges to enable the value transfer outside the ecosystem.

At base layer, Sperax provides a Proof of Stake (PoS) based blockchain with a BFT consensus protocol that prioritizes safety and liveness.

It’s here that we’ll begin our dissertation of the tricky challenges that follow, in a scenario where malicious nodes have maximum power.

1. It is hard to ensure unpredictability and verifiable fairness of node identity

In a PoS based consensus protocol, validators are selected to generate or vote for new blocks based off of whether they satisfy certain conditions. These conditions are generally determined by the coins each node controls on the network.

It is important to ensure the node will be selected with fairness, which is a difficult thing to realise in practice. This problem boils down to a more recognizable one-- that it is hard to get true randomness on the blockchain.

Although quantities like future block hashes, block difficulty, or timestamps seem to be ideal sources of randomness on chain, they are vulnerable to manipulation by miners. The randomness on the blockchain should be free from such control, but maintain the desirable properties of unpredictability and decentralization.

2. It is hard to design a secure protocol in the open internet Environment

In terms of absolute security, most mainstream BDLS protocols have a long way to go before they could be considered secure on open networks, as they apply the gossip-based broadcast protocol.

This is based on the existence of reliable peer-to-peer communication channels, for any pair of participants one might select This requirement is generally equivalent to a complete network topology requirement that only exists in closed environments.

Most importantly, this assumption is definitely not the case in more realistic scenarios on the open Internet , which are commonly susceptible to DoS attacks in today’s blockchain landscape. Sperax intends to make use of some of the advancements made in the open network landscape, and reshape them to serve similar purposes in blockchain networks.

3. It is hard to handle the problem of deadlock in a partial sync network

Liveness, while different from security, is important in a network because it guarantees that something will happen, while providing no guarantees about the time it might take for that thing to happen. This becomes relevant to consensus mechanisms, when we consider the fact that liveness guarantees all the nodes will eventually agree on some value and move on.

However, in the realistic network situation, many attacks can be launched in the format where a malicious leader can send different messages to different nodes. In this situation, several widely-used BDLS protocols in blockchains may reach deadlock when the network is partially synchronous.

This deadlock is not resolved when the network regains synchronization, meaning that the liveness property of these consensus algorithms is not robust enough to survive in a realistic Internet environment.

To mitigate these security flaws, the Sperax protocol, similarly to Libra, handles this in waves of synchronous and asynchronous stages. Our consensus algo was authored by Professor Yongge Wang.

Professor Wang has published over a hundred peer-reviewed scientific papers on cryptography, pseudorandomness, fault-tolerant computation, dependable distributed computation and secure communications. Most recently, he implemented the post-quantum cryptography encryption technique RLCE which was included in NIST for post-quantum cryptographic standards round 1 competition. His papers speak to his experience designing attacks against various blockchain protocols.

RANDAO not only has the characteristics of unpredictability which it inherits from the common random number generator, but it is also more accessible and provably fair. RANDAO’s protocol adopts a commit-reveal process that presents a joint random number, generated from the random strings committed by various participants in a given window of time.

One possible drawback of RANDAO is that the last user may influence the ending output RANDAO might present, because one can base his/her decision to reveal one’s number on the numbers others have revealed. However, threshold digital signature schemes solves this problem perfectly.

BLS is one of the threshold digital signature schemes that can be used to generate random numbers with multiple participants, where the goal is to provide users with random numbers in a more efficient way on the premise of verifiable fairness. For further information, please refer to the RANDAO whitepaper.

In particular, in the type II network which is a realistic representation of the Internet, Denial of Service (DoS) attacks are allowed and no reliable broadcast channels are assumed before GST. Furthermore, we may assume that the network alternates between good synchronous period and bad period.

In designing Sperax BDLS, we adopt block-lock mechanisms and block self-proof mechanisms to ensure security against such potential forks. Most importantly, the liveness and safety properties of Sperax BDLS protocol has been proved here.

Scalability is another angle from which to evaluate any blockchain system. All of today’s projects spare nothing to present their users with high performance. In PoS algorithm design, this desire for efficient consensus highlights the bottleneck of multiple communication processes.

Another way to evaluate efficient consensus is to understand the complexity of the messages passed. Although in general the performance of PoS consensus varies with the implementation, it can also be evaluated on the order of O(n2).

In terms of the communication processes in SperaxBDLS however, there are only two unicast and two broadcast processes, with a O(4n) message complexity, which contributes to a linear consensus efficiency. 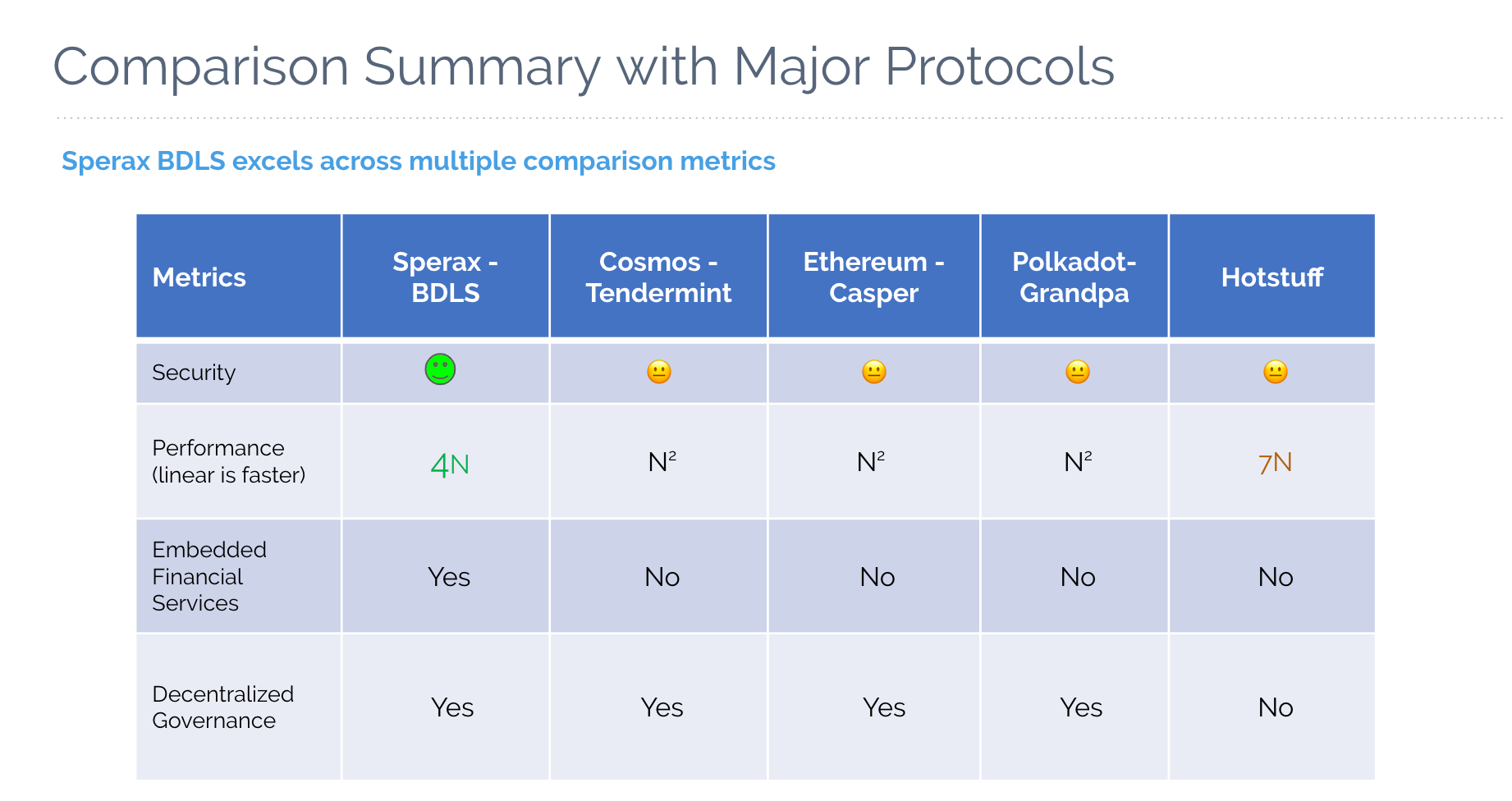 The Role of the User

The randomness used for determining whether a user is a potential leader or member is based on the following entropy: a random string that the user committed in a previous round, a joint random string output by the random beacon protocol (RANDAO + BLS signature scheme).

This user then propagates the message to the entire network. Since there may be several potential leaders, the verification committee is needed to determine the actual leader, and finalize a chosen block.

Each user is selected to the committee some fixed number of times, and with some probability, a subset of the online users are chosen to be verifiers. Then, in order for each user to mark a proposed block as the final block for this round, each user checks that this block has received signatures from ⅔ of the online verifier nodes.

Sperax BDLS is mathematically proven to provide an extra layer of security against DoS attacks in an asynchronous environment with fewer safety assumptions — such as on the open Internet. 2019 saw Sperax enthusiasts recognizing this potential at meetups with our current investors and partners, including Outlier Ventures, FBG Capital, Newstyle Capital, etc. We’re also proud that we’ve been able to partner with various portfolio companies in the China Academy of Science Holding (CASH), the largest state level tech investment firm.

We are always striving to foster healthy community discussions surrounding the benefits that Sperax presents to the PoS community, as well as the larger blockchain ecosystem.

At present, the Sperax project has established R&D teams in both China and the United States, carrying out collaborative development, researching key technologies, and simulating and testing key modules. We host meet-ups internationally, so please keep an eye out for a future one that might be near you!

How The Hotstuff Protocol is NOT Secure?

Token Swappers Are Replacing Traditional Crypto-Exchanges: A 2020 A...