Why You Should Care About Encryption

Nowadays, the news is full of data leaks, breaks, and hacks and one thing is clear - you don’t want to be the one who leaks all your customer data to some hackers on the internet. One of many ways of securing your application and your customer’s data is end-to-end encryption or (e2e encryption for short). This means that data gets encrypted as soon as possible on the user’s device, is sent encrypted over the wire, and only gets decrypted at the receiver’s device. This stands in contrast to the usual encryption at transport and encryption at rest which is used by most applications and is implemented at the protocol level (you just put SSL on your connection and no one can snoop on your data while in transport - isn’t that great?).
So which one to use?
Encryption at the protocol level (e.g. SSL encryption)
E2E-Encryption
So as both methods have their pros and cons, you should carefully consider which option to use. E2E encryption works great for very personal data (e.g. social security numbers, private messages, secure notes) while it becomes a really hard problem if you’re dealing with data you want to filter on the server side (server-side full-text search becomes impossible).

This post is based on a blog post at jensravens.com and describes a slightly simplified variant of end-to-end encryption we are using at covtrace.de to provide a secure environment for user data. If you would like to work with us in building your own React or Rails apps, contact us at https://nerdgeschoss.de.

How does E2E encryption work?

This post focusses on asymmetric encryption - which is just for a fancy word for saying that you can encrypt a message with a public key and decrypt it with a corresponding private key. Only the owner of the private key can decrypt a message, but everyone having access to his public keys can send him encrypted messages. A popular implementation is PGP which is mostly used to encrypt emails.

What we are going to build

To showcase several parts of e2e encrypted systems, we’re going to build a secure messaging app where users can send each other encrypted messages. The encryption is based on our work on CovTrace, a digital attendance list for restaurants during Covid19-times. Features include:

Even though a lot of things happen on the client, we are going to use a fully server-side rendered application:
This blog post will highlight the relevant parts of encryption and key management. You can find a fully working application at GitHub: https://github.com/JensRavens/rails-stimulus-e2e-encryption
This app is a simplified version we are running successfully for CovTrace in production.

This section deals with the Rails-side of things: models, controllers, keeping data where it should be. If you’re only interested in the encryption part, you can skip to the next section.
Let’s get started with s. Create a migration with  and modify it as follows:
As you can see the user has an array of (public) keys, so other users can send them encrypted messages. Let’s allow that user to login in: and suddenly your user can login and sign up. Let’s give him something to login to. Add some user routes to the (more about messages later):
and create the users controller:
Thanks to devise we get the  method and an filter for free and we can fully focus on our logic. The index page should have a list of all users that can be contacted (only users that have public keys can receive messages). Also, the update method allows adding additional keys via the  model:
Let’s build some basic UI for it in :
And with that we have a more or less functional UI (more on generating keys later): 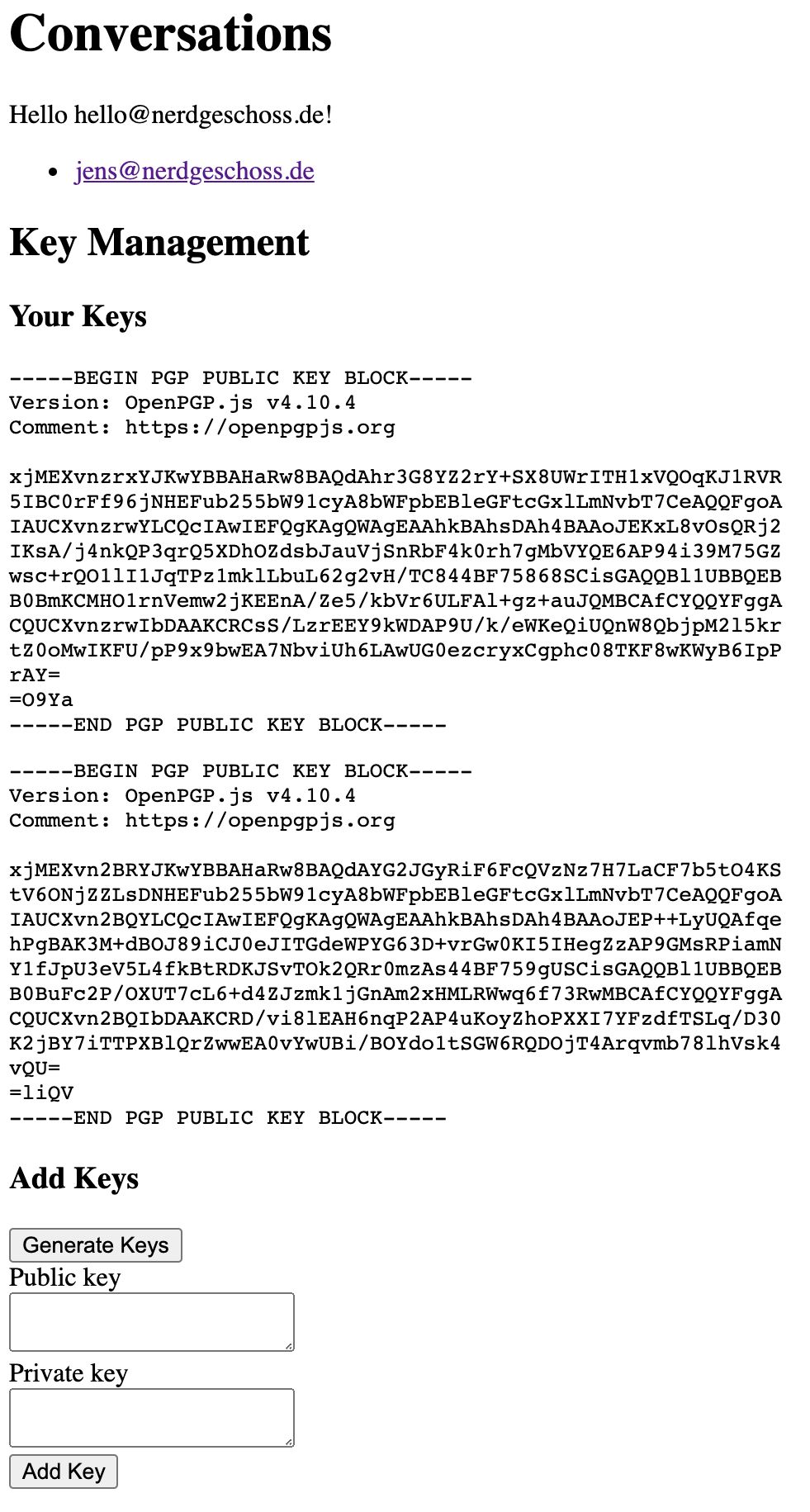 Great, let’s add some messages with  and modifying the migration as follows:
Messages have a sender and receiver and a text field to store the encrypted message and also a scope to retrieve the conversations a user is involved with:
Now let’s give the user a way to see messages that were received to so far:
This retrieves the user from the URL and all messages that have been exchanged between the current user and the selected user.
Again relatively straight forward: Iterate over all messages and display the creation date and add a form with the message content.
Also we need a corresponding controller to persist those messages:
This action will redirect to the receiver - which effectively reloads the page and shows the newly created message, which will look like this once we have some content: 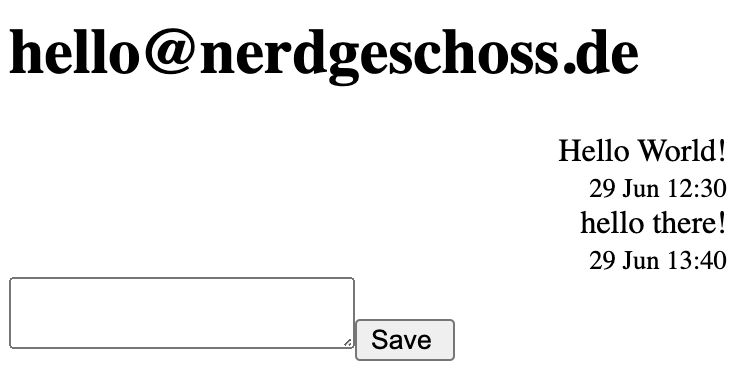 With the basic CRUD out of the way, let’s get to the interesting part - the encryption.

With the existing controller and UI the user could already create a key somewhere else and put it into the field. But to make things easier and more convenient, we’ll allow generating a key pair in the browser. For this, we will use Stimulus.js and https://github.com/openpgpjs/openpgpjs.
OpenPGP.js is quite a heavy dependency (it adds about 350kb to your bundle), so let’s load it asynchronously only if it’s needed. To better structure our frontend code, all encrypt/decrypt related code will go into .
Copy the openpgp.js code into  (as of the time writing, it doesn’t work yet as a yarn dependency with webpack) and implement a loading function:
This code uses an async import (isn’t modern javascript cool?), which will tell Webpacker to split the bundle into multiple chunks. This way the PGP library is only loaded if it is actually needed and will not block loading the page.
Now let’s allow the user to generate a keypair:
his makes sure the dependency is loaded before calling into PGP to generate a key. This code is using the  encryption curve, which is quite a recent addition that results in secure, but relatively short keys.
Let’s also add a message to persist a private key in the browser for later use:
So let’s wire it up to our UI. First, we add some fields to the view:
As you can see we add a keys stimulus controller around the form and a generate button to the top. It also wires the public key input to the controller and puts the private key as a target to the controller. Note how the private key’s name is set to : this prevents this field from being included into the request (remember: we want the private key never to touch our server - or it wouldn’t be an effective end to end encryption anymore). Also there’s an action on the submit button that will trigger the  method of our keys controller. Let’s write the controller:
And we’re done: with a click on the generate button, PGP will create a key pair and fill it into the text fields. When submitting the form, the client side will persist the private key in  while the server will add the public key to the user’s record (just keep in mind the  will always use rails UJS for form submission, so this form is an AJAX request). Now that we have keys, let’s send some messages!

Instead of sending the plain text content, we just want to send the encrypted version. Change the message form like this:
This adds an  controller and a corresponding keys-data entry with all public keys of the user (see key rotation in the closing notes about why this is a good idea). Also, we add a hidden field that will contain the encrypted content and set the  of the text area to  to prevent it from being submitted to the server. On change of the text area (which will be triggered when the user blurs from the field, e.g. by clicking the send button) it will call the  function.
Let’s start by implementing the business logic for this:
This function takes a simple text and turns it into an encrypted message that can only be read by the keys specified as an argument. As keys, we will use the keys of the receiver and the keys of the sender so both parties can see the messages history. Let’s wire it up with a Stimulus controller:
Now you should be able to send a message to another account already. If you look into the database, you will see that the content is encrypted:
It’s nice that we can send messages - but a bit pointless if no one can read them. Let’s fix this.

We’re almost there. Let’s start with the model this time:
Let’s add some controller annotations to our view:
This attaches every div to its own  instance. Also, it assigns the message content via a data attribute and defines a target where the content should go.
Time for the controller itself:
Reload your browser and you should see the decrypted message on the screen. Congratulations, you have a fully end-to-end encrypted messaging application! 🎉

You have seen how to generate and persist key pairs - the public key is persisted on the server while the private key stays within the browser. Also, you have seen how to encrypt a form with openpgp.js before sending it and decrypting the data during display.
The goal of this architecture is to stay as much Rails as possible - no client-side markup generation and keeping the scripts down to a minimum.
Here are some notes if you would like to implement end-to-end encryption with this tech stack in your own Rails application:
Getting basic end-to-end encryption running is easier than you might have guessed. While it adds the overhead of key management, the usage of encryption can be abstracted away. This way your user’s data will be safe, even if a hacker might get a copy of your whole database. And your users will thank you.
You got excited about full-stack Rails and would like to work on ideas like this? nerdgeschoss is hiring! We're also open for new projects currently, so just reach out to us if you need help building your next product.
Previously published at https://jensravens.com/e2e-encryption-with-rails/

Your Guide To the Best Forex Trading Platforms in 2020 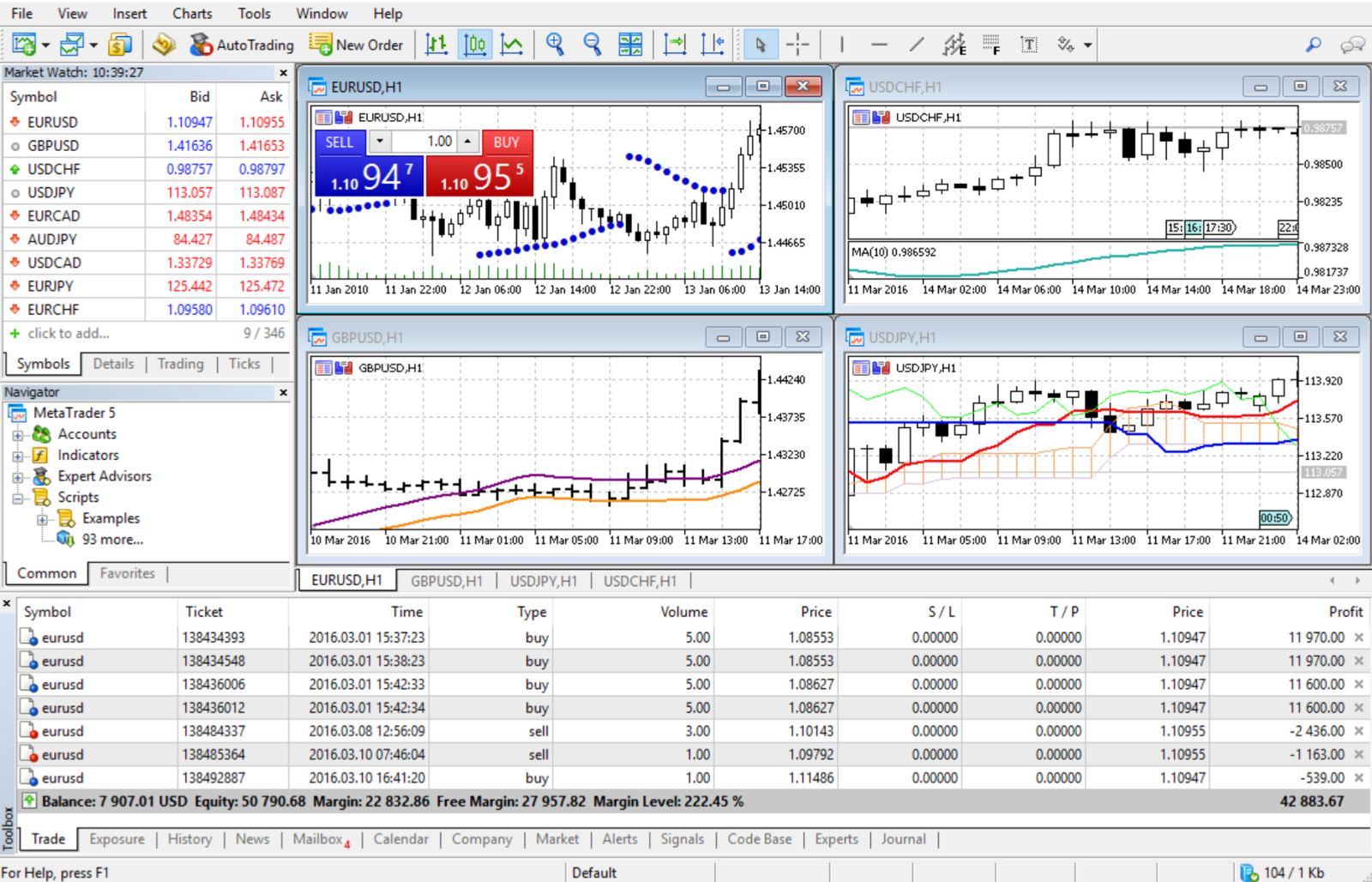 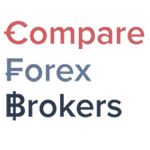 How To Populate Your Database with Fake Data: Ruby On Rails Tutorial 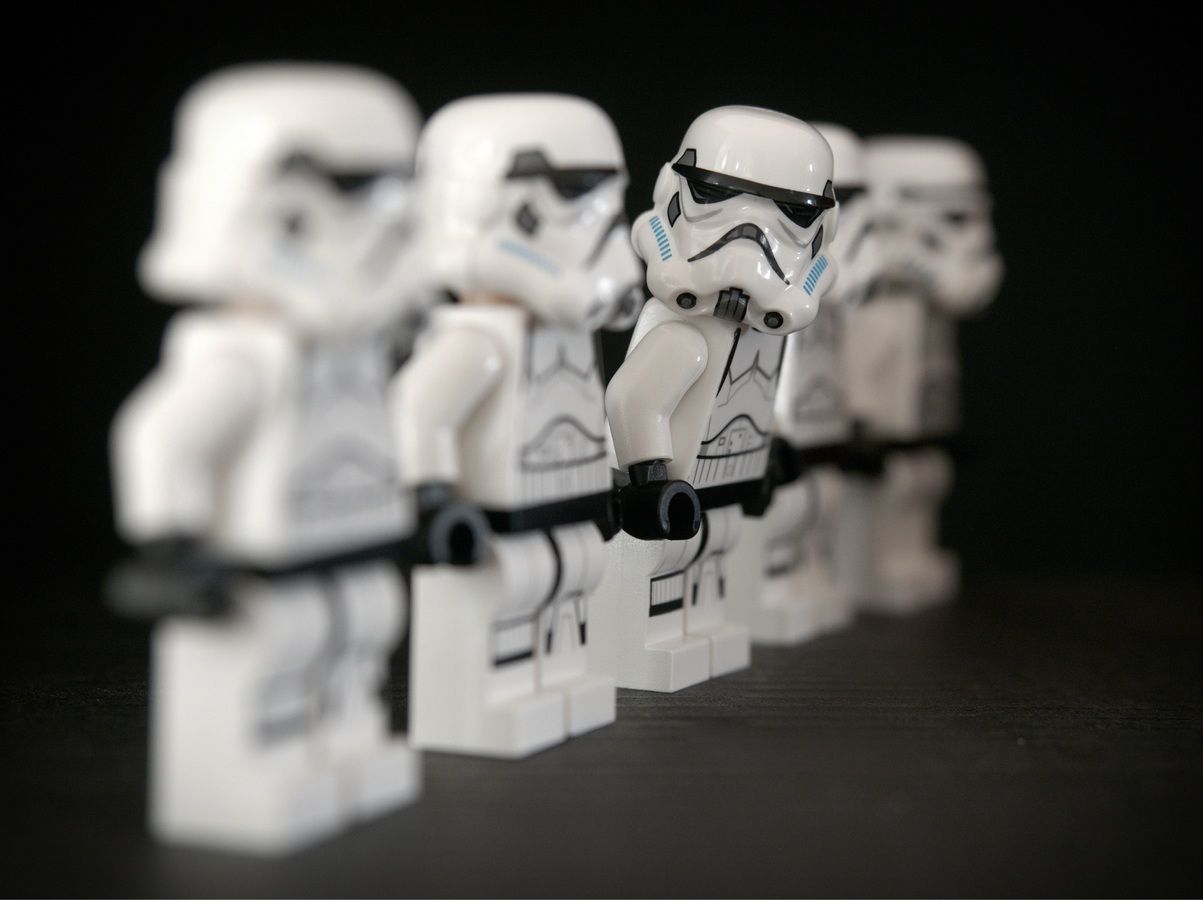